Cigarette smoking is associated with human cancers. It has been reported that most of the lung cancer deaths are caused by cigarette smoking 5,6,7,12. Although tobacco tars and related products in the particle phase of cigarette smoke are major causes of carcinogenic and mutagenic related diseases, cigarette smoke contains significant amounts of free radicals that are also considered as an important group of carcinogens9,10. Free radicals attack cell constituents by damaging protein structure, lipids and DNA sequences and increase the risks of developing various types of cancers. Inhaled radicals produce adducts that contribute to many of the negative health effects of tobacco smoke in the lung3. Studies have been conducted to reduce free radicals in cigarette smoke to decrease risks of the smoking-induced damage. It has been reported that haemoglobin and heme-containing compounds could partially scavenge nitric oxide, reactive oxidants and carcinogenic volatile nitrosocompounds of cigarette smoke4. A 'bio-filter' consisted of haemoglobin and activated carbon was used to scavenge the free radicals and to remove up to 90% of the free radicals from cigarette smoke14. However, due to the cost-ineffectiveness, it has not been successfully commercialized. Another study showed good scavenging efficiency of shikonin, a component of Chinese herbal medicine8. In the present study, we report a protocol for introducing common natural antioxidant extracts into the cigarette filter for scavenging gas phase free radicals in cigarette smoke and measurement of the scavenge effect on gas phase free radicals in mainstream cigarette smoke (MCS) using spin-trapping Electron Spin Resonance (ESR) Spectroscopy1,2,14. We showed high scavenging capacity of lycopene and grape seed extract which could point to their future application in cigarette filters. An important advantage of these prospective scavengers is that they can be obtained in large quantities from byproducts of tomato or wine industry respectively11,13

All solvents used in this work were reagent grade. The spin trap, including N-tert-butyl-α-phenylnitrone (PBN) and the standard spin label 2,2,6,6-tetramethyl-1-piperinyoxyl (TEMPO) were obtained from Sigma and were used as supplied. The plant antioxidants were obtained commercially from Swanson, Inc. USA.

2. Preparation of cigarette smoke and analysis of free radicals

Most of the free radicals in burning cigarette-produced smoke (gas phase) are instantaneous and unstable. In order to observe these radicals a spin trap technique is employed. It captures gas-phase free radicals by transforming them into a spin adduct which is more stable and can be detected by ESR (Fig.1). In the present study, the spin-trap solution of 0.05 M PBN was used to collect smoke gas phase free radicals, which are a mixture of oxygen- and carbon- centered radicals which are difficult to separate15. In our case, however, the observed hyperfine splitting constants aN = 13.7G and aH = 1.95G are very similar to the corresponding values for trapping adducts of alkoxyl free radicals (RO.)2, suggesting that they are the major product. We showed that weak ESR signals and low reproducibility observed in our initial measurements (Fig. 2) were due to the moisture in the smoke flow. To resolve this problem, we added a liquid nitrogen (LN2) trap between the Cambridge filter and the spin trap solution. The LN2 trap removed water from the MCS flow by quick freezing and capturing it on the inner wall of the glass tube. This greatly improved ESR signals and allowed for highly reproducible results (Fig. 3).

The amount of trapped free radicals was determined using a reference sample. For control samples without antioxidants, the typical adduct concentration in benzene estimated by comparison of its double integral spectrum with a double integral spectrum for known concentration of TEMPO was 1.24 μM (Fig.2). Since the amount of air passed through each cigarette during smoking was ~350 ml, this gives an estimate for the free radical concentration in the gas phase of MCS of ~7.1X10-9M, and a total number of radicals trapped from the gas phase of a whole cigarette of ~1.5X1015. An estimate for the total amount of free radicals in the smoke of a whole cigarette, including both gas and particulate phase, was ~1016 free radicals9.

Different levels of the scavenging effect of plant antioxidants on gas-phase free radicals in main stream cigarette smoke were observed. Their scavenging rates were presented in Fig. 4. Lycopene and grape seed extract showed the highest rates while lower rate was observed for pycnogenol (Fig.4). 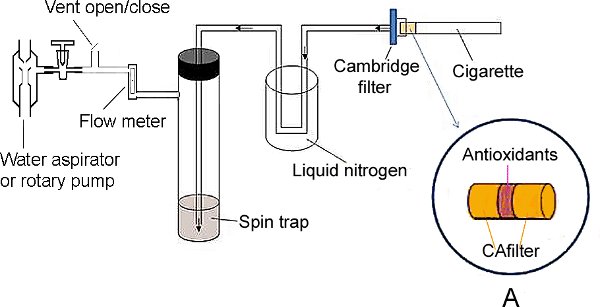 Figure 1. A diagram of improved smoking simulation design for collecting gas-phase free radicals in mainstream cigarette smoke (MCS) using spin trap. MCS was drawn by a water aspirator through CA filter, then Cambridge filter (yellow filter) and passed through a liquid nitrogen trap to remove H2O. The gas-phase products finally went to spin trap and bubbled through the spin trap solution. Plant antioxidant was placed between two pieces of conventional acetate filters (Enlarged in circle A) attached to cigarette to scavenge free radicals in MCS. 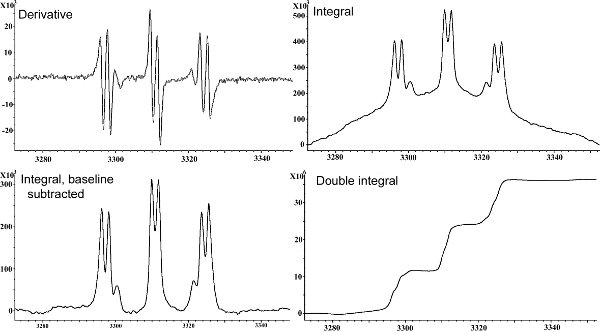 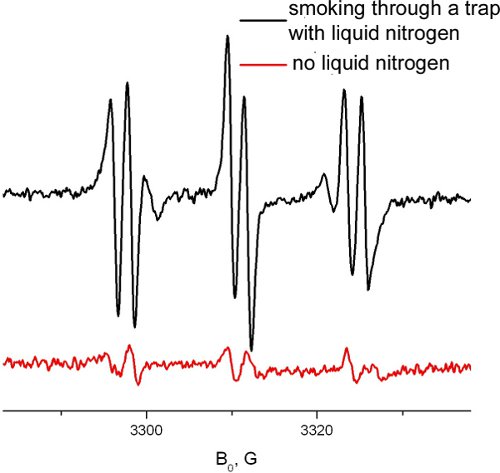 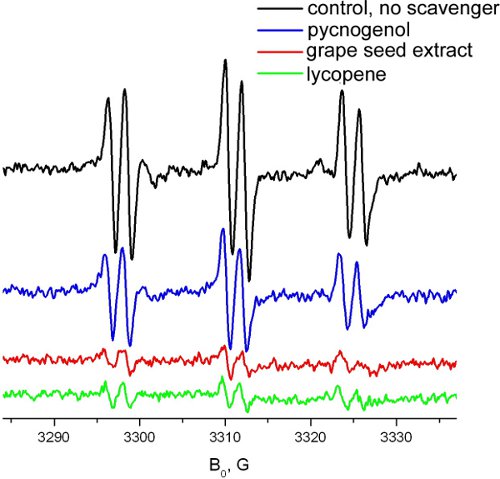 A reliable estimate of the effect of different free-radical scavengers in tobacco smoke requires a reproducible technique for quantitative detection of free radicals. Previously1, it has been shown that small volumes of higher concentration spin trap solutions in non-polar solvents are most effective at trapping free radicals from tobacco smoke. Cigarette smoke always contains water vapor from combustion of organic compounds and the residual moisture in tobacco which can end up in the trapping solvent. This admixture of water in the PBN spin trap solution substantially decreases the lifetime of the spin trapping adducts and the intensity of their ESR signals. Removing this moisture by simple passing MCS through a U-shaped tube cooled with liquid nitrogen dramatically improved the quality of ESR spectra in our experiments, even though some fraction of gas-phase radicals might be also trapped on the frozen surface.

Using this technique we compared relative efficiency of different radical-scavenging natural compounds introduced into cigarette filters. We found that lycopene and grape seed extract immediately after incorporating into cigarette filters are able to scavenge up to 90% of free radicals from the gas phase MSC. Such high scavenging capacity ranks these cheap readily available natural compounds among the most efficient reported free radical protectors like haemoglobin and shikonine8,14. Yet, in our experiments cigarette filters loaded with studied natural antioxidants lost a noticeable part of their scavenging capacity after a week of storage at room temperature. Solving this problem can stimulate future application of lycopene and grape seed extract in commercial cigarette filters.

This work was supported by the National Institute of Health, grant No. NIH/NCRR P41-RR 016292 (for ACERT). 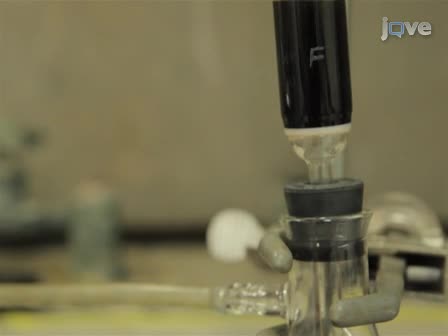