Foods that are rich in fat and sugar significantly contribute to over-eating and escalating rates of obesity. The consumption of palatable foods can produce a rewarding effect that strengthens action-outcome associations and reinforces future behavior directed at obtaining these foods. Increasing evidence that the rewarding effects of energy-dense foods play a profound role in overeating and the development of obesity has heightened interest in studying the genes, molecules and neural circuitry that modulate food reward1,2. The rewarding impact of different stimuli can be studied by measuring the willingness to work to obtain them, such as in operant conditioning tasks3. Operant models of food reward measure acquired and voluntary behavioral responses that are directed at obtaining food. A commonly used measure of reward strength is an operant procedure known as the progressive ratio (PR) schedule of reinforcement.4,5 In the PR task, the subject is required to make an increasing number of operant responses for each successive reward. The pioneering study of Hodos (1961) demonstrated that the number of responses made to obtain the last reward, termed the breakpoint, serves as an index of reward strength4. While operant procedures that measure changes in response rate alone cannot separate changes in reward strength from alterations in performance capacity, the breakpoint derived from the PR schedule is a well-validated measure of the rewarding effects of food. The PR task has been used extensively to assess the rewarding impact of drugs of abuse and food in rats (e.g.,6-8), but to a lesser extent in mice9. The increased use of genetically engineered mice and diet-induced obese mouse models has heightened demands for behavioral measures of food reward in mice. In the present article we detail the materials and procedures used to train mice to respond (lever-press) for a high-fat and high-sugar food pellets on a PR schedule of reinforcement. We show that breakpoint response thresholds increase following acute food deprivation and decrease with peripheral administration of the anorectic hormone leptin and thereby validate the use of this food-operant paradigm in mice.

When testing the ability of food deprivation to modulate breakpoint responding on a PR schedule of reinforcement, we expect to significantly increase breakpoints as shown in Figure 1. In this experiment a 24 h period of food deprivation produced a ~3.6-fold increase in breakpoints as compared to those obtained in the free-feeding baseline state thereby suggesting that food deprivation increases the rewarding effects of food. In contrast, peripheral administration of the anorectic hormone leptin (5 mg/kg, IP) one hour prior to testing should decrease breakpoint responding as shown in Figure 2. 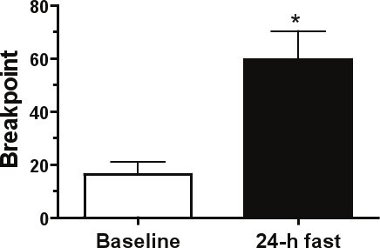 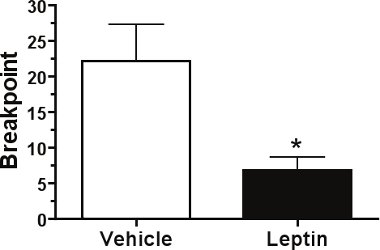 Operant conditioning tasks provide an effective means to evaluate changes in the motivational properties of food. The experimental procedures detailed in the present article permit training mice to lever press for food rewards and stably respond on a PR schedule of reinforcement.

Measuring the amount of food consumed does not provide the same readout as effort-based response measures since not all factors that affect food intake modulate the rewarding effects of food. For example, depleting utilizable glucose by peripheral 2-deoxyglucose administration in rats increases the amount of freely available food consumed but fails to alter break points in a PR task for food12. PR breakpoint responding can also reflect changes in the quality of food rewards. For example, break points are positively correlated with sucrose concentration demonstrating that motivation for sucrose increases in a manner that follows sweet taste8. Here we demonstrate that 24h food deprivation substantially increases PR breakpoints for HFHS food in mice. In contrast, we found that peripheral administration of the anorectic hormone leptin significantly decreases breakpoints for HFHS food in mice. These findings are consistent with previously reported actions of food deprivation and leptin on reward thresholds in rats12-14.

When using this protocol it is important to keep in mind that acquisition of food-maintained operant responding is significantly enhanced by regular training (every 1-2 days) and by increasing the motivational state of the mouse by implementing a food restriction regimen. In addition, ensuring that mice exhibit relatively stable responding on one reinforcement schedule before moving on to more complex schedules (e.g, FR1 to FR5) is key to minimizing variable performance during testing. Despite the application of these steps, it is not unusual to obtain some variability especially between different mice. For this reason, it is highly recommended to use a within-subjects (repeated measures) design when possible to remove across subject variability. Although within-subject testing is not possible for investigating stable genetic modifications (i.e., knockout versus control mice) it can be used to examine the influence of drugs, lesions or acute genetic (e.g., optogenetic) manipulations.

Obesity and obesity-related illnesses are a growing problem that has increased the urgency to identify the molecules and neural pathways involved. Accumulating evidence highlights the important role of brain reward circuitry in food craving, increased caloric intake and weight gain. The PR task is a valuable tool for measuring the impact of neurobiological, genetic or pharmacological manipulations on the rewarding effects of food.

Production and Free Access of this video-article is sponsored by Med Associates, Inc.

This project was supported by grants from the Natural Sciences and Engineering Research Council of Canada (355881) and the Canadian Foundation for Innovation. 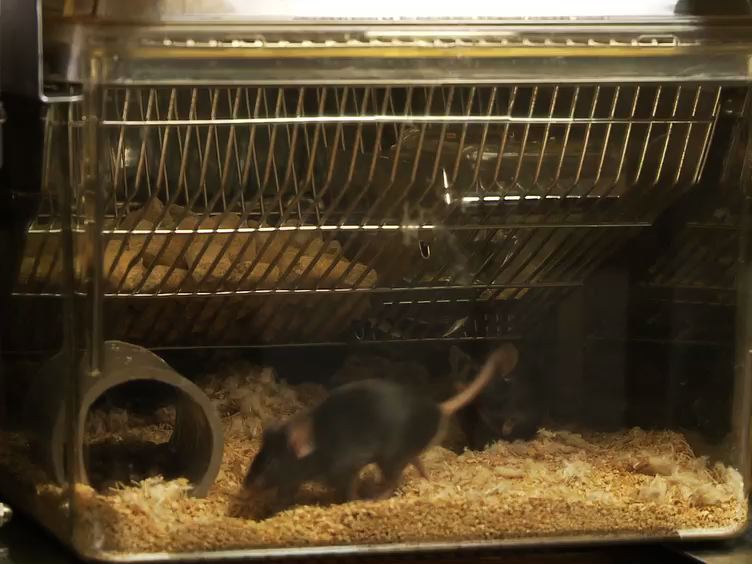