Video-oculography is a very quantitative method to investigate ocular motor performance as well as motor learning. Here, we describe how to measure video-oculography in mice. Applying this technique on normal, pharmacologically-treated or genetically modified mice is a powerful research tool to explore the underlying physiology of motor behaviors.

Eye movements are very important in order to track an object or to stabilize an image on the retina during movement. Animals without a fovea, such as the mouse, have a limited capacity to lock their eyes onto a target. In contrast to these target directed eye movements, compensatory ocular eye movements are easily elicited in afoveate animals1,2,3,4. Compensatory ocular movements are generated by processing vestibular and optokinetic information into a command signal that will drive the eye muscles. The processing of the vestibular and optokinetic information can be investigated separately and together, allowing the specification of a deficit in the oculomotor system. The oculomotor system can be tested by evoking an optokinetic reflex (OKR), vestibulo-ocular reflex (VOR) or a visually-enhanced vestibulo-ocular reflex (VVOR). The OKR is a reflex movement that compensates for "full-field" image movements on the retina, whereas the VOR is a reflex eye movement that compensates head movements. The VVOR is a reflex eye movement that uses both vestibular as well as optokinetic information to make the appropriate compensation. The cerebellum monitors and is able to adjust these compensatory eye movements. Therefore, oculography is a very powerful tool to investigate brain-behavior relationship under normal as well as under pathological conditions (f.e. of vestibular, ocular and/or cerebellar origin).

Genetically modified mice are nowadays widely available and they form an important source for the exploration of brain functions at various levels10. In addition, they can be used as models to mimic human diseases. Applying oculography on normal, pharmacologically-treated or genetically modified mice is a powerful research tool to explore the underlying physiology of motor behaviors under normal and pathological conditions. Here, we describe how to measure video-oculography in mice8.

The following experiments were conducted in accordance with The Duch Ethical Committee for Animal Experiments.

The independent control over the turntable and the surrounding screen enables us to confront the mice with a mismatch between visual and vestibular information. After a long-term and uniform exposure of mismatched visual and vestibular information, the VOR of the mouse will change to compensate for the altered visual input (VOR adaptation; Movie 4). Rotating the turntable out of phase (i.e. 180°) with the surrounding screen (1 Hz, 1.6°) increases the VOR gain (Figure 5B). The maximal change in VOR gain, when using a one trial learning paradigm, is often reached after 30 minutes. 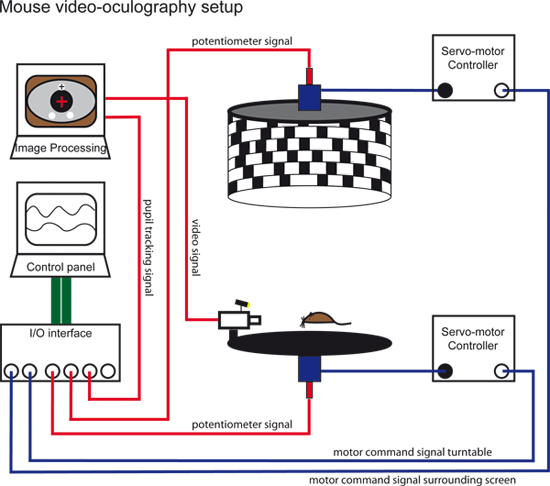 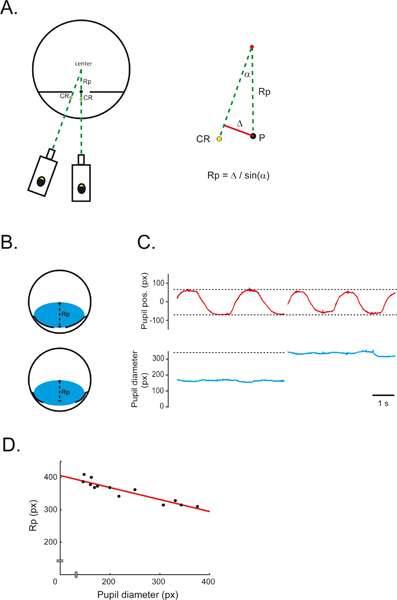 Figure 3. Calibration of the video pupil-tracking system. A) The camera is rotated several times by +/- 10° (i.e. 20 degrees peak to peak) around the vertical axis of the turntable. The tracked pupil (P) and the reference corneal reflection (CR) recorded in the extreme positions of the camera rotation are used to calculate the radius of rotation of the pupil (Rp). B) The radius of the pupil diameter is dependent on the size of the pupil. C) Example showing the effect of pupil size on pupil position during the calibration procedure (both measured in pixels (px)). D) Relationship between Rp and pupil diameter measured in a single mouse. The thirteen different pupil diameters were accomplished by altering the intensity of the surrounding light. 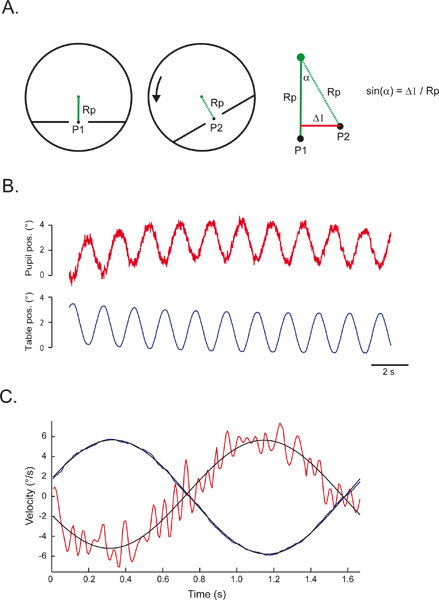 Figure 4. Measuring and analyzing eye movements using video pupil-tracking. A) The angular pupil position is calculated from radius of the pupil (Rp) and the position of the Pupil (P; corrected for CR position). B) Example of compensatory eye movement induced by stimulating the vestibular and visual system (visual enhanced VOR). The turntable was rotated sinusoidally at 0.6 Hz with an amplitude of 1.6°, while the surrounding screen was well-illuminated. C) Analyses of the recording shown in B). Graph shows the averaged velocity trace of the turntable (blue) and pupil (red). These averaged traces were fitted with a sinusoidal function (black). 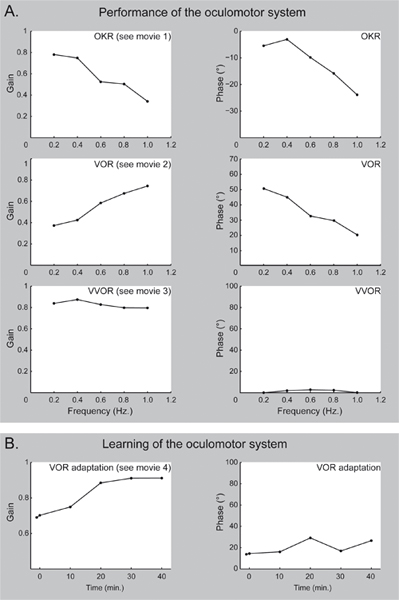 Figure 5. Performance and learning of the oculomotor system measured in one C57Bl6 mouse. A) Eye movements are generated by rotations of the surrounding screen (optokinetic reflex: OKR, top panels), by rotating the mouse in the dark (vestibulo-ocular reflex: VOR, middle panels) and by rotating the mouse in the light (visually-enhanced vestibulo-ocular reflex: VVOR, bottom panel) with frequencies ranging from 0.2 to 1.0 Hz at an amplitude of 1.6°. The gain of the reflex was computed as the ratio of eye velocity to stimulus velocity (left panels) and phase of the reflex was computed from the phase difference between the eye velocity and stimulus velocity (right panels). B) Motor learning was accomplished by adaptively increasing the VOR using an out of phase training paradigm. The mouse was subject to a visuovestibular training paradigm in which the rotation of the mouse was out of phase (180°) with the rotation of the surrounding screen (both rotating at 1.0 Hz, 1.6°) for forty minutes. Every 10 minutes the VOR was tested (1.0 Hz, 1.6°). In this mouse the out of phase training increased the VOR gain.

When designing an eye movement experiment, the following factors need to be taken into account or controlled for because they are known to affect the eye movement response: age13,18, gender14 and strain15,16,19. Furthermore, the experimental animal should have pigmented irises since pupil detection and tracking is impossible when the contrast between pupil and iris is too low, like in the BALB/c mouse. Extremely nervous or anxious animals need to be trained, prior to the experiment, to get used to the experimental set up and the restrained condition. This animal handling procedure results in less closure or semi-closure of the eyes and prevents the generation of eye fluids during the experiment, and consequently a better pupil tracking is accomplished.

Finally, acquiring and analyzing the data requires two to three hours per animal. Therefore, eye movement recordings will likely remain a specific procedure applied to selected mice and is not suitable as a high throughput screening test. 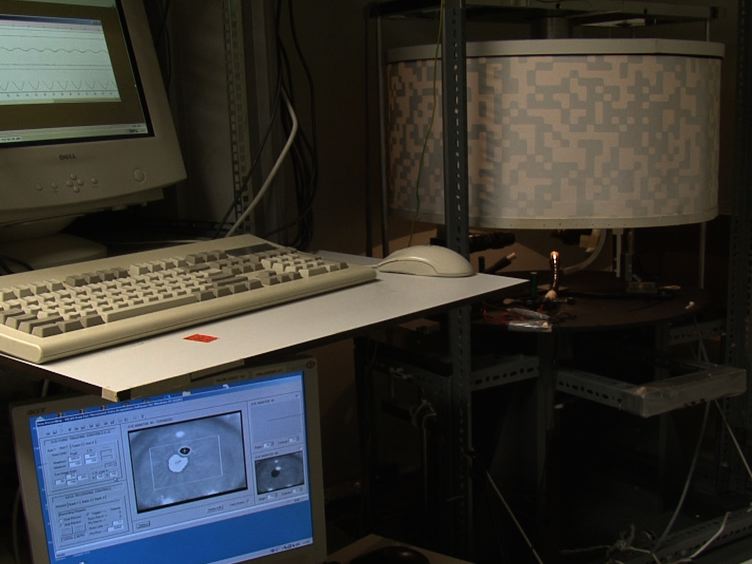