Conjoining different semiconductor materials in a single nano-composite provides synthetic means for the development of novel optoelectronic materials offering a superior control over the spatial distribution of charge carriers across material interfaces. As this study demonstrates, a combination of donor-acceptor nanocrystal (NC) domains in a single nanoparticle can lead to the realization of efficient photocatalytic1-5 materials, while a layered assembly of donor- and acceptor-like nanocrystals films gives rise to photovoltaic materials.

Initially the paper focuses on the synthesis of composite inorganic nanocrystals, comprising linearly stacked ZnSe, CdS, and Pt domains, which jointly promote photoinduced charge separation. These structures are used in aqueous solutions for the photocatalysis of water under solar radiation, resulting in the production of H2 gas. To enhance the photoinduced separation of charges, a nanorod morphology with a linear gradient originating from an intrinsic electric field is used5. The inter-domain energetics are then optimized to drive photogenerated electrons toward the Pt catalytic site while expelling the holes to the surface of ZnSe domains for sacrificial regeneration (via methanol). Here we show that the only efficient way to produce hydrogen is to use electron-donating ligands to passivate the surface states by tuning the energy level alignment at the semiconductor-ligand interface. Stable and efficient reduction of water is allowed by these ligands due to the fact that they fill vacancies in the valence band of the semiconductor domain, preventing energetic holes from degrading it. Specifically, we show that the energy of the hole is transferred to the ligand moiety, leaving the semiconductor domain functional. This enables us to return the entire nanocrystal-ligand system to a functional state, when the ligands are degraded, by simply adding fresh ligands to the system4.

To promote a photovoltaic charge separation, we use a composite two-layer solid of PbS and TiO2 films. In this configuration, photoinduced electrons are injected into TiO2 and are subsequently picked up by an FTO electrode, while holes are channeled to a Au electrode via PbS layer6. To develop the latter we introduce a Semiconductor Matrix Encapsulated Nanocrystal Arrays (SMENA) strategy, which allows bonding PbS NCs into the surrounding matrix of CdS semiconductor. As a result, fabricated solids exhibit excellent thermal stability, attributed to the heteroepitaxial structure of nanocrystal-matrix interfaces, and show compelling light-harvesting performance in prototype solar cells7.

7. Preparation of TiO2 on FTO/Glass Substrates

8. Spin Coating PbS/CdS into a Film

The evolution of the absorption and emission spectra corresponding to ZnSe/CdS/Pt NCs during each step of the synthesis is tracked in Figure 1. It can be seen that Figure 1b expresses absorbance peaks at ~350 nm and ~450, characteristic of ZnSe and CdS respectively, and, most notably, now displays the onset of a FL peak at ~550 nm. This FL feature is a result of emissive excitonic decay across the ZnSe/CdS interface. This type II interdomain FL is then quenched by the growth of the Pt tip (Figure 1c), due to the rapid injection of the delocalized electron into the metal moiety. This ultra-fast charge separation enables the utilization of the electron for the photocatalytic reduction of water. Hydrophilic MUA ligands are then added to facilitate the removal of the hole from the ZnSe domain, increasing stability by inhibiting oxidation of the semiconductor core, allowing for the sustained reduction of solar H2 (Figure 2). As a result of hole scavenging, the organic ligands become susceptible to photodegradation, but this can be simply mitigated by the addition of fresh ligands, as seen in Figure 2. Thus, the introduction of hydrophylic ligands not only render the NCs water soluble, but they also adjust the energetics of the system to protect the nanostructure at the cost of the inexpensive, easy to replace organic surfactants.

For PbS/CdS nanocrystal solids, Figure 3a and 3b shows a schematic of the fabrication process and the final device. Figure 3c, a TEM image of the core/shell nanocrystals, shows that the CdS infiltrates evenly around the PbS core. The nanocrystal solid is shown to be relatively free of pores in Figure 3d, an SEM image of the cross-section of a device. One result of the shell growth, that is observable, is a blueshift in both the absorbance and emission peaks. This shift is attributed to the PbS core shrinking as the Cd ions infiltrate further into the core, and can be seen in Figure 4. A large increase in the emission can also be seen in Figure 4, due to the enhanced quantum confinement provided by the CdS shell. The CdS layer not only increases the emission, it also protects the core, increasing the thermal stability of the solid, up to almost 200 °C, almost 50 °C higher than a PbS nanocrystal solid alone. Solar cells constructed using this nanocrystal solid architecture have not only shown better thermal stability, but have also been shown to have higher open circuit voltages (as high as 0.7 V) than the related organically linked films. These films have also shown a much higher tolerance to oxygen atmospheres, lasting for several days in normal atmospheric conditions with no degradation. 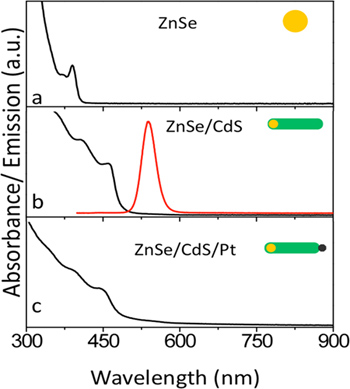 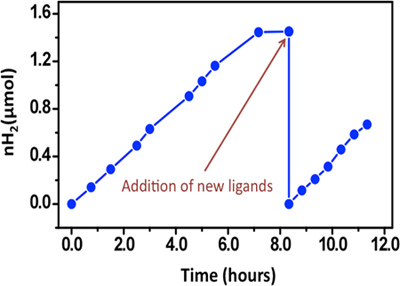 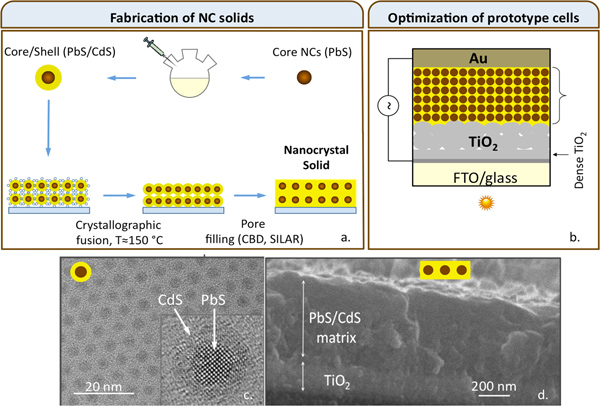 Figure 3. Schematic representation of (a) the steps involved in fabrication of Nanocrystal solids and (b) the final photovoltaic device. Below are SEM images of (c) PbS/CdS core/shell nanocrystals and (d) a side view of the nanocrystal solid. 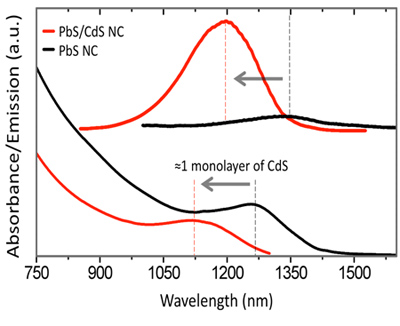 Figure 4. Changes in the absorption (bottom) and emission (top of PbS NCs resulting from the deposition of approximately 1 monolayer of the CdS shell. The shrinking of the PbS core from the cation exchange is reflected as a ≈150 nm shift in both spectra. The PbS fluorescence intensity is enhanced due to the formation of type 1 heterostructure.

This study demonstrates how composite architectures of inorganic nanocrystals can be employed to achieve a spatial separation of photoinduced charges. In particular, these composites allow fine-tuning of the distribution of charges across the two domains, which are then available to perform either photocatalytic or photovoltaic function. For instance, efficient photocatalysts can be made if donor and acceptor nanocrystal domains are built into a single nanoparticle. The energetics of such a system is shown in Figure 5. Meanwhile, stacking of donor- and acceptor nanocrystal films can lead to photovoltaic materials.

As an example of charge separating nanocrystals, ZnSe/CdS/Pt dot-in-a-rod metal tipped hetero-nanostructures were designed for the efficient splitting of H2O. By fabricating a structure with an intrinsic linear potential gradient, we enable the spatial separation of charges such that electrons and holes become localized in the domains of Pt and ZnSe, respectively. The energy of the excited electron can then be employed for the photo-induced reduction of protons in water, while the hole is injected into the surfactant molecule, maintaining the functionality of the nanocrystal. In this configuration, the ligand degradation presents a limitation on the system performance. Therefore, fresh ligands must always be available for the H2production to be sustained where excess ligands in the aqueous medium will automatically replace damaged ligands. We expect that the use of re-chargeable, electron-donating ligands may significantly improve the turnover numbers of photocatalytic composites utilizing charge-separating semiconductor hetero-interfaces. The device may potentially be improved by growing a thinner CdS shell over the ZnSe core, minimizing the barrier for the holes ejected from the ZnSe domain, or by choosing a surfactant with a slightly higher HOMO level, thereby making the ejection of holes from ZnSe more energetically favorable.

The nanocrystal solid procedure enables the assembly of nanocrystals into an all-inorganic inorganic film. This methodology is designed to overcome the key limitations of the ligand linked nanocrystal films, namely poor thermal and chemical stability of the ligand-nanocrystal system. This is done by encasing the nanocrystal array into a matrix of a wide-band gap semiconductor. Fabricated films exhibit good thermal stability, which is attributed to the heteroepitaxial structure of nanocrystal-matrix interfaces. Here, we employ a CdS matrix to encapsulate a PbS nanocrystal array, such that the quantum confinement of incorporated nanocrystals is preserved. The inter-nanocrystal spacing can be controlled via the thickness of the wide bandgap semiconductor shell, affecting the conductivity of the film. This allows for very different devices to be made from the same type of nanocrystal structure. Films with smaller inter-nanocrystal spacing show compelling light-harvesting performance in prototype solar cells, with efficiencies recorded as high as 2.3%. In theory a film with greater nanocrystal separation could be used for devices such as an infrared emitter, and other fluorescent solids. It is expected that the matrix-encapsulation approach could be extended to other type I semiconductor/matrix combinations to aid the "bottom-up" development of all-inorganic nanocrystal films showing more adjustable carrier mobility, quantum confinement of incorporated charges, and compelling air-stability.

We would like to acknowledge Dr. Felix Castellano (BGSU) and N. R. Neal for advice and valuable discussions. We gratefully acknowledge OBOR "Material Networks" program and Bowling Green State University for financial support. This work was partly supported by the NSF under Award CHE - 1112227.