The adult lung is perfused by both the systemic bronchial artery and the entire venous return flowing through the pulmonary arteries. In most lung pathologies, it is the smaller systemic vasculature that responds to a need for enhanced lung perfusion and shows robust neovascularization. Pulmonary vascular ischemia induced by pulmonary artery obstruction has been shown to result in rapid systemic arterial angiogenesis in man as well as in several animal models. Although the histologic assessment of the time course of bronchial artery proliferation in rats was carefully described by Weibel 1, mechanisms responsible for this organized growth of new vessels are not clear. We provide surgical details of inducing left pulmonary artery ischemia in the rat that leads to bronchial neovascularization. Quantification of the extent of angiogenesis presents an additional challenge due to the presence of the two vascular beds within the lung. Methods to determine functional angiogenesis based on labeled microsphere injections are provided.

Systemic angiogenesis in the lung is well-recognized. In disease states such as asthma 2, interstitial pulmonary fibrosis 3, cancer 4, and chronic pulmonary thromboembolism 5, the systemic vasculature in and surrounding the lung proliferates and invades the pulmonary parenchyma. However, animal models to study this differential activation of the systemic rather than the pulmonary circulation are few. Perhaps the most reproducible model of systemic neovascularization in the lung of the adult mammal is that which occurs after inducing chronic pulmonary artery ischemia. The response to left pulmonary artery obstruction in humans 5-7, dogs 8, pigs 9, sheep 10, guinea pigs 11, rats 1, 12, 13, and mice 14 is the rapid proliferation of the bronchial artery as well as intercostal arteries. The mechanisms responsible for systemic neovascularization of the lung after pulmonary ischemia are largely unknown and have not been widely studied. The time course of bronchial angiogenesis in the rat after left pulmonary artery obstruction has been carefully described in the histologic work of Weibel 1. Extending this work in the rat, our laboratory has focused on both the growth factors important in this process as well as the physiologic outcome of this neovasculature in the lung. Results demonstrate the CXC chemokine CINC-3 is elevated early after ischemia and treating rats with a neutralizing antibody to CXCR2, the receptor for CINC-3, attenuates angiogenesis 13. The newly established bronchial vasculature 14 days after the onset of pulmonary ischemia was shown to be abnormal with significantly increased protein permeability 15. Left lung function was not normal showing decreased diffusing capacity and a decrease in lung volume 15. Although the neovasculature may have contributed to the preservation of lung tissue during chronic pulmonary ischemia, it appears not to be normal and may contribute to a sustained decrease in pulmonary function.

Perhaps one of the most curious aspects of this model relates to the spatial distribution of proliferating blood vessels. Despite the release of growth factors within the pulmonary parenchyma due to ischemia, the neovasculature originates in relatively large upstream bronchial arteries. The normal bronchial artery arises as a small branch from the aorta and invades the airway tree at the carina. Thus the mechanism by which growth factors induce the initial phase of arteriogenesis is not clear. We suggest that the rat, with a vascular anatomy similar to humans, provides a unique opportunity to study the mechanisms responsible for systemic angiogenesis during pulmonary ischemia. Although complete obstruction of the left pulmonary artery is a rare occurrence in human subjects, increased bronchial vascularity appears to be similarly induced in patients whatever the site and size of pulmonary artery obstruction 16. Thus, we provide a detailed description of the surgical approach to ligate the left pulmonary artery in rats and a means to quantify the magnitude of angiogenesis.

All protocols performed on rats have been approved by the Johns Hopkins University Animal Care and Use Committee and in accordance with NIH guidelines. Whenever possible, the animal should be surgically prepped in an area separate from the surgical area to minimize contamination of the surgical site.

To assess the magnitude of bronchial perfusion of the ischemic left lung at desired time points after left pulmonary artery ligation, inject labeled microspheres through the left carotid artery into the aortic arch. Prepare rats as above 1-2.

Vascular cast: Results of the effects of left pulmonary artery ischemia in the rat are depicted in Figure 1. Shown is a methacrylate cast of the bronchial vasculature and the extensive vascularity of the left airway tree 28 days after LPAL. To obtain this cast, the systemic vasculature was injected with a methacrylate mixture (red), retrograde into the descending aorta and the trachea was cannulated and injected with a white silicon based material. This vascular cast provides a remarkable visualization of bronchial angiogenesis in the lung. Especially noteworthy are the large, tortuous upstream bronchial vessels of the left lung. Although not shown in this image, the right bronchus is essentially devoid of large vessels except for the normal, lone, right bronchial artery.

Functional angiogenesis: To assess the magnitude of systemic perfusion of the left lung through the bronchial arteries, fluorescent microspheres were infused into the occluded left carotid artery such that all microspheres mixed in the aortic arch as part of the cardiac output. Fluorescence from this size of microsphere (15 μm) was virtually undetected in the left lung of naïve rats. However there was a substantial, significant and consistent level measured in the left lung from rats studied 14 days after LPAL. 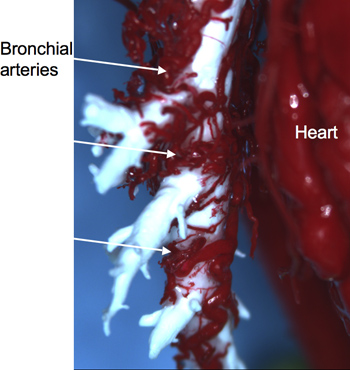 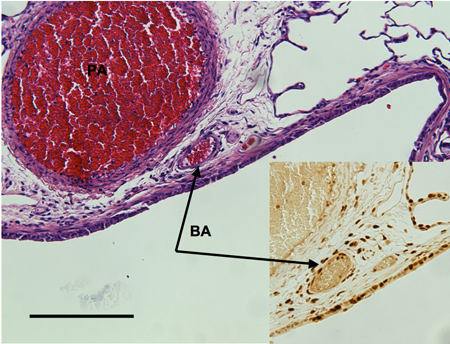 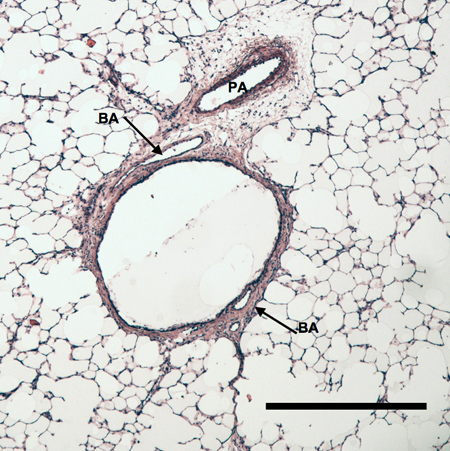 Figure 2B. Left lung section taken from rat 14 days after LPAL. Note the substantial increase in the size of the bronchial arteries. Distance bar indicates 500 μm. 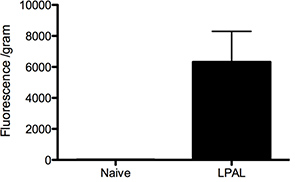 Left pulmonary artery ligation in all species tested leads to robust systemic neovascularization of the ischemic lung. We have presented the details of the surgical approach in a rat model. Our results produced by vascular casting, histopathology, and in vivo labeling demonstrate that bronchial arteries proliferate and perfuse the pulmonary parenchyma. Thus, the mechanisms of bronchial angiogenesis can be studied in an animal model that parallels the human condition of chronic pulmonary thromboembolism. Furthermore, this clinically relevant small animal model provides an opportunity to study the form and function of neovascularization where human experimentation is not tenable.

The surgical procedures listed provide sufficient detail such that an animal technician with surgical experience should be able to quickly master these techniques. Although our observations have been predominantly in Sprague Dawley male rats (75-100 g), other strains are equally appropriate for study. We have not systematically evaluated the age-dependence of the extent of bronchial angiogenesis. We have also provided details for the cannulation of the left carotid artery. We have used the measurement of fluorescent microspheres infused retrograde into the left carotid artery that mix in the aorta and subsequently lodge in the left lung as a marker for systemic perfusion of the ischemic lung and consequently, functional angiogenesis. We acknowledge that this measurement may be variable due to changes in cardiac output during the time of infusion. However, simultaneous measurement of systemic blood pressure continuously in rats before and during this measurement procedure indicated no changes in cardiovascular status. Furthermore, results presented in Figure 3 demonstrate a small acceptable range of variability within a group of rats. Interestingly, the naïve animals showed a minimally detectable level of fluorescence suggesting a very low bronchial perfusion in normal rats. Using microspheres of a smaller size may allow for detection of a different basal level of perfusion.

Our results show a well-developed vasculature by 28 days after LPAL. The methacrylate cast of the bronchial vessels associated with the left bronchus provides a remarkable view of the extensive and tortuous neovasculature that forms in response to pulmonary ischemia. Perhaps less dramatic but consistent with the vascular cast are the images obtained from histologic sections of the left lung 14 days after LPAL (Figure 2B). Rats were exsanguinated prior to tissue harvest for the section shown. However, the growth of the bronchial vessels is especially obvious when comparing the size of bronchial vessels to histological sections of left lung obtained 3 days after LPAL (Figure 2A). Bronchial endothelium shows clear signs of proliferation as assessed using PCNA staining. Thus the process of angiogenesis begins early after the onset pulmonary ischemia.

Our methods to determine the extent of the neovasculature have ranged from early histologic assessment of proliferating bronchial endothelium to microsphere measurement of fully functioning, perfusing bronchial vessels and vascular casting. Our intent is to provide a perspective of the process of bronchial angiogenesis over time. Proliferating vessel counting requires precision of the evaluator, adequate sample size, and an assumption that vessels associated with the airways are the primary locus of early angiogenesis. Assessment of microspheres lodging in the lung requires a fully developed angiogenic vasculature, consequently a late phenomenon. Additionally, the method assumes adequate mixing of spheres during infusion, no changes in cardiac output during the procedure, and that changes in the number of lodged spheres reflects changes in the number of perfusing vessels and not changes in vasoreactivity. We acknowledge the continued challenge to better define the process of systemic angiogenesis in an organ that normally has two distinct vascular beds and pulmonary networks appear to remain patent during ischemia. Endothelial labels in the rat have not demonstrated a unique angiogenic phenotype separating the two vasculatures histochemically. In vivo imaging is hampered by both ventilatory and cardiac motion. We continue to search for additional methods to quantify the extent of neovascularization with greater precision. The challenge remains to identify a small but growing systemic vascular bed among other non-perfusing pulmonary capillary networks.

The mechanisms responsible for ischemia-induced angiogenesis are not fully understood. Past work implicates the CXC-chemokines as playing a role at some stage in the overall process 13. Because the left lung in this model is ischemic but fully ventilated, hypoxia-inducible factors are unlikely to play a role in the systemic neovascularization that takes place. It should be emphasized that this situation is unlike other organs where ischemia is accompanied by tissue hypoxia. Thus the growth factors responsible for complete bronchial vessel growth within the lung need to be completely defined. Although the growth of new vessels appears to be essential for the preservation of ischemic tissue, angiogenic bronchial vessels have been shown to be dilated, pro-inflammatory, and hyperpermeable 15, 17. The chronic consequences of these abnormal vessels include persistent airway narrowing due to vasodilation and airway edema 18.

Additional questions related to this model pertain to the site of growth factor release and the responding vessels. Despite pulmonary ischemia, it is the systemic bronchial vessels that respond to the ischemic stimulus and not other pulmonary vessels within the lung. It is not clear how the ischemic stimulus is conveyed to upstream bronchial vessels. Despite a multitude of growth factors likely released by ischemic parenchymal tissue, how vessels originating from the aorta are induced to proliferate uniquely to the left lung is not clear. Future experimentation is required to address these questions.

We acknowledge the work of Dr. Adlah Sukkar, M.D. in assisting with casting of the lung. This work has been funded by NHLBI, HL088005. 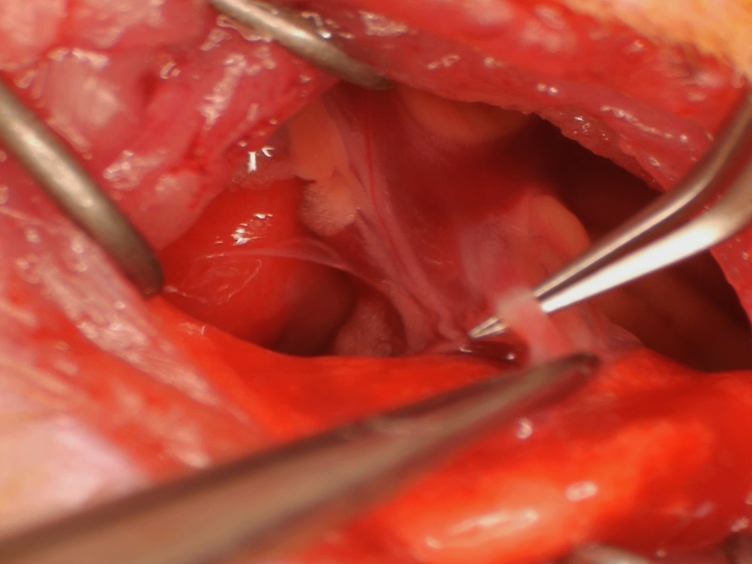