Small animal magnetic resonance imaging is an important tool to study cardiac function and changes in myocardial tissue. The high heart rates of small animals (200 to 600 beats/min) have previously limited the role of CMR imaging. Small animal Look-Locker inversion recovery (SALLI) is a T1 mapping sequence for small animals to overcome this problem 1. T1 maps provide quantitative information about tissue alterations and contrast agent kinetics. It is also possible to detect diffuse myocardial processes such as interstitial fibrosis or edema 1-6. Furthermore, from a single set of image data, it is possible to examine heart function and myocardial scarring by generating cine and inversion recovery-prepared late gadolinium enhancement-type MR images 1.

The presented video shows step-by-step the procedures to perform small animal CMR imaging. Here it is presented with a healthy Sprague-Dawley rat, however naturally it can be extended to different cardiac small animal models.

Myocarditis is a major cause of acute heart failure, sudden death, and chronic dilated cardiomyopathy 7. CMR has been established as the gold standard technique for measurement of function and for in vivo tissue analysis. Novel imaging techniques and improvements in imaging could not only improve the diagnosis of myocarditis, but also aid the study of the pathophysiology and speed identification of therapeutic targets 8-10. Small animal imaging is an important tool for the study of cardiovascular diseases. Techniques routinely used in clinical CMR, such as late gadolinium enhancement (LGE) cannot easily be transferred to small animal CMR due to the animals' high heart rates; but could already be shown 11. The small animal Look-Locker inversion recovery (SALLI) approach generates multi-modal image data sets allowing for the comprehensive assessment of both cardiac function and morphology (Figures 1 and 3). Here we show, in detail, the procedure and setup for small animal imaging with a typical SALLI protocol. In particular we show the reconstruction and analysis of the T1 imaging data sets.

1.1. Anesthesia of the rats

1.3. Positioning of the electrodes

2.1. Positioning of the animal and monitoring

Here we demonstrate the findings from a healthy Sprague Dawley Rat. With a well-prepared animal setup we described before, it is possible to get a stable ECG signal. Similar to human cardiac MRI protocols, we start with a survey to locate the heart. If the position of the rat in the coil is correct, we continue with a two-chamber view and a four-chamber view to detect the geometry for the SALLI stack.

The SALLI technique produces three types of images acquired at the same time. These are, firstly, cine images that can be used to study local and global LV function. LV parameters to be assessed with the help of a CMR software package include end systolic and end diastolic volumes, ejection fraction, and mass. The second type of image is multiple IR images with different nominal TI, from which the images with optimal nulling of normal myocardium can be selected. This ensures maximum enhancement of areas with focal myocardial fibrosis/ scar, as necessary for LGE imaging. Thirdly, T1 maps are generated. These should demonstrate homogenous relaxation times over healthy myocardium as shown in Figure 3 (representative T1 map). Before administration of gadopentetate dimeglumine, myocardium exhibits shorter T1 values than blood within the LV cavity. In the first minutes after administration of contrast agent, T1 of blood is shortened more than that of myocardium. While the presented data from a healthy animal shows homogenous T1 behavior across the entire myocardium, the presence of myocardial injury e.g. in models of myocardial infarction would demonstrate T1 shortening in the affected region. T1 maps can be reconstructed for any phase of the cardiac cycle (Figure 3c). 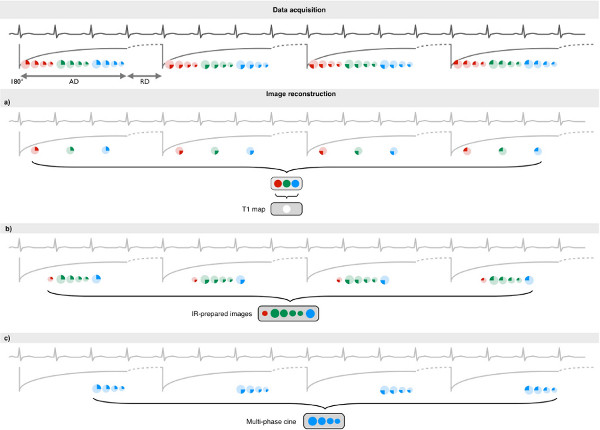 Figure 1. Pulse sequence scheme for fully sampled data sets and reconstruction schemes of multimodal images. Top: SALLI pulse sequence scheme. After an adiabatic inversion pulse (180°), image data for the first radial segment (segment = colored sectors of circles) are continuously sampled for consecutive cardiac phases (circles of different sizes) and heart cycles (different circle colors) during a predefined AD while magnetization recovers with a time constant T1* (solid line). Temporal resolution (eg, number of cardiac phases) is theoretically limited by minimum repetition time. After a predefined RD, during which magnetization recovers without any readout-induced perturbations with a time constant T1 (dashed line), the process is repeated for the next radial segment and so on. A. Reconstruction of T1 maps. In a first step, raw images for the number of cardiac cycles encompassed by AD are reconstructed from all available image data acquired during a predefined time window within the R-R interval (e.g. during systole). In a second step, pixel-wise nonlinear curve fitting is performed and resulting T1* values are corrected for readout-induced deviation of the magnetization recovery curve to generate T1 map from these raw images. B. Reconstruction of IR-prepared images. For a predefined interval after inversion (e.g. 100-300 msec), a set of IR-prepared images with predefined steps of inversion time (e.g. 25 msec) is reconstructed from all image data available within the interval. C. Reconstruction of cine images. Cine images for a predefined number of cardiac phases are reconstructed from all image data available beyond the time point at which all longitudinal magnetization within the field of view had recovered by at least 90%. (Messroghli et al., Small animal look locker inversion recovery (SALLI) for simultaneous generation of T1 maps and cine and reversion recovery-prepared images at high heart rates: initial experience, Radiology 2011. Reprinted with permission from RSNA). Click here to view larger figure. 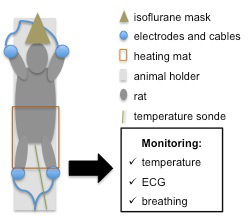 Here we present a method to generate multi-modality (cine MR, inversion-recovery and T1 maps) MR images in small animals. Small animal research plays an increasingly important role in cardiovascular disease research, and CMR is a powerful tool allowing us to study the function, structure and tissue composition of the myocardium. However, small animal CMR has a number of unique challenges owing to the high heart rates and small heart size. Improved methods of imaging, including more time efficient methods will play a further role in the development of this technique.

The initial set-up of the animal is a critical part of this protocol. It is important not only to allow for generation of optimal images, but also to allow for the animal to remain stable throughout the often prolonged examination (complete protocol including reconstruction takes about 2 hours). As the images are gated with the ECG, interference from poor lead contact, or from loops formed from the ECG cables, can lead to prolonged scan times or failure of the sequences. A poor ECG signal due to high heart rates or arrhythmia is one of the main challenges of the small animal CMR. In addition, temperature and anesthesia must be carefully controlled to obtain accurate, reproducible measurements and allow the animals undergo prolonged examination. In a similar manner to a standard human CMR examination, the heart is located, followed by two long-axis cine scans that then allow the short-axis SALLI images (T1 maps) to be performed. Depending on the given application, there are a number of variations regarding the SALLI images: 1) One single short-axis pre-contrast SALLI and multiple short-axis post-contrast SALLI (as presented here). This approach allows functional information, infarct size, and basic information on ECV to be obtained. 2) Multiple short-axis pre-contrast and multiple short-axis post-contrast SALLI. This protocol adds information on regional myocardial edema and distribution of ECV (e.g. in acute myocardial infarction) at the cost of prolonged scan time. 3) Single-slice pre- and post-contrast SALLI, multi-slice conventional cine. This quick approach yields functional information and global ECV, and might be sufficient in models of diffuse myocardial disease.

Existing CMR sequences can obtain excellent cine MR images in both humans and small animals. LGE imaging in small animals remains a challenge. Due to the high heart rates, acquisition time for an inversion recovery-prepared sequence is increased to 6-10 minutes per image 13, which causes serious problems with adjusting the inversion time to null signal from healthy myocardium.

T1 quantification provides information about tissue characteristics and gadolinium kinetics. Typical cardiac T1 methods require the acquisition of multiple images with different inversion times to allow for an accurate fitting of the underlying T1 curve 14. T1 mapping techniques for human applications typically acquire non-segmented raw images with durations of 150-200 msec each. This method is not suitable for small animals, where heart rates from 200-600 beats per minute are expected (i.e. cardiac cycles of 100 - 300 msec). SALLI solves this problem by using a segmented approach, thereby allowing myocardial T1 to be quantified in rats.

T1 mapping provides a quantitative approach to characterization of myocardium. It therefore allows diffuse processes to be studied. T1 values can be compared between individual studies and individual subjects, allowing the study of chronic changes in the myocardium. The ability to simultaneously assess function and myocardial properties will allow study of the chronologic formation of myocardial injury. In the future, multimodal imaging will allow the combination of functional information with qualitative and quantitative assessment of the myocardium to provide a more complete picture of cardiovascular disease.

All animal procedures were conducted in accordance with the Guidelines for the Care and Use of Laboratory Animals, and approved by the local animal care authorities. No conflicts of interest declared. 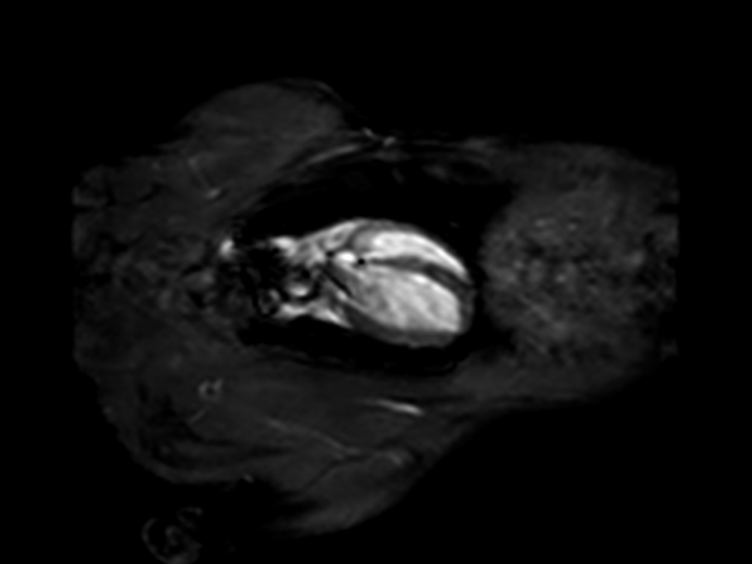