A standardized mouse model of subarachnoid hemorrhage by intraluminal Circle of Willis perforation is described. Vessel perforation and subarachnoid bleeding are monitored by intracranial pressure monitoring. In addition various vital parameters are recorded and controlled to maintain physiologic conditions.

In this video publication a standardized mouse model of subarachnoid hemorrhage (SAH) is presented. Bleeding is induced by endovascular Circle of Willis perforation (CWp) and proven by intracranial pressure (ICP) monitoring. Thereby a homogenous blood distribution in subarachnoid spaces surrounding the arterial circulation and cerebellar fissures is achieved. Animal physiology is maintained by intubation, mechanical ventilation, and continuous on-line monitoring of various physiological and cardiovascular parameters: body temperature, systemic blood pressure, heart rate, and hemoglobin saturation. Thereby the cerebral perfusion pressure can be tightly monitored resulting in a less variable volume of extravasated blood. This allows a better standardization of endovascular filament perforation in mice and makes the whole model highly reproducible. Thus it is readily available for pharmacological and pathophysiological studies in wild type and genetically altered mice.

SAH is the stroke subtype with the least beneficial outcome for patients: 40% of the patients die within a month after the bleeding1 and survivors rarely have a clinically favorable outcome.

The large majority of spontaneous SAHs (80%) are caused by rupture of intracranial aneurysms which are mostly located along the anterior and posterior communicating artery, the basilar artery, and middle cerebral artery (MCA)2.

Such aneurysms are difficult to model in animals and therefore animal models of SAH are either performed by injection of blood into the subarachnoid space/cerebral ventricles or by endovascular perforation of a subarachnoid vessel.

Autologous blood injection into the cisterna magna is easy to perform and reproducible as the blood volume can be directly controlled3. Unfortunately some aspects of the SAH pathophysiology, e.g. the vessel injury, cannot be modeled by this procedure. Another technical approach for induction of SAH is the opening of an intracisternal vein4.

However, the intraluminal CWp at the MCA branch appears to be the procedure that models the pathophysiology in humans most closely5. The method was developed and first described in rats by Bederson and colleagues and at the same time by Veelken and colleagues6,7. Later the intraluminal perforation model was adapted to mice8,9. A filament is inserted into the external carotid artery (ECA) and advanced to the skull base via the internal carotid artery (ICA). At the branching point of the MCA the filament perforates the vessel and induces a bleeding into the subarachnoid space at the skull base. The blood then distributes into the remaining subarachnoid space along fissures and blood vessels. Bleeding is stopped by clot formation at the site of perforation, but rebleedings, which are often detrimental in patients10, can occur. Accordingly, the endovascular filament model became a widely used SAH model during the past few years. The most frequently mentioned drawback of the filament perforation model is that bleeding volume cannot be directly controlled and may therefore be variable. This variability can significantly be reduced by tight control of animal physiology and post-hemorrhagic ICP.

Mice have the great advantage that a large number of genetically modified strains are available. However, due to their small size surgical procedures tend to be more complex than in larger species, e.g. rats or rabbits. Therefore the downscaling of techniques developed for rats to mice often does not lead to the desired results, e.g. as mice have a very limited body weight and blood volume noninvasive techniques for blood pressure and blood gas analysis as well as for hemoglobin saturation and heart rate monitoring have to be applied whenever possible. Accordingly, the aim of the current publication is to describe the filament perforation model for SAH in mice and to demonstrate how this model can be performed in a standardized and highly reproducible manner.

4. Considerations in Case of Survival Surgery (not shown in the video)

Once the surgery technique is mastered the procedure does not elicit any intraoperative mortality. Also bleeding can be achieved in virtually all animals. Postoperative mortality is 30-40% with most animals dying on day 1 after surgery (Figure 5).

The ICP before bleeding is around 4 mmHg. Bleeding results in a sharp increase of the ICP up to 120 mmHg. ICP values then stabilize within 5 min at approximately 30 mmHg (Figure 1). At 24 hr after bleeding the ICP is still slightly elevated to 10 mmHg5.

Blood pressure rises immediately after bleeding induction (Figure 2). This is due to the Cushing reflex, which is initiated by elevated ICP.

After bleeding induction a dramatic decrease of cerebral perfusion can be monitored. Reperfusion to an individually different level occurs within 5 min after the insult (Figure 3).

We perfused animals 3 hr after SAH transcardially with 20 ml of saline followed by 20 ml of chilled 4% PFA. The brain was carefully removed and blood distribution in the subarachnoid space was observed. Blood distributes along the perivascular space of brain supplying arteries towards the dorsal cortex. In all cases the extravasated blood covered the MCA up to the second branching. The side ipsilateral to the hemorrhage was covered with more blood than the contralateral hemisphere (Figure 4).

Blood distribution does not correlate with ICP rise

In 5 animals we investigated whether the rise of the ICP during SAH has an impact on blood distribution in the subarachnoid space. One hypothesis was that animals that show only a moderate ICP rise during SAH might exhibit less extravasated blood, which then does not distribute to the dorsal parts of the cortex. We found that only the size of the hematoma at the skull base seems to correlate with the ICP rise. Blood distribution along the brain supplying arteries did not differ between animals with different ICP peak values. 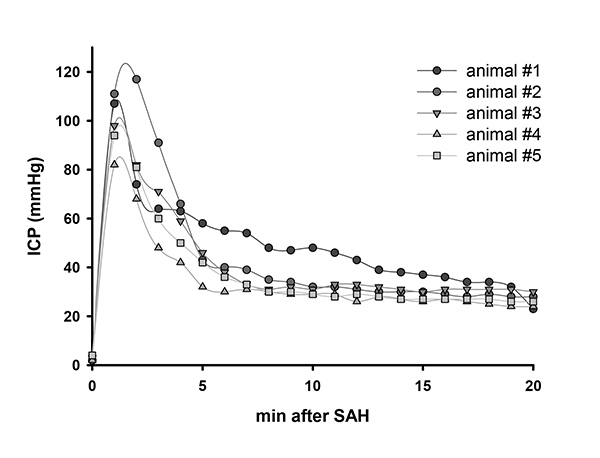 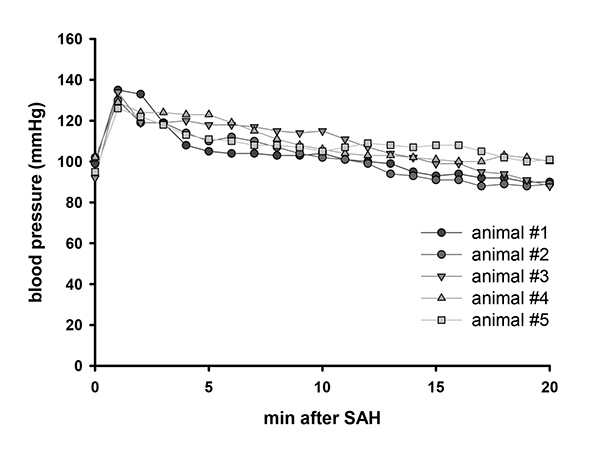 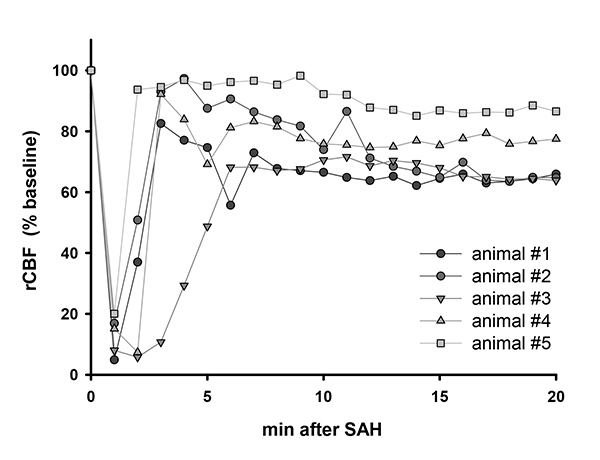 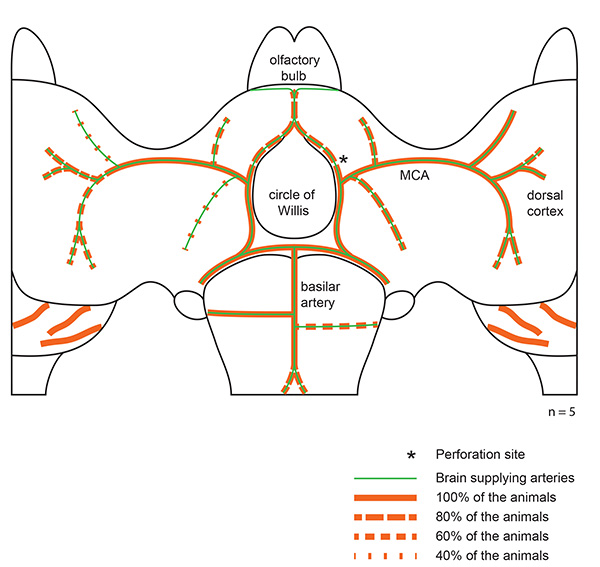 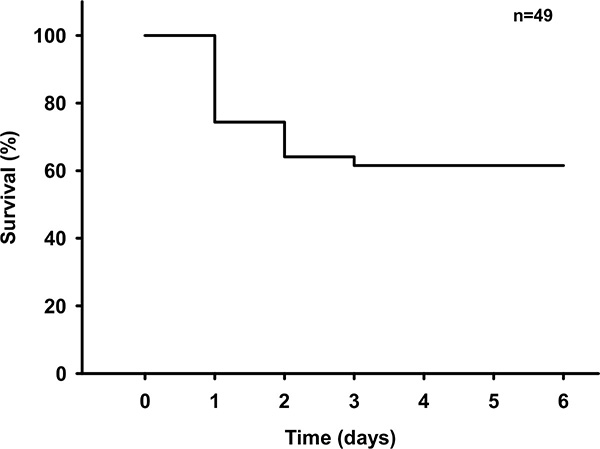 Treatment options after SAH are scarce and mostly inefficacious. Therefore the pathophysiology of post-hemorrhagic brain damage needs to be further understood in order to identify new therapeutic targets and develop novel therapeutic approaches. Standardized and well reproducible animal models in genetically modified animals, i.e. mice, are crucial for such investigations. The CWp model has become a widely used model for SAH as it resembles the pathophysiology in humans closely; however, its use in mice is hampered by low reproducibility and a high interpersonal variability. Variations of the model are caused by different anesthetic protocols, which alter physiologic conditions. The amount of bleeding varies between animals due to vessel reactivity, blood pressure and coagulation differences12. Thus it is important to monitor physiologic conditions throughout the procedure and to establish surgical and monitoring protocols which reduce the variability of this model.

Blood distribution after SAH may be different between species. In the rat model blood seems to be equally distributed across both cerebral hemispheres6. As human brains show a gyrencephalic architecture the blood is likely to distribute mainly along brain sulci and not primarily along vessels. On the other hand, brain supplying arteries run in those sulci e.g. the MCA in the lateral sulcus. Thus vessel pathologies might be similar in rodent animal models and the human brain.

In our laboratory we use a combination of fentanyl, medetomidine and midazolam as described above for surgical anesthesia. This combination has a relatively small effect on blood pressure and vessel reactivity11. In contrast, isoflurane, a widely used anesthetic in SAH research, leads to peripheral vasodilation, severely impaired cerebral autoregulation13, and low blood pressure immediately after SAH12, findings which are not regularly associated with the early pathophysiology of SAH in humans. Hence, the use of an anesthetic protocol that does not disturb post-hemorrhagic pathophysiology is an important prerequisite for a valid experimental SAH model.

The current research is funded by the Solorz-Zak Research Foundation. 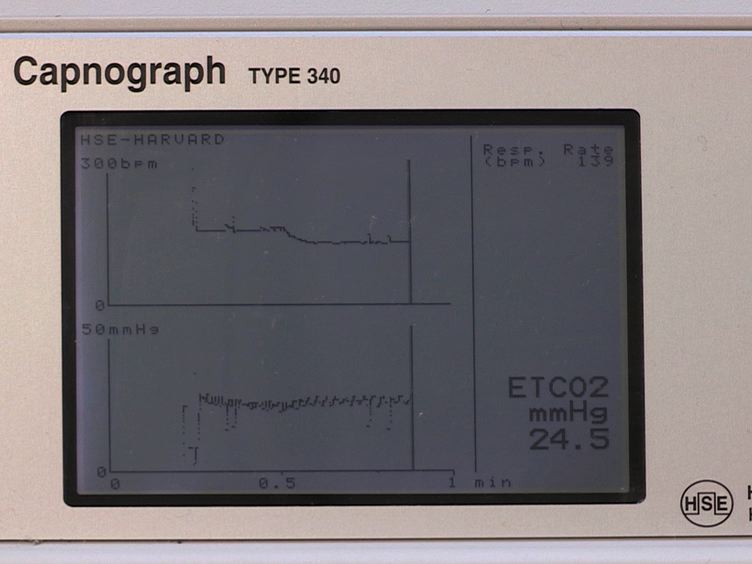