Research performed in the yeast Saccharomyces cerevisiae has significantly improved our understanding of important cellular phenomona such as regulation of the cell cycle, aging, and cell death. The many benefits of working with S. cerevisiae include the facts that they are inexpensive to grow in the lab and that many ready-to-use strains are now commercially available. Nevertheless, proper maintenance of this organism is critical for successful experiments.

This video will provide an overview of how to grow and maintain S. cerevisiae in the lab. Basic concepts required for monitoring the proliferation of a yeast population, such as how to generate a growth curve using a spectrophotometer, are explained. This video also demonstrates the hands-on techniques required to maintain S. cerevisiae in the lab, including preparation of media, how to start a new culture of yeast cells, and how to store those cultures. Finally, the video shows off some of the ways these handling and maintenance techniques are applied in scientific research.

The important discoveries of cell cycle regulation, telomerase activity, and autophagy in Saccharomyces cerevisiae, have proven that this yeast species a valuable model organism for research. Yeast are easy to grow and yeast plasmids and strains are commercially available. Despite the relatively inexpensive requirements for culturing yeast, maintenance of this organism is critical for successful experiments. This video will give you an inside look in how to grow yeast cell cultures and maintain S. cerevisiae strains in laboratories.

In biology, growth curves represent the change in cell population over a period of time. In yeast, the growth curve is generated by plotting the optical density, or "OD", of cell culture at 600 nm in the y axis and time on the x axis. Optical density or "absorbance" is the logarithmic ratio of the intensity of light entering the yeast cell suspension to the intensity passing through it. The OD at a specific wavelength of light is measured using a spectrophotometer.

When working with yeast, the growth curve of the yeast strain has to be generated by taking OD measurements at different time intervals. The yeast growth curve is divided into three major phases: lag, logarithmic, and stationary phase. During lag phase, cells are acclimating to the environment and are growing in size but are not dividing. In log phase, cells are actively dividing thus leading to cell doubling. Once available nutrients are depleted, yeast cells enter stationary phase, where cell division slows down and the cell population remains constant.

Using the growth curve, the doubling time of the strain can be calculated with the following equation: OD1 and OD2 represent optical density measurements, and T1 and T2 are the time between measurements. The doubling time is defined as the time required for a cell population to double in cell number. Calculate between two log phase OD values, for example, between values 0.2 and 0.5 as shown here. Wild type yeast should give a doubling time value of approximately 90 minutes.

Knowing the doubling time is beneficial since it will allow you to plan your experiments accordingly throughout the day.

Now that we have covered the nuts and bolts of the yeast growth curve, let’s progress onto the laboratory and do some hands on preparation to grow yeast cells. The major components of rich growth media — AKA Yeast food - are: yeast extract, peptone, and a sugar source. Yeast extract contains yeast cell contents, excluding the cell wall, and provides amino acids, vitamins, carbohydrates, and other nutrients required for growth. Peptone is derived from animal meat or milk and is the main source of amino acids in yeast media. A sugar source, typically glucose, is added as it provides energy to the growing cells.

After dissolving yeast extract and peptone in water, sterilize the mixture using an autoclave. To make yeast media plates, add agar to the liquid media, and pour the mixture into plates, allowing it to solidify at room temperature. These plates can be used when streaking strains to grow yeast colonies.

Now that we have all our media prepared, how do we grow cultures of these critters from scratch? First and foremost, make sure all instrument, solutions, and media are sterile.

Next, obtain a plate to streak out yeast cells. No not that kind of streaking! Streaking is the process of spreading liquid yeast cultures onto agar plate using a sterile instrument, like you see here. Around the "streaks" individual colonies will form, which are derived from a single yeast cell, that can be picked, in order to obtain a pure genetic population of yeast cells. Once plates are streaked, invert the plate and place it in a 30 °C incubator for 2 to 3 days. This is the optimal temperature for yeast growth.

Once colonies have formed, inoculate the yeast cells in a small volume of growth media. Inoculate here means picking a single colony and introducing it to the media by mixing it briefly. Incubate the culture in a 30 °C shaker or rotator for 48 hours.

To grow larger cultures of cells, first check the OD600 of the 2 day-old yeast culture using a spectrophotometer. Make the appropriate dilutions so that the starting OD is approximately 0.1-0.2. After diluting the cells, place the flask in a 30 °C shaker and grow the cells up to the desired OD.

The next important lesson after learning how to grow S. cerevisiae is how to store them for future use. Yeast grown on plates can be stored at 4 °C up to 3 months. However, if you want to grow a fresh culture, make sure you re-streak the cells on a fresh plate first before inoculating.

To store stocks of yeast strains for long periods, aliquot the cells in cryovials containing glycerol. Cells can then be stored at -80 °C, where they can remain up to several years.

Now that you’re a pro when it comes to growing yeast cells, let’s take a look at how we can apply these essential techniques in scientific research. Cells in the stationary phase can be used to study genes that regulate genome DNA instability during aging. This video clip shows the collection of cells from a three-day-old culture. They are plated on selective media that prevents normal yeast cells from growing. Only cells that have acquired a mutation can form colonies on these plates. The number of colonies on the plates is proportional to the level of genomic instability in the culture.

Another example of studying aging is by analyzing the chronological life span of yeast cells. Chronological aging denotes loss of cell viability over a period of time and can be studied by growing liquid cultures as shown here. In this video, the scientist is loading various cultures onto the spec in order to generate growth curves, which will help to determine cell viability.

Wild type yeast cells in log phase represent healthy, normal cells and can be used to study eukaryotic organelles, such as the ribosome. In this video, you can see the loading of the cell lysate from cells collected in log phase to a sucrose gradient. Next, cells are spun to sediment ribosomes and an absorbance monitor is used to generate the ribosome profile.

You’ve just watched JoVE’s introduction to husbandry and maintenance of Saccharomyces cerevisiae. In this video we reviewed the yeast growth curve, demonstrated how to grow cell cultures, and showed you how to maintain yeast strains. Thanks for watching, and don’t forget to recommend this video to a bud. 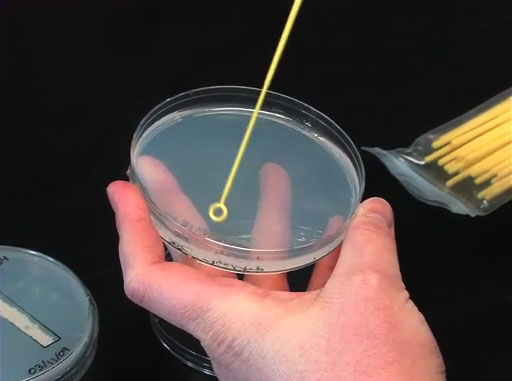