This protocol illustrates essential modifications of polyribosome fractionation in order to study the translatome of in vivo CNS samples. It allows global assessment of translation and transcription regulation through the isolation and comparison of total RNA to ribosome bound RNA fractions.

Multiple processes are involved in gene expression including transcription, translation and stability of mRNAs and proteins. Each of these steps are tightly regulated, affecting the final dynamics of protein abundance. Various regulatory mechanisms exist at the translation step, rendering mRNA levels alone an unreliable indicator of gene expression. In addition, local regulation of mRNA translation has been particularly implicated in neuronal functions, shifting 'translatomics' to the focus of attention in neurobiology. The presented method can be used to bridge transcriptomics and proteomics.

Here we describe essential modifications to the technique of polyribosome fractionation, which interrogates the translatome based on the association of actively translated mRNAs to multiple ribosomes and their differential sedimentation in sucrose gradients. Traditionally, working with in vivo samples, particularly of the central nervous system (CNS), has proven challenging due to the restricted amounts of material and the presence of fatty tissue components. In order to address this, the described protocol is specifically optimized for use with minimal amount of CNS material, as demonstrated by the use of single mouse spinal cord and brain. Briefly, CNS tissues are extracted and translating ribosomes are immobilized on mRNAs with cycloheximide. Myelin flotation is then performed to remove lipid rich components. Fractionation is performed on a sucrose gradient where mRNAs are separated according to their ribosomal loading. Isolated fractions are suitable for a range of downstream assays, including new genome wide assay technologies.

Gene expression is determined by the combined action of transcription, translation and stability of mRNA and proteins, with translation bearing the most predominant effect1. It is now evident that each of these steps is highly regulated. Micro-RNAs, formation of RNA granules, alternative and cytoplasmic polyadenylation are some examples of post-transcriptional regulation of gene expression2,3. Each of these mechanisms uncouples transcription from translation and influences the proteome in the biological system of interest. Thus, unsurprisingly, mRNA levels alone are an imperfect readout of protein levels4. Quantitative proteomics provides the most direct assessment of gene expression, however despite recent advances, there are still considerable limitations on sensitivity and protein sequence resolution. Therefore addressing the translatome, the repertoire of translating mRNAs, offers an excellent compromise between studying the transcriptome and proteome. It is more accurate than transcriptomics in assessing final gene expression, and provides both higher coverage and sequence resolution than proteomics.

In mammalian systems, the majority of translation events begin via cap-dependent initiation. A group of eukaryotic initiation factors together with the 40S small ribosomal subunit assemble at the 5' cap of an mRNA. The complex then scans the mRNA and upon reaching the start codon AUG, recruits the 60S large ribosomal subunit to form a complete 80S ribosome. The elongation stage proceeds with the ribosome moving along the mRNA, with elongation factors assisting the incorporation of amino acids from loaded tRNAs to the nascent peptide chain. Multiple ribosomes can proceed along a single mRNA simultaneously and the number of associated ribosomes has been shown to correlate with the rate of protein synthesis5,6. This makes ribosomal loading a reliable indication for translation and allows separation of actively translating mRNAs based on sedimentation rate. In addition to quantification of translating mRNAs, sequence information can be obtained to identify motifs involved in translation regulation. Also RNA binding proteins and other translation factors can be isolated from different fractions, facilitating the study and discovery of related regulatory proteins.

In the nervous system, translational control has been linked to processes such as mRNA storage, transport and local protein synthesis. Growth cones have been shown to harbor a specific localized pool of mRNAs distinct from the rest of the axon7. In addition, axons possess the ability to locally synthesize proteins8,9. As a result, local control of translation has become a crucial topic of study in neurobiology. The potential of polyribosome fractionation to address this has been illustrated in several studies, in which the technique was used to investigate axon guidance in spinal cord development, and demonstrated the activity-dependent translation of BDNF in the brain10,11.

All animal experiments were performed in accordance with the institutional guidelines of the DKFZ.
Caution: In order to prevent RNAse contamination of samples, take basic precautions for avoiding RNAse contamination and prepare all buffers with DEPC-treated water.

Figure 2 shows representative polyribosome profiles after fractionation. The profiles of brain and spinal cord show characteristic absorption curves as described before for cell lines. mRNAs bound to small ribosomal subunits (40S) sediment at lighter fractions and appear first as a peak on the profile, followed by the large ribosomal subunit (60S) and monosome (80S) bound mRNAs. mRNAs bound to multiple ribosomes sediment at heavier fractions, with the later peaks indicating increasing number of bound ribosomes. Global translation can be assessed from the profile. As an example, brain tissue has a higher polyribosome to monosome ratio than spinal cord tissue, indicating more active translation.

RNA extracted from individual fractions were assessed by Bioanalyzer, showing distribution of 18S and 28S rRNA. 18S rRNA appears earlier in the profile, in accordance with the small ribosomal subunits sedimenting in lighter sucrose fractions. Typical yields of total RNA are 10-20 µg for brain and 2-4 µg for spinal cord. RNA yields from individual fractions are up to 4 µg and 0.8 µg for brain and spinal cord respectively, depending on the fraction. A blank sucrose gradient already shows some background absorption at 260 nm, due to the presence of DTT. This background can be subtracted during data analysis in order to normalize sample values. EDTA treatment collapsed the polyribosome peaks, demonstrating the sedimentation profile is due to translation. 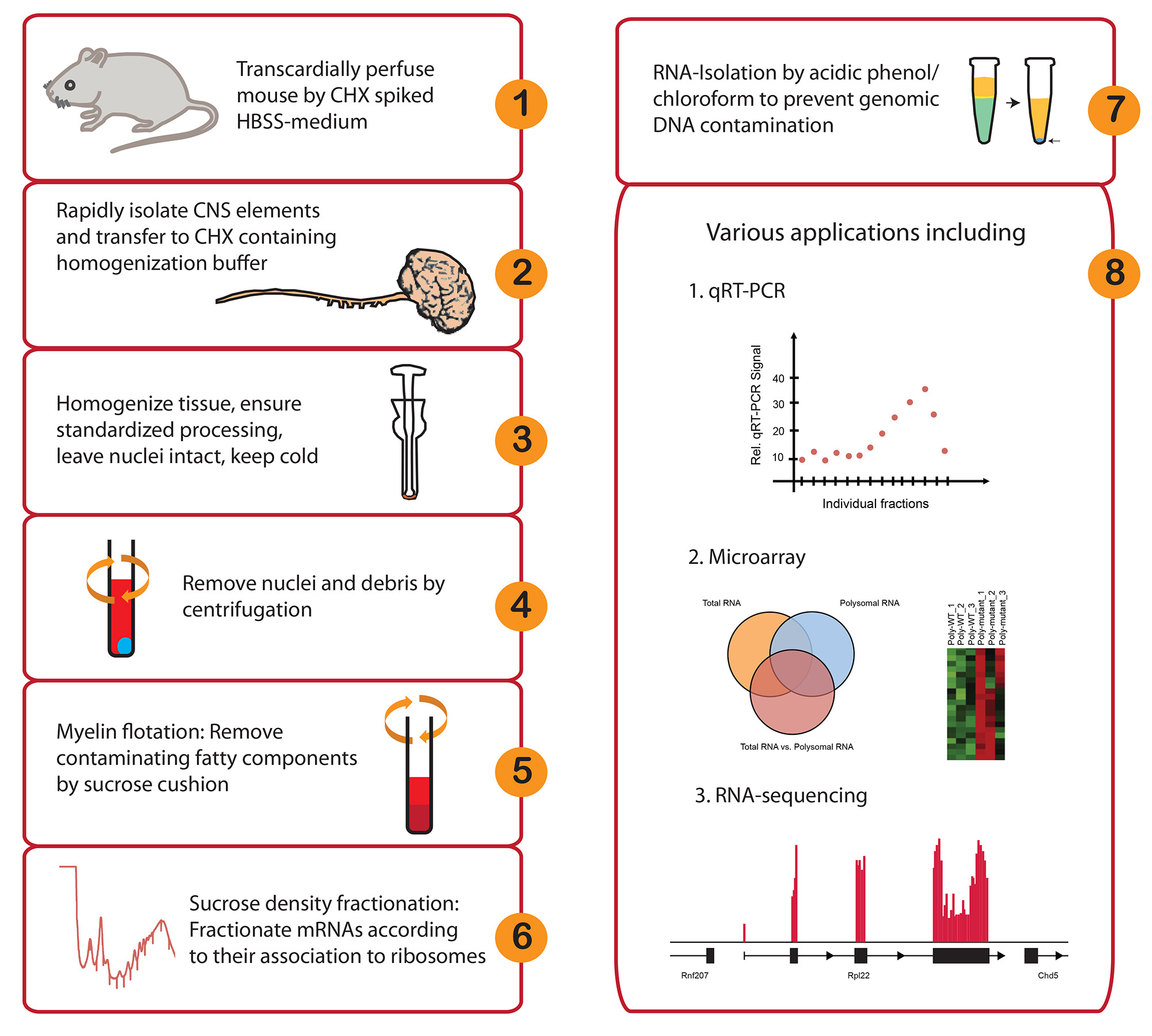 Figure 1. Workflow and potential applications of in vivo polyribosome fractionation. Please click here to view a larger version of this figure. 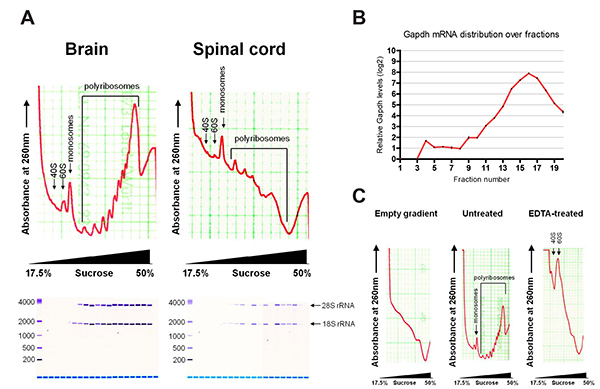 Figure 2. (A) Typical polyribosome profiles of brain and spinal cord, with assessment of extracted RNA by Bioanalyzer. (B) Distribution of Gapdh mRNA over fractions by qRT-PCR. (C) Polyribosome profiles of empty gradient and brain with and without EDTA treatment. Please click here to view a larger version of this figure.

Although polyribosome fractionation is not a novel technique, it remains a particularly challenging one. Based on the input material, substantial optimization can be necessary. This is especially the case for in vivo CNS samples, where the amount of material is often a limitation and fatty tissue components hinder isolation of translating mRNAs. Most published fractionation protocols deal with yeast or mammalian cell lines, and there are established protocols for the brain12,13,14. In contrast, there are barely any publications describing fractionation of the spinal cords, and previous protocols require spinal cord from a large number of animals to be pooled15. For these reasons, several essential modifications were made to adapt the fractionation protocol for CNS tissues, including single mouse spinal cord. Ribosome immobilization with cycloheximide is performed during animal perfusion to avoid dissociation of ribosomes during the long process of tissue extraction. Subsequently, polysomal RNAs are extracted in a specific manner to maximize polyribosome yield. First, controlled homogenization of the tissue by douncing, keeps the nucleus intact and prevents DNA contamination. The nucleus is then removed reliably by centrifugation. The combination of the detergents NP-40 and sodium deoxycholate ensures lysis of the endoplasmic reticulum and release of its membrane associated ribosomes. In addition, UV-absorbing components within the lipid rich myelin obscure the polyribosome profiles. Myelin flotation is therefore necessary, where dense compounds such as polyribosomes are pelleted and lighter compounds such as myelin float and are removed16. Polyribosomes are then sedimented over a 17.5% to 50% sucrose gradient. Instead of manually layering and freezing each sucrose layer, gradients can also be prepared using a gradient mixer. Extraction of RNA from fractions using acidic phenol/chloroform allows DNA to be removed with minimal RNA loss. However, phase inversion may occur at dense sucrose fractions (above fraction 16).

This protocol provides advantages over other conventional methods that address the level of translation. For example, both the measurement of phosphorylated S6 (a prominent translation marker) as well as labeling of nascent chains with radioisotopes give information on global translation levels but reveal little on what specifically is being translated. Polyribosome fractionation, on the other hand, allows not only assessment of global translation, but also of the identity of translating mRNAs and the related regulatory proteins. Quantitative real time PCR can be performed on isolated RNAs for a quick read out of selected mRNAs, and microarrays and next generation RNA sequencing can be performed for genome wide studies. The optimizations presented here allow the technique to be used with minimal amounts of CNS tissues, therefore diminishing the number of animals needed and improving overall experimental quality by reducing tissue processing time. On the other hand, this technique cannot distinguish stalled ribosomes from translating ones. Transcripts carrying stalled ribosomes will sediment in the heavy fractions, and this should be kept in mind when interpreting the data.

There are recent reported techniques, namely RiboTaq and TRAP, in which ribosomes are labeled with epitope tags or reporters respectively in a cell type specific manner and associated mRNAs isolated by immunoprecipitation17,18. This technique can be coupled to polyribosome fractionation to offer high resolution read out for specific cell populations. Ribosome foot-printing is another novel technique that involves nuclease digestion to generate small fragments, or “footprints”, of mRNAs that are protected by ribosomes. Libraries are then generated from these footprints and sequenced. This method provides a codon-specific whole genome analysis on translation and is able to identify stalled ribosomes, non-AUG start codons and small upstream open reading frames, which cannot be achieved by polyribosome fractionation19. However, polyribosome fractionation can be coupled to ribosome profiling for isolation of digested fragments containing single ribosomes, thus enriching for the molecular species needed for library preparation in which high sample purity is often required. Taken together, polyribosome fractionation is a flexible method with lasting significance and can be coupled to various downstream applications including genome wide assays like next-generation sequencing. 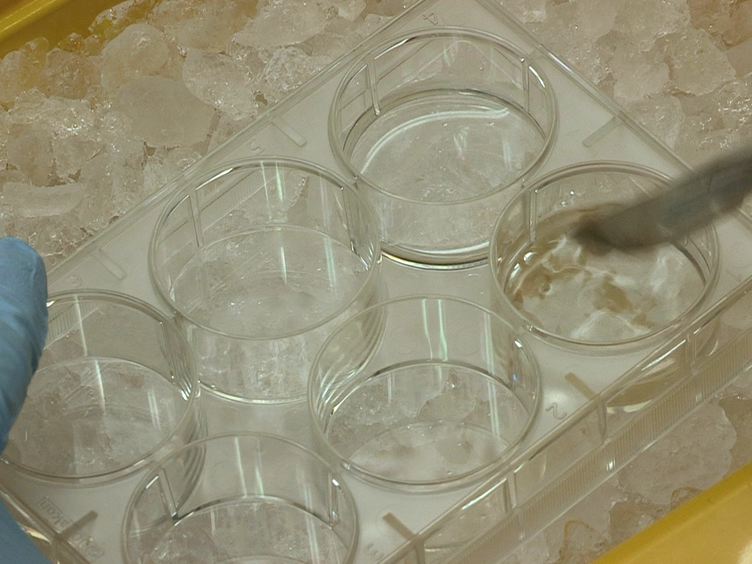