A technique is demonstrated for the microsurgical procedure for heterotopic transplantation of hearts in mice, including simplified methods for donor harvesting and recipient vessel anastomosis.

Mice are often used as heart transplant donors and recipients in studies of transplant immunology due to the wide range of transgenic mice and reagents available. A difficulty is presented due to the small size of the animal and the considerable technical challenges of the microsurgery involved in heart transplantation. In particular, a high rate of technical failure early after transplantation may result from recipient death and post-operative complications such as hind limb paralysis or a non-beating heart. Here, the complete technique for heterotopic mouse heart transplantation is demonstrated, involving harvesting the donor heart and its subsequent implantation into a recipient mouse. The donor heart is harvested immediately following in situ perfusion with cold heparinized saline and transection of the ascending aorta and pulmonary artery. The recipient operation involves preparation of the abdominal aorta and inferior vena cava (IVC), followed by end-to-side anastomosis of the donor aorta with the recipient aorta using a single running 10-0 microsuture and a similar anastomosis of the donor pulmonary artery with the recipient IVC. Following the operation the animal is injected with 0.6 ml normal saline subcutaneously and allowed to recover on a 37 °C heating pad. The results from 227 mouse heart transplants are summarized with a success rate at 48 hr of 86.8%. Of the 13.2% failures within 48 hr, 5 (2.2%) experienced hind limb paralysis, 10 (4.4%) had a non-beating heart due to graft ischemic injury and/or thrombosis, while 15 (6.6%) died within 48 hr.

Animal models of organ transplantation can provide valuable information for improving treatment of clinical transplant patients. Mouse models are particularly useful for studying the immune mechanism of organ transplant rejection or acceptance due to the wide range of genetically modified mice and reagents specific for mice that are not available for other animal models1-3. A challenge with mouse models of transplantation is the small size of the donors and recipients which requires considerable technical skill to achieve satisfactory outcomes.

A technique was first described for heterotopic transplantation of hearts in rats4 which was subsequently adapted for mouse heart transplantation by Corry et al5. This technique involved preparing the recipient prior to the donor operation and no perfusion of the donor heart, both of which are likely to compromise survival of the transplanted heart or the recipient. The procedure has been widely used as originally described to examine the mechanisms of transplant rejection and tolerance6-8. Others have adapted the original rat heart transplant procedure of Ono and Lindsey for heart transplants in mice9,10. More recently, a technique was published for mouse heart transplantation that overcame some of the problems associated with the method of Corry et al11. The protocol described here incorporates our modifications, based on the method of Mottram et al12, which include: in situ perfusion with cold heparinized saline immediately after thoracotomy and performing the donor operation prior to the recipient operation to minimize recipient operation time. In addition, we use small atraumatic vessel clamps instead of 6-0 silk ties. Although vessel clamps have the disadvantage of taking more space they are easier to control than ties, which should not be too tight or loose and are less straightforward to remove than clamps. Our method uses a single running suture for vessel anastomosis, although in the initial learning stages an alternative is to use stay sutures at the proximal and distal corners to ensure evenness of sutures and thus patency of the anastomosis.

Prior to commencement of experiments, obtain approval from the relevant institution’s Animal Care Ethics Committee for the planned experiments. Maintain mice in the accordance with the requirements of your institution. The following protocol has been approved by Sydney University and Royal Prince Alfred Hospital committees.

Prior to commencing surgery, all instruments should be cleaned thoroughly and sterilized by soaking in 80% ethanol. Some institutions stipulate autoclaving however this can damage fine microsurgical instruments over the long term.  Where possible use sterile disposable equipment.

After an initial training period, 227 cases of mouse heterotopic heart transplantation in our group were analyzed. The success rate within the first 24 hr was 90.3% and at 48 hr it was 86.8%. Of the 30 (13.2%) failures within 48 hr, 5 (2.2%) experienced hind limb paralysis and had to be euthanized, 10 (4.4%) had a non-beating heart due to graft ischemia injury and/or thrombosis, while 15 (6.6%) died within 48 hr. Some experimental graft survivals are shown in Table 1 with a variety of strain combinations. Heart transplants between the same donor and recipient strain were accepted long-term while transplants between non-identical strains were rejected.

The appearance of transplanted hearts is shown in Figure 1. The cause of heart transplant failure is generally determined by the time after transplant when the heart stopped beating in combination with the appearance of the heart. If necessary, the cause of cessation of beat should be confirmed by histological analysis of the heart. For example, in a C57BL/6 strain recipient of a DBA/2 donor heart transplant, the heart ceased beating on day 2, which is most unusual as rejection in unsensitized recipients usually takes at least a week. Figure 1A shows the heart from this recipient with evidence of thrombosis and infarction of the heart tissue. In the strain combination of C57BL/6 donor to C57BL/6 recipient, the heart was not rejected and survived for >100 days (Figure 1B). In this case the heart had reduced slightly in size due to muscle atrophy secondary to its non life sustaining status. In contrast, in the rejecting strain combination of DBA/2 donor to C57BL/6 recipient, the transplanted heart had ceased to beat by day 7 and showed evidence of rejection (Figure 1C). It was completely fibrotic and shrunken by day 100 (Figure 1D). 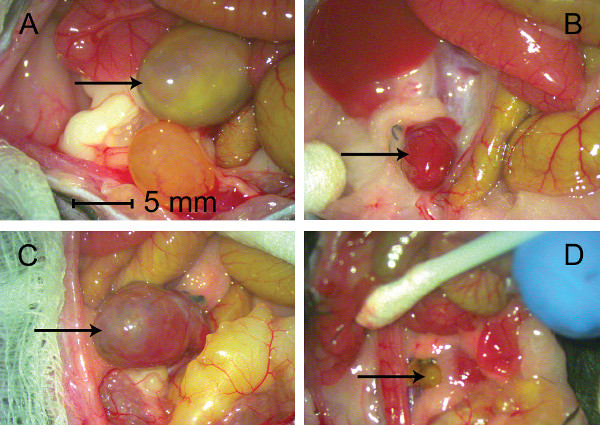 Mouse heart transplantation is a challenging microsurgical method that requires considerable surgical skill to master. The most challenging aspect is the small diameter of the vessels. In addition, it is necessary to limit the recipient operation time and bleeding. The technique for mouse heart transplantation was first described by Corry et al. in 1973 and subsequently by Mottram et al12. Our modifications include the following points. Firstly, immediate perfusion of the donor heart with cold heparinized saline following thoracotomy and transection of aorta and pulmonary artery bundle soon after perfusion prevents warm ischemia during harvesting. Secondly, starting the recipient preparation soon after completion of donor harvesting, instead of preparing the recipient before the donor, reduces the abdominal exposure time in the recipient with consequent improvement in survival. Finally, use of small atraumatic vessel clamps to block blood flow, instead of ties for the recipient aorta/IVC bundle, usually results in less damage to the vessels and can reduce the incidence of hind limb paralysis.

In addition, the following points are important for success. The optimal size of donors and recipients is around 23 to 26 g and optimum age is 10 to 12 weeks. Older animals do not have larger vessels and their increased fat makes exposure of the aorta and IVC more difficult. Dehydration and hypothermia of the recipient during surgery must be avoided. Recipient bowel needs to be well protected from dehydration using warm saline soaked gauze and the recipient can be maintained on a heating mat at 37 °C. The gauze needs to be kept moist by regular application of fresh, warm saline during the operation. To minimize blood clots and air emboli that can lead to hind limb paralysis, the vessel anastomosis sites need to be well flushed before closing. Bowel should be carefully replaced at completion of transplantation to prevent any twisting of the mesentery. Subcutaneous injection of 0.6 ml warm saline assists animal recovery whereas a larger volume of intravenous fluid soon after surgery may cause hypertension and bleeding of anastomoses. Limiting the time that the recipient aorta and IVC are cross clamped to less than 30 min will improve the success rate. 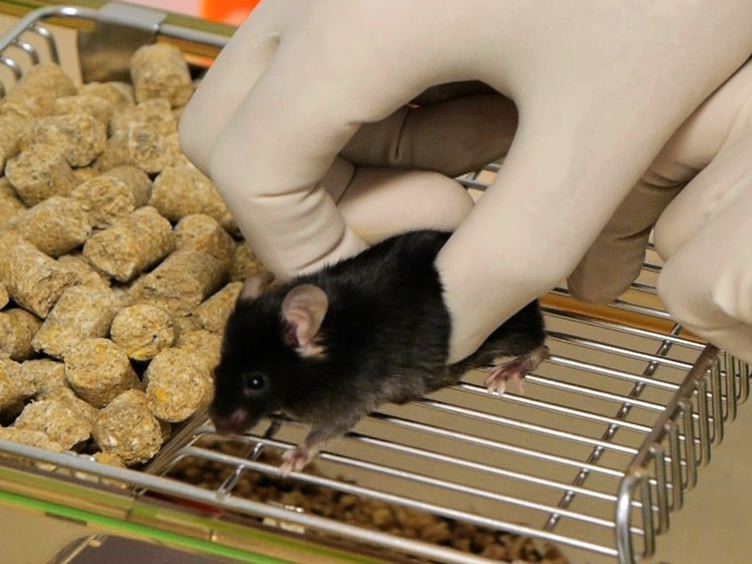