Methods for biopsy of Vastus lateralis, preparation of purified mitochondria, and respirometric profiling are described. The use of small muscle volume makes this technique suitable for clinical research applications.

Mitochondria are the primary energy production sites in the cell and have important roles in aging as well as various age related disorders such as cardiovascular disease, Alzheimer’s disease, diabetes, cancer, and obesity. Respirometric profiling of isolated mitochondria provides direct analysis of electron transport chain (ETC) function and has contributed significantly to our understanding of mitochondrial biology and its role in health and disease. Isolated mitochondria are used to study various aspects of bioenergetics like, substrate transport, ATP synthase activity, proton leak, etc. The methodology described in this manuscript has been optimized to permit respirometric analysis of mitochondria isolated from skeletal muscle tissue biopsies obtained from human subjects. The biopsy protocol described in this manuscript has been utilized by our staff for the past 12 years. Our group has performed over 700 procedures on adults of various ages, up to 90 years old, and with various chronic disease conditions without any adverse safety issues. A key aspect of this protocol is that it is specifically designed to utilize minimal amounts of tissue, thereby facilitating its use in clinical research studies.

While these protocols yield excellent results, tissue size requirements are high compared to the method described in this manuscript. For example, Gross et al.5 used 1.5-1.8 g of the gastrocnemius muscle, and about 2 g of the kidney tissue. Similarly, Franco et al.6 used 500 mg mouse liver tissue. From our experience, typical yields to be expected from percutaneous needle biopsy of skeletal muscle (Vastus lateralis) range from 100-200 mg. The ability to assess mitochondrial function in 20-50 mg of muscle tissue using the protocol described here permits users to perform multiple assessments per biopsy and to store samples for future use in other molecular biology experiments. This is a critical feature in clinical research and other studies that require diligent use of samples. It should be noted that previously frozen mitochondria are not good for studying coupled respiration due to outer mitochondrial membrane damage and loss of Cytochrome C activity. Our method has been adapted and modified from the method published by Chappell and Perry7.

Using the methods described in this manuscript, we have recently reported that the respirometric profile of mitochondria isolated from human Vastus lateralis is directly correlated with physical ability, measured as gait speed8.

NOTE: The protocol described was approved by the Institutional Review Board of Wake Forest School of Medicine. Informed consent was obtained in writing. All participants were healthy older adults (65-79 years) of both genders, with BMIs ranging from 23-35.

NOTE: Use this concentration to calculate the quantity of mitochondria used for loading onto a 24-well microplate for respirometric measurements, or for Western blot experiments. Take into account the dilution factor (10) for calculation of the protein concentration.

NOTE: Visualize the O2 consumption rate (OCR) in pMoles O2/min, or absolute levels of O2 and pH in the data output.

NOTE: Determine the mitochondrial marker COX IV and whole tissue GAPDH by Western blotting to assure enrichment of mitochondria in the final sample

Figure 1 depicts a detailed flowchart of the entire protocol.

Figure 3 shows typical respirometric profiles driven by complex II (succinate and rotenone) using 1.0 μg, 2.5 μg, and 5.0 μg of mitochondria. As expected, overall OCR is increased with higher amounts of mitochondria. The calculated respiratory control ratio (RCR) for this assay is 7.95, indicating that the mitochondrial preparation is of high quality. Furthermore, state 3u OCR is slightly higher than that of state 3, confirming mitochondrial quality.

In order to compare consistency of results when profiling different amounts of mitochondria, we performed ANOVA (analysis of variance) and calculated the sum of squares (SS) as actual values of variance using 1.0 µg, 2.5 µg, and 5.0 µg of mitochondria loaded per well (Figure 4). SS is presented for state 2, state 3, state 3u, antimycin A, and RCR. For state 2 and state 3 measurements, one way ANOVA was statistically significant (p<0.01 and p<0.05, respectively). Similarly, the one way ANOVA was statistically significant for antimycin and RCR (p<0.01 and p<0.0001, respectively. No significant difference was seen for state 3u between groups. These results indicate that 5.0 μg of mitochondria per well gave the lowest SS compared to other concentrations and is the optimal amount to use in the XF 24 system with our population of participants.

Table 2. Mix, measure, and mix cycle setting for the respirometer. 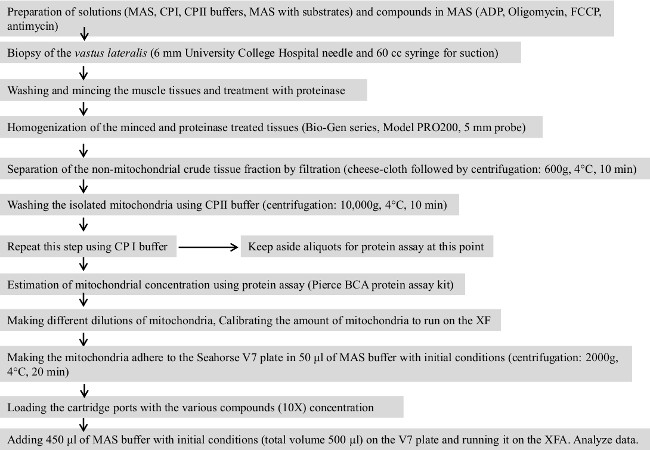 Figure 1. Flowchart of the entire protocol. Please click here to view a larger version of this figure. 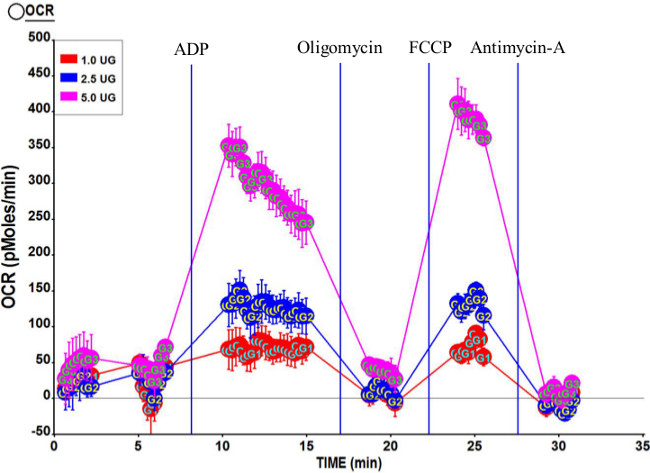 Figure 3. Representative respirometric profile of mitochondria isolated from human Vastus lateralis. Three concentrations of isolated mitochondria, 5.0 μg, 2.5 μg, and 1.0 μg were used in this assay. Final concentrations of compounds after port injections were 2 mM ADP (port A); 2 μM oligomycin (port B); 6 μM FCCP (port C); and 2 μM antimycin A (port D). Calculated RCR for this run was 7.95. Please click here to view a larger version of this figure. 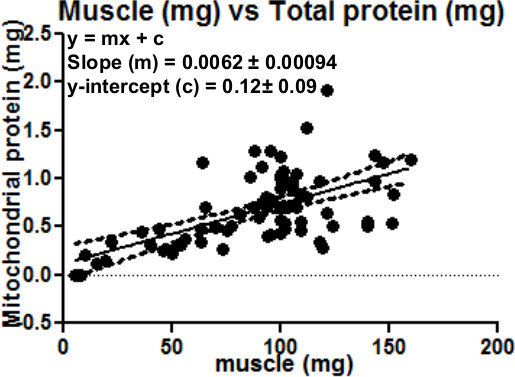 Described is a protocol for muscle biopsy and isolation of functional mitochondria from small tissue samples. This method yields reproducible results between users due to utilization of an automated homogenizer versus hand operated dounce homogenizers. Isolation of mitochondria can be performed with as little as 20 mg of muscle tissue. The amount of isolated mitochondria that can be obtained from this sample size is sufficient to run Seahorse plate-based respirometry while leaving surplus mitochondria for other experiments and storage for further molecular analyses. It may be noted that this method can be translated to the XF 96, where even smaller amounts of mitochondria can be used (1-2 μg per well).

Several protocols for isolating mitochondria rely on dounce homogenizers for initial tissue disruption. A drawback of this method is the hands-on nature of the initial tissue homogenization. The force and speed of the pestle in the homogenizer can vary significantly between operators 6. This can result in experiment-to-experiment variation, as well as lab-to-lab variation, and leads to difficulty in comparing data between experiments. This is of particular concern in human intervention studies when data from participants are collected at separate time points, typically before and after treatment, and potentially at multiple sites. We use an automated homogenizer for a more consistent approach that yields more reproducible results with limited person-to-person variation. The speed of preparation also makes this approach suitable for handling multiple samples at the same time. Typically, up to three experiments can be performed in a single day.

Potential limitations of the technique described here arise from the use of isolated organelles and the use of a plate-based format. For example, Picard et al. have demonstrated that isolated mitochondria possess functional characteristics that differ fundamentally from those of intact mitochondria in permeabilized myofibers. They proposed that mitochondrial isolation techniques result in altered bioenergetic function, such as significantly increased RCR compared to permeabilized myofibers accompanied by greater reactive oxygen species production 13. Compared to permeabilized muscle fibers, isolation of mitochondria does require longer preparation time. Also, loss of cellular content diminishes physiological relevance, something that is retained in whole cells and even permeabilized fibers. The use of plate-based respirometry with the described technique permits replicate runs per sample. However, mitochondria must adhere to the bottom of each well. This configuration is different from their normal environment and may affect functional characteristics. In addition, it should be noted that using this protocol for mitochondrial isolation, there may still be contamination from endoplasmic reticulum (ER) in the mitochondrial preparation. Differences in ER contamination may affect the determination of mitochondrial yield and influence results.

In conclusion, this study presents data that confirms that mitochondria isolated from tissues using this procedure are functionally active and can be used for studies/applications that require high-quality isolated mitochondria from minimal amount of skeletal muscle samples. The advantage of this method is that: i) it is possible to isolate mitochondria from minimal quantities of skeletal muscle, ii) the procedure is quick, iii) with the plate based technology, it is possible to run multiple samples at the same time, and iv) there is enough surplus tissue and isolated mitochondria after the bioenergetic assay for sample storage and other molecular biological investigations.

We would like to thank Dr. Marc Liesa, Boston University School of Medicine, helpful discussions; Ms. Karin Murphy, Ms. Heather Gregory, and Mr. John Stone, all from Wake Forest School of Medicine, for helpful technical assistance in the development of this protocol. 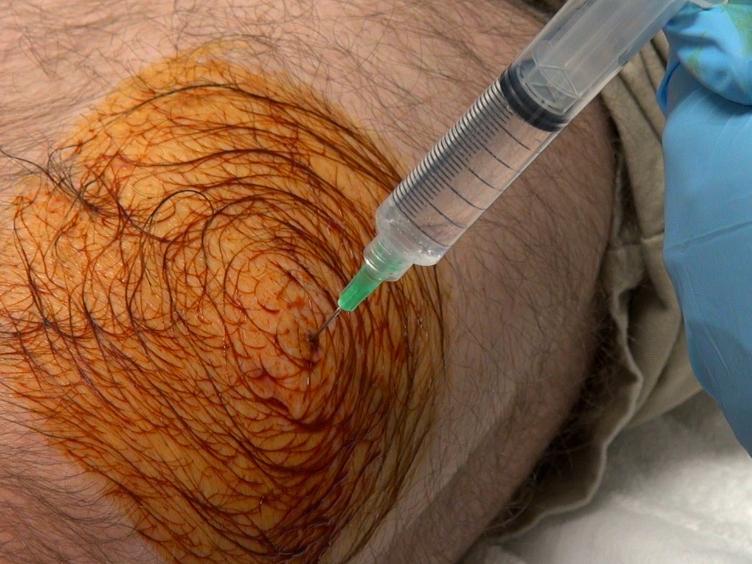