Stereo-electroencephalography (SEEG) aids in localization of epileptogenic zones, however, remains relatively underutilized in the United States. The goal of this abstract is to provide a brief introduction to the technique of SEEG and further a detailed technique of using robotic assistance in the placement of SEEG electrodes.

SEEG is a method and technique which is used for accurate, invasive recording of seizure activity via three dimensional recordings. In epilepsy patients who are deemed appropriate candidates for invasive recordings, the decision to monitor is made between the subdural grids versus SEEG. Invasive neuromonitoring for epilepsy is pursued in patients with complex, medically refractory epilepsy. The goal of invasive monitoring is to offer resective surgery with the hope of allowing seizure freedom. SEEG's advantages include access to deep cortical structures, an ability to localize the epileptogenic zone (EZ) when subdural grids have failed to do so, and in patients with non-lesional extra-temporal epilepsies. In this manuscript, we present a succinct historical overview of the SEEG and report on our experience with frameless stereotaxy under robotic. An imperative step of SEEG insertion is planning the electrode trajectories. In order to most effectively record ictal activity via SEEG trajectories should be planned based upon a hypothesis of where the seizure activity originates the presumed epileptogenic zone (EZ). The EZ hypothesis is based on a standardized preoperative workup including video-EEG monitoring, MRI (magnetic resonance imaging), PET (positron emission tomography), ictal SPECT (Single-photon emission computed tomography), and neuropsychological assessment. Using a suspected EZ, SEEG electrodes can be placed minimally invasively yet maintain accuracy and precision. Clinical results showed the ability to localize the EZ in 78% of difficult to localize epileptic patients.1

In medically refractory epilepsy there are many non-invasive pre-surgical tools (scalp EEG., magnetic resonance imaging (MRI), functional MRI, single photon emission computed tomography, positron emission topography, and magnetoencephalography). If these non-invasive evaluations fail to sufficiently localize or define the epileptic zone (EZ) then invasive recording may be indicated. Currently, subdural grids or Stereo-electro-encephalo-graphy (SEEG) are the two most prevalent methods of invasive monitoring. SEEG was originally developed in France in the 1950's by Jean Talairach and Jean Bancaud; recently it has mostly been used for invasive monitoring of refractory epilepsy patients in France.2-4 SEEG is the consists of stereotactically inserting intracerebral electrodes into the brain parenchyma to record brain electrical activity for an extended period of time. With the intracerebral electrical recordings many patients are able to have their EZ defined to allow for surgical resection.

Despite this long history of success SEEG remains relatively rarely used for invasive recording in America. However, SEEG does offer several significant advantages; SEEG allows for 1) recording of deep structures, 2) bihemispheric recordings, 3) another recording option if subdural grids failed, and 4) mapping of epileptic networks in three dimensions, mainly in patients where non-lesional extra-temporal epilepsy is suspected.5-7 All of these benefits are achieved without requiring a large craniotomy. A recent technologic advance in SEEG surgery is the used of robotic guidance. This sophisticated development allows for improved operative times but safer and more accurate surgical implantation of electrodes.Recently published literature reviews the results of using two different techniques for SEEG insertion; a more traditional method utilizing stereotactic frames and a newer technique using robotic assistante for SEEG insertion.1, 8,15 the results were similarly successful with each method.

With the advent of improved robotic assistance, the SEEG insertion technique has resulted in improved operative times. The robotic system is classified as a supervisory controlled system which means the surgeon plans the operation off line and implicitly specifies the motion the robot must follow to perform the operation.9 The robotic assist results in expedient transitions from one trajectory to the next for the placement of each intracranial electrode.

4. Return to OR for Removal

Recent results indicate that in one consecutive series of 78 patients who underwent SEEG insertion via robotic assistance had successful localization of the EZ in 76.2% of patients.1 That same study showed of the patients who went on to have surgical resection of EZ had grade 1 Engel seizure freedom in 67.8% of patients (Figure 4). Morbidity rate is 2.5%. Permanent morbidity was noticed is 1 patient (1.2%). Per electrode, it was shown to have a wound infection and intracranial hematoma rate of 0.08%, each. 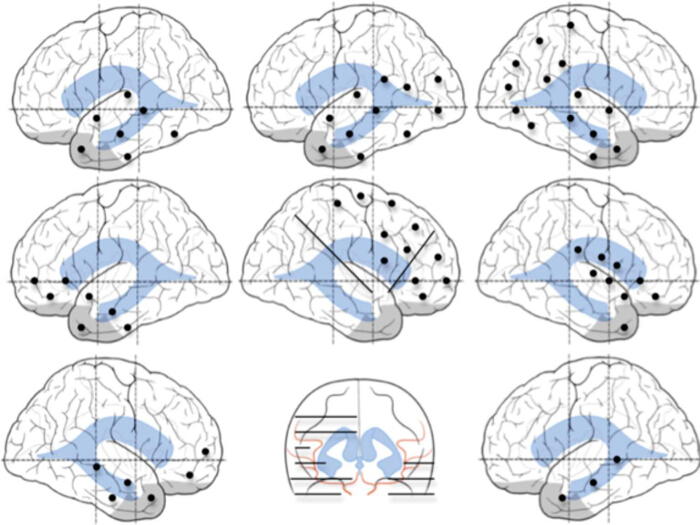 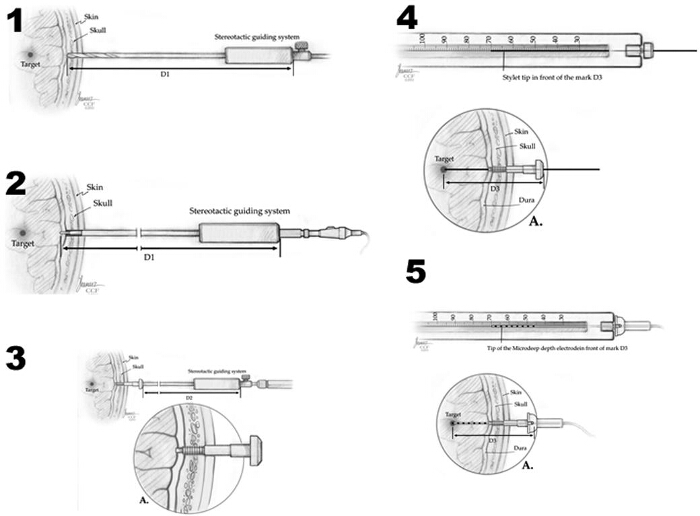 Figure 2. Method of Depth Electrode Implantation. 1) The skull is drilled with a 2.5-mm drill bit, guided by the stereotactic system. 2) The monopolar coagulator probe is inserted and the dura is opened. 3) The implantation bolt is screwed into the skull, also guided by the stereotactic system. 4) The final depth distance for the electrode (D3) is calculated and measured: [(Target-Dura Distance + D1) - D2 = D3]. Initially, the trajectory is created by a stylette probe, guided by the implanted bolt. 5) Final position of the depth electrode, and its fixation into the bolt, preventing displacements and CSF leaks. Reprinted with permission, Cleveland Clinic Center for Medical Art & Photography. Copyright 2011-2013. All rights reserved. Please click here to view a larger version of this figure. 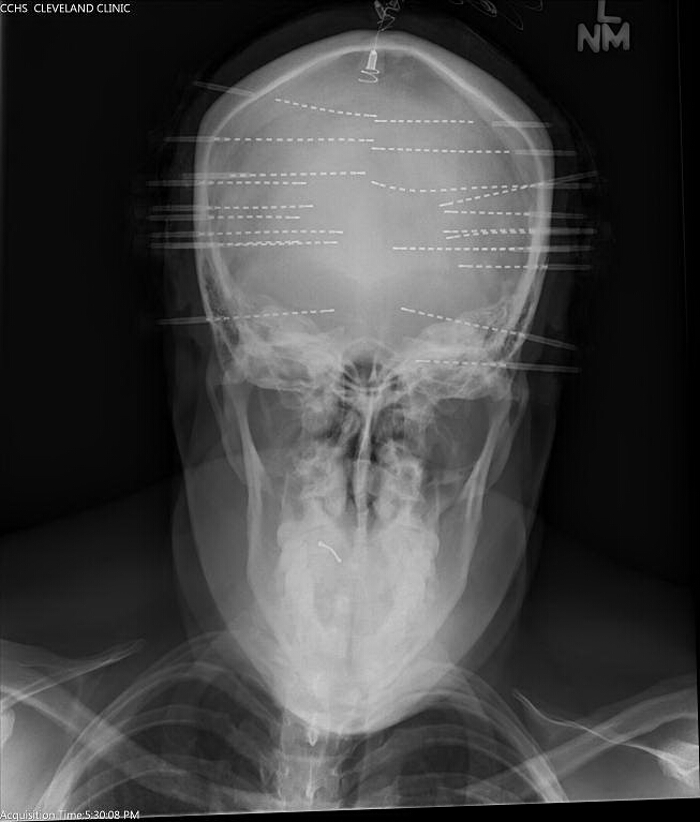 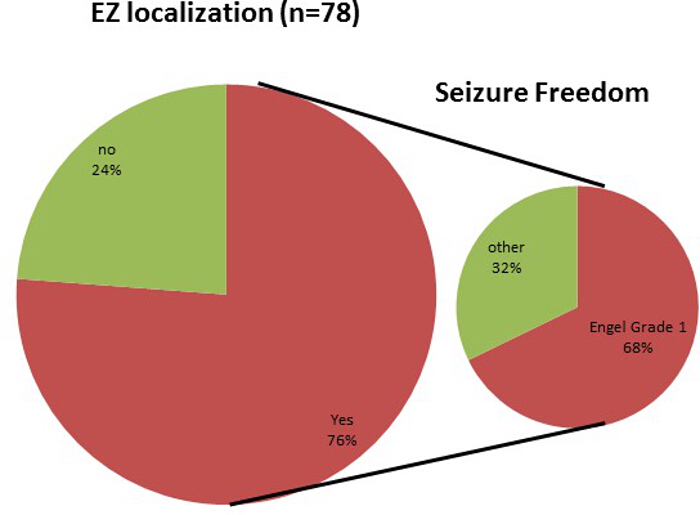 Here is presented the technique of SEEG insertion utilizing robotic stereotactic assistance. While SEEG was originally described using other methods of frame based stereotaxis, robot-assisted SEEG offers not only similar safety but superior accuracy and efficiency. The literature reports success at localizing the EZ in over 76% of cases, which is commiserate with other previous studies using alternative techniques.6,13,.

As with any invasive intracranial procedure, SEEG is not without risk. Fortunately, SEEG insertions have reported a very low risk of complication.15 Most notable, intracranial hemorrhage was the most severe complication10,11. These results are compatible with the current SEEG literature. Utilizing robotic assistance for SEEG is not only safe, but also efficient and accurate, demonstrating to be a promising technique.

While a superior technology, which offers significant improvements on operative time, robotic assistance is not perfect. One limiting factor that must be considered before implementing into one's practice is the initial cost of product acquisition. Depending on individual case numbers this could easily be justified with improvements in OR times alone.

Another crucial step that must not be taken lightly is the critical nature of proper registration prior to placement of the initial depth and all subsequent depths. If a intraoperative concern regarding accuracy arises, the surgery must be halted until accurate registration can be confirmed. The current technique of SEEG insertion not only supplants prior methods but opens up a neurosurgeon's armamentarium to other utilizations. Laser ablation for treatment of epilepsy is a burgeoning field, which has already shown to be amenable to combination with robotic SEEG.12

Another technology that we have begun to utilize with robotic SEEG is implantation of Responsive Neuro-Stimulation System (RNS) The ability of SEEG to demonstrate 3-d functional anatomy while allowing precise and accurate placement of electrodes is of clear benefit when implanting RNS. 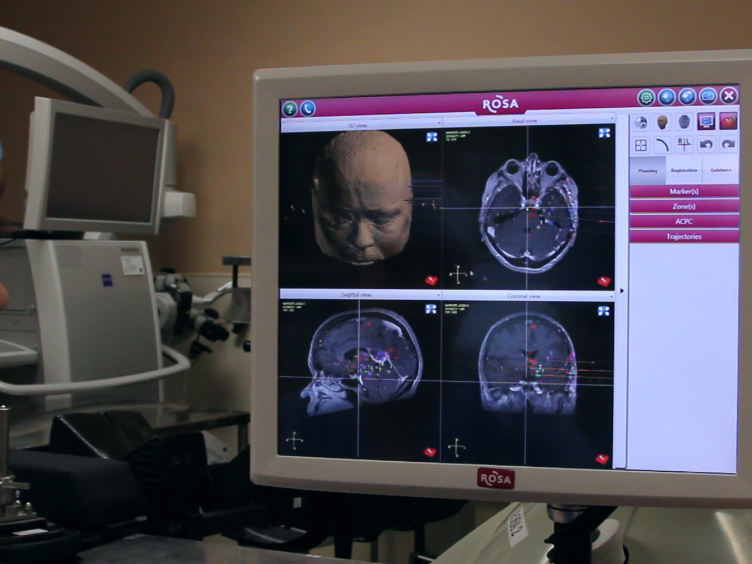