We describe the fabrication of micropatterned hydrogel sheets using a simple process, which can be assembled and manipulated in a freestanding form. Using these modular hydrogel sheets, a simple macro-scaled 3D cell culture system can be generated with a controlled cellular microenvironment.

Hydrogels can be patterned at the micro-scale using microfluidic or micropatterning technologies to provide an in vivo-like three-dimensional (3D) tissue geometry. The resulting 3D hydrogel-based cellular constructs have been introduced as an alternative to animal experiments for advanced biological studies, pharmacological assays and organ transplant applications. Although hydrogel-based particles and fibers can be easily fabricated, it is difficult to manipulate them for tissue reconstruction. In this video, we describe a fabrication method for micropatterned alginate hydrogel sheets, together with their assembly to form a macro-scale 3D cell culture system with a controlled cellular microenvironment. Using a mist form of the calcium gelling agent, thin hydrogel sheets are easily generated with a thickness in the range of 100 - 200 µm, and with precise micropatterns. Cells can then be cultured with the geometric guidance of the hydrogel sheets in freestanding conditions. Furthermore, the hydrogel sheets can be readily manipulated using a micropipette with an end-cut tip, and can be assembled into multi-layered structures by stacking them using a patterned polydimethylsiloxane (PDMS) frame. These modular hydrogel sheets, which can be fabricated using a facile process, have potential applications of in vitro drug assays and biological studies, including functional studies of micro- and macrostructure and tissue reconstruction.

Hydrogels are particularly promising biomaterials, and are expected to be important in basic biology, pharmacological assays and medicine.1 Biofabrication of hydrogel-based cellular constructs has been suggested to reduce the use of animal experiments,2,3 replace transplantable tissues,4 and improve cell-based assays.5,6 Water-containing (hydro-) viscoelastic materials (gels) allow a large number of cells to be encapsulated and maintained in a scaffold structure to control the 3D cellular microenvironment. In combination with the guidance of microfluidic or micropatterning technologies, the geometry of the hydrogel constructs can be precisely controlled at the cellular scale. To date, a variety of shapes of hydrogels, including particles,7-9 fibers,10-12 and sheets,13-15 have been used as building units in bottom-up approaches to the fabrication of macro-scale multi-cellular architectures.

Both hydrogel-based particles and fibers have been readily and rapidly fabricated for applications as micro-scale cellular environments, with fluidic controls using microfluidic devices. However, as the basic units of engineered tissues, it would be complicated to rearrange them and to enlarge their volume as macro-scale constructs.16 It is more difficult to achieve macro-scaled constructs than to produce micron-sized basic modules. Sheet-like units of hydrogel-based constructs can be used to increase the volume of scaffolds via a simple assembly process. Consequentially, stacked layers of hydrogel sheets provide not only a volumetric increase but also a geometric extension in a 3D space.

1. Preparation of the Micropatterned Molds and Hydrogels

2. Prepare the Cell Suspension in a Hydrogel Precursor

We have described the fabrication and manipulation of freestanding cellular hydrogel sheets. As shown in Figure 1, we fabricated micropatterned PDMS molds, and cell-containing hydrogel was loaded onto the hydrophilic surface of these molds and cross-linked using a humidifier to generate an aerosolized mist of gelling agent. Following release from the molds, HepG2 cells were cultured in freestanding hydrogel sheets with various patterns (Figure 2). Thus, the thin hydrogel sheets provided a 3D culture environment. Furthermore, modular hydrogel sheets may be assembled by layering the sheets using a micropipette with an end-cut tip, and using a PDMS frame, which enables 3D macro-scale cell culture (Figure 3). 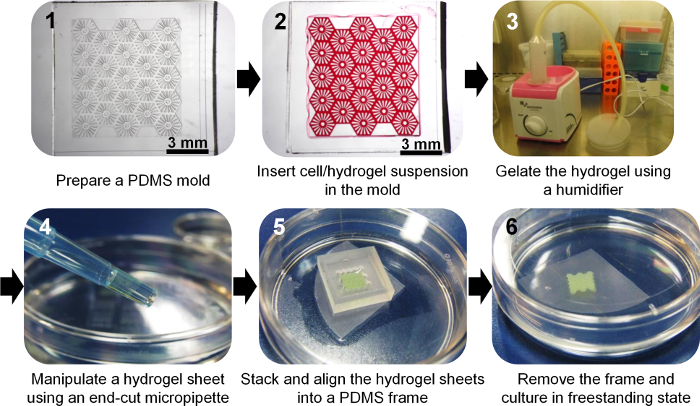 Figure 1. Flow Chart Showing the Fabrication of a Hydrogel Sheet and Multi-layer Hydrogel Sheets. Please click here to view a larger version of this figure. 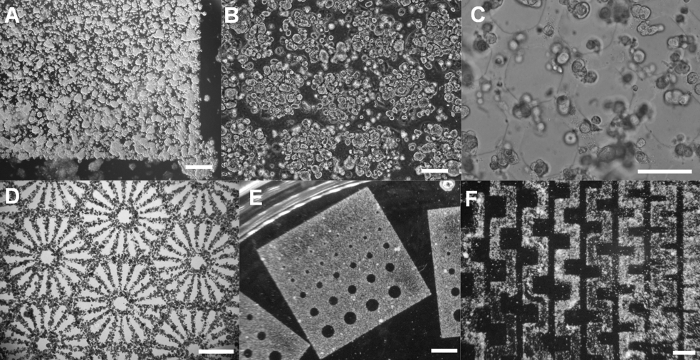 Figure 2. Freestanding 3D Cell Culture in Various Hydrogel Sheets. The fabrication method of spraying cross-linking reagent enabled precise patterning of alginate hydrogel at the micro-scale. Furthermore, the fabricated hydrogel sheets could be harvested from the mold and manipulated easily in freestanding conditions. HepG2 cells were patterned and cultured in a flat hydrogel sheet (A), hydrogel sheets with hexagonal pillars (B), mesh (C), liver lobule-like mesh (D), an array of holes (E), and multiple microcomb-like microfibers (F). The scale bars are as follows: 500 µm (A, D, F), 100 µm (B, C), and 2 mm (E). Please click here to view a larger version of this figure. 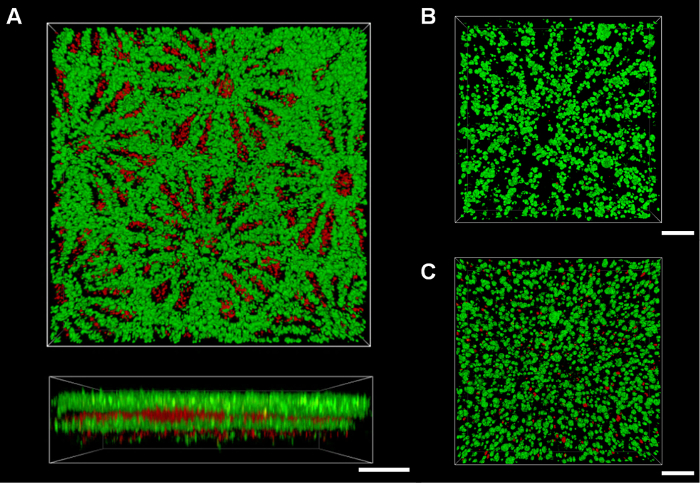 Figure 3. Assembly of Micropatterned Hydrogel Sheets for Macro-scale Cellular Constructs. Various types of hydrogel sheet could be assembled via layer-by-layer stacking with alignment, including the assembly of five hydrogel sheets containing HepG2 cells stained with green fluorescence and NIH3T3 cells stained with red fluorescence (A). An assembly of micropatterned hydrogel sheets with expanded pipeline structure (B) provided higher cell viability than that of non-patterned hydrogel sheets (C) after 7 days. The viability was assessed by staining HepG2 cells with calcein-AM (live cells shown as green) and ethidium homodimer-1 (dead cells shown as red). Scale bars: 500 µm (A) and 200 µm (B, C). Please click here to view a larger version of this figure.

This protocol provides a simple method of fabricating modular hydrogel sheets, and assembling them to form 3D cellular scaffolds.

Moreover, it was also challenging to manipulate the thin hydrogel sheets, which were mechanically stable only in a liquid medium. As shown in Figure 1, the thin hydrogel structure was simply and stably handled and manipulated using an end-cut conventional tip for transferal between different culturing conditions. Using generation and manipulation techniques, we could provide not only a single-layer sheet in a floating manner for potential applications in drug assays but also stacked multi-layer structures, with potential applications as scaffolds for tissue-like constructs.

One limitation of this technique is the absence of cell–matrix interactions in the alginate hydrogel. Alginate cannot provide cell adhesion ligands for in vivo-like cell–matrix interactions;21 however, it does offer mechanical and geometrical effects as a 3D cell-encapsulating scaffold with cell–cell interactions. For primary cells and stem cells, alginate could be used following modification with RGD-containing peptides,21 or in combination with collagen or gelatin.14,18 Another limitation is that, once the cell-embedded hydrogel sheets are fabricated with low cell density below 5 x 106 cells/ml, construction of multi-layered structure could cause weak attachments between the hydrogel sheets because only the edge of the structure is fixed by use of additional alginate. However, the layers can be stacked compactly as a single scaffold via drainage structure under the PDMS frame. In addition, higher density of cells in the hydrogel sheets could proliferate on the surface as well as within the layer after one day culture, which would help attachments between layers as shown in Figure 3A.

The hydrogel sheet fabrication and manipulation technique described here may be adapted to the in vitro culture systems and tissue-like cellular models to provide an in vivo-like microenvironment for applications, including cellular assays and engineering artificial organs. This technique could be applied to cell-based drug assays and biological studies that require geometrically different 3D cellular micro- and macroenvironments that incorporate various cells or hydrogel types.

This research was supported by a National Leading Research Laboratory Program (Grant NRF-2013R1A2A1A05006378) through the National Research Foundation of Korea funded by the Ministry of Science, ICT and Future Planning. The authors also acknowledge a KAIST Systems Healthcare Program. 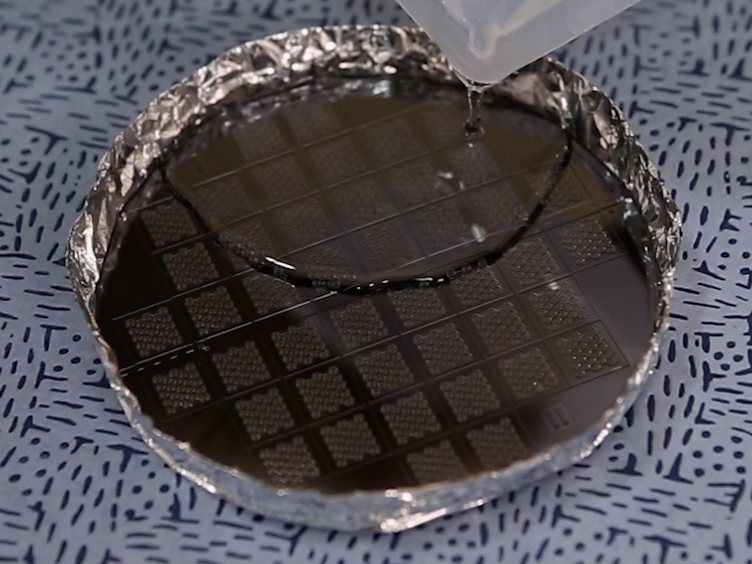