The goal of this protocol is to assess specificity of anticancer drugs in vitro using mixed cultures containing both tumor and non-tumor cells.

A procedure for assessing specificity of anticancer drugs in vitro using cultures containing both tumor and non-tumor cells is demonstrated. The key element is the quantitative determination of a tumor-specific genetic alteration in relation to a universal sequence using a dual-probe digital PCR assay and the subsequent calculation of the proportion of tumor cells. The assay is carried out on a culture containing tumor cells of an established line and spiked-in non-tumor cells. The mixed culture is treated with a test drug at various concentrations. After the treatment, DNA is prepared directly from the survived adhesive cells in wells of 96-well plates using a simple and inexpensive method, and subjected to a dual-probe digital PCR assay for measuring a tumor-specific genetic alteration and a reference universal sequence. In the present demonstration, a heterozygous deletion of the NF1 gene is used as the tumor-specific genetic alteration and a RPP30 gene as the reference gene. Using the ratio NF1/RPP30, the proportion of tumor cells was calculated. Since the dose-dependent change of the proportion of tumor cells provides an in vitro indication for specificity of the drug, this genetic and cell-based in vitro assay will likely have application potential in drug discovery. Furthermore, for personalized cancer-care, this genetic- and cell-based tool may contribute to optimizing adjuvant chemotherapy by means of testing efficacy and specificity of candidate drugs using primary cultures of individual tumors.

An essential issue is therefore the development of a method for determination of the proportion of tumor cells in mixed cultures including primary cultures. Toward this challenge, a genetic solution was conceived which is based on determination of the quantitative ratio of a tumor-specific genetic feature to a universal reference sequence. From this ratio, the proportion of tumor cells in a mixed culture can be calculated.

This study illustrates the procedure of the genetic and cell-based tool for assessing specificity of anticancer drugs including (1) preparing a mixed culture from tumor cells of an established line and non-tumor fibroblasts, (2) treating the mixed culture with a test drug, (3) preparing DNA for digital PCR, (4) determining the ratio of an tumor-specific heterozygous deletion to a reference sequence using a dual-probe droplet digital PCR assay, (5) calculating proportions of tumor cells at each drug concentration and (6) drawing up dose-dependent change of proportion of tumor cells.

Quality of DNA prepared using the combined HotShot/Drop-Dialysis is sufficient for satisfactory digital PCR (Figure 1B). For 2,000 fibroblasts, approximately 3,000 ± 500 positive droplets were obtained, corresponding to 75% of the expected 4,000 copies (two copies in one cell). In this study, the tumor cells were from an established line MPNST S462 which are known to have a heterozygotic deletion of the NF1 gene5. This 50% gene dosage reduction was clearly detected by the dual digital PCR assay (Figure 1B). By contrast, two copies of this gene were measured in fibroblasts. This genetic difference between tumor and non-tumor cells enables calculation of the proportion of tumor cells in mixed cultures (Figure 2). By measuring the relative gene dosage of NF1 to RPP30, proportion of tumor cells in a mixed culture can be determined at each drug-concentration (Figure 3). 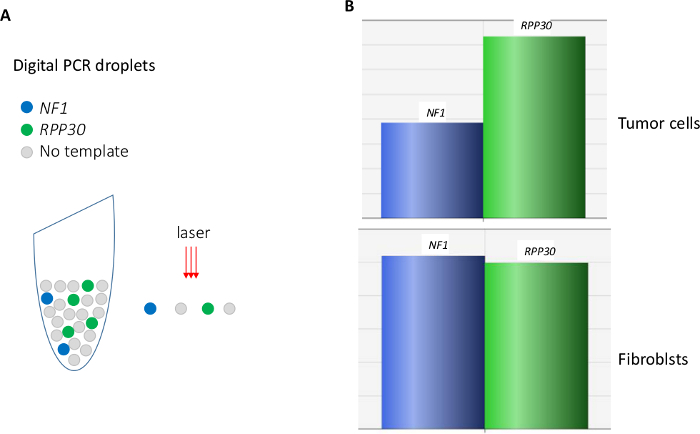 Figure 1. Digital PCR. (A) illustration of the principle. (B) a dual-probe assay reveals reduced amount of a target (NF1) gene in the tumor cells MPNST S462 in relation to a reference (RPP30) gene. Please click here to view a larger version of this figure. 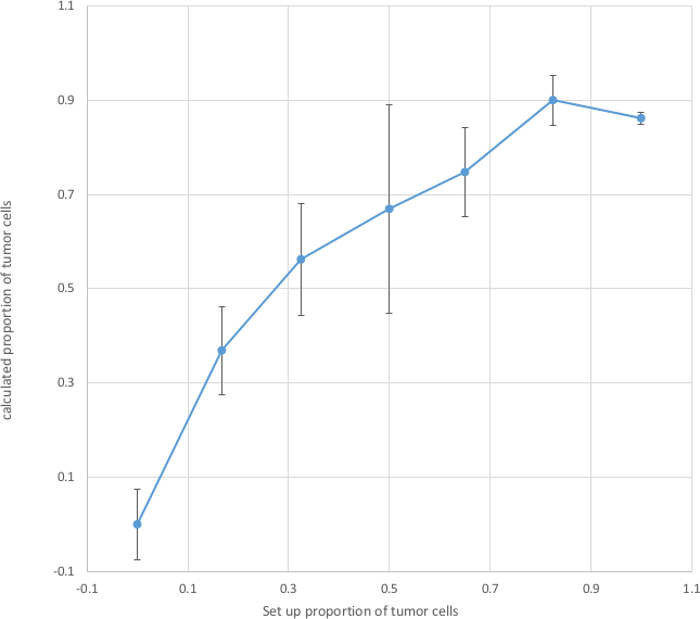 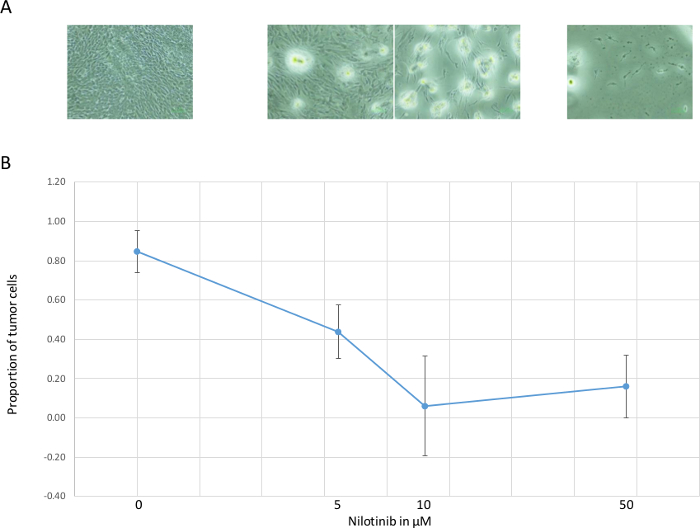 Figure 3. Dose-dependent Change of Proportion of Tumor Cells. (A) dose-dependent reduction of visible vital cells. (B) proportion of tumor cells (mean and standard deviation of 4 replicates) calculated from the ratio of NF1: RPP30, decreased in the range of 0 - 10 µM. At the highest dose 50 µM, few vital cells were left, likely due to toxic effect to all cells. Please click here to view a larger version of this figure. 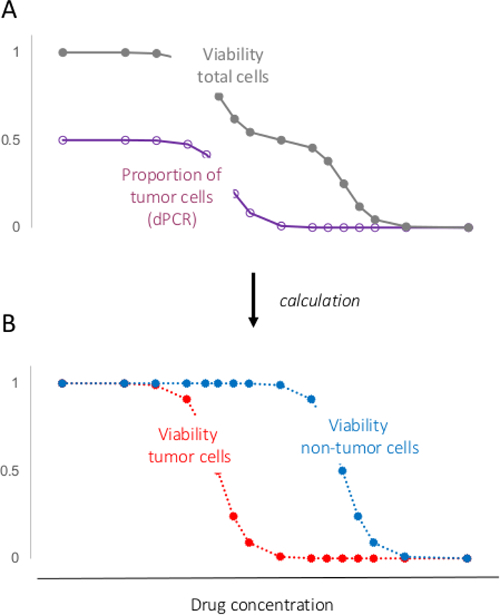 The key step in this genetic- and cell-based tool for assessing drug specificity in vitro is the determination of proportion of tumor cells using one or more tumor-specific genetic features. In contrast to conventional phenotypic features7, genetic features are specific, stable and easy to quantify. For example, a tumor-specific mutation or copy number variation is present exclusively in the tumor cells but not in non-tumor cells. Such a genetic stigma can be reliably and precisely quantified, for example, using digital PCR as demonstrated in this study.

For digital PCR, high purity of DNA is not essential. However, desalting and removing inhibitory molecules are necessary which can be achieved by a drop-dialysis using a suitable filter. The combined lysis and drop-dialysis is simple and quick, requires no special instruments and therefore can be carried out in any standard laboratory. If the cells do not break well, additional treatment can be considered such as freezing the cells at -20 °C, adding detergent or/and using protease.

In the present study, the heterozygous deletion of the NF1 gene was used as the tumor-specific feature for the quantification. Similarly, deletions of other genes or loci can also be used. Furthermore, mutations can also be used for quantifying tumor cells. In such case, digital PCR assays for the mutant and the normal alleles need to be extensively validated to ensure their specificity for each of them.

Dose-dependent proportion of tumor cells provides an indication for drug-specificity or selectivity. Furthermore, it also enables extracting response of tumor cells from the response of total cells of a mixed culture to a drug (Figure 4). This extraction strategy provides a solution for the technical problem in using primary cultures (which contains both tumor and non-tumor cells) for drug-testing.

The genetic- and cell-based in vitro tool demonstrated in the present study may therefore have application potential (1) in drug-discovery where it provides a platform for assessing drug specificity or selectivity in vitro and (2) in personalized cancer care where it enables testing drugs in primary cultures and consequently may contribute to drug-selection in adjuvant chemotherapy4. Furthermore, pharmacological mechanism of a drug can be studied using this tool, since certain genetic alteration or multiple genetic alterations can be followed during the drug-treatment.

A difficulty in using individualized primary cultures is the lack a universal genetic feature for the quantification of the tumor cells. However, with today's advance in whole-genome sequencing, the most frequently altered genes and regions are known for common tumors. For example, among head and neck tumors, 71%, 23% and 22% have mutations in the TP53, FAT1 and CDKN2A genes, and 60%, 34% and 26% have deletions in the gene regions of CDKN2A, STK11 and PTEN, respectively10. Screening 5 to 10 such genes or/and regions by means of targeted-sequencing or/and digital PCR will therefore likely identify one or more genetic alterations which can be used for the quantification of tumor cells in the derived primary culture. Another limitation is the often insufficient amount of resected tumors for setting up primary cultures.

Despite the advantageous features and promising application potential of the genetic- and cell-based in vitro tool, its limitations should be kept in mind and its in vitro nature should be emphasized. For example, the differential effects or cytotoxicity of a drug on tumor cells may rather due to difference in cell types (fibroblasts vs. Schwann cells) or their different origins (from different individuals). The stronger effect of a drug on tumor cells than on non-tumor cells may also be explained by the fact that the former grow faster than the latter. Most importantly, cells in vitro behavior differs than cells in the human body and consequently, results of in vitro assessment often do not or only partially reflect the real clinical situation. Therefore, efficacy, cytotoxicity and specificity of drugs obtained for cultured cells are rather of biomarker nature but do not have the reliability of preclinically measured efficacy of antibiotics. Nevertheless, moving from cell lines to mixed cultures and/or primary cultures is a step forward in assessing drug-effect and specificity/selectivity in vitro. With extensive efforts, in vitro conditions may be found which enables reasonable correlation of in vitro data with real responses of patients, at least for some drugs.

Mrs. Alster, Mr. Honrath and Dr. Jiang are appreciated for their outstanding technical assistance. Also appreciated is Dr. Volz and the research group of Dr. Dandri for providing the access to their digital PCR device. 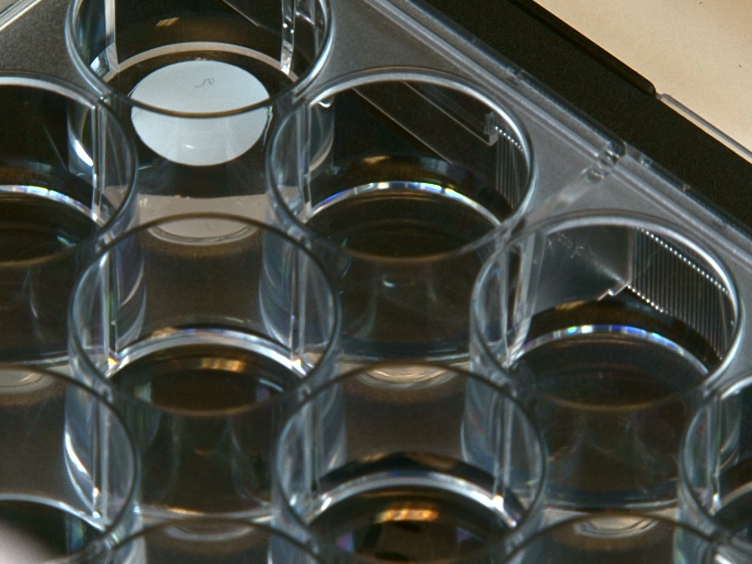