We have established a model of pericardial patch angioplasty that can be used in either small-diameter veins or arteries. This model can be used to compare venous and arterial neointimal hyperplasia formation.

Pericardial patches are commonly used in vascular surgery to close vessels. To facilitate studies of the neointimal hyperplasia that forms on the patch, we developed a rat model of patch angioplasty that can be used in either a vein or an artery, creating a patch venoplasty or a patch arterioplasty, respectively. Technical aspects of this model are discussed. The infra-renal IVC or aorta are dissected and then clamped proximally and distally. A 3 mm venotomy or arteriotomy is performed in the infrarenal inferior vena cava or aorta of 6 to 8 week-old Wistar rats. A bovine pericardial patch (3 mm x 1.5 mm x 0.6 mm) is then used to close the site using a 10-0 nylon suture. Compared to arterial patches, venous patches show increased neointimal thickness on postoperative day 7. This novel model of pericardial patch angioplasty can be used to examine neointimal hyperplasia on vascular biomaterials, as well as to compare the differences between the arterial and venous environments.

Vascular surgeons commonly close blood vessels with pericardial patches, either bovine or porcine, to reduce the risk of restenosis1,2. In arterial surgery, pericardial patch angioplasty reduces the rate of restenosis compared to a primary closure3,4. Patch venoplasty is also similarly performed to close veins, although less frequently when compared to arterial procedures5,6. Patches typically develop neointimal hyperplasia on their luminal surfaces; however, the mechanism of neointimal formation remains unclear, especially in the comparison of differences in neointimal formation between the arterial and venous environments. We previously showed that pericardial patches attract progenitor cells in both the arterial and the venous environments and that venous patch angioplasty shows more aggressive neointimal formation as compared to the arterial patches7,8.

In this study, we describe the rat model of pericardial patch angioplasty that is common to closing both veins and arteries and that may be used to study neointimal formation; this method is a small-animal model of an operative technique commonly used in human patients. The rat model has a larger diameter than the mouse model, facilitating technical aspects of the surgery and improving the learning curve for the model.

Approval by the appropriate Institutional Animal Care and Use Committee must be obtained, indicating that your protocol follows the guidelines of your institution's animal research ethics committee.

After the patch angioplasty, there was no thrombosis in either the venous (n = 42) or arterial (n = 24) patch groups. Survival at day 7 was 100% in both groups with either a venous or arterial patch.

The patches were harvested on day 7 and stained with hematoxylin and eosin, and the neointimal thickness was compared as previously described7. Because of the distinct morphological difference between the patch and the neointima, it is very easy to discriminate the neointima. In the venous patch, there was a distinct layer of thick neointima on the luminal side of the patch, with more cells accumulated in the neointima (Figure 2A, 2C); in the arterial patch, there was a much thinner neointimal layer, with only a few cells attached to the luminal side of the patch (Figure 2B, 2D). The neointima was significantly thicker in the venous patch compared to the artery patch (Figure 2E). Similar results were obtained on day 14 (data not shown). These results show that the patch venoplasty model is superior over other models to acquire a thick neointima in a short period of time. 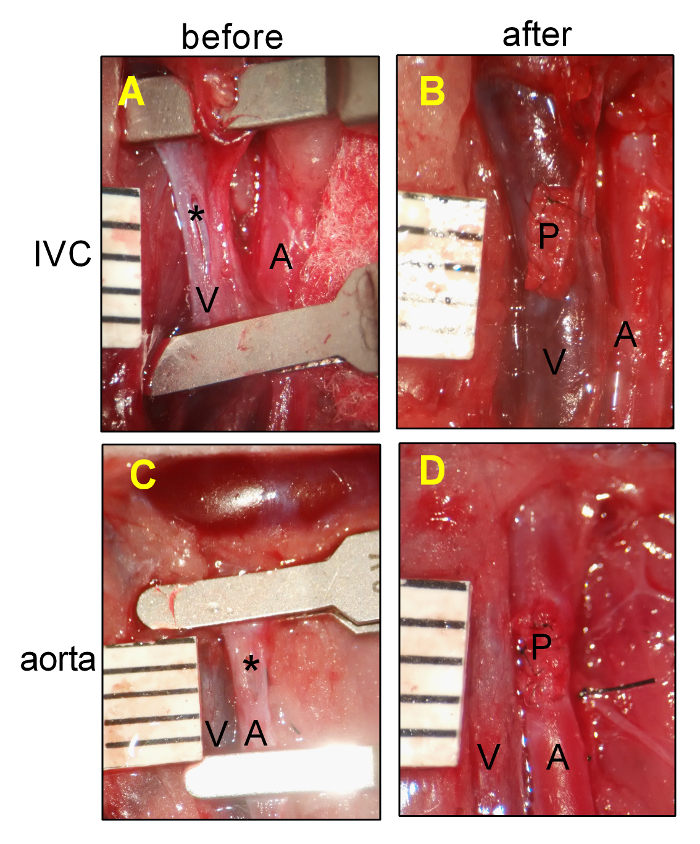 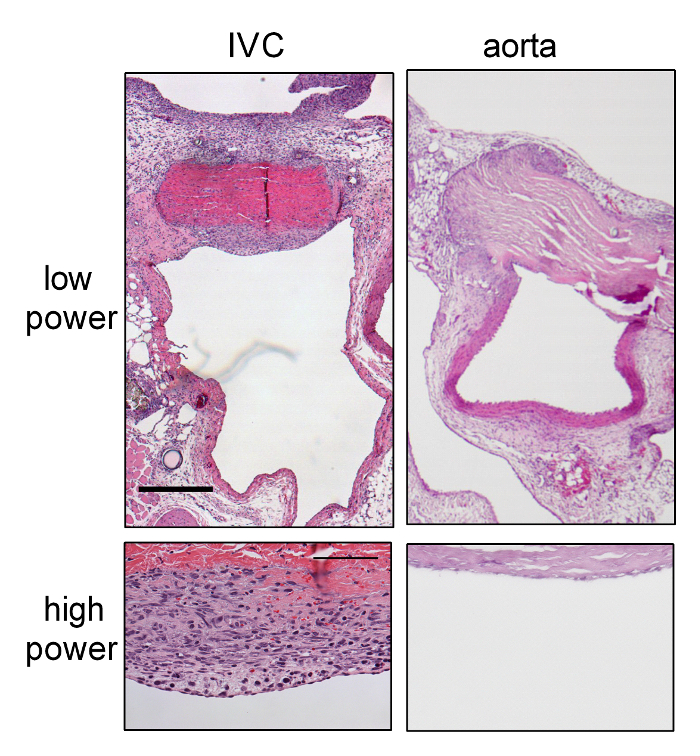 We describe a patch angioplasty model in the rat that can be used in either veins or arteries, creating a patch venoplasty or patch arterioplasty, respectively. Using this pericardial patch model, we showed aggressive and stable neointimal hyperplasia in the rat IVC venoplasty compared to the aortic arterioplasty (Figure 2)7,8.

Several technical aspects are notable. In the aortic arterioplasty, it is important that the sutures are tight and adequate in number and/or spacing to prevent leakage of blood in the higher pressure of the arterial environment. In the IVC venoplasty, it is important to perform all of the operative maneuvers with particular care and gentleness, as the IVC wall is extremely thin and fragile. In addition, lumbar and small tributary veins around the implantation site must be carefully dissected and ligated to prevent bleeding. In both arterial and venous procedures, the distal clamp is removed first to vent any luminal air and to avoid a pulmonary air embolism. The proximal clamp is then removed to restore the distal blood flow. Lastly, when puncturing the aorta or IVC wall, do not puncture the posterior wall; if the posterior wall is punctured, a 10-0 suture should be used to close the hole.

A disadvantage of the patch angioplasty in the aorta is the development of pseudoaneurysms at later times (e.g., post-operative day 30). However, there were rarely any pseudoaneurysms observed on post-operative days 7 or 14, suggesting the utility of this model during the first 2 weeks after the procedure to study neointimal formation in either the venous or the arterial environment7,9.

Small-animal patch angioplasty has several advantages compared to interposition graft models. First, the host vessel does not need to be transected, as only an anterior wall incision is made; this reduces surgical time and minimizes the risk of bleeding. Second, the interposition graft requires two anastomoses, increasing the operative time and risk for complications, as well as extending the learning curve. Patch angioplasty requires only a single anastomosis, reducing the operative time and the risk of complications. Third, patch angioplasty intrinsically reduces the risk of stenosis at the anastomotic site, potentially allowing an increased time for postoperative observation10.

In conclusion, we describe a method to perform patch angioplasty that uses pericardial patches to close small-diameter vessels; the procedure is equally applicable to both veins and arteries. Pericardial patch venoplasty shows more aggressive neointimal formation compared to the arterioplasty model at early postoperative times. This result suggests the utility of this model in determining the differences in interactions between the venous and the arterial environments with implantable biomaterials. In addition, different types of patch compositions can be examined to test the response to these different materials.

This work was supported in part by the National Institutes of Health Grants R56-HL095498, R01-HL-095498 (to AD), R01-HL128406, the Merit Review Award I01-BX002336 from the United States Department of Veterans Affairs Biomedical Laboratory Research and Development Program (to AD), a Yale Department of Surgery Ohse award (to AD), a Sarnoff Cardiovascular Foundation Fellowship (to JMS), and through the resources and the use of facilities at the Veterans Affairs Connecticut Healthcare System (West Haven, CT). Bovine pericardial patches were generously provided by LeMaitre Vascular Inc. (Burlington, MA). 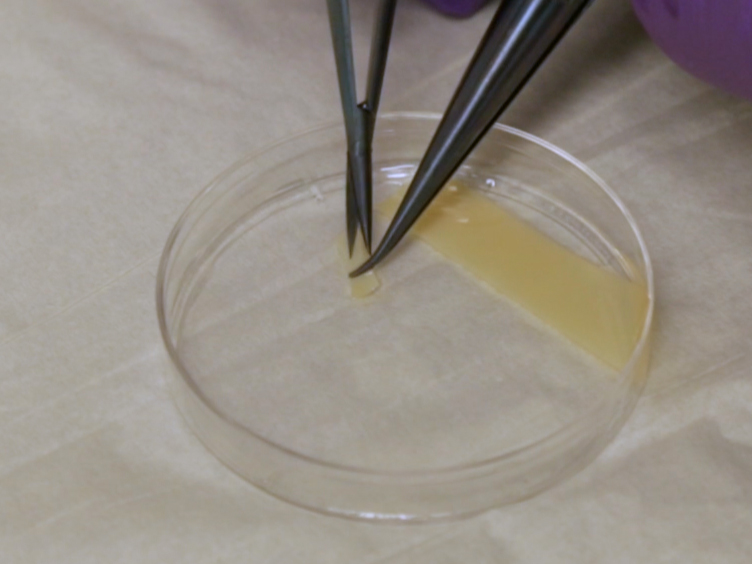