We herein describe a phagocytosis assay using the dispersed embryonic cells of Drosophila. It enables us to easily and precisely quantify in vivo phagocytosis levels, and to identify new molecules required for the phagocytosis of apoptotic cells.

The molecular mechanisms underlying the phagocytosis of apoptotic cells need to be elucidated in more detail because of its role in immune and inflammatory intractable diseases. We herein developed an experimental method to investigate phagocytosis quantitatively using the fruit fly Drosophila, in which the gene network controlling engulfment reactions is evolutionally conserved from mammals. In order to accurately detect and count engulfing and un-engulfing phagocytes using whole animals, Drosophila embryos were homogenized to obtain dispersed cells including phagocytes and apoptotic cells. The use of dispersed embryonic cells enables us to measure in vivo phagocytosis levels as if we performed an in vitro phagocytosis assay in which it is possible to observe all phagocytes and apoptotic cells in whole embryos and precisely quantify the level of phagocytosis. We confirmed that this method reproduces those of previous studies that identified the genes required for the phagocytosis of apoptotic cells. This method allows the engulfment of dead cells to be analyzed, and when combined with the powerful genetics of Drosophila, will reveal the complex phagocytic reactions comprised of the migration, recognition, engulfment, and degradation of apoptotic cells by phagocytes.

In metazoan animals, e.g. the nematode Caenorhabditis elegans, the fruit fly Drosophila melanogaster, and mice and humans, a large number of cells undergo apoptosis during development to shape their bodies and in adulthood to maintain homeostasis1,2. Apoptotic cells need to be rapidly removed because they induce inflammation in the surrounding tissues by releasing immunogenic intracellular materials if not completely removed3. In order to facilitate rapid removal, apoptotic cells present so-called eat-me signals that are recognized by the engulfment receptors of phagocytes, and are eliminated by phagocytosis3,4,5,6. Thus, phagocytosis plays a crucial role in the maintenance of host homeostasis, and hence, elucidating the molecular mechanisms underlying the phagocytosis of apoptotic cells is of importance.

The mechanisms responsible for the phagocytosis of apoptotic cells appear to be evolutionally conserved among species in the nematodes, flies, and mice7. Several phagocytosis assays are currently available to assess the engulfment of apoptotic cells in these model animals. In C. elegans, 131 somatic cells undergo programmed cell death during development, and cell corpses are phagocytosed by neighboring cells, which are non-professional phagocytes8. Thus, counting the number of remaining cell corpses in C. elegans indicates the level of phagocytosis in vivo. By searching for nematode mutants that show an increased number of dead cells, several genes required for phagocytosis have been identified and genetically characterized9,10,11,12.

6. Measure the Level of Phagocytosis of Apoptotic Cells

In Drosophila, there are two signaling pathways for the engulfment of apoptotic cells. Two phagocytosis receptors for the corresponding pathways, Draper and integrin αPS3βν, independently recognize dead cells19,21,23,24,25. Draper is a transmembrane protein which possesses atypical epidermal growth factor (EGF)-like sequences in the extracellular region and the two phosphorylatable motifs NPxY and YxxL in the intracellular portion26. Integrin αPS3βν is also a transmembrane receptor consisting of a heterodimer of α and β subunits25. Figure 1B shows the ratio of phagocytosing hemocytes to total hemocytes in wild-type or drpr or Itgbn single mutant embryos. By counting all Croquemort-positive cells (total hemocytes) and Croquemort- and TUNEL-double positive cells (phagocytosing hemocytes), we calculated the phagocytic index as the number of phagocytosing hemocytes to the total number of hemocytes. The phagocytic index was lower in the drpr or Itgbn mutant than in the wild type, while the numbers of hemocytes and apoptotic cells were similar (Figure 1C-D), indicating that these two genes are required for apoptotic cell engulfment, as previously reported.

When an anti-Croquemort antibody is not available or mutant lines with altered Croquemort expression are examined, we need to select another option to detect hemocytes. Embryos with a GAL4 driver controlled by a hemocyte-specific promoter (srpHemo-GAL4), and the GFP gene controlled by an upstream activation sequence (UAS) including the GAL4-binding site (UAS-EGFP), have GFP-labeled hemocytes27, which enables us to detect hemocytes using anti-GFP. Figure 2A shows an image obtained after detecting hemocytes and apoptotic cells with immunostaining using an anti-GFP antibody, and TUNEL in embryonic cells with srpHemo-GAL4UAS-EGFP. While an anti-Croquemort antibody stains small granules in cells, an anti-GFP antibody stains whole hemocytes. Similar to Figure 1A, 2 - 6% GFP-positive cells and 1 - 5% TUNEL-positive cells are observed in all embryonic cells. Some TUNEL-positive cells are detected inside GFP-positive cells, which are considered to be phagocytosed dead cells. RNAi-mediated knockdown is easily applied to assess any genes for their involvement in phagocytosis by crossing flies with the UAS-dsRNA of the candidate genes with srpHemo-GAL4UAS-EGFP. The RNAi-mediated knockdown of drpr or Itgbn reduced the phagocytic index (Figure 2B), whereas the numbers of hemocytes and apoptotic cells in embryonic cells was comparable (Figure 2C-2D), indicating again that these phagocytosis receptors are involved in the phagocytosis of apoptotic cells. Similar phagocytic indexes are obtained from both hemocyte detection methods, suggesting that both are compatible. 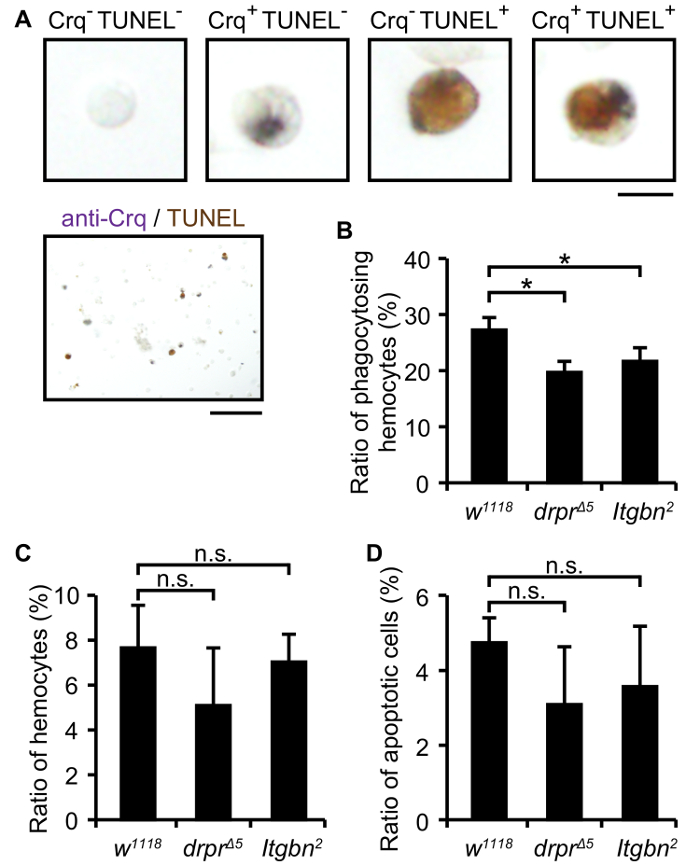 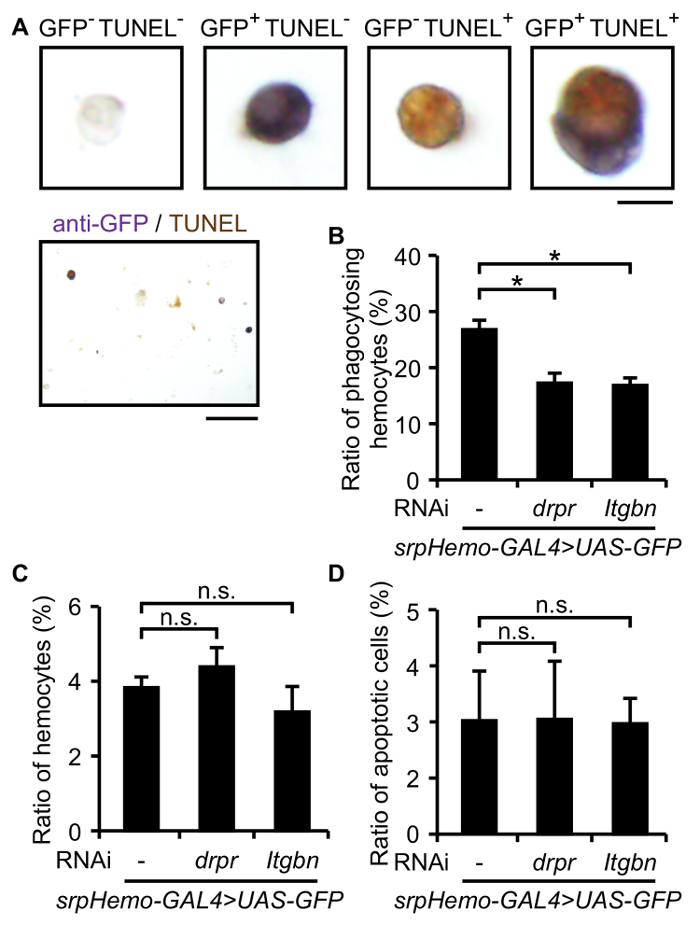 In this protocol, although quantification of the level of phagocytosis is fast and precise, some information such as the site of engulfment or distribution of hemocytes is lost. We previously showed that this assay and an in situ phagocytosis assay using whole embryos produced similar results in terms of the phagocytic index21. Therefore, we recommend performing an in situ phagocytosis assay in parallel in order to accurately interpret the results obtained in some cases.

Drosophila have another professional phagocyte, glial cells, in the central nervous system. Although we do not describe how to assess the phagocytosis of apoptotic neurons by glial cells in embryos in this protocol, the same protocol is applied to quantify the level of engulfment as that reported by Kuraishi et al., EMBO.J21. Likewise, this assay suggests that TUNEL positive cells in Drosophila embryos are likely to be phagocytosed by non-professional phagocytes. Phagocytosis by those unidentified phagocytes with unknown engulfment receptors might explain the result (Figure 1D) that the total number of apoptotic cells in embryonic cells seems not to be increased in a phagocytosis gene mutant.

In conclusion, this protocol has successfully led to the discovery of genes required for the phagocytosis of apoptotic cells by professional phagocytes.24,25,28. Based on the evolutionary conservation of the molecular mechanisms underlying phagocytosis7, revealing gene functions in Drosophila embryos that involve complex phagocytosis reactions may provide meaningful insights into the phagocytic clearance of dead cells, which is related to inflammatory disorders and autoimmune diseases in mammals29.

We are grateful to Kaz Nagaosa and Akiko Shiratsuchi for their advice. 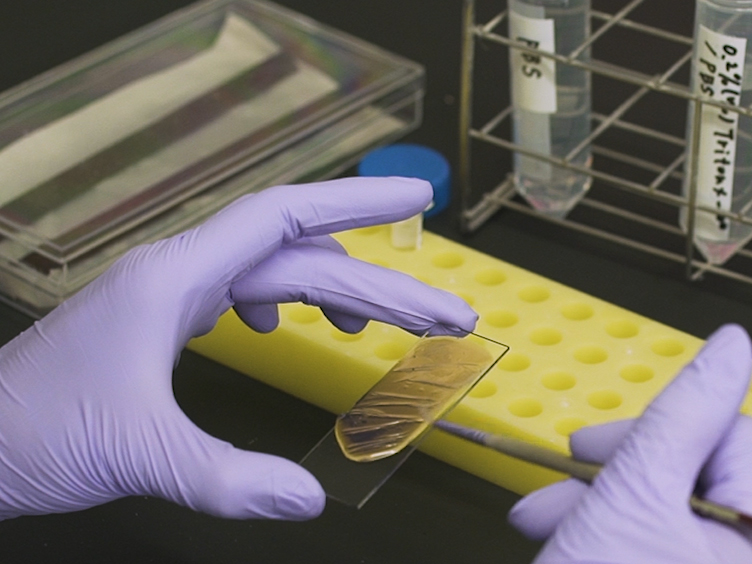