Measuring the concentration is a fundamental step of many biochemical assays. Photometric protein determination takes advantage of the fact that the more a sample contains light-absorbing substances, the less the light will transmit through it. Since the relationship between concentration and absorption is linear, this phenomenon can be used to measure the concentration in samples where it is unknown.

Determining the concentration of a protein in samples is a fundamental step in many biochemical assays. Photometric determination can be done with small sample sizes. The more a sample contains light-absorbing substances, the less the light will transmit through it. This provides a quantitative measurement of the absorbing substances. These concepts are so fundamental to science that the articles that introduced two of the techniques are in the three most cited papers of all time. This video will show the concepts behind some of the most common photometric protein determination techniques, how they are performed, and how the gathered data is analyzed.

Photometric protein determination is based on the relationship between concentration and light absorbency. This is known as the Beer-Lambert Law, which states that the concentration of a light-absorbing species is proportional to its absorbance.

For direct absorption analysis, the absorbance values of unaltered protein samples are measured. Because of their aromatic side chains, tryptophan and tyrosine residues give the highest absorbance readings at a wavelength of 280 nm.

However, these amino acids-which are two of the least frequently found in proteins-are present in different amounts in every protein, so each determination is unique. To overcome this limitation, more complex assays-that are not dependent on these amino acids-were developed.

One example is the Bradford Assay, where colored dye is added to the sample. The dye, known as Coomassie Blue, responds proportionally-the more protein present, the more binding events with the dye.

Then, protein concentration is determined by measuring the absorbance of the bound Coomassie Blue dye, which absorbs light at 594 nm. However, the Bradford assay is linear over a short range of concentrations, so dilutions are often required before analysis.

The Lowry Method combines the Biuret reagent, an alkaline solution of copper ions that react with peptide bonds, and the Folin-Ciocâlteu reagent, which oxidizes aromatic protein residues. The resulting color change of the sample is proportional to the protein concentration.

The absorbance of the reduced Folin reagent can be determined at 750 nm. Like direct absorption, each protein has a unique response, and must be calibrated for the protein of interest. Now that we've reviewed the basic principles behind some of the most common assays, let's look at how direct absorption and the Bradford assay are performed.

To begin a direct absorption analysis, the spectrophotometer is calibrated with a blank to determine zero absorbance. Standard solutions are prepared for use in creating the calibration curve. Then, an aliquot of the first standard is added to a cuvette, and placed into the spectrophotometer.

The absorbance value at 280 nm is then recorded. This process is repeated for each standard, using a clean cuvette for each run. Once complete, a calibration curve is created by plotting the absorbance versus concentration. The slope of this line is the molar attenuation coefficient, which relates absorbance to concentration.

Next, the unknown sample is added to a cuvette, and the absorbance value is recorded. As the data analysis for the different photometric determination methods is similar, we will cover that after we look at the Bradford assay.

Here, the Bradford protein assay is performed with a BSA standard on a 96-well plate. To begin, BSA stock solutions are prepared.

The unknown solutions are diluted with deionized water to ensure that the concentrations are within the assay's range. Depending on the kit, the Coomassie dye may also require dilution. Then, the calibration curve is set up by adding the BSA standards to the 96-well plate.

Deionized water is added to reach the needed concentration to generate a standard curve. The unknown sample should be added to the plate in triplicates to ensure an accurate measurement is taken. Coomassie dye is next added to each well, mixing with the pipette.

Deionized water is added to an empty well as a blank, to measure the absorbance. After waiting 5 min for the dye to bind, the absorbance is measured in a plate-reader at 590 nm.

Now that we've performed a few assays, let's look at how to analyze the data. Each photometric protein determination method is based on the Beer-Lambert Law.

The measured absorbance of the standards is used to create a calibration curve, which is then used to determine the concentration of unknown samples. This curve can be manually plotted, though newer spectrophotometric tools will create the calibration curve once all standards have been measured. These systems will also calculate protein concentration as unknown samples are analyzed.

Now that we've reviewed how to analyze photometric protein determination data, let's look at some of the ways these procedures are utilized.

The principles of photometric protein determination can also be used to directly measure nucleic acid concentration. The nanodrop spectrophotometer accepts samples of very small volume onto an optically active pedestal. The absorbance is then measured, and the system automatically determines the nucleic acid concentration. Because proteins and other sources can interfere with measurements, sample purity is determined by analyzing the 260 to 280 nm and 260 to 230 nm absorbance ratios. Pure nucleic acids typically yield ratios of approximately 1.8 and approximately 2.0 for DNA and RNA, respectively.

Photometric protein determination can also be used in the production of biomimetic materials, which are inspired from nature to elicit specific cellular responses. Recombinant adhesins are bound to polystyrene beads to simulate bacterial attachment to host cells. The Bradford assay is used to determine the coupling efficiency of the recombinant adhesion to the beads in the production of the biomimetic material.

Alternative photometric protein assays can be used in the detection and characterization of protein antimicrobials. Remazol brilliant blue R dye is covalently bonded to heat-killed bacteria. The protein antimicrobial is incubated in the dyed solution. Then, the sample is centrifuged, and the absorbance of the supernatant at 595 nm is measured using a microplate spectrophotometer. Increased absorbance, by the soluble dye released into the supernatant from the labeled bacteria, is a quantitative measurement of enzymatic activity.

You've just watched JoVE's video on photometric protein determination. This video described the underlying principles of photometric determination, went over general procedures for some common assays, and covered some new advances in techniques. Thanks for watching! 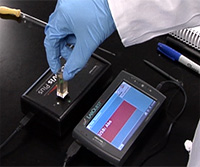