Tandem mass spectrometry begins as a typical mass spec instrument: with an ion source, which converts the sample into ions, and a mass analyzer, which separates the ions based on their mass-to-charge ratio. A common mass analyzer, the quadrupole, only allows ions with a specific ratio through, while the others crash into the rods of the apparatus. The species allowed through, called the precursor ion, is the biomolecule of interest. The ion moves into a collision cell, typically another quadrupole, where energy is applied to fragment the ion in a predictable pattern.

These fragments move into another mass analyzer, such as a time-of-flight, which separates these "product ions". The product ions are then sent to the detector, as in a normal MS instrument. In the case of an unknown protein, the resulting spectrum contains numerous overlapping fragments, making a definitive complete sequence of the biomolecule difficult to generate. However, the spectral pattern is unique for a given protein. Analysis software compares the spectrum to a database of known peptide sequences, elucidating the unknown protein from the overlapping fragments.

Depending on the sample and desired degree of fragmentation, multiple fragmentation methods are possible. Fragmentation patterns depend on how the energy is transferred, its amount, and how it is distributed through the precursor ion. Energy can be transferred via neutral particles, radiation, or electrons. Using neutral atoms, a process called collision-induced dissociation or CID, primarily cleaves at the peptide bond between the amino acids, ideal for their identification.

Now that the basics of the technique have been covered, let's look at CID tandem mass spectrometry being used to study a component of bacterial cell envelopes.

As with all mass spectrometric experiments, the first step is to ionize the sample. For biomolecules, this is typically done with matrix assisted laser desorption or electrospray ionization. The precursor ion signal is then optimized by tuning of the ion optics. Once done, the target is isolated and the fragmentation method is chosen, such as CID.

The strength of an applied voltage, which accelerates the precursor ion into the collision cell, affects the degree of fragmentation. This voltage is increased until the precursor is roughly 10% abundance compared to the highest product ion. Multiple spectra are acquired and averaged until a sufficient signal-to-noise ratio is achieved. The number of scans needed is dependent on the signal intensity of the original precursor ion and can range from 3 to 300.

The analyte in this example, lipid A from Escherichia coli K-12, had 19 major fragments after CID. Lipid A's general structure is well known, allowing software to reconstruct the specific composition from the sample.

Now that we've looked the procedure, let's look at some of the ways tandem mass spectrometry is used in biochemistry.

A common scanning mode in tandem mass spectrometry is selected reaction monitoring, or SRM. In SRM, both mass analyzers are fixed to a selected mass-to-charge ratio, focusing on specific precursor and product ions. Because of SRM's high degree of sensitivity, the spectra of peptide standards of known concentration can be utilized and compared to that of the unknown samples, allowing proteins of interest to be quantified.

Proteins are commonly modified after translation, typically by the addition of functional groups such as methyl groups, phosphate groups, or sugars, known as glycans. These are important in cell signaling processes, elucidating how cells communicate with one another. Because tandem mass spectrometry fragments the proteins into smaller components, it is possible to determine the location of the PTM to the specific fragment or even an amino acid. Some modifications, such as acetylation and trimethylation, are difficult to differentiate by mass alone, so chromatographic separation is performed before the mass spectrometry.

Many analytes in patient's blood are found at concentrations below the limit of detection for typical mass spectrometry. Another advantage of SRM is that it discards all but one product ion, increasing the sensitivity and enhancing the lower detection limit by up to 100 fold. In this example, the immunosuppressant drug, tacrolimus, could be detected at levels of 1 ng/mL.

You've just watched JoVE's video on tandem mass spectrometry. This video described the theory of the instrument, went over a general procedure, and explained some of the ways the technique is currently being utilized. Thanks for watching! 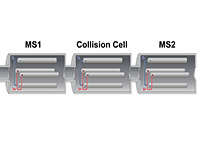