Reconstitution is the process of returning an isolated biomolecule to its original form or function. This is particularly useful for studying membrane proteins, which enable important cellular functions and affect the behavior of nearby lipids. To study the function of purified membrane proteins in situ, they must be reconstituted by integrating them into an artificial lipid membrane.

Reconstitution is the process of restoring an isolated biomolecule to its original form or functionality. This approach is often used when studying membrane proteins, which enable many important cellular processes and affect the behavior of neighboring lipids. However, the complexity of the cell environment makes membrane protein functions difficult to study in situ. The proteins can be extracted and purified, but their actual functions cannot be evaluated without a membrane. Therefore, isolated membrane proteins are reconstituted by integration into an artificial lipid membrane, such as a liposome. This video will introduce the principles of membrane protein reconstitution, a general reconstitution procedure, and a few applications in biochemistry.

Some membrane proteins only interact with the membrane by electrostatic or noncovalent interactions. Others, called 'integral proteins', are embedded in the lipid bilayer.

The interactions between these proteins and the membrane are so strong that even lysing the cells will not separate them. A special surfactant called a detergent is used to extract the proteins. Similar to phospholipids, detergents have hydrophilic heads and lipophilic tails, and can enter the membrane freely.

Inside the membrane, the lipophilic tails of the detergent interact with the hydrophobic protein core. This surrounds the protein with a shell of the hydrophilic detergent heads, which disrupts the protein-lipid interactions.

The protein-detergent complex is now easily separated from the membrane. The detergent makes the complex soluble in aqueous solutions, and ready for reconstitution in an artificial membrane.

Proteins are often reconstituted in the membranes of liposomes, which are artificial vesicles. To prepare liposomes, dried lipids are hydrated and agitated to induce vesicle formation. When a detergent is added, it is incorporated into the liposome membranes.

Now that we've covered the basics of protein reconstitution, let's go over a protocol for reconstituting membrane proteins in liposomes.

To begin isolating the membrane proteins, the cells are lysed. Unbroken cells are removed with centrifugation.

The supernatant is centrifuged at a higher speed to pellet the membranes. The pellet is re-suspended and a detergent is added to extract the proteins.

The remaining cell debris is removed by additional centrifugation. The protein is purified from the supernatant with column chromatography and then concentrated or purified further as needed.

To begin preparing the liposomes, a suspension of phospholipids in organic solvent is dried under nitrogen or argon.

The phospholipids are hydrated with hydration buffer, and the mixture is sonicated to finish creating the liposomes.

Detergent is added to solubilize the liposomes, which is then combined with the proteins.

The detergent is then removed by adsorption onto polystyrene beads, dialysis, or a detergent-binding column. The resulting proteoliposomes are ready to be purified and used in subsequent experiments.

You've just watched JoVE's video on reconstitution of membrane proteins. Reconstitution is a way to transfer important proteins to a cell mimic for further investigation. This video covered the principles of protein reconstitution, a reconstitution protocol, and a few applications in biochemistry. Thanks for watching! 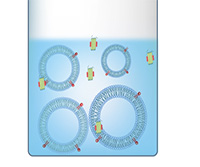