Here we present a protocol to perform intracranial pharmacological experiments followed by pain behavior assays in rodents. This protocol allows researchers to deliver molecular and cellular targets in the brain, for pharmacologic agents in the treatment of pain.

Pain is a salient sensory experience with affective and cognitive dimensions. However, central mechanisms for pain remain poorly understood, hindering the development of effective therapeutics. Intracranial pharmacology presents an important tool for understanding the molecular and cellular mechanisms of pain in the brain, as well as for novel treatments. Here we present a protocol that integrates intracranial pharmacology with pain behavior testing. Specifically, we show how to infuse analgesic drugs into a select brain region, which may be responsible for pain modulation. Furthermore, to determine the effect of the candidate drug in the central nerve system, pain assays are performed after intracranial treatment. Our results demonstrate that intracranial administration of analgesic drugs in a targeted region can provide relief of pain in rodents. Thus, our protocol successfully demonstrates that intracranial pharmacology, combined with pain behavior testing, can be a powerful tool for the study of pain mechanisms in the brain.

The central nervous system is known to play a key role in pain regulation. For example, glutamate signaling in the brain has a regulatory role in the context of pain1,2. Hence, there is a need to study cellular and molecular signaling pathways in the brain with respect to pain. In addition, there is a need to understand if molecular targets in specific brain regions can be modified to treat pain. Current studies of pain in the brain rely on in vitro studies of electrophysiology in combination with systemic (intraperitoneal) delivery of pharmacological agents. In vitro studies have obvious deficits in revealing in vivo pain mechanisms. Meanwhile, systemic drug delivery does not delineate the precise cellular targets. In vivo intracranial injections of chemical and biologic agents have become a powerful tool to study neurological and molecular pathways in the brain. In recent years, other fields have used in vivo intracranial injections to successfully study addiction and reward behaviors and circuit pathways in rodents3,4. However, in the context of pain, the use of in vivo intracranial pharmacology is lacking.

Intracranial injections allow for precise injection of a drug into a specific area of the brain. Furthermore, specific pathways and receptors can be targeted using highly selective drugs. The combination of an intracranial delivery system with precision drugs allows us to target molecular and cellular targets for pain. After intracranial delivery of these drugs, researchers can observe the immediate effects in the behavior of rodents. From well conducted experiments, rodents' behaviors can be linked with pharmacology.

In this protocol, we used the example of AMPAkine infusion in the prefrontal cortex (PFC) to demonstrate the mechanism of cortical glutamate signaling in pain regulation. AMPAkines are synthetic compounds that are known allosteric modulators. They have shown the ability to relieve acute and chronic pain in animal models5,6. Previous studies suggest that the likely sites of action of AMPAkines are in the brain5,6. The PFC is a region in the brain that exhibits top down control to subcortical areas to regulate mood and behavior. Some of these output projections have been shown to be key in pain regulation1,2,7. More specifically, glutamate signaling in the PFC has been shown to regulate pain. Thus, the PFC was chosen as a targeted brain area for the study of AMPAkines in pain states.

All procedures in this study were approved by the New York University School of Medicine Institutional Animal Care and Use Committee (IACUC) as consistent with the National Institute of Health (NIH) Guide for the Care and Use of Laboratory Animals.

As an example, we infused an AMPAkine into the PFC via cannulas (Figure 1). We also infused morphine systemically to assess the synergistic analgesic effects between AMPAkines and morphine. These results show that AMPAkines and morphine have an additive analgesic effect. It also shows that intracranial injections have the power to discover, at least in part, a mechanism for drug activation in the context of pain.

Figure 1. Intracranial injection of AMPAkines and systemic injection of morphine provide complementary analgesia. A graph comparing withdrawal latencies from Hargreaves' test after intracranial injections of either saline, AMPAkines, or AMPAkines with systemic injection of morphine. Error bars represent mean with SEM. n = 8; ****p < 0.0001, **p = 0.0099, *p = 0.0124, unpaired Student's t-test. This figure has been adapted from Sun et al. (2017)10, with permission from Elsevier. Please click here to view a larger version of this figure.

In this study, we have demonstrated that intracranial pharmacology is a powerful tool to study pain mechanisms and has potential as a therapeutic delivery system. In our protocol, we delivered AMPAkines directly into the PFC and found that by enhancing glutamate signaling in the PFC, AMPAkines provided pain relief. We were able to demonstrate this through the use of intracranial injections combined with intraperitoneal injections, with subsequent pain assays. Based on the evidence of pain-relieving effects, when AMPAkines are delivered to the PFC, the current study suggests that the PFC may be involved as a target of AMPAkines. This is an important advantage of the intracranial pharmacological approach, when combined with behavior testing. In addition, the ability to combine intracranial with systemic delivery of drugs allows us to understand the therapeutic relationship between two different drugs and the potential pharmacologic interactions. In the example shown in this study, administering an AMPAkine into the PFC in combination with morphine shows an expected additive effect, which indicates that AMPAkines and morphine operate through different molecular mechanisms.

Although in vivo pharmacology is a powerful tool to study pain, it does have limitations. First, it is possible that, in inexperienced hands, the infused drug can diffuse to neighboring brain regions. This is a particular problem with mice. This could be overcome with the use of light-activated drugs and implantation of optic fibers, by measurement of drug levels at different distances from the injection site, or by injecting the drug at close anatomical sites. Second, intracranial injections can be short lasting, but the time period of effect isn't entirely known due to the pharmacokinetics of the drug. Other techniques, such as optogenetics, allow for instantaneous activation or inactivation of a desired region of the brain; this technique is more direct and has a known period of effect. On the other hand, in vivo pharmacology can target specific receptors or signaling pathways, and thus provide an additional level of molecular specificity. Thus, in the future, it will be necessary to explore combining in vivo pharmacology with additional techniques, such as in vivo physiology and optogenetics. With the combination of these tools, new pathways and receptor specific pathways can be discovered and used to treat pain. 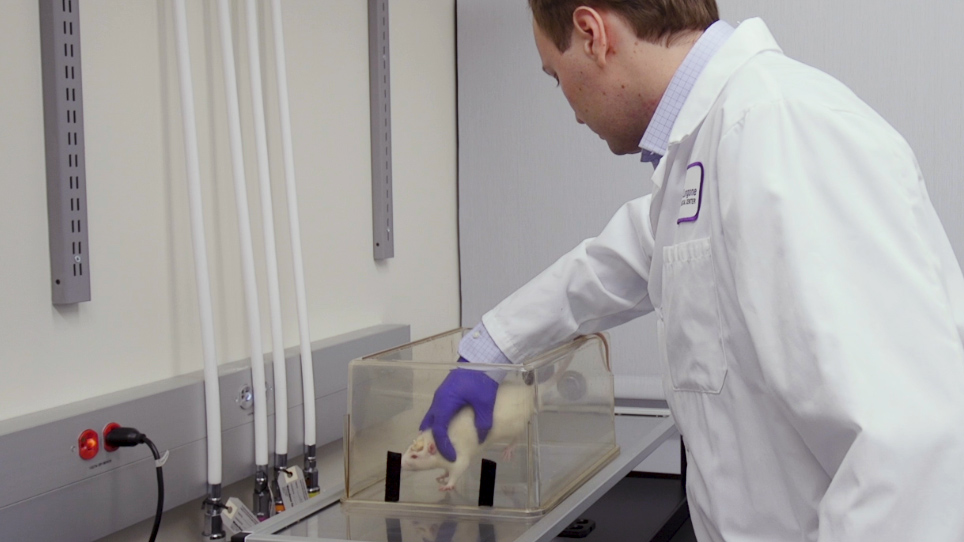