This protocol enables visualization of gene expression in embryonic Astyanax cavefish. This approach has been developed with the goal of maximizing gene expression signal, while minimizing non-specific background staining.

In recent years, a draft genome for the blind Mexican cavefish (Astyanax mexicanus) has been released, revealing the sequence identities for thousands of genes. Prior research into this emerging model system capitalized on comprehensive genome-wide investigations that have identified numerous quantitative trait loci (QTL) associated with various cave-associated phenotypes. However, the ability to connect genes of interest to the heritable basis for phenotypic change remains a significant challenge. One technique that can facilitate deeper understanding of the role of development in troglomorphic evolution is whole-mount in situ hybridization. This technique can be implemented to directly compare gene expression between cave- and surface-dwelling forms, nominate candidate genes underlying established QTL, identify genes of interest from next-generation sequencing studies, or develop other discovery-based approaches. In this report, we present a simple protocol, supported by a flexible checklist, that can be widely adapted for use well beyond the presented study system. It is hoped that this protocol can serve as a broad resource for the Astyanax community and beyond.

In situ hybridization is a common method for staining fixed tissues to visualize gene expression patterns1. This technique has been performed for years in other traditional2 and non-traditional3 model systems, for a variety of biological studies. However, several steps and reagents are necessary to successfully perform this procedure. For investigators who have never performed this technique, initiating the process can be intimidating owing to the many steps involved. Further, the lengthy nature of this procedure lends itself to technical errors, which can be challenging to troubleshoot.

The overall goal of this article is to present a simple and straightforward method that will render this hybridization technique accessible to a wide audience. To reduce the introduction of errors, we present a straightforward approach that yields high quality gene expression staining and minimizes non-specific background signal. This procedure is similar to other approaches developed in traditional model systems, such as Danio rerio4. Here, we aim to facilitate careful implementation of each step using a downloadable checklist (Supplemental File 1), to promote careful implementation of the protocol. The rationale for doing this is to facilitate organization through the many steps involved in this procedure. This article is appropriate for researchers interested in performing whole-mount in situ hybridization in developing embryos, but have not yet performed the procedure. The advantage of the chosen approach for Astyanax researchers is that it has been tested and proven in both cavefish and surface fish morphs, thereby facilitating comparative expression analyses. The presented method can be used by researchers in studies on Astyanax and other systems.

All methods described here have been approved by the Institutional Animal Care and Use Committee (IACUC) of the University of Cincinnati (Protocol #10-01-21-01).

In this report, we provide a simple and straightforward approach to perform labeling of embryonic Astyanax specimens for high-quality gene expression analysis. This technique can be carried out in either four or five days, and each principal step in the procedure is represented in a color-coded flowchart (Figure 1). Once completed, stained embryos should harbor a dark purple chromatic label in tissues expressing the particular gene of interest. We have successfully implemented this protocol in both Pachón cavefish (Figure 2A-B,E) and surface fish (Figure 2C-D,F) embryos.

The cavefish embryos were stained for two transcription factors that label early neural crest tissues, Sox9 and Tfap2a5,6. Embryos labeled for Sox9 expression demonstrate clear labeling in the developing branchial arches and pectoral fin (yellow arrowheads, Figure 2A). Note that staining is virtually absent in the yolk sac or the developing somites on the flank (Figure 2A). Similarly, Tfap2a expression is evident in the portions of the developing head, as well as early migration neural crest cells (Figure 2B, arrowhead) along the dorsal flank region of the embryo. The third representative gene presented for cavefish embryos is Phf20a, a marker of osteoblast differentiation7. Note the positive staining in the portions of the somitic mesoderm and posterior head that are destined to give rise to bony tissue (Figure 2E, arrowheads).

In surface fish embryos, we probed for the genes CXCR, Adcyap1a, and Sox10. CXCR encodes a G-protein membrane-bound receptor that binds CXC chemokines8. Positive labeling is present in isolated regions of the head and flank (Figure 2F, arrowheads), as well as a few individual cells overlying the yolk sac. The gene adenylate cyclase-activating polypeptide, Adcyap1a, is expressed in regions of the central nervous system, including pituitary cells. Note the highly specific expression in paired, bilateral clusters of cells on the dorsal aspect of the embryo; as well as a larger region of midline expression (Figure 2C, arrowheads). Finally, we present the expression of Sox10, a transcription factor which labels early neural crest and oligodendrocyte cells10. Highly specific positive staining is evident as an early marker of neural crest on the left and right sides of the dorsal embryo (Figure 2D, arrowheads).

We present each of the two types of confounding issues other investigators may encounter. The first issue one periodically encounters is punctate specks of non-specific labeling. These specks may arise as precipitate from the final MABT rinses, or the AP buffer during the coloration reactions. An example of this non-specific labeling is evident on the yolk sac of a surface fish embryo stained for expression of Pnp4a. This gene encodes an enzyme (purine nucleoside phosphorylase) that facilitates production of iridescent pigmentation11. This gene is first evident in the developing eye and the swim bladder. The punctate specks observed in some surface specimens (Figure 3A), were eliminated by frequent washes and replacement of the AP Buffer + NBT/BCIP in the final stages of the protocol (Figure 3B). A second issue that one periodically encounters is the diffuse, largely non-specific expression of genes that would otherwise produce a distinct expression pattern. One example is the gene BMP4, which appears as a largely diffuse pattern with low levels of chromogen present throughout the specimen (Figure 3C). In cases such as these, we generally identify a different region of the gene, amplify into a vector and perform a new probe synthesis (see Supplemental File 6). The example of a control (no probe) specimen (Figure 3D) is provided to illustrate the diffuse and non-specific nature of our failed BMP4 probe. 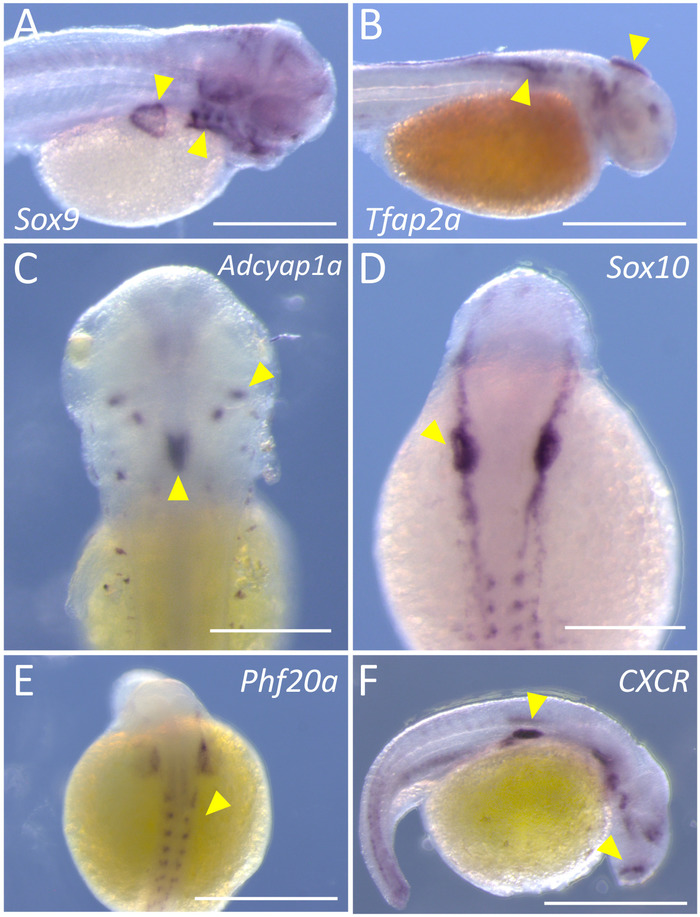 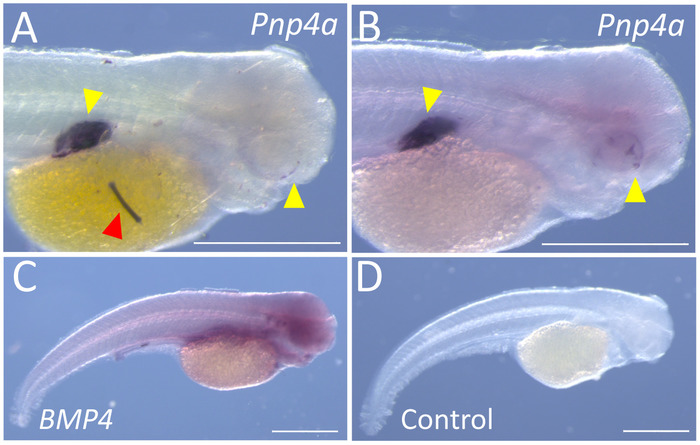 Owing to the vulnerability of RNA to degradation, one of the most critical steps in the protocol concerns the sterile synthesis of the RNA probe. However, if a probe is carefully generated, and provides good results, it can be reused in subsequent staining reactions. A second crucial step is the careful production of all reagents used throughout the protocol. Since this protocol involves several days and many small steps, it is essential that all reagents are accurately produced, and stored in a sterile manner. Further, it is fundamentally important that the investigator keeps careful track of each step in the protocol. We have found that the provided checklist of steps can be extremely useful in ensuring accurate and precise completion of each aspect of this protocol.

We do not often modify the protocol we presented here. However, investigators may perform probe incubations at different temperatures than the ones suggested (i.e., 70 °C). Slight changes in hybridization temperatures will impact binding of RNA probes, and therefore, seeking the optimal hybridization temperature can positively impact the quality of staining. With respect to troubleshooting, we strongly encourage other investigators to utilize the checklist provided with this article (Supplemental File 1). Maintaining careful records is a necessary first step in ensuring high quality staining. A second minor modification is suggested is to perform the final coloration reaction without rocking (e.g., without placing on a platform shaker or nutator). The reason for this is that periodically we note the production of precipitate, that presumably arises from the AP buffer solution. This precipitate usually overstains to a dark color and creates punctate (non-specific) background on the stained tissue. To minimize the production of this precipitate, we prepare sterilized AP buffer just prior to each reaction. Further, once NBT and BCIP have been added to the buffer, we replace it with fresh buffer and NBT/BCIP every hour until the coloration reaction is completed.

A limitation to the presented method is that a chromatic stain was used for gene expression visualization. We prefer this approach since it is cost-effective, and only requires light microscopy to visualize. If one were interested in evaluating quantitative differences, we suggest they use a fluorescent coloration reaction. This will enable semi-quantitation, for example, through comparison of relative fluorescent units of expression between experiments.

Protocols for in situ hybridization are available widely on the web12,13, as well as in scientific publications. The protocol that we present was developed specifically for our model system, Astyanax mexicanus. We have used this protocol to stain the expression of several dozens of genes, and feel it consistently provides high-quality results. A significant advantage of this protocol is the step-by-step checklist of items to enable the investigator to perform multiple tasks while ensuring accurate completion of each of the steps of this protocol. We hope that this protocol will serve as a helpful resource to other investigators in the field and beyond, and anticipate that this common laboratory technique will support future discoveries linking genotype to phenotype in the blind Mexican cavefish.

The authors wish to thank members of the Gross lab for helpful comments on this manuscript. We wish to acknowledge four high school students who utilized this protocol during summer internships in 2017 and 2018, including Christine Cao, Michael Warden, Aki Li, and David Nwankwo. HL was supported by a UC Biology STEM Fellowship during the summer of 2017. This work was supported by grants from the National Science Foundation (DEB-1457630 to JBG), and the National Institutes of Dental and Craniofacial Research (NIH; DE025033 to JBG). 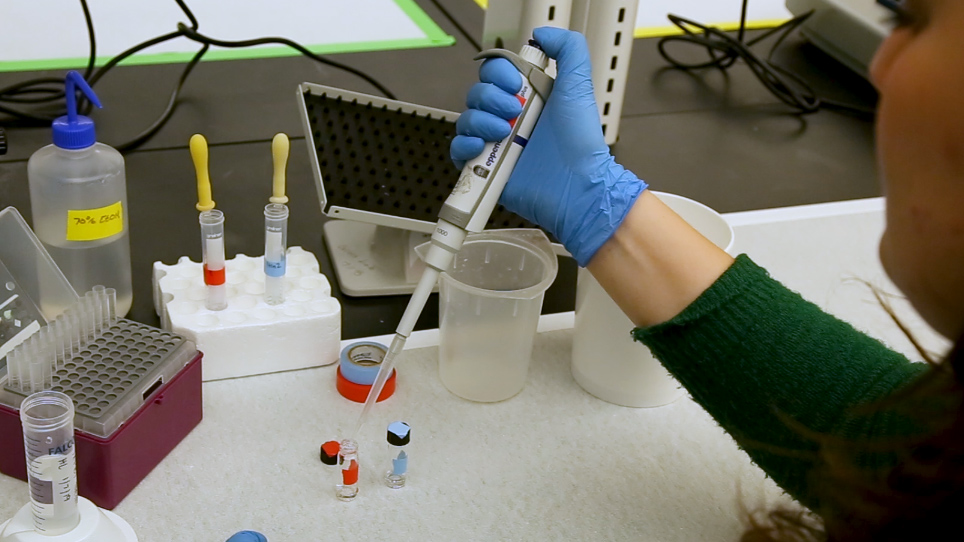