This protocol demonstrates the use of compartmentalized microfluidic chips, injection molded in a cyclic olefin copolymer to cultured neurons differentiated from human stem cells. These chips are preassembled and easier-to-use than traditional compartmentalized poly(dimethylsiloxane) devices. Multiple common experimental paradigms are described here, including viral labeling, fluidic isolation, axotomy, and immunostaining.

Use of microfluidic devices to compartmentalize cultured neurons has become a standard method in neuroscience. This protocol shows how to use a pre-assembled multi-compartment chip made in a cyclic olefin copolymer (COC) to compartmentalize neurons differentiated from human stem cells. The footprint of these COC chips are the same as a standard microscope slide and are equally compatible with high resolution microscopy. Neurons are differentiated from human neural stem cells (NSCs) into glutamatergic neurons within the chip and maintained for 5 weeks, allowing sufficient time for these neurons to develop synapses and dendritic spines. Further, we demonstrate multiple common experimental procedures using these multi-compartment chips, including viral labeling, establishing microenvironments, axotomy, and immunocytochemistry.

Human stem cell differentiated neurons (hSC-neurons) are increasingly used for biological research. These neurons, which can be derived from human source material, are of great interest for translational research, including the study of traumatic brain injuries and neurodegenerative disorders such as Alzheimer’s disease. Thus, tools to improve and facilitate the study of hSC-neurons are in demand.

To study the unique polarized morphology of neurons, many researchers use multi-compartmentalized microfluidic devices1,2,3,4,5,6,7,8,9,10,11. These devices enable measurements and manipulations of long projection neurons with unique subcellular access. Multi-compartmentalized microfluidic devices consist of two parallel microfluidic compartments separated by microgrooves, which guide axonal growth. Neurons or neural stem cells (NSCs) are plated in the somatodendritic compartment, and then adhere to the bottom of the compartment surface after minutes. Differentiated neurons grow and extend their axons/projections through the microgroove region into an adjacent and isolated axonal compartment. In the past, these devices were exclusively made using poly (dimethylsiloxane) (PDMS) replica molding. PDMS devices have many drawbacks previously described12, including persistent hydrophobicity and the need to assemble to a glass coverslip immediately prior to use. Pre-assembled injection molded chips overcome many of these drawbacks and are sold commercially (see Table of Materials)12. The compartments of these chips are permanently made hydrophilic and the entire chip is injection molded in optically transparent cyclic olefin copolymer (COC).

NOTE: Figure 1A,B shows a schematic of the pre-assembled COC chip, including the locations of the main channels or compartments, wells, and microgrooves. The compartmentalized chip can establish distinct fluidic microenvironments within a compartment as demonstrate by the isolation of food coloring dye (Figure 1C). The protocol for preparing the pre-assembled multi-compartment chip is given in Nagendran et al., Section 112.

1. Coating of multi-compartment chips for hSC-neurons

NOTE: Figure 2A shows an overview of the coating procedures.

2. Seeding NSCs into the multicompartment chip

NOTE: This protocol used commercially purchased NSCs, unlike our previous publication which began with human embryonic stems cells5. In this protocol neural stem cells are plated directly into the plastic chips where they differentiate into neurons. The cells can be allowed to proliferate as NSCs (without differentiation) for up to 2 passages and stored in vials in liquid N2 for further use. This protocol uses NSC vials stored in liquid N2 after passage 1 or 2. Figure 2B shows an overview of the coating procedures.

3. Viral fluorescent labeling of hSC-neurons within the chip

NOTE: Multiple virus can be used to label neurons within the chip. Instructions below describe the use of G-deleted Rabies-mCherry or –eGFP virus. Potentially infectious materials must be handled according to applicable rules and regulations, and may require additional training and institutional approval.

4. Fluidic isolation, axotomy, and immunostaining within the chip

After one week (7-10 days) in the chip with differentiation media, NSCs differentiate into neurons and neuronal projections enter the axonal compartment (Figure 3). Within the chip, neurons attach and distribute evenly within the somatic compartment. In comparison, neurons in PDMS devices clump/aggregate as early as 5 days post addition of differentiation media, leading to compromised cell health as can be seen in the Figure 3B (day 13 magnified image). Neurons in the chips look healthy with bundled axons. Healthy neurons can be maintained within the chips for 4-5 weeks.

The multi-compartment chip is also compatible with immunocytochemistry to visualize the cellular localization of protein. After 26 days of maintaining neurons in differentiation media, neurons were labeled for the excitatory synaptic marker, vGlut1 (Figure 5). These results show that virally labeled neurons co-localize with vGlut1 (Figure 5E) and neuron specific marker, β-tubulin III (Figure 5F-H). 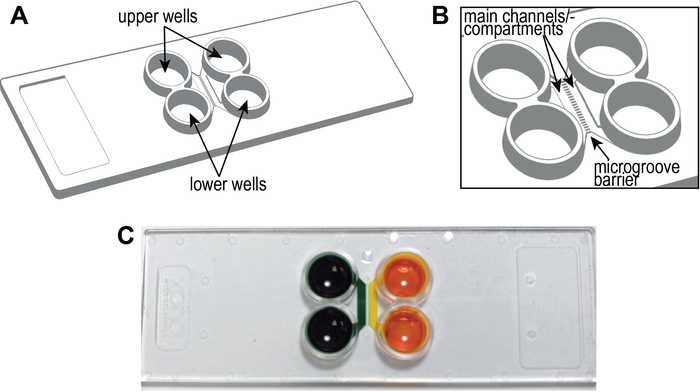 Figure 1: The pre-assembled COC, multicompartment microfluidic chip. (A) A drawing of the chip identifying the upper and lower wells. The size of the chip is 75 mm x 25 mm, the size of standard microscope slides. (B) A zoomed in region showing the channels and microgrooves separating the channels. Additional details are provided in Nagendran et al.12. (C) This photograph illustrates the creation of isolated microenvironments within each compartment using food coloring dye. This entire figure has been reproduced from 12. Please click here to view a larger version of this figure. 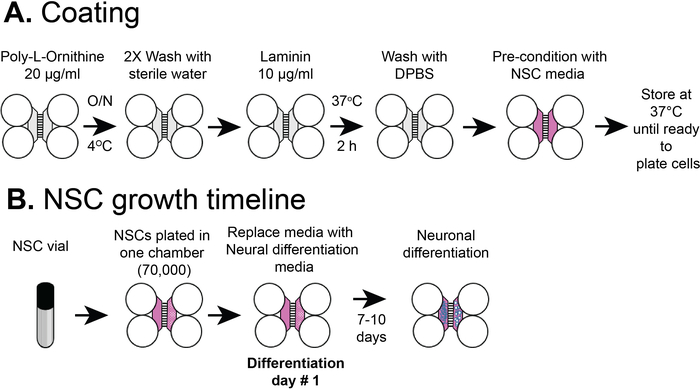 Figure 2: Plastic compartmentalized chip coating and NSC cell plating timeline. (A) Plastic multicompartment chips were coated with a pre-coating solution, and then poly-L-ornithine and laminin before pre-conditioning with NSC media. (B) NSCs were plated with 7 x 104 cells in the somatic compartment of the chip. The cells were grown in NSC media for 24 h and then the media was replaced with neural differentiation media. Differentiated neurons were observed by 7-10 days post differentiation. Please click here to view a larger version of this figure. 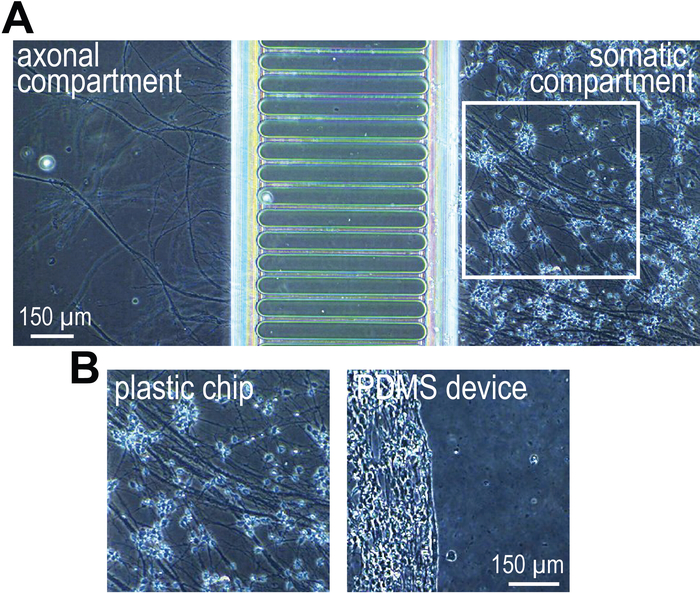 Figure 3: hSC-neuron growth comparison in chips and PDMS devices. (A) A phase contrast image of hSC-neurons grown at 13 days after differentiation in the plastic multicompartment chip. (B) A zoomed in region of hSC-neurons cultured within the white box in (A) and an equivalent region within a PDMS device (right). hSC-neurons within the chips attach well. Aggregated neuron clusters form in PDMS-based devices. Representative of 2 independent experiments. Please click here to view a larger version of this figure. 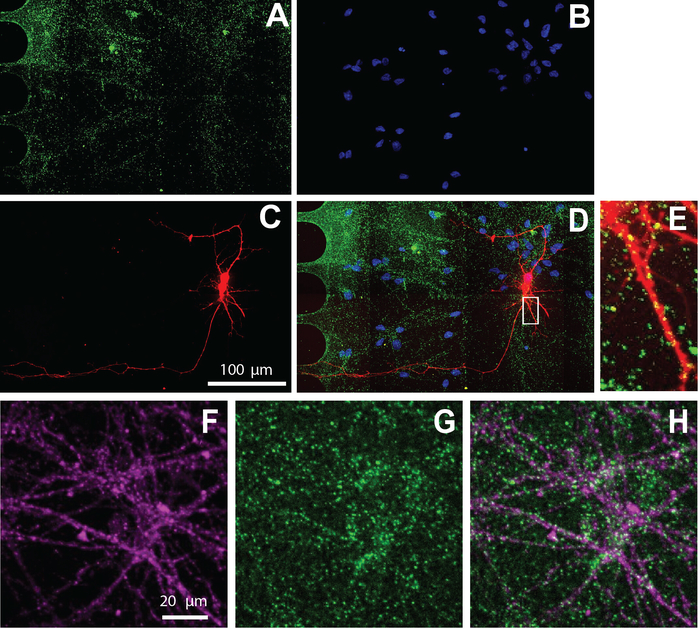 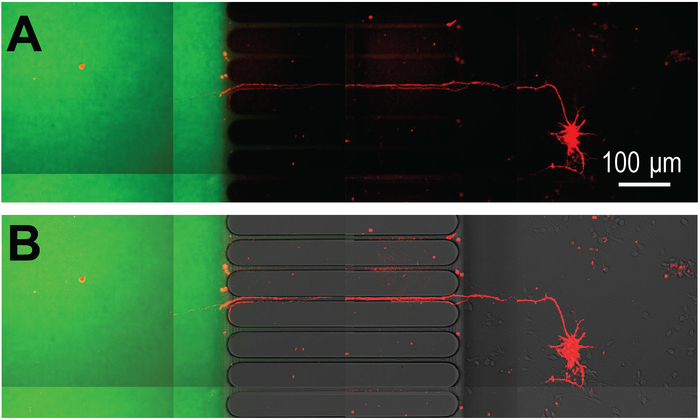 Figure 6: Virally transduced mCherry neurons extend projections into an axon localized microenvironment established within the preassembled COC chip. (A) mCherry labeled neuron extend axons through the microgrooves of the chip and into an isolated axon compartment. Isolation of the axon compartment is visualized using Alexa Fluor 488 hydrazide. Imaging of neurons occurred at differentiation day 26 and 3 days after infection with the modified rabies virus. (B) The fluorescence image in (A) is merged with a DIC image. Note the location of the microgrooves. Please click here to view a larger version of this figure. 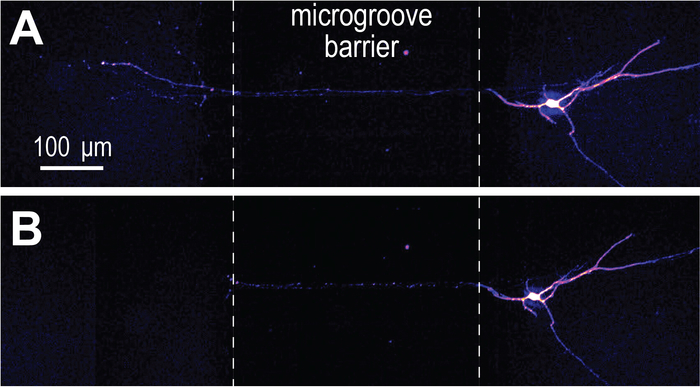 Figure 7: Axotomy performed within the COC multicompartment chip. (A) mCherry labeled neurons at differentiation day 33 were imaged before axotomy. ‘Fire’ color look-up table. (B) Immediately after axotomy, showing that axons are completely severed. Please click here to view a larger version of this figure.

The preassembled multi-compartment COC chip is an easy-to-use compartmentalized platform to differentiate and maintain human NSCs into neurons for long-term (>4 weeks). In this protocol, we demonstrate the differentiation of human NSCs into glutamatergic neurons, retrograde label neurons, perform immunocytochemistry, visualize dendritic spine morphology and perform axotomy. These chips are compatible with high resolution imaging and there is no autofluorescence with the COC12.

COC multi-compartment chips are functionally equivalent to silicone-based compartmentalized devices, and have benefits and drawbacks as described previously12. Table 1 compares multi-compartment COC chips and silicone devices for culturing hSC-neurons. The COC compartmentalized chips provide a better hydrophilic surface for attachment and maintenance of stem cells over a long culture period. PDMS-based devices need to be assembled and attached to glass coverslips. The hydrophobic nature of the PDMS devices causes aggregation of stem cells5; this leads to both challenges in imaging at the cellular level and greater susceptibility to physical damage due the movement of cell aggregates during media changes. The plastic chip overcomes these challenges. COC is gas impermeable, unlike PDMS, so air pockets trapped or formed within the channels must be removed by the user. The pre-coating solution reduces the possibility for air to become trapped in the channels. This solution consists of ethanol and other agents. A previously published protocol for culturing murine neurons within these plastic chips provides additional details about pipetting cells and media within the chips12. NSCs are more fragile that murine neurons, so must be handled more gently. It is also critical to mix the stem cells thoroughly before plating by gently pipetting them up and down.

Use of neurons derived from in vitro differentiated human stem cells is becoming increasingly popular in medicine and research. These neurons are important for research and clinical applications for many CNS disorders, including neurodegenerative diseases and traumatic brain injuries. These neurons closely resemble human fetal neurons15. In the future, appropriately aged neurons could be generated from stem cells to mimic age-related neuronal function and used in conjunction with these compartmentalized devices. These devices will facilitate research in diseases affecting axon health and function such as axon deficits in neurons of patients diagnosed with autism spectrum disorders and axonal regeneration after injury16,17. 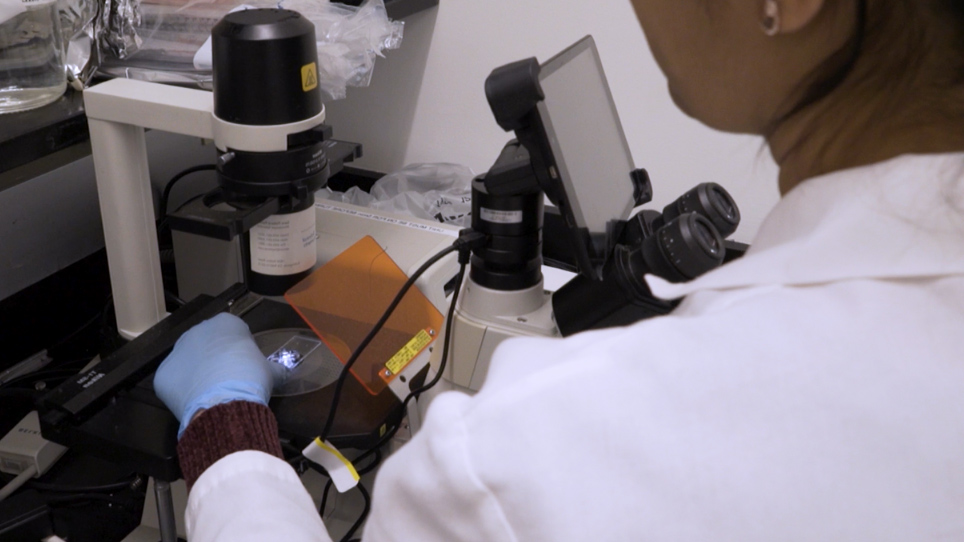