The purpose of the protocol is to indirectly evaluate the direction of the finger force during manipulation of a handheld object based on the biomechanical relationships in which deviated force direction causes center of pressure (COP) replacement. To evaluate this, a thin, flexible, and high spatial resolution pressure sensor sheet is used. The system allows measurement of the COP trajectory in addition to the force amplitude and its temporal regulation. A series of experiments found that increased trajectory length reflected a sensorimotor deficit in stroke patients, and that decreased COP trajectory reflects a compensatory strategy to avoid an object slipping from the hand grip in the elderly. Moreover, the COP trajectory could also be decreased by dual task interference. This article describes the experimental procedure and discusses how finger COP contributes to an understanding of the physiology and pathophysiology of grasping.

Force control is the fundamental basis of precision grip. Compared with power grip, precision grip evaluates the minimal force output reflecting the ability to manipulate an object. Multiple sensorimotor systems contribute to precision grip. For example, during a grip and lift task, visual information enables the perception of the object’s size and shape. After the fingertips touch the object, tactile signals are delivered to the somatosensory cortex to adjust the precision grip force. Grip force (GF) is generated when the fingertips make contact with the object, and it increases during the lifting phase1. When an object approaches the goal height in the air, healthy young adults produce the minimal GF to optimize cutaneous input from the finger pulps and conserve energy. On the other hand, older adults use a large grip force to avoid letting the object slip from their grip2. In stroke patients, onset of grip force is delayed and the ability to adjust the safety margin is impaired due to sensory and motor deficits. Exaggerated grip force is considered to be a strategic response to compensate for sensory and motor deficits3.

The standard protocol to measure GF control in precision grip was suggested by Johansson and Westling in the 1980s4. They developed a device to monitor both load and grip forces simultaneously. Since then, GF amplitude and its temporal regulation have been used as typical kinetic parameters in numerous studies on precision grip. Another kinetic parameter is the force direction5. The force direction results from a combination of grip and lift forces. In order to maintain stable precision grip, properly directed grip and lift forces must be generated between the thumb and index finger, and the deviated force direction can cause spatial instability. Although various load cell-type force direction instruments are used in grasping studies, these instruments have a limitation in terms of monitoring the grip force control in manipulating objects of different sizes and shapes used in daily living. Thus, a flexible and attachable sensor is essential to investigate the relationships between grip force control and daily functions.

The purpose of this protocol is to indirectly evaluate the finger force direction during manipulation of an object based on the biomechanical relationship in which deviated force direction causes Center of Pressure (COP) replacement. The COP is the center of all the forces, and represents how the forces are balanced on the sensor sheet. The use of COP to evaluate grip force control was first suggested by Augurelle et al.6. They monitored COP displacement to investigate the role of cutaneous feedback and found that deviated COP occurred after digital anesthesia. However, COP displacement was monitored only vertically in their study; therefore, the COP displacement in a three-dimensional space has not been adequately evaluated. To solve this limitation a thin, flexible, and high spatial resolution pressure sensor sheet was used to measure COP. Relatively high spatial resolution sensors (~60–100 points per cm2) to measure grip force control have been used7,8, but recent advances in spatial resolution (248 points per cm2) allow measurement of the COP trajectory as a parameter to quantify spatial stability. This paper describes the experimental procedure and discusses how finger COP contributes to the understanding of the physiology and pathophysiology of grasping.

The series of studies in the present paper were approved by Gunma University Ethical Review Board for Medical Research Involving Human Subjects.

Several studies have introduced experimental protocols and two kinetic parameters (the COP trajectory and the GF) to measure finger force during manipulation of an object. In previous studies, it was found that the COP trajectory increased in stroke patients9. In cervical myelopathy patients, the GF correlated with the cutaneous pressure threshold and upper extremity function10. In healthy young subjects, the GF increased with cognitive interference11. Similar exaggerated GF was found in contralateral hand movement interference. Figure 3 shows the COP trajectories and the GF traces of the dominant index finger in single and dual tasks for representative young and elderly adults. The GF increased in the contralateral hand movement interference. In contrast, the COP trajectories tended to decrease (unpublished data).

Kurihara et al.9 investigated the grip force coordination of grasping in stroke patients. They found that the COP trajectory increased in the paretic hand, although the GFs were not significantly different from the nonparetic hand. Hemorrhagic patients showed longer COP trajectories of the thumb and index finger compared to those in ischemic patients. They also found that the kinetic parameters were correlated with not only somatosensory function, but also cognitive function.

In cervical myelopathy patients, Noguchi et al.10 evaluated the kinetic characteristics of individual finger grip force and investigated the relationship between the grip force and upper extremity function. They found that the GF was associated with the severity of hand dysfunction. Although there was no significant correlation in pinch power or grip power, there was a positive correlation between the GF and the cutaneous pressure threshold.

Lee et al.11 investigated dual task interference in a grip and lift task. They reported that the GF increased in both hands mainly due the dual cognitive task. They also found a correlation between the perceived difficulty and maximum grip force in the dominant hand. 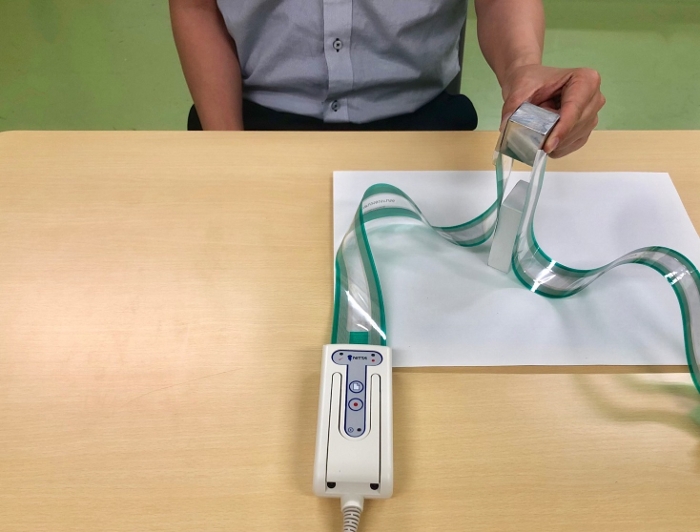 Figure 1: Grip and lift task. Participants gripped the cube using the thumb and index finger, lifted it approximately 5 cm, and held it for 5−7 s. Please click here to view a larger version of this figure. 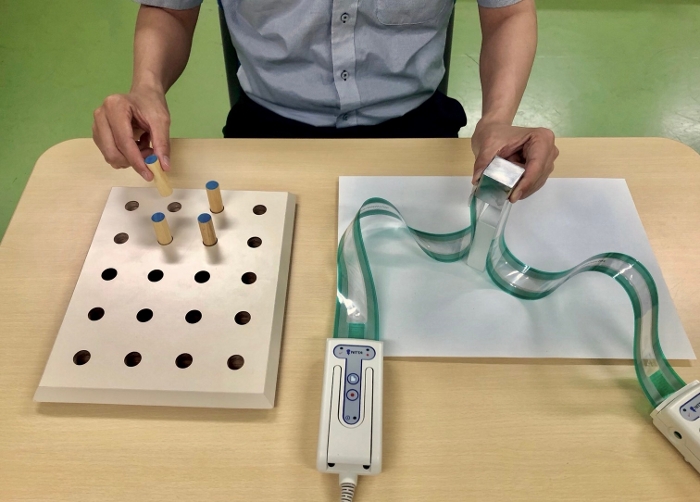 Figure 2: Dual task interference with contralateral hand movement. Participants performed a grip and lift task with one hand and simultaneously conducted a peg test with the other. Please click here to view a larger version of this figure. 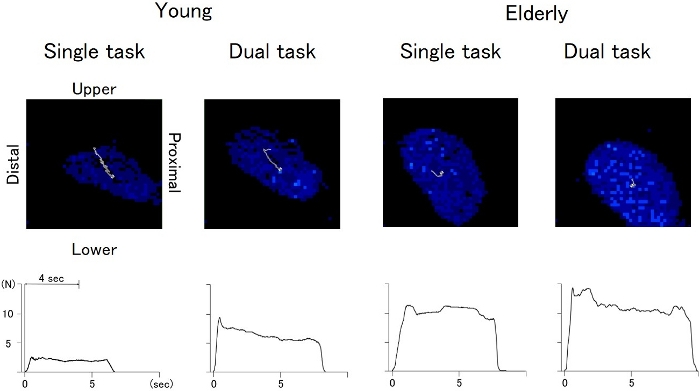 Figure 3: COP trajectories and the GF traces of the dominant index finger in single and dual tasks for representative young and elderly adults. Please click here to view a larger version of this figure.

This experimental procedure provides evidence that a flexible pressure sensor sheet could be useful for evaluating spatial stability during precision grip. Altered grip force direction represents grasping spatial instability such as a finger slip. However, existing load cell-type force direction instruments have a limitation in terms of ensuring a natural reach-to-grip movement. To resolve this technical problem, the COP trajectory of the area between the finger pulps and contact surface based on a biomechanical relationship was monitored. The results suggest that the COP displacement is caused by deviated force direction. Thus, the study found that the COP trajectory length is a useful kinetic parameter for evaluating the spatial stability in a precision grip.

A critical factor influencing the outcome of the experiment was each participant’s understanding of the experimental protocol. If participants did not understand the aim of the experiment, they tended to use a relatively large GF in order to avoid spatial instability. Intentionally exaggerated GF interferes with the evaluation of precision grip. Another factor influencing the outcome can be the area between the fingertip and contact surface of the object. If the fingertip is not properly in contact with the surface of the object, the COP is not estimated appropriately. During practical trials, the examiner must adjust the location and orientation of the cube. When the cube is not placed properly, the fingertip protrudes from the edge of the cube, or participants tend to increase trunk and shoulder movements to compensate for hand orientation for grasping.

One limitation of the protocol is the unclear biomechanics of the COP. A slip, roll, or twist between the finger pulps and contact area can account for COP displacement, resulting in spatial instability. This is because the COP is calculated in the X- and Y- axes. Moreover, it is technically difficult to link the two COPs of the thumb and index fingers. Although there are limitations, it is clear that there are benefits to evaluating the spatial stability of grasping using the COP trajectory.