This protocol demonstrates how to use the Auto-CHO software for hierarchical and programmable one-pot synthesis of oligosaccharides. It also describes the general procedure for RRV determination experiments and one-pot glycosylation of SSEA-4.

To tackle this problem, Wong et al. developed the first automated method for the synthesis of oligosaccharides using a programmable software program called Optimer4, which guides the selection of BBLs from a library of ~50 BBLs for sequential one-pot reactions. Each BBL was designed and synthesized with well-defined reactivity tuned by various protecting groups. Using this approach, the complexities of protecting manipulation and intermediate purification can be minimized during synthesis, which have been considered the most difficult issues to overcome in the development of automated synthesis. Despite this advance, the method is still quite restricted, as the number of BBLs is too small and the Optimer program can only handle certain small oligosaccharides. For more complex oligosaccharides that require more BBLs and multiple passes of one-pot reactions and fragment condensation, an upgraded version of the software program, Auto-CHO5, has been developed.

In Auto-CHO, more than 50,000 BBLs with defined reactivity to the BBL library have been added, including 154 synthetic and 50,000 virtual ones. These BBLs were designed by machine learning based on basic properties, calculated NMR chemical shifts6, 7, and molecular descriptors8, which affect the structure and reactivity of the BBLs. With this upgraded program and new set of BBLs available, the synthesis capacity is expanded, and as demonstrated, several oligosaccharides of interest can rapidly be prepared. It is believed that this new development will facilitate the synthesis of oligosaccharides for the study of their roles in various biological processes and their impacts on the structures and functions of glycoproteins and glycolipids. It is also thought that this work will benefit the glycoscience community significantly, given that this method is available to the research community free of charge. Synthesis of the essential human embryonic stem cell marker, SSEA-45, is demonstrated in this work.

The Auto-CHO search result based on default parameter settings indicates SSEA-4 can be synthesized by a [2 + 1 + 3] one-pot reaction. Figure 3 shows the software screenshot of the SSEA-4 search result. When a trisaccharide reducing end acceptor is selected (Figure 3, label 1), the program shows four potential solutions for the query. The first solution has one fragment (Figure 3, label 2), and its calculated yield is about 94%. The fragment can be synthesized by two BBLs (Figure 3, label 3). The RRV of the first disaccharide BBL is 1462 and the RRV of the second monosaccharide is 32.0. Label 4 of Figure 3 shows the chemical structure of the first suggested BBL used in the one-pot reaction. The one-pot experiment shows that SSEA-4 can be synthesized in 43% yield by this suggestion successfully (Figure 4) and it has also been demonstrated in previous work5. The detail experimental procedures and the characterization of mentioned compounds, particularly SSEA-4 can be found in the cited reference5. 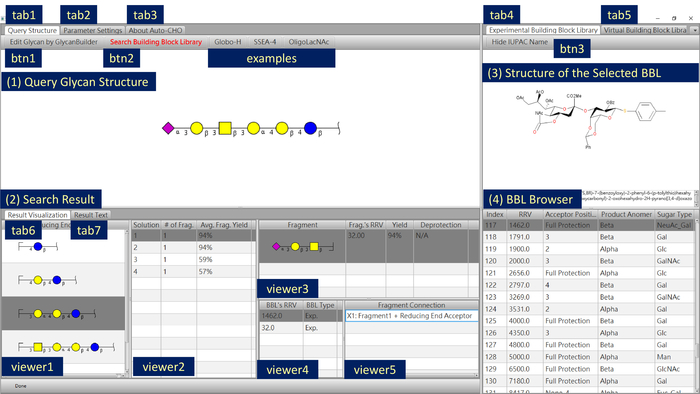 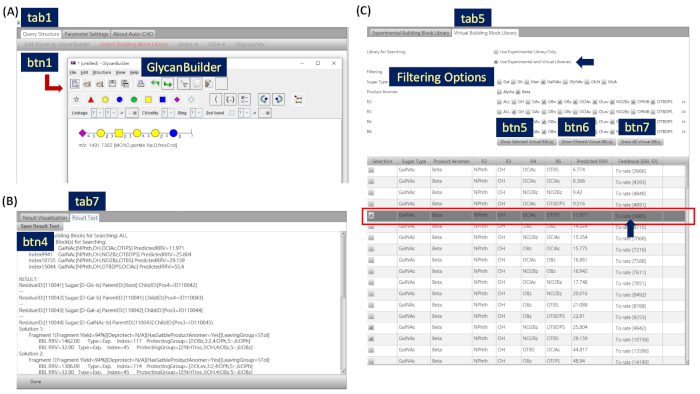 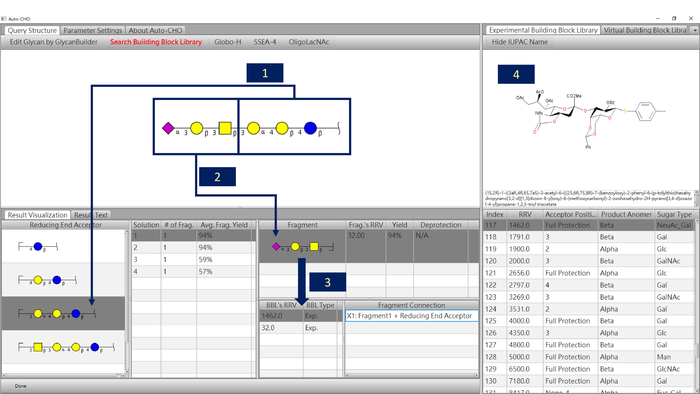 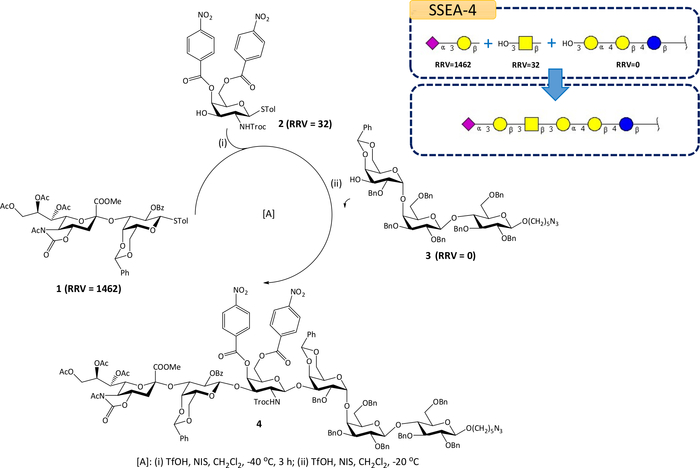 Figure 4: The [2 + 1 + 3] one-pot synthetic strategy for SSEA-4. SSEA-4 can be synthesized by three units suggested by Auto-CHO: sialyl disaccharide building block 1 (RRV=1,462), monosaccharide building block 2 (RRV=32.0), and reducing end acceptor 3 (RRV=0). This figure was modified from our previous publication5 with permission (under a Creative Commons Attribution 4.0 International License: http://creativecommons.org/licenses/by/4.0/). Please click here to view a larger version of this figure.

The Auto-CHO software was developed for assisting chemists to proceed hierarchical and programmable one-pot synthesis of oligosaccharides5. Auto-CHO was built by Java programming language. It is a GUI software and cross-platform, which currently supports Windows, macOS, and Ubuntu. The software can be downloaded free of charge for the Auto-CHO website at <https://sites.google.com/view/auto-cho/home>, and its source code with MIT license can be accessed from the GitHub at <https://github.com/CW-Wayne/Auto-CHO>.

The BBL library of Auto-CHO contains 154 experimental BBLs and more than 50,000 virtual BBLs with accurately predicted RRVs. Currently, the sugar types of virtual BBLs include Gal, Glc, Man, GalNAc, GlcNAc, GlcN, and GlcA. All library searches are processed in the local machine and we do not collect any query structure from users. Since Auto-CHO cannot guarantee the success of high-yield synthesis among virtual BBLs given by the program (due to many structural constraints or unknown factors in the chemical reactions), Auto-CHO provides online feedback questionnaire for virtual BBLs. It is believed that user feedback from the research community can help keep valuable virtual BBLs and eliminate unsuitable ones. An email address is provided for technical assistance in the software user guide. Users can contact this address if they encounter technical questions or problems.

Two search strategies are provided here. For parameter settings (section 1.4), it is suggested to set parameters with stricter criteria at the beginning. If Auto-CHO does not return satisfied synthetic solutions, it is advised to use more flexible parameters in the next search run. For the selection of BBL library (section 1.5), it is suggested to search the experimental library only at first. If the software does not return any suitable solution, it is advised to search experimental and virtual libraries in the following iterations.

In summary, this protocol demonstrates the operation of Auto-CHO software and use of Auto-CHO for one-pot synthesis of the SSEA-4 molecule. In addition, the programmable one-pot protocol is described. Auto-CHO is the GUI and open-source software with library includes validated and virtual BBLs, and it supports hierarchical one-pot synthesis of oligosaccharides. It is believed that this software can benefit the research community and more essential oligosaccharides can be synthesized by one-pot reactions through Auto-CHO for further research. 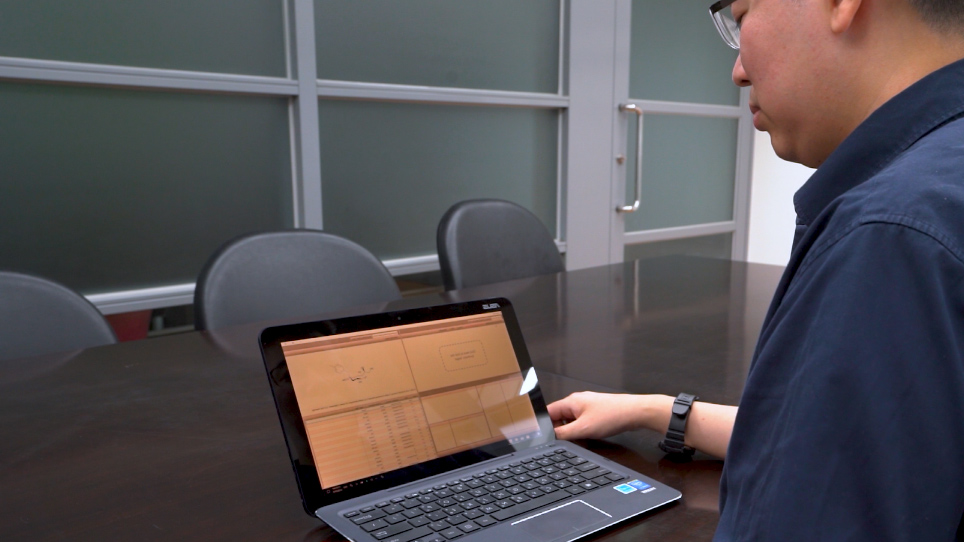