As obligate anaerobic organisms are unable to grow upon oxygen exposure, the use of anaerobic culturing techniques is indispensable. Here, we demonstrate a simple and effective method to cultivate a mixed culture derived from a biogas plant from media preparation to gas and volatile fatty acid quantification.

In contrast to aerobic organisms, strictly anaerobic microorganisms require the absence of oxygen and usually a low redox potential to initiate growth. As oxygen is ubiquitous in air, retaining O2-free conditions during all steps of cultivation is challenging but a prerequisite for anaerobic culturing. The protocol presented here demonstrates the successful cultivation of an anaerobic mixed culture derived from a biogas plant using a simple and inexpensive method. A precise description of the entire anoxic culturing process is given including media preparation, filling of cultivation flasks, supplementation with redox indicator and reducing agents to provide low redox potentials as well as exchanging the headspace to keep media free from oxygen. Furthermore, a detailed overview of aseptically inoculating gas tight serum flasks (by using sterile syringes and needles) and suitable incubation conditions is provided. The present protocol further deals with gas and liquid sampling for subsequent analyses regarding gas composition and volatile fatty acid concentrations using gas chromatography (GC) and high performance liquid chromatography (HPLC), respectively, and the calculation of biogas and methane yield considering the ideal gas law.

On earth molecular oxygen in notable concentrations is available in areas having direct contact with the atmosphere or in the presence of oxygenic phototrophs. Environments in which oxygen is absent are called anaerobic. However, energy conversion is still possible under anaerobic conditions via two different metabolic processes, fermentation and anaerobic respiration1.

While organisms undergoing aerobic respiration are using oxygen as a terminal electron acceptor, anaerobic respiration requires alternative electron acceptors like nitrate or sulphate2. In the so-called “electron tower”, redox couples are organized according to their redox potential, with the most negative ones located at the top (electron donors) and strongest oxidation agents with positive redox potential at the bottom (electron acceptors). The electron transfer between donors and acceptors leads to energy conservation via the so-called respiratory chain and electrons can be captured by electron acceptors - to stay in the picture - in different floors of the tower. Thereby, the higher the fall of electrons through the electron tower, the more energy can be conserved by the respective reaction. Therefore, respiration is also possible in anaerobic habitats, for example, with redox pairs including NO3-/NO2-, fumaric acid/succinic acid, SO32-/H2S, S°/H2S, Mn(IV)/Mn(II), Fe(III)/Fe(II)2,3. First, the resulting energy is conserved as membrane potential, which is subsequently used by electron transport phosphorylation for adenosine-triphosphate (ATP) synthesis by membrane-bound ATP-synthases. In contrast to aerobic respiration, the amount of energy that can be conserved by anaerobic respiration can be dramatically reduced; however, the energy output of most anaerobic respirations is still higher compared to fermentation, an anaerobic energy conservation path in habitats lacking oxygen and other terminal electron acceptors2.

During fermentation, energy-rich, organic substrates are degraded to various fermentation products that often define the name of the overall process, for example, alcoholic fermentation. In contrast to respiration processes, ATP generation during fermentation is limited to substrate-level phosphorylation during which a phosphate group is transferred to adenosine-di-phosphate (ADP) from an energy-rich phosphorylated substrate2. Fermenting microorganisms play a central role in the anaerobic degradation of organic matter as they are key-players in substrate breakdown. The primary fermentation products, like organic acids, alcohols, CO2, and H2, can subsequently be used by secondary fermenting microorganisms to produce acetic acid, CO2, and H2. Examples for fermentation products include lactic acid, various volatile fatty acids (formic-, acetic-, propionic-, butyric-, valeric acid), n-butanol, 2,3-butandiol, acetone, and ethanol.

The current protocol description will provide appropriate cultivation methods for target microorganisms of a mixed population derived from an anaerobic biogas plant. The isolation and cultivation of pure cultures is even more challenging but not part of this work.

Here, we show the procedure for cultivating an anaerobic microbial community based on a study regarding the formation of phenyl acids during anaerobic digestion of proteinaceous substrates8. The microbial community consisted of members from all four phases of anaerobic digestion: hydrolysis, acidogenesis, acetogenesis, and methanogenesis. A mineral salt medium supplemented with a carbon source, redox-indicator, vitamin and trace element solution, and reducing agent was applied9. The medium was amended with the respective proteinaceous phenyl acid precursor substrates8.

3. Reduction/removal of oxygen in the liquid phase

4. Inoculation of the medium

Cultivation flasks were filled with medium under anaerobic conditions according to the protocol described above, checked for the appropriate color (Figure 1), and used as miniature batch bioreactors conducting anaerobic digestion. These were amended with substrates potentially causing phenyl-acid formation and incubated using anaerobic digester sludge as inoculum (Figure 2). Tryptophan, tyrosine, and phenylalanine, as well as the complex proteinaceous precursor meat extract and casein were applied in two and three different concentrations, respectively. Controls were prepared without additional substrate supplementation. Different substrate concentrations aimed at the simulation of different stages of overload. Flasks were incubated at 37 °C (mesophilic) for 4 weeks.

Biogas production and composition (H2, CH4, CO2) was monitored regularly via gas chromatography (GC TCD)10 and evaluation of headspace pressure. Figure 3 demonstrates differences in the cumulative methane production derived from digestion of the applied substrates in varied concentrations during 4 weeks of anaerobic incubation. Besides, methanogens were visualized by irradiating the coenzyme F420, an electron carrier in methanogenesis, exhibiting a blue-green fluorescence with an absorption maximum at 420 nm (Figure 4).

Concurrent to gas analysis, samples for VFA and phenyl acid concentration measurements via HPLC11 were withdrawn and stored frozen until further processing. Figure 5 shows the effect of different stages of overload as reflected by an accumulation in highly overloaded samples exemplarily depicted for acetate. Figure 6 depicts the dynamics of phenyl acetate concentrations during the incubation period. 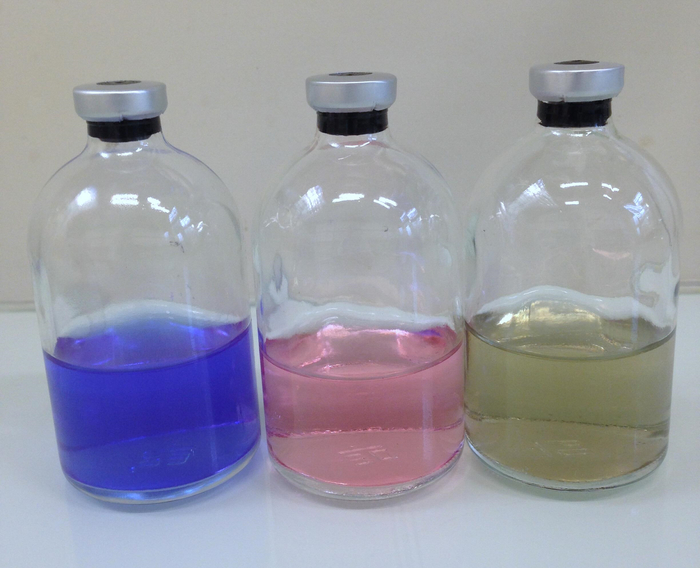 Figure 1: Redox indicator. Correct redox potential in the cultivation flasks can be controlled by adding a redox indicator. Please click here to view a larger version of this figure. 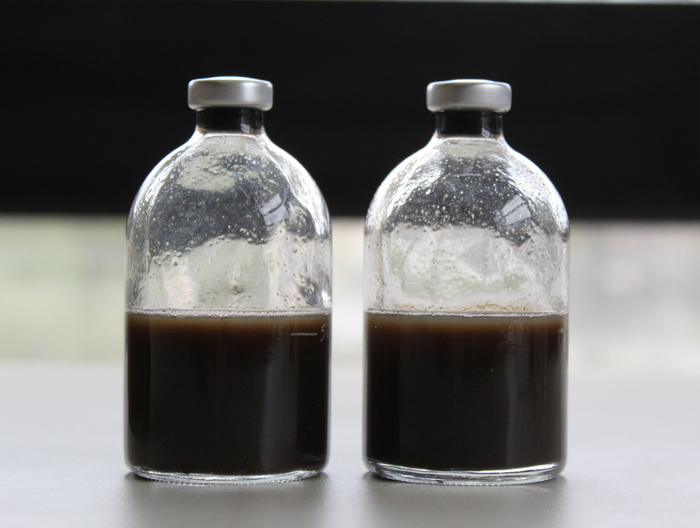 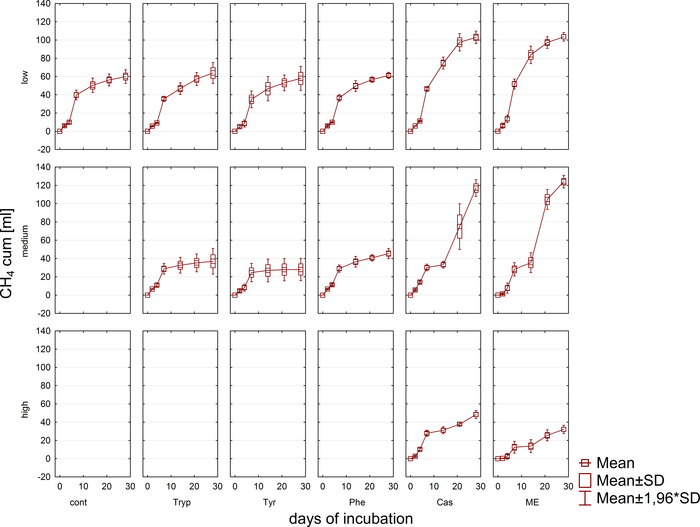 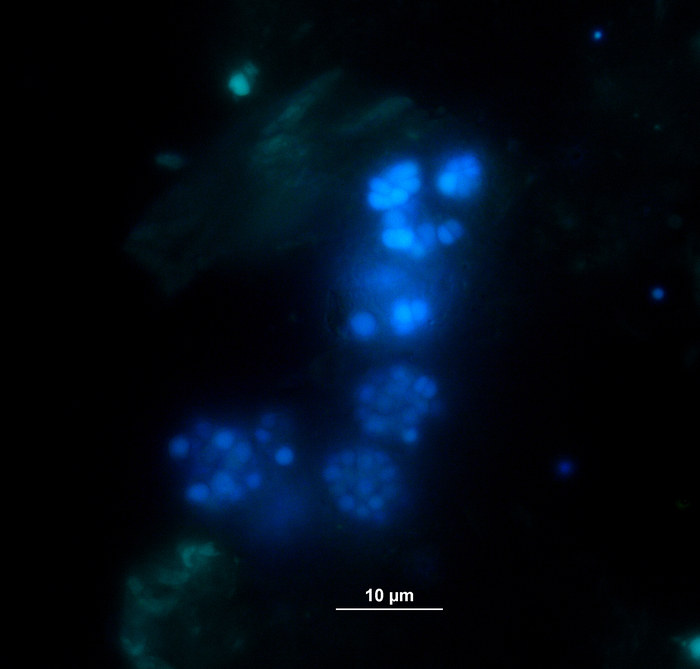 Figure 4: Fluorescing methanogens. Methanogens emit a blueish light when being excited with UV light. Here, methanogens are attached to plant particles (light green). Samples were taken from a batch reactor, diluted for microscopy, and immediately analyzed. Please click here to view a larger version of this figure. 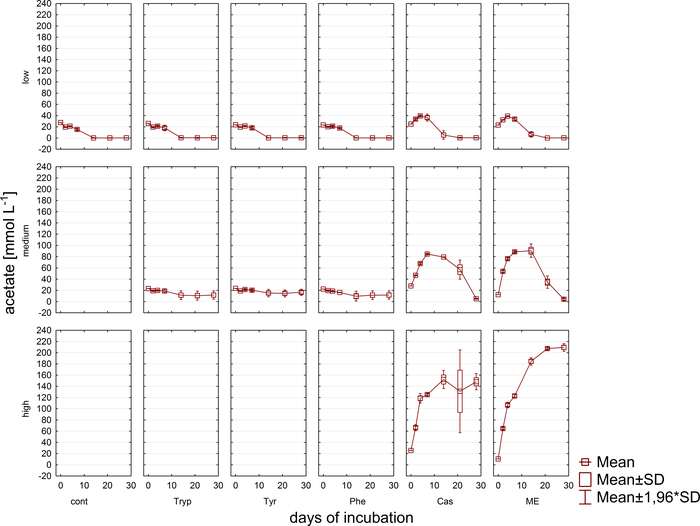 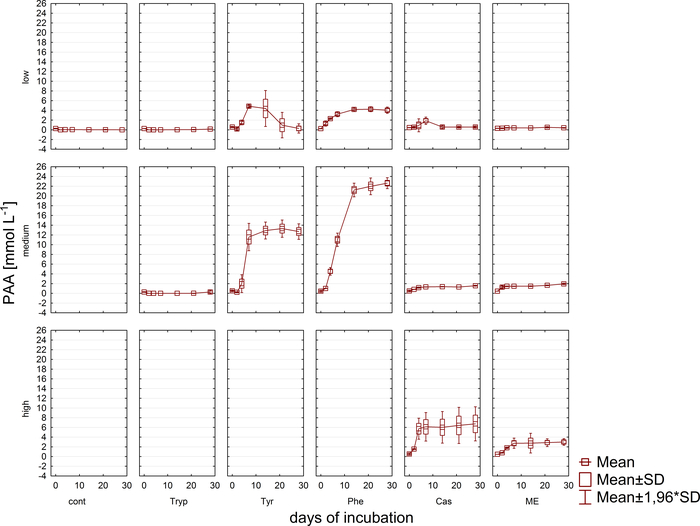 Table 4: Description of variables in Equation 1 - 3.

The most important and critical step in culturing anaerobic microorganisms is to ensure oxygen-free conditions in cultivation media and flasks’ headspace. An indicator like resazurin can be used to indirectly check the correct anaerobic filling of the flasks. Resazurin is a commonly used redox dye as it is inexpensive, non-toxic, and already effective in low doses and short incubation times 12. When incorporated to media, the blue colored resazurin first undergoes an irreversible reduction step to resorufin, which is pink at neutral pH values. This first reaction can occur when the media are heated 13. Subsequently, resorufin is reduced to colorless dihydroresorufin in a reversible secondary reaction (Figure 7)12. The resorufin/dihydroresorufin redox system becomes completely colorless at a standard oxidation-reduction potential of about Eh = -110 mV and turns pink above a redox potential of -51 mV 13.

In order to further reduce the redox potential, for example, to facilitate the growth of methanogenic microorganisms known to require less than -200 mV14, a Na2S solution can be added. Alternatively, cysteine-HCl, sodium-thioglycolate, or sodium dithionite are commonly used. However, which reducing agent is appropriate to use depends on the respective experimental setup and might require special attention. For instance, sodium thioglycolate needs temperature activation (e.g., by autoclaving).

A well-balanced microbial consortium, comprised of various genera of Bacteria and Archaea, and an efficiently working anaerobic degradation cascade can further be evaluated by determining the headspace gas composition in the culture flasks via gas chromatography. When handling compounds like phenyl acids derived from different precursors, the assessment of the headspace is a fast way to check the methanogenesis process8. A headspace CH4 concentration of approx. 50-60% in the controls at the end of the incubation period indicates a successful utilization of the applied nutrients and thus a mineralization of organic material under anaerobic conditions. The theoretical methane production and expectable methane concentrations during the digestion process can be determined ex ante according to the Buswell-Boyle equation after elementary analysis of the substrate or by estimating the content of carbohydrates, proteins, and fats in the substrate. According to VDI 4630 15, carbohydrates can lead to a theoretical biogas production of 750 L kg-1 VSS (50% CH4 and 50% CO2), proteins to 800 L kg-1 VSS (72% CH4 and 28 % CO2), and fats to 1,390 L kg-1 VSS (60% CH4 and 40% CO2).

Moreover, formation and possible subsequent degradation of VFAs and phenyl acids were monitored. The degradation process can be evaluated by analyzing the VFA concentrations (e.g., acetate, propionate) at different time points. Accumulation of short-chain fatty acids like acetate and/or propionate can point to disturbances in the methanogenic community composition and to an overall reactor overload. However, a well-balanced microbial degradation cascade can even cope with very high VFA and acetate concentrations9. Besides, the acetate / propionate ratio might further provide information on the overall reactor condition16. However, there are many parameters suitable for process monitoring that have to be selected according to the proposed experimental hypotheses. In the present example, target variables were phenyl acid concentrations (Figure 6). 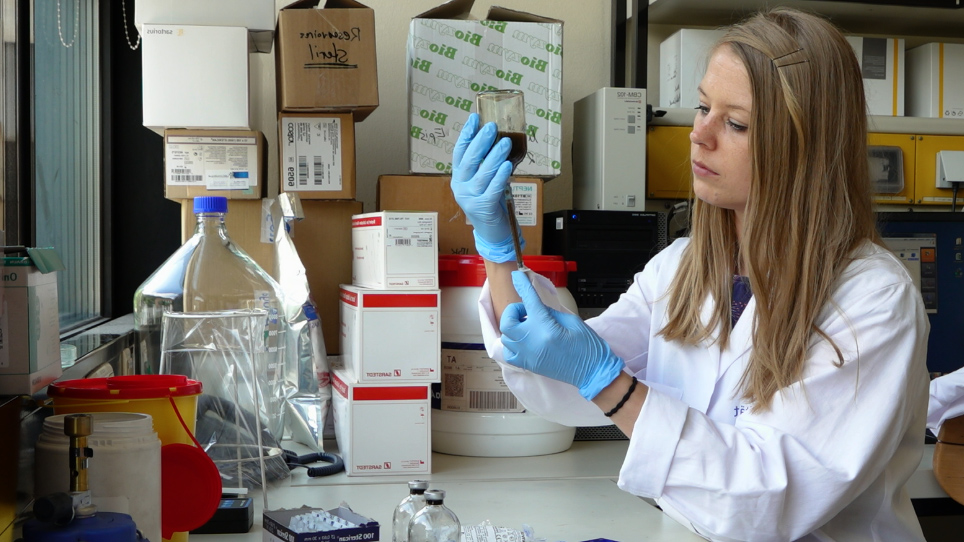