The protocol describes procedures to acquire high-spatial resolution computed tomography (CT) images of a granular soil during triaxial compression, and to apply image processing techniques to these CT images to explore the grain-scale mechanical behavior of the soil under loading.

The rapid development of X-ray imaging techniques with image processing and analysis skills has enabled the acquisition of CT images of granular soils with high-spatial resolutions. Based on such CT images, grain-scale mechanical behavior such as particle kinematics (i.e., particle translations and particle rotations), strain localization and inter-particle contact evolution of granular soils can be quantitatively investigated. However, this is inaccessible using conventional experimental methods. This study demonstrates the exploration of the grain-scale mechanical behavior of a granular soil sample under triaxial compression using synchrotron X-ray micro-tomography (μCT). With this method, a specially fabricated miniature loading apparatus is used to apply confining and axial stresses to the sample during the triaxial test. The apparatus is fitted into a synchrotron X-ray tomography setup so that high-spatial resolution CT images of the sample can be collected at different loading stages of the test without any disturbance to the sample. With the capability of extracting information at the macro scale (e.g., sample boundary stresses and strains from the triaxial apparatus setup) and the grain scale (e.g., grain movements and contact interactions from the CT images), this procedure provides an effective methodology to investigate the multi-scale mechanics of granular soils.

Until now, most of the understanding of the grain-scale mechanical behavior of granular soils has come from discrete element modeling1 (DEM), because of its ability to extract particle-scale information (e.g., particle kinematics and particle contact forces). In earlier studies of using DEM techniques to model granular soil mechanical behaviors, each individual particle was simply represented by a single circle or sphere in the model. The use of such over-simplified particle shapes has led to the over-rotation of particles and thereby a lower peak strength behavior2. To achieve a better modeling performance, many investigators have used a rolling resistance model3,4,5,6 or irregular particle shapes7,8,9,10,11,12 in their DEM simulations. As a result, a more realistic understanding of particle kinematic behavior has been acquired. Aside from particle kinematics, DEM has been increasingly used to investigate grain contact interaction and to develop theoretical models. However, because of the requirement to reproduce real particle shapes and the use of sophisticated contact models, DEM requires extremely high computational capability in the modeling of granular soils with irregular shapes.

Recently, the development of optical equipment and imaging techniques (e.g., the microscope, laser-aided tomography, X-ray computed tomography (CT) and X-ray micro-tomography (μCT)) has provided many opportunities for experimental examination of the grain-scale mechanical behavior of granular soils. Via acquisition and analysis of soil sample images before and after triaxial testing, such equipment and techniques have been utilized in the investigation of soil microstructures13,14,15,16,17,18,19. More recently, in situ tests with X-ray CT or μCT have been increasingly used to investigate the evolution of void ratio20, strain distribution21,22,23,24, particle movement25,26,27,28, inter-particle contact29,30,31 and particle crushing32 of granular soils. Here, “in situ” implies X-ray scanning conducted at the same time as loading. In contrast to general X-ray scanning, in situ X-ray scanning tests require a specially fabricated loading apparatus to deliver stresses to soil samples. With the combined use of the loading apparatus and X-ray CT or μCT device, CT images of the samples at different loading stages of the tests can be acquired non-destructively. Based on these CT images, particle-scale observations of granular soil behavior can be acquired. These CT image-based particle-level observations are extremely helpful to verify numerical findings and to gain novel insights into the grain-scale mechanical behavior of granular soils.

This article aims to share the details of how an X-ray in situ scanning test of a soil sample can be carried out, using an exemplary experiment that observes particle kinematics, strain localization and inter-particle contact evolution within a soil sample. The results show that X-ray in situ scanning tests have a great potential to explore the grain-level behavior of granular soils. The protocol covers the choice of X-ray μCT device and the preparation of a miniature triaxial loading apparatus, and detailed procedures to carry out the test are provided. In addition, the technical steps for using image processing and analysis to quantify the particle kinematics (i.e., particle translation and particle rotation), strain localization, and inter-particle contact evolution (i.e., contact gain, contact loss and contact movement) of the soil are described.

1. Designing the experiment well in advance 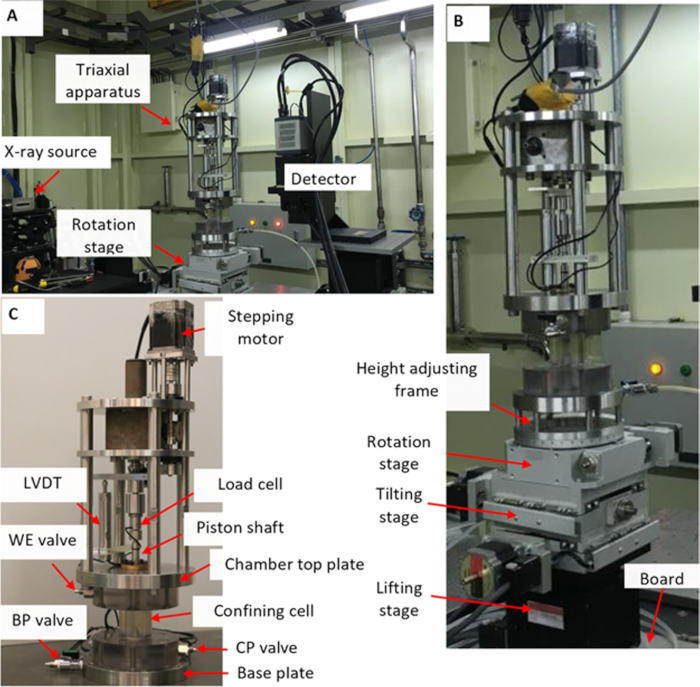 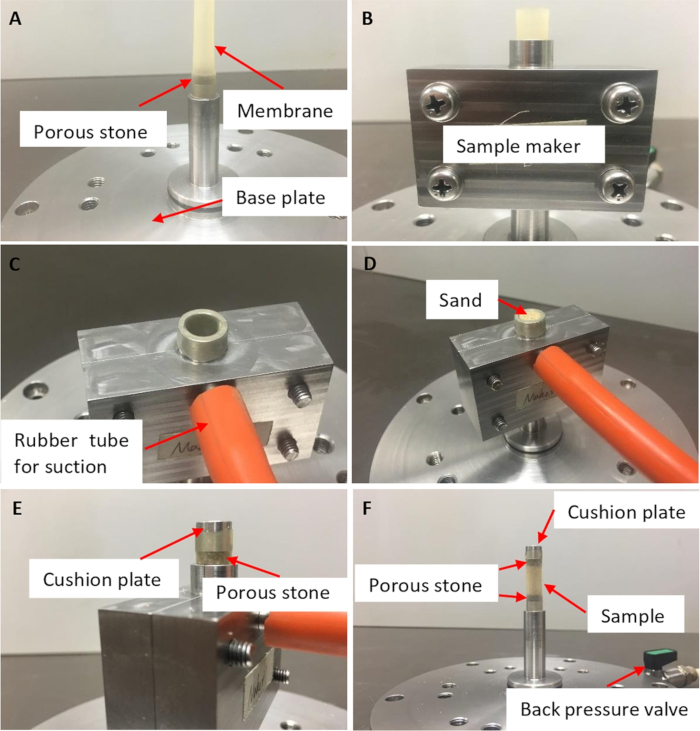 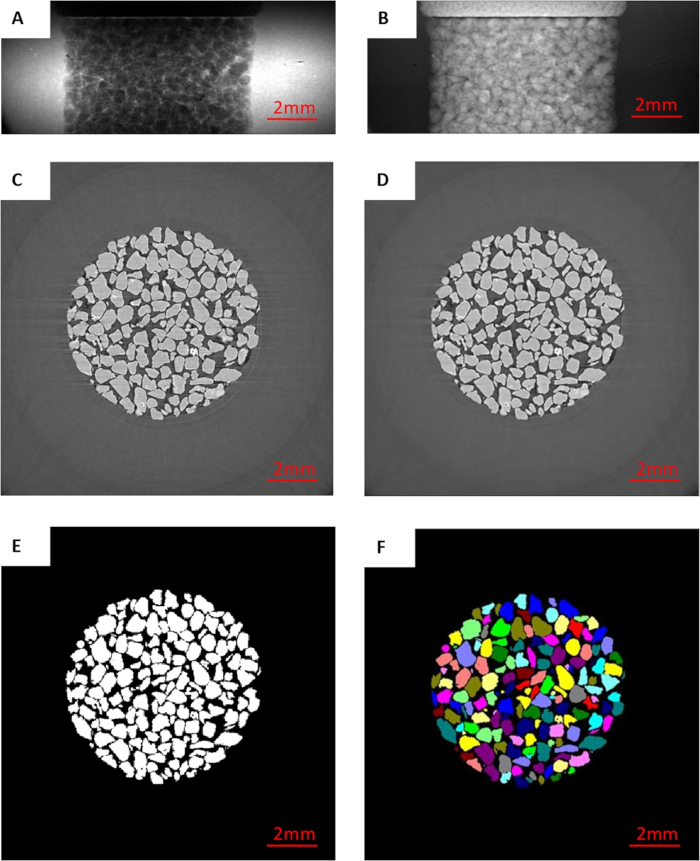 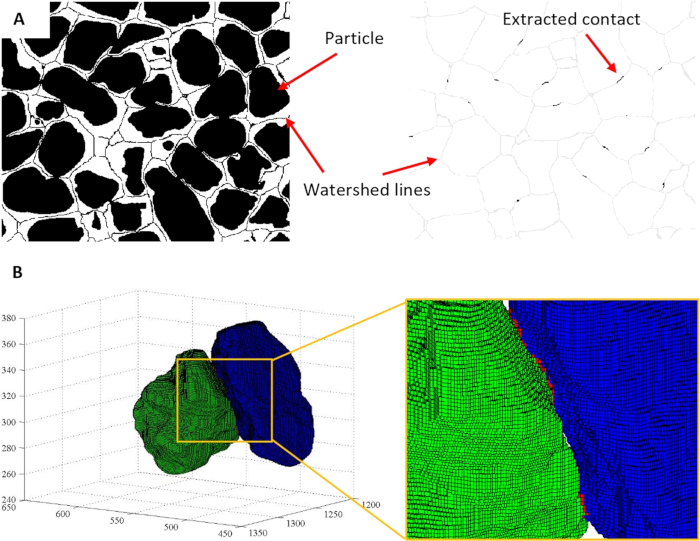 Figure 4: Illustration of the extraction of inter-particle contacts of LBS in 2D slices. (A) Implementation of a logical operation AND between the binary image of a CT slice and the binary image of watershed lines, and (B) a typical contact of two LBS particles in 3D space (particles are shown in green and blue and contact is shown in red). Please click here to view a larger version of this figure. 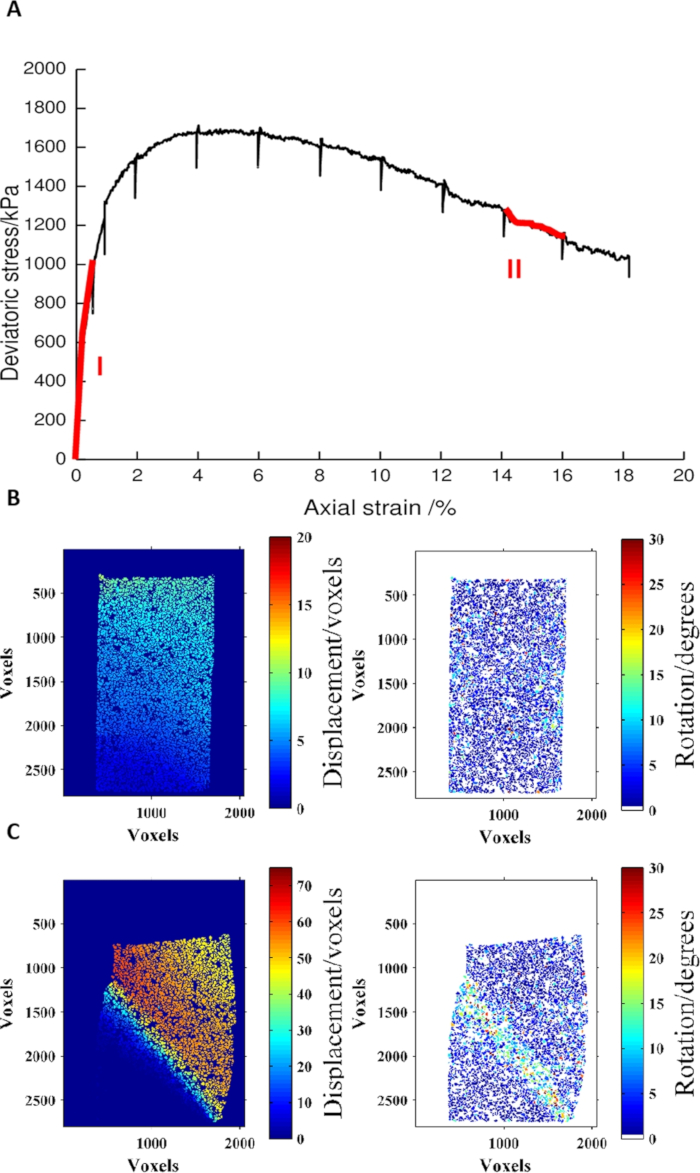 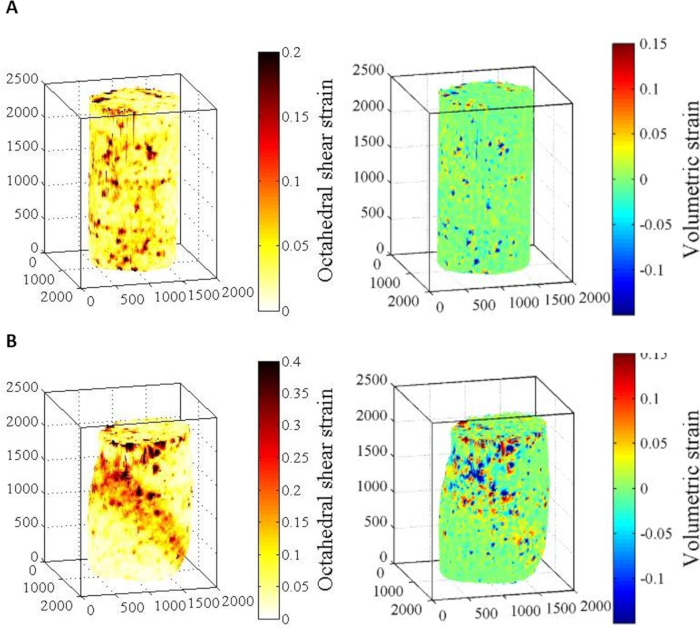 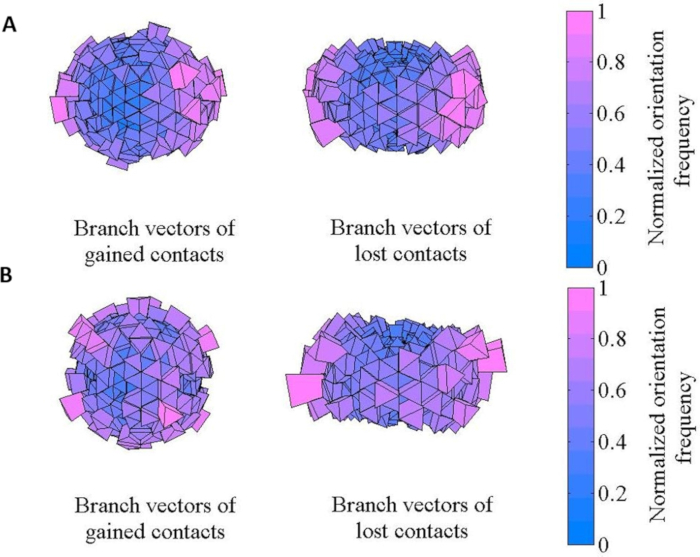 High-spatial resolution X-ray micro-CT and advanced image processing and analysis techniques have enabled the experimental investigation of the mechanical behavior of granular soils under shear at multi-scale levels (i.e., at macro-scale, meso-scale and grain-scale levels). However, CT image-based meso- and grain-scale investigations require the acquisition of high-spatial resolution CT images of soil samples during loading. The most challenging aspect of this process is perhaps the fabrication of a miniature triaxial loading apparatus that can be used in conjunction with an X-ray micro CT device. One should make an overall consideration of the required sample size, loading stresses and rates, in addition to the restrictions of X-ray micro CT devices such as the spatial resolution, scanning area and the load capacity of the rotation stage.

The determination of optimum X-ray energy and exposure time can be time-consuming but is crucial to the acquisition of high-quality CT images. It is recommended that users try different energies and exposure times during their first scan and determine an appropriate energy and exposure time according to the quality of the reconstructed slices. Besides, samples with different initial porosities can be produced during sample preparation by dropping sand particles into the sample mold from different heights. However, because of the small sample size, producing a sample with a specific initial porosity is more difficult in comparison to conventional triaxial tests. To produce a sample with an initial porosity that is close to a specific value for triaxial testing with CT scanning, users are recommended to practice producing samples in advance.

Compared to conventional triaxial testing, miniature in situ triaxial testing has the advantage of being able to explore the grain-scale mechanical behavior of granular soils, including grain kinematics, strain localization and inter-particle contact interaction, etc. Currently, a popular alternative method to investigate the grain-scale mechanical behavior of granular soils is DEM. Although this technique enables the modeling of sand mechanical behavior under complex loading conditions, grain shapes and contact models are generally over-simplified to achieve high computing efficiency in most DEM studies. In this situation, the grain-scale information extracted from real sand using this protocol is needed for improved validation of DEM models at multi-scale levels. Another advantage of the introduced method for CT image-based strain calculation is the incorporation of particle rotation in the strain calculation. The strain calculation method was shown to produce more reliable strain results than a mesh-base method without considering the effects of particle rotations24.

In the future, in situ triaxial testing providing ample data on grain shape and grain kinematics will facilitate the incorporation of real particle shapes in DEM modeling. Subsequently, CT image-based DEM modeling will provide a better understanding of the grain-scale mechanical behavior of granular soils under loading. Meanwhile, given the ability to extract inter-particle contact forces50, a combination of X-ray diffraction with X-ray micro-CT for in situ triaxial testing will be helpful for the extraction of full grain-scale information (i.e., both grain kinematics and grain contact forces) from granular soils under shearing.

This study was supported by the General Research Fund No. CityU 11213517 from the Research Grant Council of the Hong Kong SAR, Research Grant No. 51779213 from the National Science Foundation of China, and the BL13W beamline of the Shanghai Synchrotron Radiation Facility (SSRF). 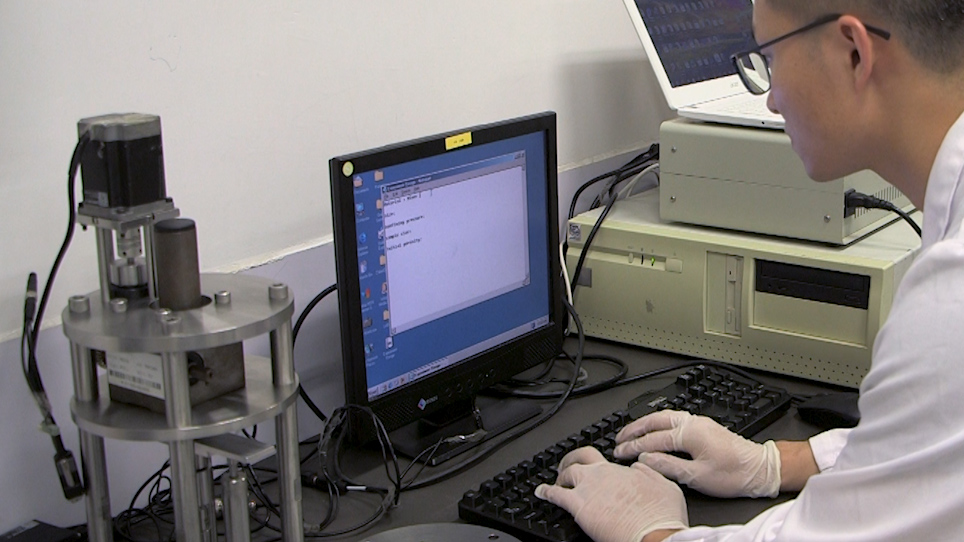