This protocol demonstrates how to measure resting state functional connectivity in the human prefrontal cortex using a custom-made diffuse correlation spectroscopy instrument. The report also discuss practical aspects of the experiment as well as detailed steps for analyzing the data.

To obtain a comprehensive understanding of the human brain, utilization of cerebral blood flow (CBF) as a source of contrast is desired because it is a key hemodynamic parameter related to cerebral oxygen supply. Resting state low frequency fluctuations based on oxygenation contrast have been shown to provide correlations between functionally connected regions. The presented protocol uses optical diffuse correlation spectroscopy (DCS) to assess blood flow-based resting state functional connectivity (RSFC) in the human brain. Results of CBF-based RSFC in human frontal cortex indicate that intra-regional RSFC is significantly higher in the left and right cortices compared to inter-regional RSFC in both cortices. This protocol should be of interest to researchers who employ multi-modal imaging techniques to study human brain function, especially in the pediatric population.

When the brain is in a resting state, it demonstrates a high synchronization of spontaneous activity in functionally related regions, which can be located close in proximity or from a distance. These in-sync regions are known as functional networks1,2,3,4,5,6,7,8,9. This phenomenon was first uncovered by a functional magnetic resonance imaging (fMRI) study using blood oxygen level-dependent (BOLD) signals that indicate oxygenation levels of the cerebral blood5,10, also known as resting state functional connectivity (RSFC). Abnormalities in RSFC have been associated with brain disorders such as autism11, Alzheimer’s12, and depression13. Thus, RSFC is a valuable tool for studying patients with disorders who have trouble performaning task-based assessments. However, many patients, such as young autistic children, are poor candidates for assessment by fMRI, as it requires remaining still inside of a confined space for extended periods of time14,15. Optical imaging is fast and wearable; thus, it is suitable for a majority of patients, particularly the pediatric population16,17,18,19,20,21,22,23,24. Utilizing these advantages, functional near-infrared spectroscopy (fNIRS), which can quantify hemoglobin concentration and oxygen saturation parameters in the brain, is used to measure RSFC in humans (including the pediatric population4,8,25 and patients with autism11).

Optical diffuse correlation spectroscopy (DCS), a relatively new optical technique, can quantify cerebral blood flow, which is an important parameter that associates oxygen supply with metabolism6,17,26,27,28,29. Optical flow contrast quantified by DCS has been shown to have higher sensitivity in the brain compared to oxygenation contrast30. Thus, utilizing DCS-derived CBF parameters for assessing RSFC is advantageous.

DCS is sensitive to moving blood cells. When diffusing photons scatter from moving blood cells, this causes the intensity of detected light to fluctuate over time. DCS measures a time-based intensity autocorrelation function and its decay rate are dependent on the optical parameters and blood flow. These values are ultimately used to obtain the cerebral blood flow index (CBFi). With faster moving blood cells, the intensity autocorrelation function decays faster. Therefore, information about motion deep beneath the tissue surface can be derived (e.g., in the brain) from measurements of diffusing light fluctuations over time27,31,32,33,34,35. DCS is a technique complementary to the widely known fNIRS that measures blood oxygenation17,36. Since both fNIRS and DCS are optical brain imaging techniques with high temporal resolution in the range of milliseconds, the optical imaging set-ups are far less sensitive to motion artifacts than fMRI. They have also been successfully used for functional brain imaging in pediatric populations, including very young infants16. Previously, superficial blood flow measurements have been used to assess RSFC in preclinical studies in mice37. Here, blood flow parameters are used to quantify RSFC in nine healthy adults as a proof-of-concept study38,39.

In this study, a commercial FD-fNIRS system and custom DCS system is used (see Table of Materials). The DCS that was built in-house is comprised of two 785 nm, 100 mW, long coherence length continuous-wave lasers that are coupled to an FC connector and eight single-photon counting machines (SPCM) connected to an auto-correlator. A custom software graphical user interface (GUI) was also made specifically for this system to display and save the photon counts, autocorrelation curves, and semi-quantitative blood flow of each SPCM channel in real-time. The parts in this system are commonly used for DCS16,17,31,32,40,42,43,44, and the results obtained have also been verified in-house and used in a recent study39.

The protocol was approved by the Institutional Review Board at Wright State University, and informed consent was obtained from each participant prior to the experiment.

CAUTION: As a general precaution, do not look at the light sources and fiber outputs directly to avoid potential eye damage. Use the IR sensor card (see Table of Materials). 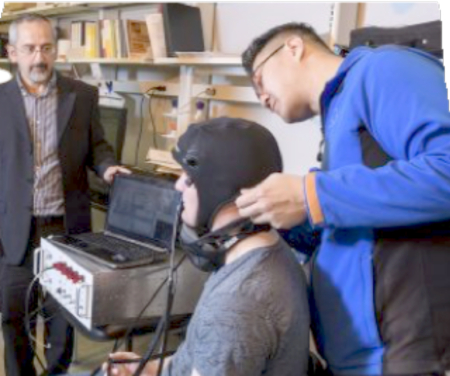 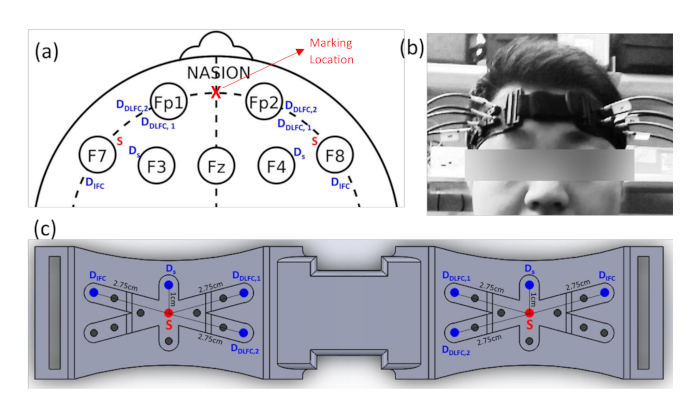 Figure 2: Probe schematic and placement. (A) Placement of the probes as shown on the EEG 80-20 system map. (B) An example of the 3D-printed probe with optical fibers worn by the subject. (C) The CAD model of the location of the detectors (D) and sources (S) in the dorsolateral frontal cortex (DLFC) and inferior frontal cortex (IFC). Please click here to view a larger version of this figure.

Figure 3: Representative sample of data using detectors in the same region at the same source-detector separation. Shown is an autocorrelation curve (g2) with respect to the lag time (τ). (A) Data when the probe has sufficient contact, showing high counts and a good fit to the analytical model. (B) Data (exaggerated) with ambient light leaking into the probe as observed by a lower y-intercept (beta). This is usually due to a combination of poor contact and strong background light, requiring adjustments to be made. (C) Data (exaggerated) with a motion artifact while the g2 curve is being averaged. Please click here to view a larger version of this figure. 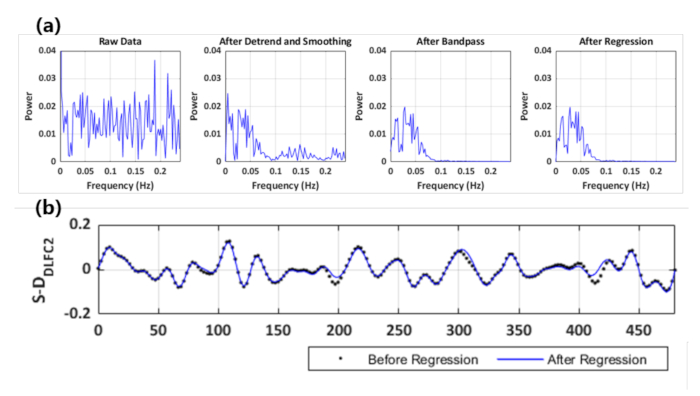 Figure 4: Analysis of representative data obtained from one subject. (A) A plot of the power spectrum after each of the processing steps. (B) An example showing the time series of the normalized blood flow signal on one of the channels before and after regression of the short distance channel (scalp signal). Please click here to view a larger version of this figure. 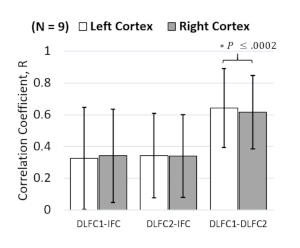 The DCS technique showed high connectivity within the DLFC areas but lower connectivity between the IFC and DLFC areas, which is consistent with similar studies performed with other methods such as fMRI. These results demonstrate the potential of DCS as a non-invasive means to assess RSFC in humans. When combined with other imaging modalities such as fNIRS, accurate characterization of neuronal diseases such as autism becomes viable. Although concurrent measurements of fNIRS and DCS remain a challenge, several approaches to this problem have been explored19,20,21,23,27,28,60,61,62,63,64,65. In a pilot study, the isolated, lighter DCS probes were chosen for better contact. In the future, the probe design can be improved, fNIRS fibers can be inserted next to DCS fibers, and light sources can be sequentially illuminated as previously demonstrated. In summary, DCS will serve as a complement to other techniques and become a useful tool for non-invasive assessment of brain function in young and disabled patients.

The authors would like to acknowledge financial support from the Ohio Third Frontier to the Ohio Imaging Research and Innovation Network (OIRAIN, 667750), and the National Natural Science Foundation of China (No. 81771876). 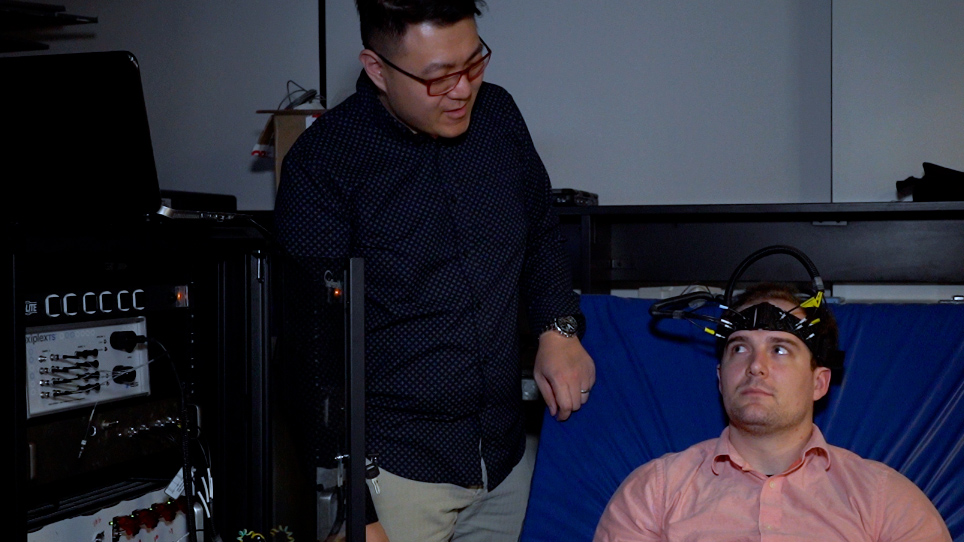