The procedures presented describe a generalized methodology to infect Aedes aegypti mosquitoes with Zika virus under laboratory conditions to determine the rate of infection, disseminated infection, and potential transmission of the virus in the mosquito population in question. These procedures are widely utilized with various modifications in vector competence evaluations globally. They are important in determining the potential role that a given mosquito (i.e., species, population, individual) may play in the transmission of a given agent.

Vector competence is defined as the ability at the level of species, population, and even an individual, of a given arthropod such as a mosquito, tick, or phlebotomine sand fly, to acquire and transmit an agent biologically with replication or development in the arthropod1,2. With respect to mosquitoes and arthropod-borne viruses (i.e., arboviruses), the agent is imbibed from a viremic host by a female mosquito. Following ingestion, the virus must productively infect one of a small population of midgut epithelial cells3, overcoming various physiological obstacles such as proteolytic degradation by digestive enzymes, the presence of the microbiota (midgut infection barrier, or MIB), and the secreted peritrophic matrix. Infection of the midgut epithelium must be followed by replication of the virus and eventual escape from the midgut into the mosquito’s open circulatory system, or hemolymph, which represents the onset of a disseminated infection overcoming the midgut escape barrier (MEB). At this point the virus can establish infections of secondary tissues (e.g., nerves, muscles, and fat bodies) and continue to replicate, although such secondary replication may not be strictly necessary for the virus to infect the acinar cells of the salivary glands (overcoming the salivary gland infection barrier). Egress from the salivary gland acinar cells into their apical cavities and then movement into the salivary duct enables inoculation of the virus into subsequent hosts on biting, and completes the transmission cycle1,2,4,5,6,7.

Given this well-characterized and generally conserved mechanism of spread within a mosquito vector, laboratory vector competence assessments are often methodologically similar, although differences in protocols do exist1,2. Generally, after oral virus exposure, mosquitoes are dissected so that individual tissues such as the midgut, legs, ovaries, or salivary glands can be assayed for viral infection, disseminated infection, disseminated infection/potential transovarial transmission, and disseminated infection/potential transmission competence, respectively8. The mere presence of a virus in the salivary glands, however, is not definitive evidence of transmission capability, given evidence of a salivary gland escape/egress barrier (SGEB) in some vector/virus combinations1,2,4,5,7,9. The standard method to prove transmission competence remains mosquito transmission to a susceptible animal10,11,12. However, given that for many arboviruses this necessitates the use of immunocompromised murine models13,14,15,16, this method is often cost-prohibitive. A commonly used alternative is the collection of the mosquito saliva, which can be analyzed by reverse transcription-polymerase chain reaction (RT-PCR) or an infectious assay to demonstrate the presence of the viral genome or infectious particles, respectively. It is worth noting that such in vitro saliva collection methods may overestimate12 or underestimate17 the amount of virus deposited during in vivo feeding, indicating that such data must be interpreted with caution. Nonetheless, the in vitro method is highly valuable when analyzed from the perspective of the mere presence of virus in the saliva, indicating transmission potential.

Two major approaches exist for determining the role of mosquito vectors in arboviral disease outbreaks. The first method involves field surveillance, in which mosquitoes are collected in the context of active transmission18,19,20,21,22,23,24. However, given that infection rates are typically quite low (e.g., the estimated 0.061% infection rate of mosquitoes in areas of active Zika virus (ZIKV) circulation in the United States21), incrimination of potential vector species can be heavily biased by trapping methodology25,26 and random chance (e.g., sampling one infected individual out of 1,600 uninfected)21. Taking this into account, a given study may not acquire sufficient mosquitoes in both raw numbers or species diversity to accurately sample mosquitoes involved in transmission. In contrast, vector competence analyses are undertaken in a laboratory setting, allowing for strict control of parameters such as oral dose. Although not fully capable of representing the true complexity of mosquito infection and transmission capability in a field setting, these laboratory assessments remain powerful tools in the field of arbovirology.

Based on various vector competence analyses with ZIKV in several mosquito species, populations, and methods27,28,29,30,31,32, as well as a recent review of vector competence assessments1, we describe here several of the protocols associated with a typical vector competence workflow. In these experiments, three Ae. aegypti populations from the Americas (the city of Salvador, Brazil; the Dominican Republic; and the lower Rio Grande Valley, TX, USA) were exposed to a single strain of ZIKV (Mex 1-7, GenBank Accession: KX247632.1) at 4, 5, or 6 log10 focus-forming units (FFU)/mL doses by way of artificial bloodmeals. Subsequently, they were analyzed for evidence of infection, disseminated infection, and transmission competence after various times of extrinsic incubation (2, 4, 7, 10, and 14 days) by means of dissection and a cell culture-based infectious assay. Although the present workflow/protocols are optimized for ZIKV, many elements are directly translatable to other mosquito-borne arboviruses in arthropod containment and biosafety levels 2 and 3 (ACL/BSL2 or ACL/BSL3).

6. Detection of ZIKV by infectious assay

Three populations of Ae. aegypti from the Americas (Salvador, Brazil; the Dominican Republic; and the Rio Grande Valley, TX, USA) were exposed to an outbreak strain of ZIKV from the Americas (ZIKV Mex 1-7, Chiapas State, Mexico, 2015) over a range of bloodmeal titers (4, 5, and 6 log10 FFU/mL) presented in a washed human erythrocyte-based artificial bloodmeal. At days 2, 4, 7, 10, and 14 postinfection, subsets of mosquitoes were processed to determine infection, dissemination, and potential transmission rates.

At a bloodmeal titer of 4 log10 FFU/mL of ZIKV Mex 1−7, Ae. aegypti from Salvador, Brazil were infected at rates of 12.5% and 11.1% after 4 and 14 days of extrinsic incubation, respectively, with no evidence of disseminated infection observed in the assayed legs, and no virus detected in the saliva (Figure 1a). Increasing the titer to 5 log10 FFU/mL resulted in a marginal increase in infectivity with rates of 22.2%, 33.3%, and 22.2% on days 4, 10, and 14 postinfection, respectively. Similar to what was observed in the cohort exposed to 4 log10 FFU/mL, no disseminated infections or transmission competence was observed at any time point (Figure 1b). At the highest examined titer (6 log10 FFU/mL) no infections were identified after 2 days of incubation, but infections were observed at all other time points, peaking at 88.9% by 10 days of extrinsic incubation. ZIKV was detected in the legs of mosquitoes examined at 10 and 14 days postinfection (22.2% and 66.7%, respectively), indicating that ZIKV had disseminated into the hemocoel, although infectious ZIKV was observed in saliva at these time points (Figure 1c). 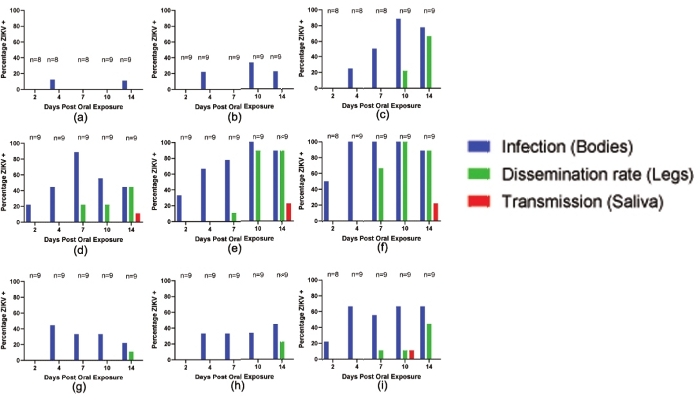 The methods described here provide a generalized workflow to conduct vector competence analyses. As a general framework, many of these methodologies are conserved throughout the literature. However, there is substantial room for modifications (reviewed in Azar and Weaver1). Virus (e.g., viral lineage, storage of challenge virus, viral passage history), entomology (e.g., laboratory colonization of mosquito populations, innate immunity, the mosquito microbiome/virome), and experimental variables (e.g., bloodmeal composition, sequential blood feeding, and incubation temperature) are all known to affect vector competence. Methodological variability in competence studies has proven problematic in the context of the ZIKV outbreak because it has precluded formal meta-analyses1,33.

Within this general methodology, the importance of the appropriate starvation of mosquitoes and bloodmeal makeup cannot be overstated. Dehydration is known to drive blood feeding behavior of mosquitos in laboratory paradigms34, underscoring the value of sugar and water starvation prior to offering an infectious bloodmeal. While deprivation of sugar for 36–48 h and water for 2–4 h prior to exposure to the bloodmeal is well tolerated by Ae. aegypti, it is worth noting that these mosquitoes are notoriously easy to work with in laboratory conditions2. Such aggressive regimens of starvation may not be nearly as well tolerated by other mosquito species, necessitating some degree of in-house optimization. Likewise, bloodmeal contents may be informed by host preference. For example, using human blood to prepare a bloodmeal for anthropophilic mosquitos like Ae. aegypti is entirely appropriate, but human bloodmeals made for ornithophilic species such as Culex quinquefasciatus may prove less effective35. Additionally, with respect to bloodmeal assembly, the use of relatively fresh blood products is highly advisable to minimize hemolysis of erythrocytes.

One of the greatest limitations of vector competence assessment as a whole and the procedures described herein is that these studies are largely limited to investigating viruses using mosquitoes that can be maintained in laboratory conditions. Ae. aegypti, while a highly relevant vector for a multitude of pathogens of clinical importance, also happens to be one of the easiest mosquitoes to rear and maintain in laboratory colonies1,31,36,37. Unsurprisingly, the competence of Ae. aegypti populations is often therefore the best characterized among common vector mosquitoes2. This is particularly problematic in the context of arboviruses that maintain both enzootic and urban transmission cycles38,39,40, as vector competence is generally only conducted in the context of the more tractable urban mosquitoes.

We acknowledge the staff of the World Reference Center for Emerging Viruses and Arboviruses (WRCEVA): Dr. Robert Tesh, Hilda Guzman, Dr. Kenneth Plante, Dr. Jessica Plante, Dionna Scharton, and Divya Mirchandani, for their tireless work in curating and providing many of the viral strains used for our and other groups’ vector competence experiments. The presented work was funded by the McLaughlin Fellowship Fund (SRA) and NIH grants AI120942 and AI121452.