A method is described to create organoids using patient-derived xenografts (PDX) for in vitro screening, resulting in matched pairs of in vivo/in vitro models. PDX tumors were harvested/processed into small pieces mechanically or enzymatically, followed by the Clevers’ method to grow tumor organoids that were passaged, cryopreserved and characterized against the original PDX.

Patient-derived tumor xenografts (PDXs) are considered the most predictive preclinical models, largely believed to be driven by cancer stem cells (CSC) for conventional cancer drug evaluation. A large library of PDXs is reflective of the diversity of patient populations and thus enables population based preclinical trials (“Phase II-like mouse clinical trials”); however, PDX have practical limitations of low throughput, high costs and long duration. Tumor organoids, also being patient-derived CSC-driven models, can be considered as the in vitro equivalent of PDX, overcoming certain PDX limitations for dealing with large libraries of organoids or compounds. This study describes a method to create PDX-derived organoids (PDXO), thus resulting in paired models for in vitro and in vivo pharmacology research. Subcutaneously-transplanted PDX-CR2110 tumors were collected from tumor-bearing mice when the tumors reached 200-800 mm3, per an approved autopsy procedure, followed by removal of the adjacent non-tumor tissues and dissociation into small tumor fragments. The small tumor fragments were washed and passed through a 100 µm cell strainer to remove the debris. Cell clusters were collected and suspended in basement membrane extract (BME) solution and plated in a 6-well plate as a solid droplet with surrounding liquid media for growth in a CO2 incubator. Organoid growth was monitored twice weekly under light microscopy and recorded by photography, followed by liquid medium change 2 or 3 times a week. The grown organoids were further passaged (7 days later) at a 1:2 ratio by disrupting the BME embedded organoids using mechanical shearing, aided by addition of trypsin and the addition of 10 µM Y-27632. Organoids were cryopreserved in cryo-tubes for long-term storage, after release from BME by centrifugation, and also sampled (e.g., DNA, RNA and FFPE block) for further characterization.

Cancers are a collection of diverse genetic and immunological disorders. Successful development of effective treatments is highly dependent on experimental models that effectively predict clinical outcomes. Large libraries of well-characterized patient-derived xenografts (PDXs) have long been viewed as the translational in vivo system of choice to test chemo- and/or targeted therapies due to their ability to recapitulate patient tumor characteristics, heterogeneity and patient drug response1, thus enabling Phase II-like mouse clinical trials to improve clinical success2,3. PDXs are generally considered as cancer stem cell diseases, featuring genetic stability, in contrast to cell line derived xenografts2. Over the last few decades, large collections of PDXs have been created throughout the world, becoming the workhorse of cancer drug development today. Although widely used and with great translational value, these animal models are intrinsically costly, time consuming and low throughput, therefore inadequate for large scale screening. PDX are also undesirable for immuno-oncology (IO) testing due to an immune-compromised nature4. It is thus impractical to take full advantage of the available large library of PDXs.

Recent discoveries, pioneered by the Hans Clevers’ laboratory5, have led to the establishment of in vitro cultures of organoids generated from adult stem cells in most human organs of epithelial origin5. These protocols have been further refined to allow the growth of organoids from assumed CSCs in human carcinomas of various indications6,7. These patient-derived organoids (PDOs) are genomically-stable8,9 and have been shown to be highly predictive of clinical treatment outcomes10,11,12. In addition, the in vitro nature of PDOs enables high-throughput screening (HTS)13, thus potentially offering an advantage over in vivo models and leveraging large organoid libraries as a surrogate of the patient population. PDOs are poised to become an important discovery and translational platform, overcoming the many limitations of PDXs described above.

Both PDO and PDX are patient-derived and CSC-driven models, with the ability to evaluate therapeutics in the context of either personalized treatment or clinical trial format. Existing large libraries of PDXs, like the proprietary collection of >3000 PDXs14,15,16,17, are therefore suitable for the rapid generation of libraries of tumor organoids (PDX-derived organoids, or PDXO), resulting in a matched library of paired PDX and PDXO models. This report describes the procedure to create and characterize colorectal cancer PDXO-CR2110 in relation to its parental PDX-CR2110 model16.

NOTE: All the following steps were performed inside a biosafety cabinet per tissue culture standard guidelines. Keep pre-warmed stocks of 96-, 24-, and 6-well plates in a 37 °C incubator before use.

Morphology of PDXOs, typical of organoids under light microcopy, and consistent with parental PDX per H&E staining
Under light microscopy, PDXO-CR2110 demonstrates typical cystic morphology (Figure 1A), as described previously for patient-derived organoids (PDO), evidence supporting the similarity between PDXO and PDO under the same culture conditions.

Histopathological examination by H&E staining reveals that the tissue structures and cell types of PDXO-CR2110 (Figure 1B) are reflective of the original PDX-CR2110 (Figure 1C), supporting that the PDX and PDXO were developed from the same origin: CR2110. This observation provides histopathology evidence to support the similarity of PDXO to its parental PDX.

Transcriptome expression and whole exome sequencing demonstrates high correlation between PDXO-CR2110 and the parental PDX-CR2110
PDX-CR2110 tumors have been previously genomically-profiled using transcriptome sequencing (RNAseq, mRNA)16 and whole exome (WES, DNA) sequenced. We now have similarly profiled the corresponding PDXO-CR2110. The genomic profile comparisons of the corresponding matched PDX and PDXO (Figure 2) demonstrate a high correlation of 94.92% in transcriptome (mRNA) expression (epigenetic) and a high concordance of 97.67% of DNA mutations (WES) (genetic), suggesting an overall genomic similarity between this pair of models.

Similarities observed for the pharmacological properties between in vitro PDXO-CR2110 and in vivo PDX-CR2110
Drug sensitivity assays were performed on PDXO-CR2110 in 384-well plates, with results shown in Figure 3A. PDXO-CR2110 was sensitive to irinotecan and resistant to cisplatin, consistent with PDX treatment results (Figure 3B) where TGI (tumor growth inhibition) at dose levels of 100 mg/kg, i.p., Q3Dx3 for irinotecan and 5 mg/kg, i.p., Q4Dx4 for cisplatin is 84.63% and 6.61% respectively. This observed pharmacology consistency supports the potentially biological equivalence of both models, and can be used for complementary pharmacology studies in vitro and in vivo. 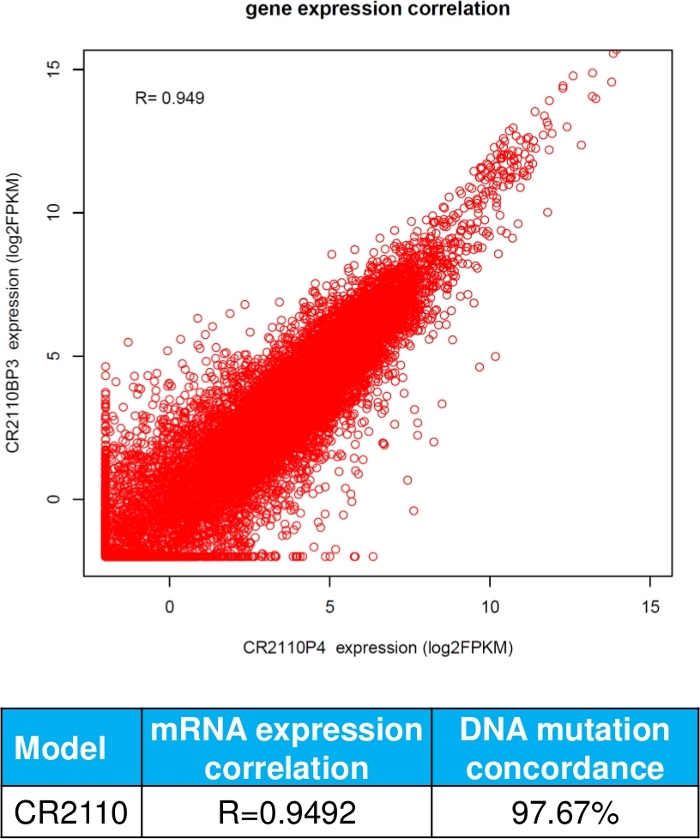 The preliminary data for PDX-/PDXO-CR2110 in this report supports the biological equivalence between PDX and its derivative, PDXO, with regards to genomics, histopathology and pharmacology, since both models represent the disease forms from the original CSC of patient. Both models are patient-derived disease models, potentially predictive of the clinical response of patients10,11,12,21. The matched pair of in vitro and in vivo models can complement each other for in vitro screening and validation in vivo, improving the success rate of drug discovery and potentially reducing attrition rates in clinical development. It is worth noting that PDXO can now enable HTS to take advantage of available large patient-derived organoid libraries, where PDXs fail due to high in vivo costs and longer timelines. Needless to say, a matched PDX-PDXO library would likely become the platform of choice to support drug discovery and translational research in the near future.

Converting the existing library of annotated PDX models could be a fast and productive approach to building a practical organoid library by employing an industrial process. This report converted one PDX to PDXO to explore the feasibility of such a process, and the method used could be a foundation to support large scale process to build an extensive PDXO library. Practically, the methods to create PDXO are generally similar to the widely described method for the generation of PDO18, with the exception of the source of the patient tissue being mice.

There are critical steps to ensure that PDXOs are successfully created: 1) the fresh PDX tumors are fragmented to small pieces; 2) the culture conditions described for organoid culture as described by Clevers and colleagues are faithfully implemented18,22, but may be adjusted for different organoids; 3) different organoids have different growth rates, impacting the duration for organoid culture and health, as well as drug treatment duration; 4) an effective assay to determine mouse content vs. human content is absolutely critical to ensure the cultures are largely human organoid, since some cultures may inevitably have persistent mouse tissue/cell contamination (in the case reported here, there is minimal mouse tissue contamination, data not shown). Mouse contamination could be one of the important limitations in creating PDXO biobanks if effective detection and removal methods are not used.

All authors are or were current full-time employees of Crown Bioscience, Inc. 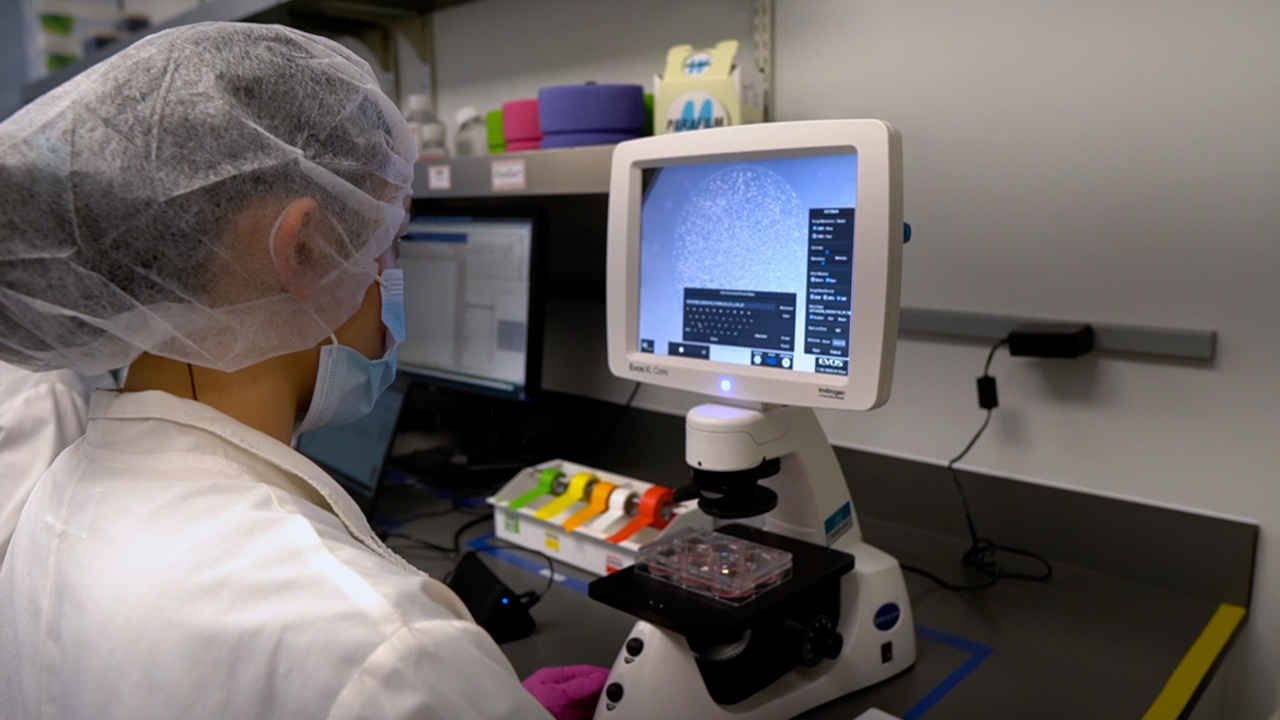