We describe a qualitative assay for yeast adhesion and agar invasion as a measure of invasive and pseudohyphal differentiation. This simple assay can be used to assess the invasive phenotype of various mutants as well as the effects environmental cues and signaling pathways on yeast differentiation.

Yeasts are found in natural biofilms, where many microorganisms colonize surfaces. In artificial environments, such as surfaces of man-made objects, biofilms can reduce industrial productivity, destroy structures, and threaten human life. 1-3 On the other hand, harnessing the power of biofilms can help clean the environment and generate sustainable energy. 4-8 The ability of S. cerevisiae to colonize surfaces and participate in complex biofilms was mostly ignored until the rediscovery of the differentiation programs triggered by various signaling pathways and environmental cues in this organism. 9, 10 The continuing interest in using S. cerevisiae as a model organism to understand the interaction and convergence of signaling pathways, such as the Ras-PKA, Kss1 MAPK, and Hog1 osmolarity pathways, quickly placed S. cerevisiae in the junction of biofilm biology and signal transduction research. 11-20 To this end, differentiation of yeast cells into long, adhesive, pseudohyphal filaments became a convenient readout for the activation of signal transduction pathways upon various environmental changes. However, filamentation is a complex collection of phenotypes, which makes assaying for it as if it were a simple phenotype misleading. In the past decade, several assays were successfully adopted from bacterial biofilm studies to yeast research, such as MAT formation assays to measure colony spread on soft agar and crystal violet staining to quantitatively measure cell-surface adherence. 12, 21 However, there has been some confusion in assays developed to qualitatively assess the adhesive and invasive phenotypes of yeast in agar. Here, we present a simple and reliable method for assessing the adhesive and invasive quality of yeast strains with easy-to-understand steps to isolate the adhesion assessment from invasion assessment. Our method, adopted from previous studies, 10, 16 involves growing cells in liquid media and plating on differential nutrient conditions for growth of large spots, which we then wash with water to assess adhesion and rub cells completely off the agar surface to assess invasion into the agar. We eliminate the need for streaking cells onto agar, which affects the invasion of cells into the agar. In general, we observed that haploid strains that invade agar are always adhesive, yet not all adhesive strains can invade agar medium. Our approach can be used in conjunction with other assays to carefully dissect the differentiation steps and requirements of yeast signal transduction, differentiation, quorum sensing, and biofilm formation.

Yeast cells display various differentiation modes according to nutrient availability and environmental conditions, including spore formation under starvation and stress conditions, filamentation under various nutrient stresses, and flocculation. Various yeasts, including S. cerevisiae and C. albicans, can also be found in biofilms formed by a diverse set of microorganisms. Though there is some correlation with filamentation and invasive behavior, it is not clear exactly how filamentation might cause invasion and colonization of surfaces and tissues. Yeast can certainly be found in both vegetative and filamentous forms in biofilms in nature as well as places where they threaten human health, such as catheters and infected human organs. 10-13 In order to understand the signaling pathways utilized by yeasts to infect animals and to participate in harmful and beneficial biofilms, we must develop accessible and reliable assays. Here we have developed an assay, adopted from already existing adhesion and invasion assays available for yeast, which allow us to qualitatively determine the adhesive and invasive phenotypes of yeast strains and mutants in various conditions. The assay presented here eliminates the requirement for streaking yeast cells onto the agar, where the mere action of streaking the agar surface changes the invasive and adhesive qualities of yeast. Digital imaging of especially the invading cells by a microscope allows for semi-quantitative assessment of the degree of invasion and adhesion. Such detection of invasive and adhesive cells is complimentary the single cell agar invasion assay developed by the Sprague lab 9 and can be adapted to do time course experiments.

We would like to thank Lisa Schneper and Katrin Duevel for their insights in developing this assay. 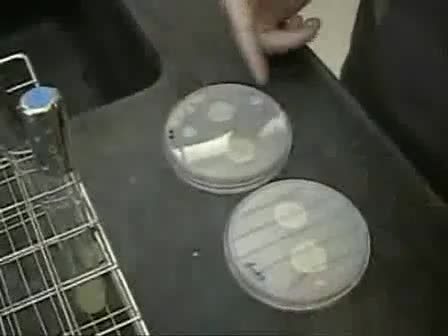