Herein, a protocol to conduct the Morris water maze tests to evaluate the ability of learning and memory of Alzheimer’s Disease model mice and to assess the effect of manual acupuncture for treating them is described.

A Morris water maze (MWM) experiment forces experimental animals to swim and learn to find a platform hidden in the water. It is widely used in scientific research to assess the learning and memory of animals. Due to the extensive use of the MWM test, visual experimental protocols are essential for researchers. This manuscript uses the latest studies to introduce the protocol of the MWM test. Alzheimer’ Disease (AD) is characterized by a progressive loss of memory and cognitive function. An alternative and complementary treatment used for AD is Manual Acupuncture (MA). To assess the learning and memory ability of AD model mice, the MWM test was conducted. The visible platform trial, hidden platform trial, probe trial, and reversal trial of MWM were used to evaluate spatial learning and memory ability. In the visible platform trial, the swimming speed and escape latency of mice in different groups was not significantly different. In the hidden platform and reversal trials, the AD group showed a long escape latency. The escape latency decreased significantly after the MA treatment. Low platform crossover number and the proportion of time in the SW quadrant in the probe trial increased after the MA treatment (p < 0.05 or p < 0.01). The results of the MWM tests suggest that MA can effectively improve the spatial learning and memory abilities of AD model mice. Rigorous experimental operations provided assurance of the reliability of the results.

Currently, the MWM experiment has become the most widely used and the standard behavioral experiment to evaluate the spatial learning and memory of animals1. It was initially designed by the British psychologist Richard G. Morris and has constantly been improved. Many advantages such as minimal training, cross-species utility, insensitivity to differences in body weight, and repeated testing ability of MWM make it the best method for assessing cognitive function2. Alzheimer’s disease (AD) is a major medical problem, primarily characterized by a decline in memory processing and cognitive function3. MWM is an indispensable experimental means to evaluate the learning and memory ability of AD model animals and the effectiveness of intervention methods. MWM experiments are generally time consuming (6–11 days) and involve many variable factors4. Although there are many articles about water maze experiments, in practice, researchers lack a coherent protocol. Therefore, an intuitive and rigorous protocol process video is particularly important. Using a previous experiment as an example5, all the steps of the MWM are described. Using MWM, previous studies suggested that acupuncture could relieve the symptoms of AD model mice5,6,7.

Herein, the MWM protocol used in a recent study5 is described to provide a simple and visible method for researchers to assess the spatial learning and memory of AD model animals.

This protocol was approved by the Animal Ethics Committee of Beijing University of Chinese Medicine, and it was in accordance with all guidelines for the Care and Use of Laboratory Animals of China. There was no accidental death situation during the experimental procedure, and no animals needed to be euthanized in this study.

NOTE: At 24 h after the 15 consecutive days of treatment, subject the mice in the four groups to the MWM test. Conduct the visible platform trial, hidden platform trial, probe trial, and reversal trial in order.

The time axis diagram of this protocol is shown in Figure 1.

Figure 1: Time axis diagram of the study protocol. Please click here to view a larger version of this figure.

The time axis shows that this experiment lasted for a total of 21 days. The treatment was applied to the mouse during the whole experiment and the MWM tests began after 15 days of treatment. The visible platform, hidden platform, probe, and reversal trials were conducted in order. 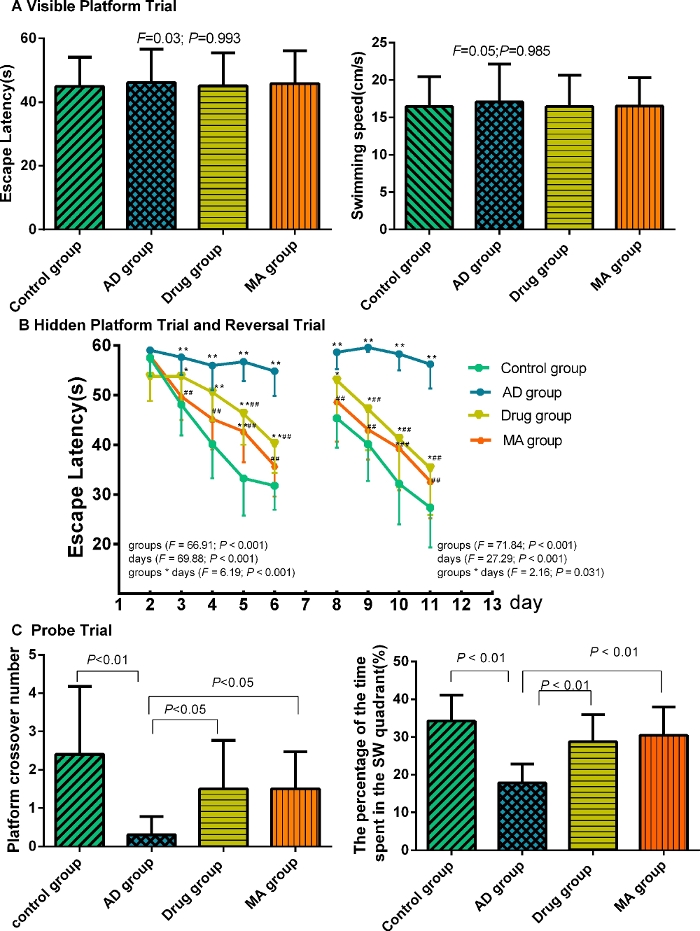 Figure 2: Typical results of the Morris water maze test (n = 10). (A) Changes in the escape latency and swimming speed of rats among the different groups in the visible platform trial. (B) Changes in the escape latency of rats among the different groups in the hidden platform and reversal trials. The p-values are *p < 0.05 and **p < 0.01 compared with the control group. The symbol ## indicates p < 0.01 compared with the AD group. (C) Changes in the platform crossover number and the percentage of the time spent by the rats in the northwest quadrant among the different experimental groups in the probe trial. The results of the visible platform, hidden platform, and reversal trial in each group are shown (n = 10, mean ± SD). This figure has been modified from Ding et al5. Please click here to view a larger version of this figure.

Although many water mazes, including the Biel water maze and the Cincinnati water maze, have been around for at least a century, only the MWM has been widely used to effectively and objectively evaluate spatial learning and memory ability because it has many advantages9. Despite extensive use of the MWM, the procedure has not always been used optimally. MWM experiments generally take a long time and are influenced by many variable factors. There are some effective and reliable aspects that help detect changes in spatial learning and memory ability that should be taken into consideration.

There are no specific standards for the dimensions of the pool and platform1. A 214-cm diameter pool is used in most MWM studies. Vorhees and Williams demonstrated that with identical protocols, rats learn faster in a 122-cm pool than in a 210-cm pool; the steep slope of the learning curve indicates that the 122-cm diameter pool is extremely easy for rats to navigate12. In the current protocol, considering the old age and weak stature of the AD mice, a 90-cm diameter pool and 9.5-cm diameter platform were used. The results of preliminary experiments indicated that mice had more difficulty finding the platform in a bigger diameter pool. Therefore, tests in larger pools do not represent the real difference among the groups. The experimental animals had a harder time finding the platform in a bigger pool with a smaller platform4. Therefore, the size of the pool and the platform must be optimized in preliminary experiments according to the experimental requirements and condition of the experimental animals.

Water at temperature ranging from 20–24 °C is recommended for performing the MWM test4. Aged experimental animals performed poorly in cold water13, indicating a clear age-dependent loss of thermoregulation14. In this study, a thermostat was placed at the bottom of the pool to maintain the temperature of the water at 20–24 °C. The study results showed no significant difference in the swimming speeds among the four groups5.

MWM is a powerful technique to assess cognitive function and is widely used in studies presently. However, there is no defined, standard, consistent equipment to perform the MWM test, including the sizes of the pool and platform15,16. Different laboratories have different specifications for MWM. Therefore, researchers choose the appropriate experimental device according to their individual experimental requirements, which may cause confusion among researchers. Preliminary experiments are also necessary. More studies need to be conducted on basic experiments like MWM. Presently, the flexibility of MWM as an experimental tool only lies in the ability to choose the basic protocols according to the study purposed. Therefore, this test can be applied to assess cognitive function in greater depth.

The authors declare no potential conflict of interest.

Huiling Tian and Ning Ding are co-first authors. Zhigang Li and Jing Jiang are co-corresponding authors. This research was supported by grants from the National Natural Science Foundation of China (Grant Nos. 81804178, 81473774, and 81503654). The protocol and results described herein originates from the article, “Involvement of Manual Acupuncture Regulates Behavior and Cerebral Blood Flow in the SAMP8 Mouse Model of Alzheimer’s Disease” by Dr. Ning Ding et al.