We present a protocol for the isolation of endocardial and coronary endothelial cells from rat hearts through sequential tissue digestion in a digestion buffer, cell collection from recurrent centrifuge cycles, and cell purification using anti-rat CD31 microbeads.

It has been shown that endocardial endothelial cells (EECs) and coronary endothelial cells (CECs) differ in origin, development, markers, and functions. Consequently, these two cell populations play unique roles in cardiac diseases. Current studies involving isolated endothelial cells investigate cell populations consisting of both EECs and CECs. This protocol outlines a method to independently isolate these two cell populations for cell-specific characterization. Following the collection of the left and right ventricular free wall, endothelial cells from the outer surface and inner surface are separately liberated using a digestion buffer solution. The sequential digestion of the outer surface and the inner endocardial layer retained separation of the two endothelial cell populations. The separate isolation of EECs and CECs is further verified through the identification of markers specific to each population. Based on previously published single cell RNA profiling in the mouse heart, the Npr3, Hapln1, and Cdh11 gene expression is unique to EECs; while Fabp4, Mgll, and Cd36 gene expression is unique to CECs. qPCR data revealed enriched expression of these characteristic markers in their respective samples, indicating successful EEC and CEC isolation, as well as maintenance of cell phenotype, enabling further cell-specific functional analysis.

This article provides a detailed protocol (modified from Gladka et al.1) for the dissection and subsequent isolation of endocardial endothelial cells (EECs) and coronary endothelial cells (CECs) from rat hearts. The ability to investigate these cell populations independently would enable the exploration of cell type-specific mechanisms underlying a variety of heart diseases that could serve as potential therapeutic targets. A successful method for the collection of these cell populations independently has yet to be published, however.

CECs differ from EECs in regards to their origin, markers, and functions during heart development and disease1,2,3,4,5,6,7. EECs stem from the ventral surface of the cardiac mesoderm3. They arise from Flk1+ progenitor cells in response to VEGF and HIF signaling and form the innermost layer of the three discrete regions of the developing heart: the atrium, ventricle, and sinus venosus3,6. Genetic lineage tracing suggests that the pluripotent endocardial cells of the sinus venosus derive venous cells, which migrate to form the subepicardial layer3. Subsequently, the subepicardial layer differentiates into coronary arteries and veins, including CECs, which remain across the peripheral ventricular free wall3,4. This endocardial to endothelial pathway is regulated by VEGFC, ELA/APJ, and SOX17 signaling3,4,6,8,9. The ventricular endocardium derives the fewer CECs of the interventricular septum by an unknown mechanism3. Subsequently, localized differentiation between EECs and CECs is suggested by markers specific to these two cell populations, including Mgll, Fabp4, and Cd36 expression in CECs, or Npr3, Cdh11, and Hapln1 expression in EECs3,5,10.

Successful isolation of EECs and CECs is necessary to achieve comprehensive knowledge of these two cell populations, which could be utilized in both the research and clinical settings. Determining the growth and differentiation factors of these cell populations would provide a reference for the differentiation of endothelial subtypes from induced pluripotent stem cells (iPSCs). Further, complete identification of the variances in the development, regulation, and function of EECs and CECs is vital for understanding the genomic and epigenomic factors responsible for numerous heart diseases in a cell type-specific manner. This article outlines steps for the successful collection of EECs and CECs independently, and provides evidence of separation by assessing the gene expression levels of cell type-specific markers.

All animal procedures were approved by the Administrative Panel on Laboratory Animal Care (APLAC31608) at Stanford University.

The process of EEC and CEC isolation is described in Figure 2. The successful isolation of EECs and CECs was determined by assessing the presence of pan-endothelial cell markers, as well as those distinct to the two subtype populations. As predicted, qPCR revealed that relative to β-actin, EECs expressed higher levels of endocardial markers Npr3, Hapln1, and Cdh11 compared to CECs (Figure 3A). Likewise, CECs expressed higher levels of coronary markers Fabp4, Mgll, and Cd36 compared to EECs (Figure 3B). Additionally, both EECs and CECs expressed the pan-EC marker gene Cdh5, with slightly higher levels in CEC (Figure 3C). 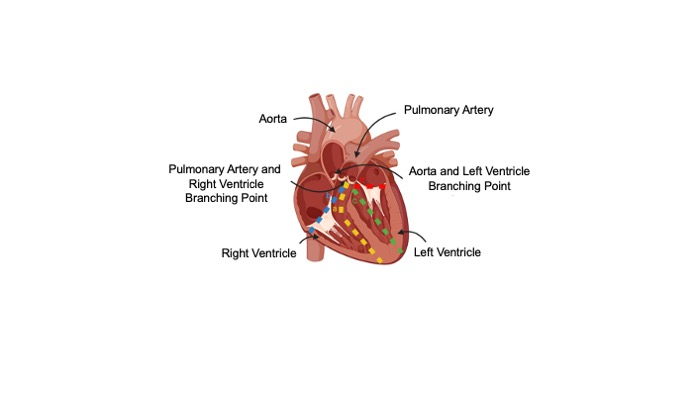 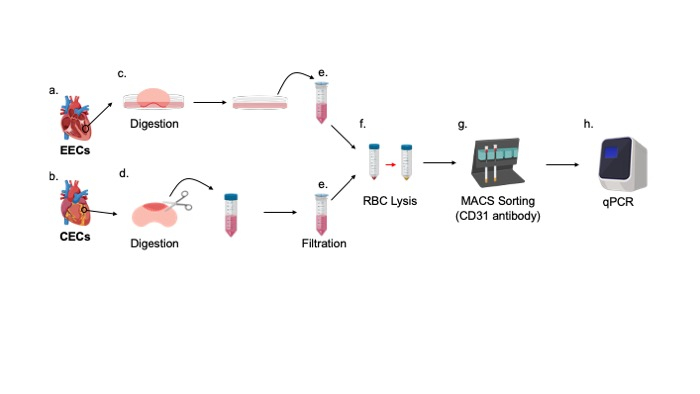 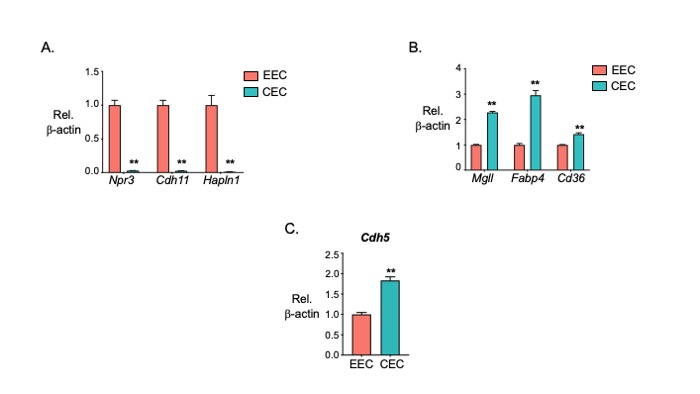 Table 1: Recipe for the digestion buffer.

CECs and EECs differ in origin, markers, and functions, and thus could play unique roles in development and disease. Existing protocols for endothelial cell isolation are limited to macrovascular tissues, neglecting the collection of EECs, thus restricting the study of CEC- and EEC-specific functions. It is essential to isolate and study these two populations independently, as this knowledge would provide a reference for the differentiation of iPSCs into CECs and EECs for future studies and facilitate the examination of these cell populations for potential therapeutic targets for various cardiac diseases. This novel protocol outlines a method for the isolation of EECs from the inner surface and CECs from the outer surface of the ventricular free wall of adult rats.

It is critical to control the timing for each step very precisely in this protocol. Because the number of EECs is very limited in rat heart tissue, we minimized the digestion time of the inner layer of the heart to prevent cellular damage and more importantly, CEC contamination. Immediate addition of the EC medium solution to terminate the enzymatic reaction is also very important for maintaining high cell viability. A red pellet following cell collection suggests the presence of a large number of RBCs. Depending on the amount of RBC contamination, 1–2 mL of RBC lysis buffer can be added to degrade the RBCs. Incubation must be carefully timed to avoid significant damage to the cells, and PBS is promptly added to terminate the reaction. Using the current protocol, we were able to isolate 105 EECs from six rat hearts. These cells could be seeded onto a cell culture dish for further expansion and characterization.

When preparing the tissue for free wall collection, the heart was washed with HBSS to remove the majority of the remaining RBCs. HBSS is the recommended medium due to its clear appearance, which enables the visualization of blood cells, in contrast to DMED containing phenol red. The composition of the digestion buffer ensures sufficient liberation of endothelial cells, where liberase digestion enzyme strips the tissue of the exposed cells, DNase I eliminates DNA from the dead cells to promote cell detachment that may be inhibited by DNA’s adhesive quality, HEPES buffer balances the pH, and DMEM is a modified basal medium with a higher concentration of amino acids and vitamins for better cell maintenance and contains the calcium necessary to activate the liberase.

According to the single cell RNA sequencing (scRNA-seq) obtained from both human15 and mouse heart10, several markers attributed to specific EC populations were reported. We selected some of the most enriched genes to examine the purity of isolated EECs (i.e., Npr3, Cdh11, and Hapln1) and EECs (i.e., Mgll, Fabp4, and Cd36). Relative to β-Actin, Npr3, Cdh11, and Hapln1 markers demonstrated increased expression in EECs compared to CECs. Similarly, the expression of Mgll, Fabp4, and Cd36 markers was greater in CECs compared to EECs. The uniquely expressed markers for each sample is in accord with markers characteristic to EECs and CECs respectively, indicating successful isolation.

However, the current protocol cannot rule out cross contamination between the two EC populations during the isolation, even with carefully controlled sequential digestions. Therefore, some cell surface markers can be applied for further purification. For example, NPR3 generally labels the endocardium10, whereas APJ can trace a majority of the CECs16. Because these two markers are expressed on the cell surface, they could be used for fluorescence activated cell sorting (FACS), and antibodies used to further purify distinct EC populations. In addition, human15 and mouse10 heart scRNA-seq can confirm enrichment of Npr3 in EECs, and Cd36 can be potentially used for CEC purification.

In conclusion, the presented protocol outlines the independent isolation of EECs and CECs from the rat heart. The comprehensive identification of cellular properties, enabled by cell isolation, can be utilized for significant downstream applications.

The authors greatly appreciate Dr. Lingli Wang for her help with the animal protocol, and the Department of Pediatrics at Stanford for infrastructure support. This work was supported by NIH/NHLBI K99 HL135258 (to M.G.).