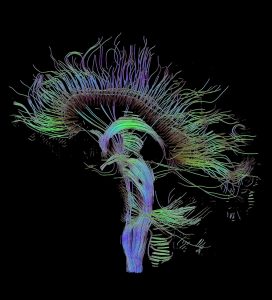 There are various classical techniques that have been utilized to image the structure and function of the human nervous system, most commonly positron emission tomography (PET) and magnetic resonance imaging (MRI).  While there have been great leaps forward in recent decades in the sensitivity and mathematical processing used for these techniques, they still remain fundamentally unchanged.  Given the increasing aging population at risk for neurodegenerative diseases such as Alzheimer’s disease, there is a great demand for the development of novel neuroimaging techniques.

One recently developed technique is diffusion tensor imaging (DTI), which can reveal subtle micro-anatomical abnormalities present in a variety of neurodegenerative diseases.  This technique creates in vivo measurements of the architecture and a color-coded cartography of axonal bundles.  This is accomplished by applying a diffusion gradient along parallel bundles of axons.

This technique is described in detail by Muller, et al in their 2013 JoVE publication entitled: “Diffusion Tensor Magnetic Resonance Imaging in the Analysis of Neurodegenerative Diseases.”

Another breakthrough in neuroimaging is a variant of PET imaging that is coupled with the clinical administration of a tracer that binds to various molecules in the brain such as glucose, to track metabolic processes, and amyloid plaques, one of the key molecules used for diagnosing Alzheimer’s disease.  This technique can be used as both an in vivo diagnostic and in studies to determine which areas of the brain are involved in the etiology of Alzheimer’s and various other diseases.  Prior to the development of this technique, a post-mortem exam would be the only way to obtain this data.

This technique is described in detail by Roy, et al in their 2013 JoVE publication entitled: “A Dual Tracer PET-MRI Protocol for the Quantitative Measure of Regional Brain Energy Substrates Uptake in the Rat.” 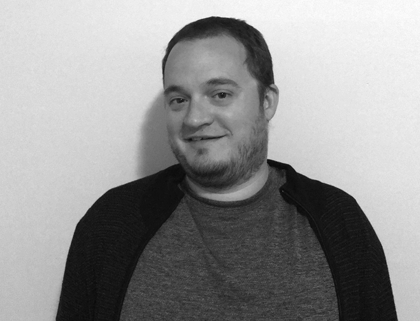