Functional MRI is used to study the effects of acupuncture on the BOLD response and the functional connectivity of the human brain. Results demonstrate that acupuncture mobilizes a limbic-paralimbic-neocortical network and its anti-correlated sensorimotor/paralimbic network at multiple levels of the brain and that the hemodynamic response is influenced by the psychophysical response. Physiological monitoring may be performed to explore the peripheral response of the autonomic nerve function. This video describes the studies performed at LI4 (hegu), ST36 (zusanli) and LV3 (taichong), classical acupoints that are commonly used for modulatory and pain-reducing actions. Some issues that require attention in the applications of fMRI to acupuncture investigation are noted.

Healthy adult volunteers are recruited for the study according to Institutional Review Board approved procedures. Informed consent by the subject is signed before beginning the study.

The AD Instruments PowerLab system allows for physiological data to be synchronized with the fMRI scan by using the fMRI trigger signal recorded on an input channel. This is a laptop based system with inputs for ECG, respiration, skin conductance response, pulse oximetry, and any other physiological signal that would need to be recorded.

Of the two forms of treatment (manual needle manipulation and electric stimulation), this video will be limited to manual acupuncture, which has a much longer history of clinical use. Acupuncture stimulation is administered in duplicate runs to classical acupoints LI4 on the hand, LV3 on the foot or ST36 on the leg, employing sterile, one-time use only acupuncture needles. 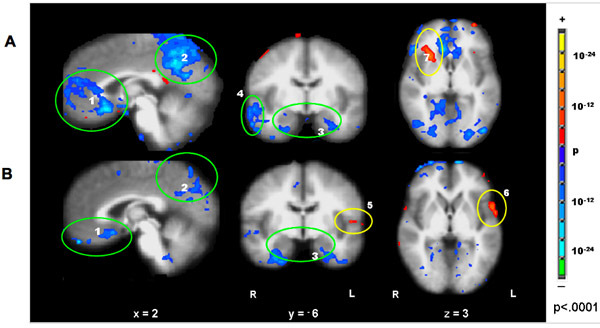 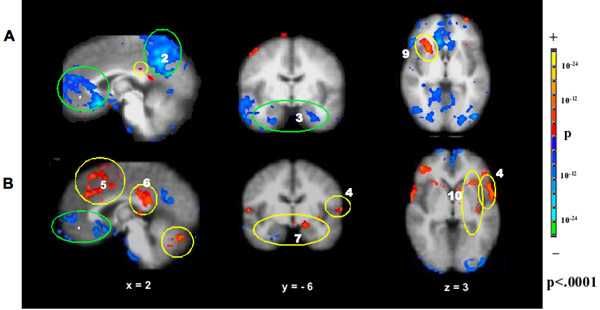 Figure 3. Hemodynamic response in deqi (52 runs/37 subjects) versus deqi mixed with sharp pain (52 runs/29 subjects) during acupuncture stimulation at right LI4, ST36 and LV3, The prominent deactivation of the MPFC (1), MPC (2) and MTL (3) seen with deqi absent pain (Fig A) was attenuated in the presence of pain (Fig B). With pain, activation of the sensorimotor and association cortices (4) became more prominent, and a subset of the limbic and paralimbic regions such as the midC/SMA (5), postC_BA23 (6), Amy (7), and cerebellar vermis (8) became activated. The right anterior insula (9) was markedly activated in deqi while smaller areas of anterior and posterior insula (10) were activated bilaterally in pain. P<0.0001.

Figure 4. Overlap of limbic-paralimbic-neocortical network (LPNN) in acupuncture with the default mode network (DMN); The BOLD response of the LPNN by GLM analysis (Fig.A) and by model-free Fuzzy Cluster analysis (Fig B) during acupuncture stimulation at LI4, ST36 and LV3 show virtually identical patterns with the DMN (Fig.C, adapted from Shulman et al, 1997). Clusters of regions with coherent signal decreases appear in the medial prefrontal cortex (1), postero-medial cortex (2) and temporal lobe (3). p<0.0001.

The employment of proper techniques, the experience of the acupuncturist and a large sample size to permit separation from confounding effects of inadvertent noxious stimulation are important in the acquisition and interpretation of acupuncture fMRI data. Our studies of several classical acupoints indicate that acupuncture modulates the limbic network, an important intrinsic regulatory system of the human brain. The network shows significant overlap with the default mode of the resting brain. These associated autonomic nervous function changes can be demonstrated by physiological monitoring. 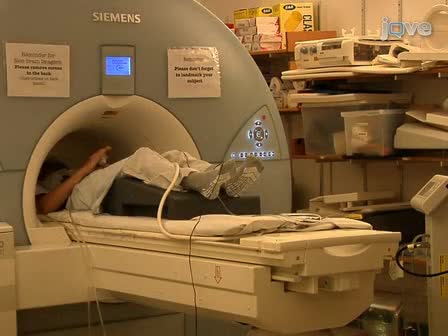