Reduced/absent expression of Pms2 and/or ERCC1 in entire crypts is a frequent event within 10 cm on each side of colonic adenocarcinomas, likely the basis of a field defect with high mutability and progression to cancer. Deficiency in Ku86 or CcOI is much less frequent in these field defects.

In carcinogenesis, the "field defect" is recognized clinically because of the high propensity of survivors of certain cancers to develop other malignancies of the same tissue type, often in a nearby location. Such field defects have been indicated in colon cancer. The molecular abnormalities that are responsible for a field defect in the colon should be detectable at high frequency in the histologically normal tissue surrounding a colonic adenocarcinoma or surrounding an adenoma with advanced neoplasia (well on the way to a colon cancer), but at low frequency in the colonic mucosa from patients without colonic neoplasia.

DNA repair gene Ku86 (active in DNA non-homologous end joining) and Cytochrome c Oxidase Subunit I (involved in apoptosis) had each been reported to be decreased in expression in mucosal areas close to colon cancers. However, immunohistochemical evaluation of their levels of expression showed only low to modest frequencies of crypts to be deficient in their expression in a field defect surrounding colon cancer or surrounding advanced colonic neoplasia.

We show, here, our method of evaluation of crypts for expression of ERCC1, Pms2, Ku86 and CcOI. We show that frequency of entire crypts deficient for Pms2 and ERCC1 is often as great as 70% to 95% in 20 cm long areas surrounding a colonic neoplasia, while frequency of crypts deficient in Ku86 has a median value of 2% and frequency of crypts deficient in CcOI has a median value of 16% in these areas. The entire colon is 150 cm long (about 5 feet) and has about 10 million crypts in its mucosal layer. The defect in Pms2 and ERCC1 surrounding a colon cancer thus may include 1 million crypts. It is from a defective crypt that colon cancer arises.

Preparing tissues to be viewed on slides

Figure 1. A colonic crypt showing high expression of ERCC1 in the nuclei of crypt cells. All colors in this image were equally enhanced in contrast and saturation, using Paint Shop Pro 5. 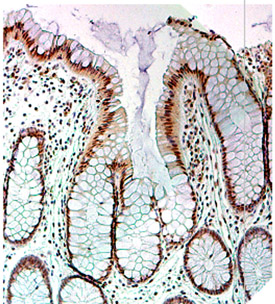 We found a high frequency of crypts deficient in DNA repair genes ERCC1 and Pms2 (Pms2 is also required for apoptosis) in large field defects surrounding colon cancers. Deficiencies in ERCC1 and Pms2 (due to epigenetic changes or mutations) may be early steps in the genetic instability central to progression to colon cancer. 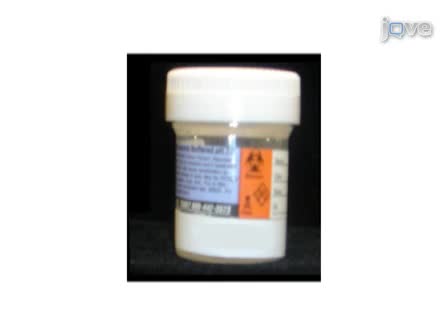