This protocol describes a method for micron-scale three-dimensional imaging of oxygen concentration in the immediate environment of live cells by electron spin resonance microscopy.

This protocol describes an electron spin resonance (ESR) micro-imaging method for three-dimensional mapping of oxygen levels in the immediate environment of live cells with micron-scale resolution1. Oxygen is one of the most important molecules in the cycle of life. It serves as the terminal electron acceptor of oxidative phosphorylation in the mitochondria and is used in the production of reactive oxygen species. Measurements of oxygen are important for the study of mitochondrial and metabolic functions, signaling pathways, effects of various stimuli, membrane permeability, and disease differentiation. Oxygen consumption is therefore an informative marker of cellular metabolism, which is broadly applicable to various biological systems from mitochondria to cells to whole organisms. Due to its importance, many methods have been developed for the measurements of oxygen in live systems. Current attempts to provide high-resolution oxygen imaging are based mainly on optical fluorescence and phosphorescence methods that fail to provide satisfactory results as they employ probes with high photo-toxicity and low oxygen sensitivity. ESR, which measures the signal from exogenous paramagnetic probes in the sample, is known to provide very accurate measurements of oxygen concentration. In a typical case, ESR measurements map the probe's lineshape broadening and/or relaxation-time shortening that are linked directly to the local oxygen concentration. (Oxygen is paramagnetic; therefore, when colliding with the exogenous paramagnetic probe, it shortness its relaxation times.) Traditionally, these types of experiments are carried out with low resolution, millimeter-scale ESR for small animals imaging. Here we show how ESR imaging can also be carried out in the micron-scale for the examination of small live samples. ESR micro-imaging is a relatively new methodology that enables the acquisition of spatially-resolved ESR signals with a resolution approaching 1 micron at room temperature2. The main aim of this protocol-paper is to show how this new method, along with newly developed oxygen-sensitive probes, can be applied to the mapping of oxygen levels in small live samples. A spatial resolution of ~30 x 30 x 100 μm is demonstrated, with near-micromolar oxygen concentration sensitivity and sub-femtomole absolute oxygen sensitivity per voxel. The use of ESR micro-imaging for oxygen mapping near cells complements the currently available techniques based on micro-electrodes or fluorescence/phosphorescence. Furthermore, with the proper paramagnetic probe, it will also be readily applicable for intracellular oxygen micro-imaging, a capability which other methods find very difficult to achieve.

First, we provide a brief explanation of ESR, ESR microscopy, and the various components of our system, and then we will describe the actual imaging experiments.

Electron spin resonance is a spectroscopic technique in which electromagnetic radiation at a specific frequency is absorbed by molecules with unpaired electron spins, placed under an external static magnetic field (Figure 1). ESR is employed in broad areas of science, such as chemistry, biology, physics, and materials science, for the detection and identification of free radicals and paramagnetic centers. It is a powerful method for studying the environment of paramagnetic molecules in live species and provides information about acidity (pH), viscosity, oxygen, and reactive oxygen species concentrations3.

For heterogeneous samples, ESR spectral information can be obtained in a spatially resolved manner (i.e, by obtaining an image), through the use of magnetic field gradients4. This is very similar to the more common method of magnetic resonance imaging (MRI) that mainly observes proton spins. Up until now, such ESR imaging techniques were applied for live specimens with relatively large size of a few centimeters and in mm-scale resolution. (For example see Figure 2, taken from reference 5.) A relatively recent development in ESR imaging is the extension of its capabilities from looking at small animals at millimeter-scale resolution to the measurements of millimeter- and sub-millimeter-size samples with micron-scale resolution. This field is known as ESR microscopy, which today can provide 3D ESR images with a resolution approaching 1 micron 2 (see representative examples in Figure 3).

An ESR microscope is essentially similar to a conventional ESR spectrometer. It has a magnet for generating the static field, a microwave system for spin excitation and signal detection, a probe for holding the sample, and a computerized console to control the acquisition process and data handling. Other components unique the ESR imaging in general and existing also in ESR microcopy are magnetic field gradient sources, which are part of the electronic system, and gradient coils that are located in the imaging probe. More details about our specific system are shown in the protocol movie and described in reference 2.

This stage describes the method for sample preparation for the ESR micro-imaging experiment. At the end of this stage cells are placed on the bottom of a specially-prepared glass ESR microscopy sample container together with a trityl radical6 buffer solution. This protocol describes the measurement of cyanobacteria cells and therefore, for other types of cells, proper adjustments may be needed at the sample preparation stage.

The outcomes of the experiment are several three-dimensional ESR micro-images recorded at different τ values. Typical raw data images are provided in Figure 5. The top three images, measured under dark conditions, are very similar except for reduction in signal intensity. On the other hand, the image pattern changes under light irradiation due to the different relaxation times in different parts of the sample. This data can be processed1 to obtain an amplitude image, as shown in Figure 6 and also images of the relaxation time, T2 (Figure 7). The T2 images are translated into oxygen concentration values via a pre-existing calibration curve that links the oxygen concentration to the relaxation time via the equation:

Here, T20 is the spin-spin relaxation time of the probe under anoxic conditions (depending on the probe's concentration, C, and its diffusion coefficient, D), and k is a proportionality constant. In most cases, the diffusion coefficient does not vary much for live samples (although, if needed, it can in principle be directly evaluated also by ESR 6, 10), and the spin concentration is obtained during the imaging process. Therefore, this relation can be used to directly measure oxygen concentration.

Going back to Figure 6, it is evident from the amplitude image that the cyanobacteria cells were located mainly on the right side of the sample holder. Furthermore, based on Figure 7, it is clear that light initiates the production of O2 and causes a significant increase in the solution's O2 concentration, mainly in the voxels near the cyanobacteria. 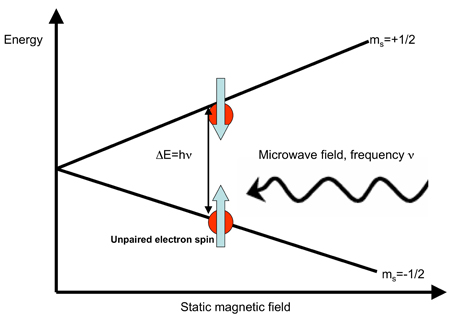 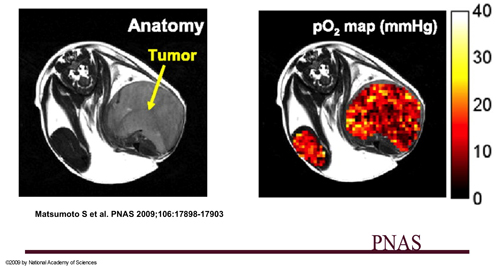 Figure 2: Typical oxygen concentration image of a Tumor bearing mouse. The image on the left shows the anatomical information, based on an MRI image. A stable free organic radical was injected to the mouse and its ESR characteristics provide the oxygen concentration at its environment (right). ESR-based results are superimposed on MRI anatomical image. Field of view is 32 mm. 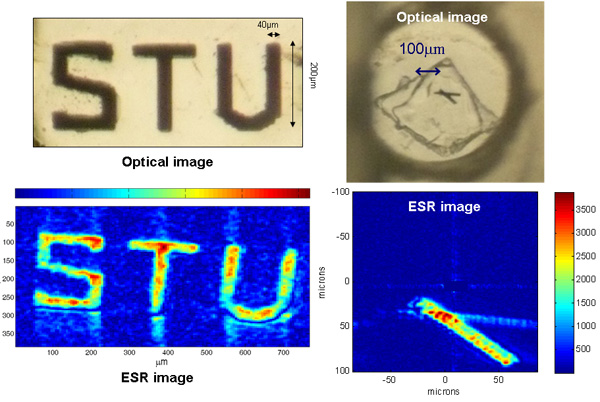 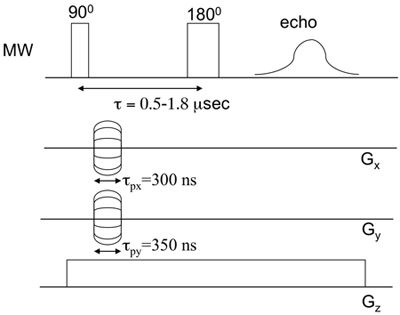 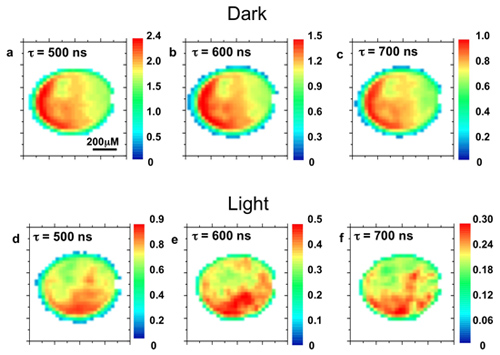 Figure 5: Typical raw-data ESR micro-images: a,b, and c are raw data of the Cyanobacterium sample with no light illumination measured for τ = 500,600,700 ns, respectively. Items d,e, and are the same as a, b, and c but with light illumination. Intensity is plotted in arbitrary scale (but is consistent within each set of three dark or light raw data images) 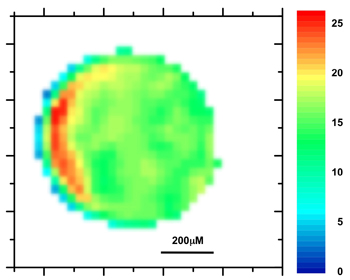 Figure 6: Amplitude image corresponding to the radical concentration in the solution (arbitrary scale).

This protocol shows how ESR micro-imaging can be applied to map oxygen concentration near live small samples. A spatial resolution of ~30 x 30 x 100 μm is demonstrated, with near-micromolar oxygen concentration sensitivity and sub-femtomole absolute oxygen sensitivity per voxel. The use of ESR micro-imaging for oxygen mapping near cells complements the currently available techniques based on micro-electrodes or fluorescence/phosphorescence. Furthermore, with the proper paramagnetic probe, it will be readily applicable for intracellular oxygen micro-imaging, a capability which other methods find very difficult to achieve. In the near future we plan on further improving this methodology to provide live sample images with a resolution of a few microns, providing contrast parameters such as super oxide concentration, acidity (pH), probe diffusion coefficient and, of course, oxygen concentration. These capabilities are complementary to the current optical-based methodologies both in terms of contrast type and also of samples characteristics (e.g non-transparent thick samples and, in some cases, intracellular vs. extracellular measurements). 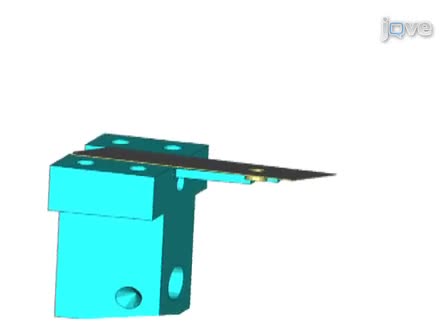