This work shows how to form an RNA/DNA hybrid at the chromosomal level and reveal transfer of genetic information from RNA to genomic DNA in yeast cells.

Synthetic short nucleic acid polymers, oligonucleotides (oligos), are the most functional and widespread tools of molecular biology. Oligos can be produced to contain any desired DNA or RNA sequence and can be prepared to include a wide variety of base and sugar modifications. Moreover, oligos can be designed to mimic specific nucleic acid alterations and thus, can serve as important tools to investigate effects of DNA damage and mechanisms of repair. We found that Thermo Scientific Dharmacon RNA-containing oligos with a length between 50 and 80 nucleotides can be particularly suitable to study, in vivo, functions and consequences of chromosomal RNA/DNA hybrids and of ribonucleotides embedded into DNA. RNA/DNA hybrids can readily form during DNA replication, repair and transcription, however, very little is known about the stability of RNA/DNA hybrids in cells and to which extent these hybrids can affect the genetic integrity of cells. RNA-containing oligos, therefore, represent a perfect vector to introduce ribonucleotides into chromosomal DNA and generate RNA/DNA hybrids of chosen length and base composition. Here we present the protocol for the incorporation of ribonucleotides into the genome of the eukaryotic model system yeast /Saccharomyces cerevisiae/. Yet, our lab has utilized Thermo Scientific Dharmacon RNA-containing oligos to generate RNA/DNA hybrids at the chromosomal level in different cell systems, from bacteria to human cells.

Exploiting the use of Thermo Scientific Dharmacon oligos, 50 to 80-mers, here we present a procedure, based on a gene correction assay, by which oligos can transfer genetic information to genomic DNA of yeast cells, following annealing to the target chromosomal DNA. Successful targeting by oligos is scored by the appearance of yeast colonies displaying the expected phenotype. If the desired genetic modification is carried within one or more ribonucleotides incorporated in the oligo sequence, the genetic information flows directly from the RNA tract to the chromosomal target DNA, thus, an RNA/DNA hybrid forms at the chromosomal level during the targeting process. The ribonucleotide/s of a Thermo Scientific Dharmacon RNA-containing oligo can serve as template for gene targeting via DNA repair synthesis or can be embedded into the DNA and serve as template during DNA replication. In these experiments we use the yeast /Saccharomyces cerevisiae/ eukaryotic model system; however, a similar approach can also be applied in other organisms or cell types. In this video, we use a Thermo Scientific Dharmacon oligo designed with homology to a target yeast genomic locus and containing one ribonucleotide in the middle to correct a mutation in the target gene. After transformation with the RNA-containing oligo, we observe the correction of the targeted site at a certain frequency, which indicates that the RNA tract of the oligo could be incorporated into the chromosomal DNA and serve as template for DNA synthesis during DNA replication. The genetic information carried within the RNA tract is stably transmitted to the following cell generations. Here we describe the steps of yeast cell transformation by the Thermo Scientific Dharmacon RNA-containing oligo and the approach to detect the RNA information transferring into chromosomal DNA.

A. Design of the RNA-containing Oligo used in this Experiment

We have designed an RNA-containing oligo to correct a genetic defect in the yeast S. cerevisiae chromosomal DNA at the trp5 locus. The yeast strain used in the protocol contains a mutant trp5 gene with a two-base deletion and one nonsense mutation (Figure 1A). Such yeast strain is a tryptophan auxotrophic mutant and does not form colonies on media without tryptophan. The DNA sequence of the TRP5 gene is available at the Saccharomyces Genome Database (http://www.yeastgenome.org/). The Thermo Scientific Dharmacon RNA-containing oligo used in this protocol is a 65-mer with a 2-base DNA insertion, designed to correct the deletion mutation and one ribonucleotide designed to correct the nonsense mutation of the trp5 allele (Figure 1A). The sequence of the oligo is designed as follows:
5'-AAAAGGGTTTTGATGAAGCTGTCG-CG-GATCCCACATTCTG-rG-GAAGACTTCAAATCCTTGTATTCT. This oligo is synthesized by Thermo Scientific Dharmacon (Lafayette, CO) at 200 nM scale, and is desalted, deprotected and used without PAGE purification.

B. Preparation of the RNA-containing Oligo for Yeast Transformation (modified from Storici et al., 2007 1)

D. Analysis of Gene Correction by the RNA-containing Oligo 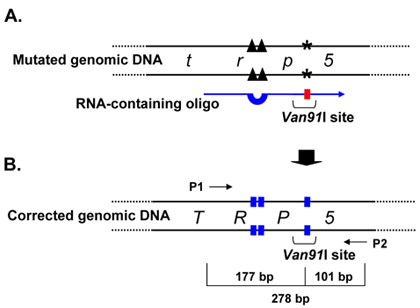 Figure 1. Schematic diagram of the defective trp5 gene and of the TRP5 allele corrected by the RNA-containing oligo. A) The trp5 mutant gene contains a 2-base deletion (black triangles) and 1-base nonsense mutation (asterisk). The single-strand RNA-containing oligo with 2-base insertion (blue loop) and 1-RNA base substitution (red rectangle) generating a Van91I restriction enzyme site (shown by the bracket) is transformed into yeast cells to correct the genetic defects of the trp5 gene. B) After the TRP5 gene is repaired by the RNA-containing oligo (corrected bases are indicated as blue rectangles), the Van91I site is generated into the TRP5 gene. A 278 bp fragment including only one Van91I restriction site in TRP5 gene is PCR amplified by a pair of primers (P1 and P2). The 177 bp and 101 bp fragments generated after digestion of the P1 and P2 PCR product by Van91I are also shown. 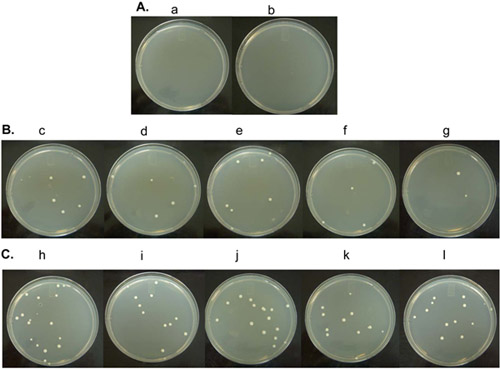 Figure 3. Detection of genetic information transfer from the RNA-containing oligo to yeast chromosomal DNA by restriction digestion of the PCR product amplifying the targeted genomic region. 2% agarose gel electrophoresis of PCR samples amplified by P1 and P2 and digested with Van91I restriction enzyme. Lanes 1, 8 and 15, DNA ladder with sizes of 100, 200, 300, 400 and 500 bp indicated on the left; lane 2, PCR product of trp5 locus amplified from the genomic DNA of the trp5 mutant strain; lane 3, PCR product amplified from genomic DNA derived from a Trp+ colony targeted by the DNA-only oligo; lane 4-7, PCR products amplified from genomic DNA derived from Trp+ colonies targeted by the RNA-containing oligo; lane 9 to 14, Van91I restriction digestion of the PCR products from lanes 2 to 7. The presence of the uncut PCR product bands in lanes 10 to 14 can be explained by partial digestion by Van91I at the TRP5 locus (CCACATTCTGG). Considering that the cutting site for Van91I (CCANNNN NTGG) can have multiple sequences, the site generated in TRP5 may not be the most optimal target for the enzyme. In fact, following DNA sequencing of all the above PCR products we detect no additional changes beyond those carried by the oligos (see Figure 4). The 278 bp PCR band amplified by P1 and P2 primers and the digestion product bands by Van91I of 177 bp and 101 bp are shown by the arrows on the right. 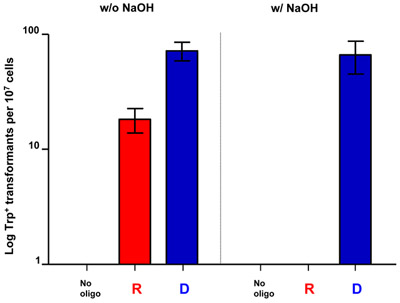 The fact that RNA can transfer genetic information directly to genomic DNA in cells was discovered exploiting the use of synthetic RNA-containing oligos (Dharmacon synthesized oligos) 1. It was the proof of principle that cells can use RNA-containing molecules or RNA-only sequences as templates for DNA synthesis. The use of RNA-containing oligos not only led to the demonstration that genetic information can be transferred directly from RNA to genomic DNA without the need of a reverse transcribed DNA copy intermediate, but also to the proof that RNA can be used as homologous template in the repair of a DNA damage 1,3. The oligos can be made of RNA-only or contain just a single ribonucleotide embedded in a DNA sequence, as in the example we presented here. The RNA-containing oligo has one embedded ribonucleotide designed to correct the nonsense mutation in the genomic defective trp5 allele. The transfer of genetic information from the ribonucleotide to the genomic DNA is revealed by a change in phenotype (cell growing on the medium lacking tryptophan) of the targeted cells. The frequency of gene correction obtained with the RNA-containing oligo is measured and compared with that of a control DNA-only oligo. By performing this gene correction assay in different cell backgrounds, where we mutate various yeast genes, we can detect which factor/s specifically affect targeting by the RNA-containing oligos. Thus, we can reveal mechanisms how cells regulate the stability of RNA/DNA hybrids. By simply designing different variants of the RNA-containing oligos we can determine the likelihood for a particular RNA tract to serve as template in DNA modification and we can determine the stability of specific RNA sequences embedded into DNA. Moreover, we can identify what are the preferred in vivo substrates for factors interacting with RNA/DNA hybrids.

In conclusion, targeting cells by RNA-containing oligos provides the opportunity to generate RNA/DNA hybrids and ribonucleotides embedded in DNA in vivo in cells. The stability, function and consequences of these in vivo generated RNA/DNA hybrids can be analyzed and characterized, potentially uncovering unknown mechanisms of DNA repair and revealing novel strategies for gene targeting.

The video production for this article was sponsored by Thermo Fisher Scientific, which produces reagents and instrument used in this publication.

This work was supported by the Georgia Cancer Coalition grant-R9028. 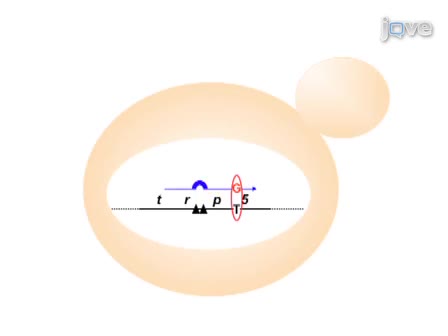