Screening for mutants with phenotypic defects is a straightforward method for identifying genes that function in a given biological process. In this article we describe how to culture free living worms (e.g., Pristionchus pacificus) in the laboratory and show two different mutagenesis methods, EMS and TMP/UV.

This protocol describes procedures to maintain nematodes in the laboratory and how to mutagenize them using two alternative methods: ethyl methane sulfonate (EMS) and 4, 5', 8-trimethylpsoralen combined with ultraviolet light (TMP/UV). Nematodes are powerful biological systems for genetics studies because of their simple body plan and mating system, which is composed of self-fertilizing hermaphrodites and males that can generate hundreds of progeny per animal. Nematodes are maintained in agar plates containing a lawn of bacteria and can be easily transferred from one plate to another using a pick. EMS is an alkylating agent commonly used to induce point mutations and small deletions, while TMP/UV mainly induces deletions. Depending on the species of nematode being used, concentrations of EMS and TMP will have to be optimized. To isolate recessive mutations of the nematode Pristionchus pacificus, animals of the F2 generation were visually screened for phenotypes. To illustrate these methods, we mutagenized worms and looked for Uncoordinated (Unc), Dumpy (Dpy) and Transformer (Tra) mutants.

Experimental nematodes such as C. elegans and P. pacificus are typically cultured in the laboratory on 6 cm Petri plates containing Nematode Growth Medium (NGM) 1. Worms are kept at 20°C, but can be incubated at a range of temperatures (between 4°C - 25°C), depending on the nematode species and experimental design. To prepare plates with NGM, standard sterile techniques have to be used to prevent fungal and bacterial contamination. Following is the protocol to prepare NGM plates:

P. pacificus is cultured in the laboratory by feeding on the E.coli OP50 strain. OP50 has a limited growth on NGM plates, thereby forming a thin lawn that facilitates the visualization of the worms1. To grow a culture of OP50, use LB-broth:

In this section we describe how to make a pick for worms. The pick is used to transfer worms from one location to another. The pick is made of 30 gauge 90% platinum 10% iridium wire, though some researchers may prefer slightly different metal compositions:

Ethyl methane sulfonate (EMS) induces a broad spectrum of mutations in the in the genome 2. Mutants can be identified by defects like egg laying, muscle defects, sex determination, dauer formation, behavior, and gonad formation. The protocol for EMS mutagenesis is similar to that described for C. elegans 1.

In this section we describe the procedure for mutagenesis using TMP in conjunction with long wavelength ultraviolet (UV). TMP/UV method of mutagenesis is widely used to induce deletion mutations within a genome 3.

Some of the P. pacificus mutant phenotypes resulting from the mutagenesis (either by EMS or TMP/UV) are shown in Figure 1. Each mutant has a characteristic phenotype that is easily distinguishable from the wild type animal. From the worms that were treated with the mutagen, 30 J3/J4 larvae from the parental generation (P0) were placed in separate plates and allowed to lay eggs, which are the F1 generation. From the plates that showed healthy F1 progeny, a total of 1000 F1s were transferred on to individual plates and the F2 progeny was screened for phenotypes. Animals with Dumpy 5,6, Uncoordinated6 and Transformer7 phenotypes were found. 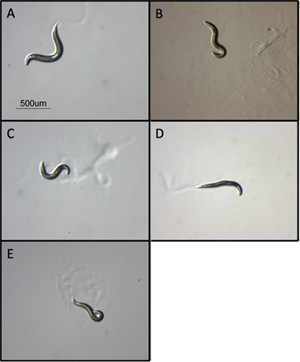 Mutagenesis is a widely employed technique for genetic studies in various experimental model organisms. Mutagenesis experiments are often used to identify the function of a gene2. The mutagenesis procedures described here can be used not only for P. pacificus, but also for C. elegans and other related nematode species. Here we describe two methods, EMS and TMP/UV mutagenesis.

EMS is a chemical that induces point mutations or small deletions throughout the genome3,8. Psoralen mutagenesis (TMP/UV) mostly induces deletion mutations in the DNA due to possible breakage induced by the UV light. The deletion fragments are typically in the range of 0.10 to 15 kb in length 3.

We screened for phenotypes that are relatively common to find. In a screen using EMS, for each 400 plates with F2 animals, about one plate had a Dpy, Unc or Tra. Dpy can be recognized by its shorter size7, Unc for its abnormal movement6 and Tra for having a male phenotype and an XX karyotype7. TMP/UV mutagenesis has a lower frequency of generating mutants compared to EMS 3, but it generates bigger deletions.

For nematodes, the late fourth stage larva or young adult is the most effective developmental stage to carry out mutagenesis because they have the maximum number of germ line nuclei. It is therefore useful to start the experiment with a synchronized parental population with many fourth stage larvae. A simple way of making synchronized cultures is by making new cultures with eggs instead of adult worms. In the following generation, most worms will be about the same age. Recessive mutations can be detected by inspecting the progeny of F1 individuals, which will produce about twenty five percent of homozygous.

The power of genetic screens in nematodes can be further exploited by modifying the design of the screen9. The combination of hermaphroditic lifestyle and rapid generation time makes nematodes ideal for genetics studies. 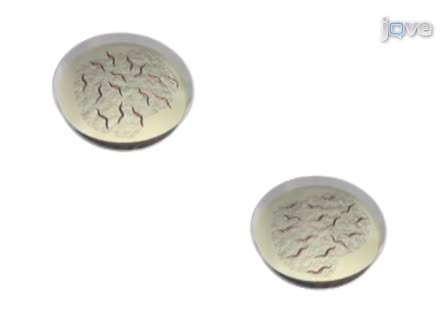