Experimental paradigms are valuable insofar as the timing and other parameters of their stimuli are well specified and controlled, and insofar as they yield data relevant to the cognitive processing that occurs under ecologically valid conditions. These two goals often are at odds, since well controlled stimuli often are too repetitive to sustain subjects' motivation. Studies employing electroencephalography (EEG) are often especially sensitive to this dilemma between ecological validity and experimental control: attaining sufficient signal-to-noise in physiological averages demands large numbers of repeated trials within lengthy recording sessions, limiting the subject pool to individuals with the ability and patience to perform a set task over and over again. This constraint severely limits researchers' ability to investigate younger populations as well as clinical populations associated with heightened anxiety or attentional abnormalities. Even adult, non-clinical subjects may not be able to achieve their typical levels of performance or cognitive engagement: an unmotivated subject for whom an experimental task is little more than a chore is not the same, behaviourally, cognitively, or neurally, as a subject who is intrinsically motivated and engaged with the task. A growing body of literature demonstrates that embedding experiments within video games may provide a way between the horns of this dilemma between experimental control and ecological validity. The narrative of a game provides a more realistic context in which tasks occur, enhancing their ecological validity (Chaytor & Schmitter-Edgecombe, 2003). Moreover, this context provides motivation to complete tasks. In our game, subjects perform various missions to collect resources, fend off pirates, intercept communications or facilitate diplomatic relations. In so doing, they also perform an array of cognitive tasks, including a Posner attention-shifting paradigm (Posner, 1980), a go/no-go test of motor inhibition, a psychophysical motion coherence threshold task, the Embedded Figures Test (Witkin, 1950, 1954) and a theory-of-mind (Wimmer & Perner, 1983) task. The game software automatically registers game stimuli and subjects' actions and responses in a log file, and sends event codes to synchronise with physiological data recorders. Thus the game can be combined with physiological measures such as EEG or fMRI, and with moment-to-moment tracking of gaze. Gaze tracking can verify subjects' compliance with behavioural tasks (e.g. fixation) and overt attention to experimental stimuli, and also physiological arousal as reflected in pupil dilation (Bradley et al., 2008). At great enough sampling frequencies, gaze tracking may also help assess covert attention as reflected in microsaccades - eye movements that are too small to foveate a new object, but are as rapid in onset and have the same relationship between angular distance and peak velocity as do saccades that traverse greater distances. The distribution of directions of microsaccades correlates with the (otherwise) covert direction of attention (Hafed & Clark, 2002).

The results presented here were obtained from pilot data examining children ages 10-15 years in three groups: individuals with an autism spectrum condition (ASC), siblings without any clinical diagnosis (SIB), and typically developing children (TYP). Gaze tracking data have been used to reject trials in which the subject's gaze has deviated from the stimuli of interest. (More intricate applications of gaze data also are possible, for instance using gaze as a parameter in computing physiological and behavioural averages.)

Figure 7 shows an event-related spectral perturbation obtained from a frontal midline electrode (Fz). PresentEnemy is corresponds to the appearance of an enemy ship (Go) and PresentFriendly corresponds to the appearance of a friendly ship (No-Go). During the No-Go condition, the TYP group demonstrated significantly higher gamma power (30-75 hz) 500-1500 ms post-stimulus.

The APT allows for easy comparisons between physiological and psychometric measures. For instance, in our analysis, alpha power (8-12 hz) during a similar time period (300-1500ms post-stimulus) for No-Go trials during this non-social attentional task was negatively correlated with performance on a measure of social perception, the Benton Facial Recognition test (Benton et al., 1994). 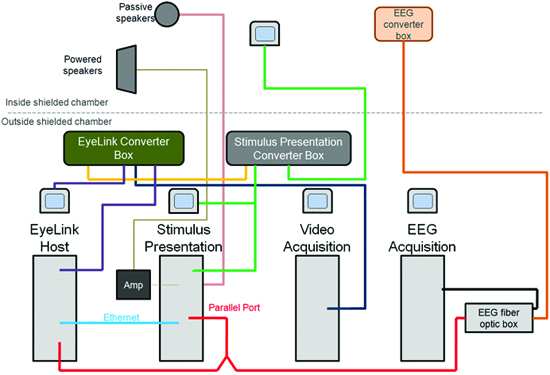 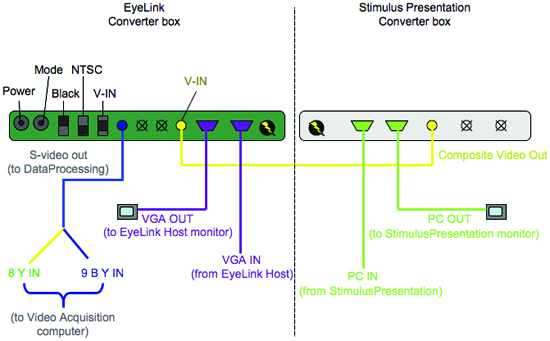 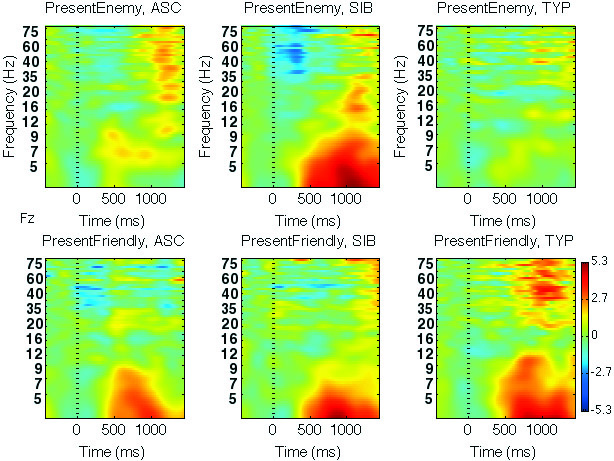 Perhaps the single most important obstacle to integrative studies is the practical limit on the amount of time that a single experimental subject (especially one from a clinical population) can reasonably be expected to perform before becoming fatigued. Unfortunately, often the more controlled a stimulus is from the scientist's point of view, the more repetitive and tedious the experiment can seem from the subject's point of view. Behavioural research on neuropsychiatric disorders in recent years has highlighted the importance of motivation, behavioural set, and task instruction in establishing cognitive strategy and determining performance (e.g. Plaisted et al. 1999; Dalton et al. 2005). In light of these considerations, we have embedded experimental stimuli in the context of a video game that captures and maintains subjects' interest, transparently collecting behavioural data and synchronising with physiological recording as the subject plays the game. The practical advantages of such an engaging and ecologically valid format over the usual repetitive blocks of trials are legion. Indeed, varying levels and demands of attentional shifting and multimodal integration are natural in the context of video game play, and psychophysical measures such as dot motion coherence and embedded figures are easily implemented as, for example, the movement of a star field on a view screen and the detection of an object in a cluttered environment. In addition, the strategic and adversarial nature of a video game carries natural opportunities to explore higher-level cognitive measures such as comprehension of game-related narratives and social attribution to a computer-generated adversary. Video games evoke measurable alterations in attention and perceptual processes (Green & Bavelier 2003, 2006ab, 2007; Castel et al. 2005; Feng et al. 2007), and the video game format is increasingly being used to acquire simultaneous behavioural and EEG observations in ecologically valid contexts, for example in visuomotor tracking (Smith et al. 1999), air traffic control (Brookings et al. 1996), and military command and control simulations (St John et al. 2002, 2004; Berka et al. 2004). Recent results in human-computer interaction (von Ahn 2006) also point to the power of the game context to establish and to maintain motivation in tasks that otherwise might not seem engaging, to teach persons with developmental disorders (Golan & Baron-Cohen 2006), and to train executive functions (Thorell et al., 2009). Also along these lines, the video game format affords subjects more of a chance to become comfortable with the task before entering the laboratory, minimising the potential confound of state anxiety associated with performance of an unfamiliar task in a testing situation.

A new generation of EEG amplifiers capable of matching much higher scalp impedances (Ferree et al., 2001), combined with sensor webs that parallellise the process of electrode placement and electrolyte application, has significantly reduced electrode application time and demands for subject compliance, enabling high-density EEG recording in a wider range of patients. Even more significantly, during the past decade as biologists have begun to communicate better with physicists and mathematicians, outdated univariate methods of analysis in the time domain have been supplanted by multivariate methods such as Independent Components Analysis (Bell & Sejnowski, 1995) and by time-frequency analyses that account not only for signals phase-locked to stimulus or response events but also for signals consisting of perturbations of ongoing oscillations (Makeig et al., 2002, 2004). These practical and analytical developments have opened electroencephalography to a wider range of subject populations and behavioural contexts. With these developments, though, the importance of preserving ecological validity has only grown. Cognitive tasks implemented in the context of a computer game can be more flexibly combined with simultaneous gaze tracking and high-density EEG, and yield data of greater ecological validity. (This is especially true if subjects are given time to familiarise themselves with the game before the recording session. For our study, subjects were loaned laptop computers on which to practise the game at least two weeks prior to EEG recording.) In future, the game paradigm may become the norm in neurophysiological and behavioural research, especially where children or clinical populations are concerned. 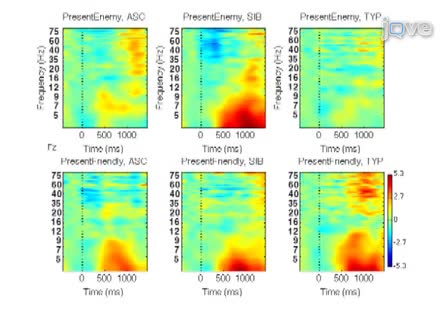