In order to evaluate novel therapeutic paradigms for the treatment of glioma, physiological relevant models are essential. We utilize an implantable guide screw procedure for establishment of intracranial xenograft models that is more rapid and safer than stereotactic approaches.

The grafting of human tumor cells into the brain of immunosuppressed mice is an established method for the study of brain cancers including glioblastoma (glioma) and medulloblastoma. The widely used stereotactic approach only allows for the injection of a single animal at a time, is labor intensive and requires highly specialized equipment. The guide screw method, initially developed by Lal et al.,1 was developed to eliminate cumbersome stereotactic procedures. We now describe a modified guide screw approach that is rapid and exceptionally safe; both of which are critical ethical considerations. Notably, our procedure now incorporates an infusion pump that allows up to 10 animals to be simultaneously injected with tumor cells.

To demonstrate the utility of this procedure, we established human U87MG glioma cells as intracranial xenografts in mice, which were then treated with AMG102; a fully human antibody directed to HGF/scatter factor currently undergoing clinical evaluation2-5. Systemic injection of AMG102 significantly prolonged the survival of all mice with intracranial U87MG xenografts and resulted in a number of complete cures.

This study demonstrates that the guide screw method is an inexpensive, highly reproducible approach for establishing intracranial xenografts. Furthermore, it provides a relevant physiological model for validating novel therapeutic strategies for the treatment of brain cancers.

This procedure can be carried out several days prior to the injection of cells. All procedures described here have been carried out under strict sterile conditions.

Control animals began to show signs of neurological disturbance and weight loss 23 days after the initial inoculation of cells. This was significantly delayed in the AMG102 treated group to 35 days. Indeed by day 35, 77% (n = 7/9) of the control group had been euthanized. The Kaplan-Meier survival curve clearly demonstrates the significant increase in survival in response to AMG102 treatment (Figure 3). By day 70, 88% of control mice had been euthanized (n = 8/9) compared to 37% (n = 3/8) of AMG102 treated group. Histological analysis of the brains confirmed that all 9 animals in the control group developed tumors compared to only 3 of the 8 AMG102 treated mice (Figure 4). 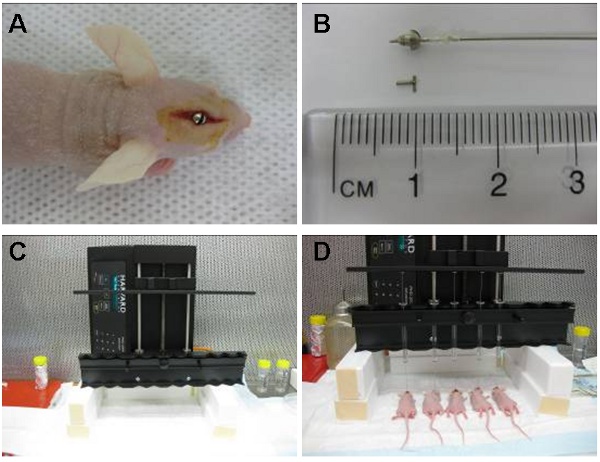 Figure 1: Image (A) shows intracranial guide screw positioned in an area located directly above the caudate nucleus. The cuffed hamilton syringe (pre-loaded with cells) is then placed inside the guide screw so that 2 mm of needle extends beyond the guide and the cells are injected 3.5 mm inside the caudate nucleus. The syringe is later removed and replaced by a stylet (B). The automatic infusion device (C) can inject up to 10 animals at a time. Shown here are five simultaneous injections (D).

Figure 2: Schematic of study protocol. Cells were injected on day 0 with treatment commencing on day 4. Control animals received an injection of PBS (100 μl) IP while the treatment group received an injection of AMG102 (100 μg/100 μl) IP. These injections were given every second day for 10 days. A total of 6 injections were given. Animals were then monitored for 70 days for signs of neurological and physical disturbances. 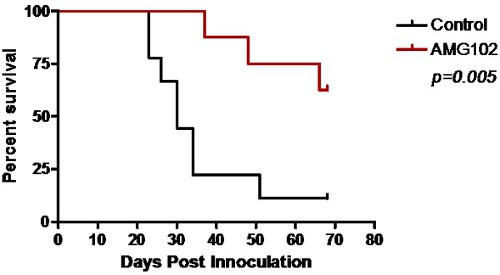 The intracranial guide screw method presented here enables the rapid and reproducible establishment of intracranial xenografts and in the hands of a trained animal technician, this procedure is very easily performed without the need for a stereotactic device. Our method combines the use of a guide screw, to accurately locate the region of brain most suitable for in vivo tumor development, and an automated infusion pump that allows for the simultaneous inoculation of up to 10 animals at a time. The guide screw augmentation procedure takes less than 5 minutes to perform. The automated infusion of cells at 30 μl/hour takes just 10 minutes for a 5 μl volume. This ensures accurate dosing at a constant rate and reduces the risk of cell expulsion into the extra-cranial area due to increased intracranial pressure. We have also performed this procedure with 10 μl volumes and have not observed any extra-cranial tumor growth due to cellular reflux. As the automated infusion pump also allows several animals to be inoculated simultaneously we can inject up to 60 animals per hour compared to a stereotactic procedure which is limited to approximately 15 animals per hour.

The most critical step in this procedure is the location of guide screw in the skull as its position determines the ultimate location of the tumor bulk. If the guide screw is too central, the cells will be injected into a region between the two brain hemispheres whereas if the guide is placed to far forward, the cells will not be injected into the brain at all. It is therefore essential to be as accurate as possible in locating the guide 2.5 mm lateral and 1 mm anterior to the bregma1. In this study we used a steel guide screw, although plastic guide screws are also available for those studies that require brain imaging such as MRI or PET6. Even if the automated infusion pump is cost prohibitive for some groups, cells can still be injected manually more quickly than stereotactic approaches. Overall, this rapid, accurate and reproducible method can be used to study glioma, medulloblastoma and brain stem tumors7. This procedure has been performed on over 500 mice between our two laboratories with deaths due to unexpected anesthetic reactions (<1%). Mice that were bolted with the guide screw and subsequently infused with cells did not die or suffer any neurological complications as a result of the procedure. Animals have survived past 100 days without any complications. Although we preferred to use a hairless mouse, an immuno-compromised mouse with hair like the SCID would be just as appropriate provided the skull hair was removed prior to the surgery to keep the site clean and to prevent hair interfering with guide screw.

There are several novel therapeutics currently being developed for the treatment of glioma8-10. Recently we showed that subcutaneous U87MG glioma xenografts can be inhibited by treatment with AMG1023; a humanized antibody directed to HGF currently undergoing clinical evaluation in glioma5. We used the method describe here to establish intracranial U87MG tumors in the brains of nude mice. Our study clearly shows the utility of the method and demonstrates that AMG102 significantly inhibits the growth of orthotopic U87MG xenografts. We will continue to use this model to determine what other therapeutics can be used in combination with AMG102 to obtain more effective inhibition of tumor growth.

This work was supported by a Research Grant from Amgen Inc.

The authors would like to thank Verlene Henry and Lindsay Holmes for assistance in developing this model. This work was partially funded by the James S. McDonnell Foundation (#220020173). 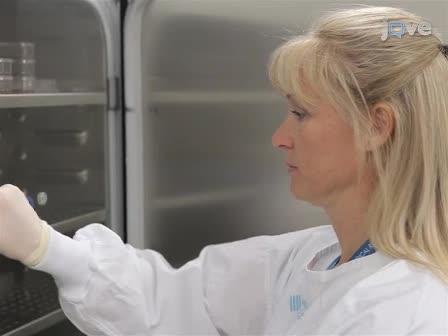