Planar and three-dimensional printing of conductive metallic inks is described. Our approach provides new avenues for fabricating printed electronic, optoelectronic, and biomedical devices in unusual layouts at the microscale.

Printed electronics rely on low-cost, large-area fabrication routes to create flexible or multidimensional electronic, optoelectronic, and biomedical devices1-3. In this paper, we focus on one- (1D), two- (2D), and three-dimensional (3D) printing of conductive metallic inks in the form of flexible, stretchable, and spanning microelectrodes.

Direct-write assembly4,5 is a 1-to-3D printing technique that enables the fabrication of features ranging from simple lines to complex structures by the deposition of concentrated inks through fine nozzles (~0.1 - 250 μm). This printing method consists of a computer-controlled 3-axis translation stage, an ink reservoir and nozzle, and 10x telescopic lens for visualization. Unlike inkjet printing, a droplet-based process, direct-write assembly involves the extrusion of ink filaments either in- or out-of-plane. The printed filaments typically conform to the nozzle size. Hence, microscale features (< 1 μm) can be patterned and assembled into larger arrays and multidimensional architectures.

In this paper, we first synthesize a highly concentrated silver nanoparticle ink for planar and 3D printing via direct-write assembly. Next, a standard protocol for printing microelectrodes in multidimensional motifs is demonstrated. Finally, applications of printed microelectrodes for electrically small antennas, solar cells, and light-emitting diodes are highlighted.

We prepared a highly concentrated silver nanoparticle inks and demonstrated printed conductive features in planar and 3D motifs for electronic and optoelectronic applications with printing resolution ~ 2 - 30 μm. For an example, Figure 8 exhibits the printing resolution of this technique. Printed features with minimum electrode width of ~ 2 μm (1.4 μm thick) are obtained in a single pass using a 1-μm nozzle11.

Conformal printing onto a non-planar substrates is also enabled by this method. Figure 10 demonstrates the conformal printing of a 3D electrically small antenna. A 100 μm metal nozzle is used to print meander-line patterns on the surface of a glass hemisphere13. This approach may find several applications including implantable and wearable antennas, electronics, and sensors.

First, Figure 11 is an example of silicon spherical shell. This tenuous film with a 2-μm thickness can be wire-bonded to an external circuit by omnidirectional printing14. This method uses minimal contact pressure, which is highly advantageous for delicate devices.

Next, Figure 12 demonstrates an example of printing a spanning interconnect for a silicon solar microcell array in which silicon microribbon elements are separated by 33-μm gap15.

Next, Figure 13 shows silver interconnects for the gallium arsenide-based LED array with 4-by-4 pixels, where each pixel (500 x 500 x 2.5 μm3) is spaced 200 μm apart11. The bottom image displays the LED array, emitting uniform red light under an applied bias of 6 V from a single pixel. The ability to print spanning electrodes enables multilayer interconnection without the use of supporting or sacrificial layers (top images).

As a final demonstration, Figure 14 shows SEM images for the complex 3D microperiodic silver lattice printed by a 5μm nozzle. 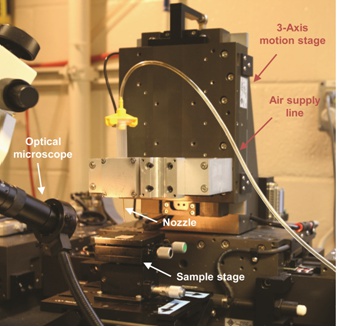 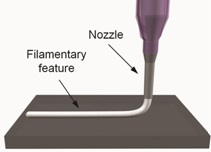 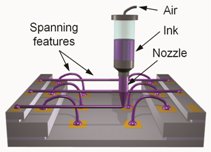 Figure 4. Ink designs for direct ink writing. A wide range of concentrated viscoelastic inks have been developed for direct writing of planar and complex 3D structures with microscale features. 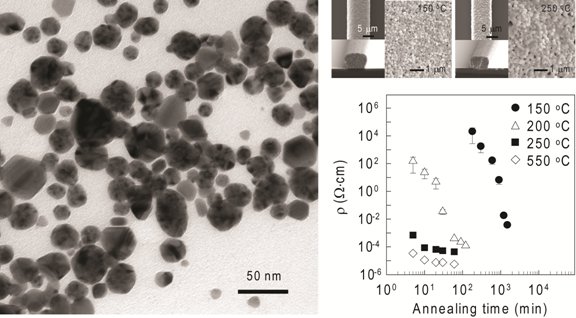 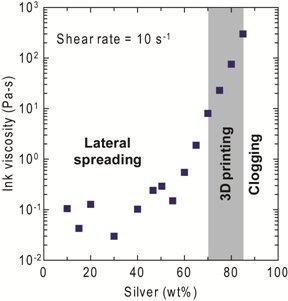 Figure 6. Apparent viscosity (η) of the silver nanoparticle inks as a function of solids loading. 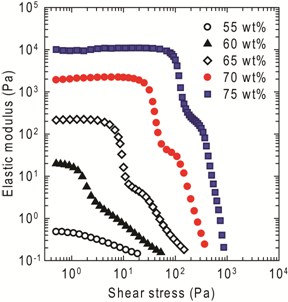 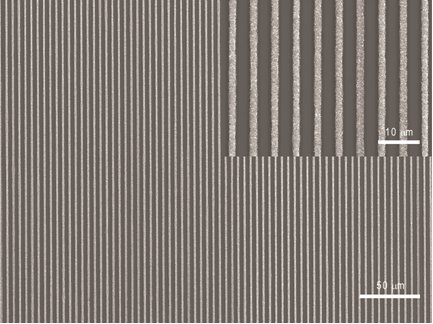 Figure 8. SEM images of planar arrays of silver microelectrodes patterned on a Si wafer with a 1-μm nozzle. 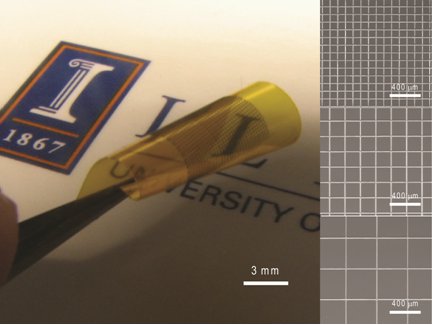 Figure 9. Optical image of transparent conductive silver grids (left) and SEM images of the grids printed as a function of line pitch (right). 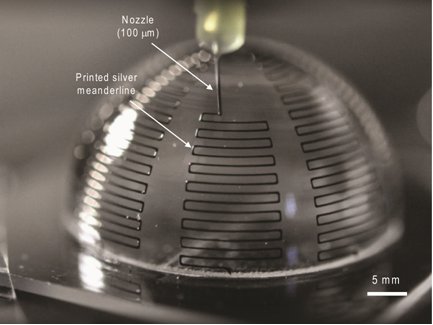 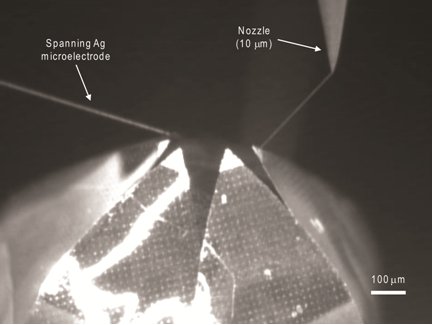 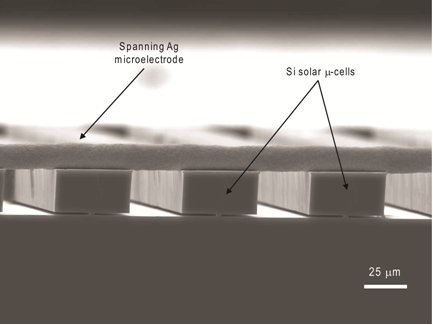 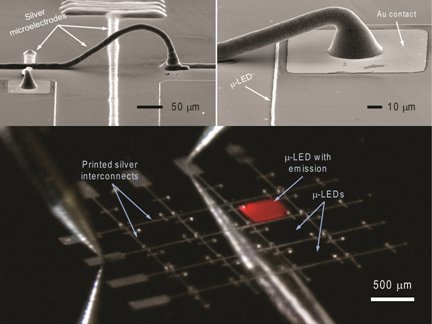 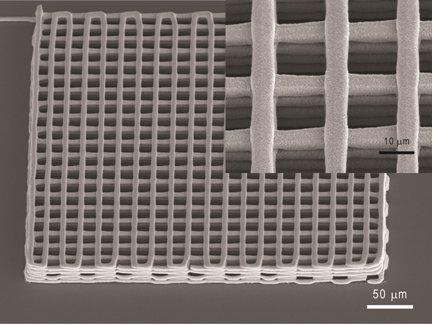 Conventional droplet-based printing approaches, such as inkjet printing, are limited to the fabrication of planar electrodes with low aspect ratio due to the dilute nature and low viscosity of the inks used. Recently, dip-pen nanolithography (DPN)20-22 and e-jet printing23-25 have been used to pattern conductive features. These routes also employ dilute, low viscosity inks. Pearton and co-workers used DPN to deposit a commercially available silver nanoparticle ink at write speeds of up to 1600 μm s-1 and line widths of approximately 0.5 μm22. However, fabrication of reproducible patterns over large areas has yet to be demonstrated by this approach. Silver nanoparticle inks have also been deposited by e-jet printing to form conductive traces with line widths of ~ 1.5 μm25. However, as with inkjet printing, inhomogeneous printed features may arise due to satellite drop formation and non-uniform drop drying24,25.

As demonstrated above, direct-write assembly of concentrated silver nanoparticle inks overcomes these limitations through a filamentary-based printing approach. This technique enables the fabrication of conductive microelectrodes with a high aspect ratios (h/w ≈ 1.0) in a single passes allowing the creation of 1D, 2D, and 3D architectures. The size of the printed features depends upon nozzle diameter, ink solids loading, applied pressure, and printing speed. To date, conductive traces as small as ~ 2 μm have been patterned using a 1 μm nozzle at modest speeds (< 2 mm s-1). By tailoring the ink composition and nozzle geometry, maximum printing speeds in excess of 10 cm s-1 are possible. However, high speed printing of using fine nozzles (< 5 μm) remains a significant challenge.

To demonstrate applications of direct-write assembly, we fabricated conductive grids, electrically small antennas, solar cells, and light-emitting diodes with planar and spanning printed electrodes (Figure 8-14). Notably, our approach is not restricted to the creation of metallic structures. Using other ink designs, such as those based on silk fibroin, hydrogel and fugitive organic inks, we have constructed 3D scaffolds and microvascular networks for tissue engineering and cell culture via direct-write assembly26-30.

Looking towards the future, there are many opportunities and challenges. Further advances require new ink designs, better modeling of ink flow dynamics, and enhanced robotic and control systems. Large-area fabrication of 1D to 3D structures with high throughput and nanoscale resolution (< 100 nm) remains a significant challenge.

This material is based on work supported by the U.S. Department of Energy, Materials Sciences and Engineering Division (Award No. DEFG-02-07ER46471) and the DOE Energy Research Center on Light-Materials Interactions in Energy Conversion (Award No. DE-SC0001293), and benefitted from access to the Center for Microanalysis of Materials within the Frederick Seitz Materials Research Laboratory (FSMRL). 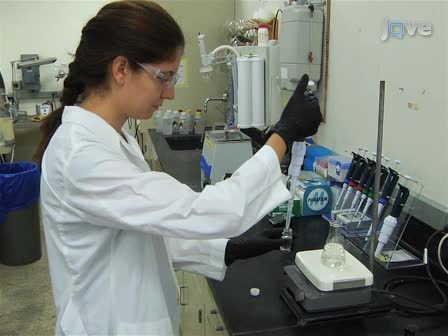