Droplet-based microfluidic platforms are promising candidates for high throughput experimentation since they are able to generate picoliter, self-compartmentalized vessels inexpensively at kHz rates. Through integration with fast, sensitive and high resolution fluorescence spectroscopic methods, the large amounts of information generated within these systems can be efficiently extracted, harnessed and utilized.

The development of microfluidic platforms for performing chemistry and biology has in large part been driven by a range of potential benefits that accompany system miniaturisation. Advantages include the ability to efficiently process nano- to femoto- liter volumes of sample, facile integration of functional components, an intrinsic predisposition towards large-scale multiplexing, enhanced analytical throughput, improved control and reduced instrumental footprints.1

In recent years much interest has focussed on the development of droplet-based (or segmented flow) microfluidic systems and their potential as platforms in high-throughput experimentation.2-4 Here water-in-oil emulsions are made to spontaneously form in microfluidic channels as a result of capillary instabilities between the two immiscible phases. Importantly, microdroplets of precisely defined volumes and compositions can be generated at frequencies of several kHz. Furthermore, by encapsulating reagents of interest within isolated compartments separated by a continuous immiscible phase, both sample cross-talk and dispersion (diffusion- and Taylor-based) can be eliminated, which leads to minimal cross-contamination and the ability to time analytical processes with great accuracy. Additionally, since there is no contact between the contents of the droplets and the channel walls (which are wetted by the continuous phase) absorption and loss of reagents on the channel walls is prevented.

Once droplets of this kind have been generated and processed, it is necessary to extract the required analytical information. In this respect the detection method of choice should be rapid, provide high-sensitivity and low limits of detection, be applicable to a range of molecular species, be non-destructive and be able to be integrated with microfluidic devices in a facile manner. To address this need we have developed a suite of experimental tools and protocols that enable the extraction of large amounts of photophysical information from small-volume environments, and are applicable to the analysis of a wide range of physical, chemical and biological parameters. Herein two examples of these methods are presented and applied to the detection of single cells and the mapping of mixing processes inside picoliter-volume droplets. We report the entire experimental process including microfluidic chip fabrication, the optical setup and the process of droplet generation and detection.

4. Cell recognition and mapping of mixing within droplets

Typical examples of the variation of photon counts as a function of time for the cell-based experiments are shown in Figures 4a and c, over a period of two hundred milliseconds. Importantly the Luria–Bertani broth (LB medium) acts as a weakly fluorescing background defining the aqueous droplet boundaries, whilst distinct photon bursts, corresponding to the presence of individual cells, can be distinguished on top of this background. The LB fluorescent background is characterised by an approximately rectangular cross-section (marked by the red and green dotted lines).

The full width half maximum (FWHM) of fluorescent bursts arising from E. coli cells is 30-fold shorter than the background droplet events, which is consistent with the relative length of droplets (40 microns, corresponding to a volume of 30 picolitres) and E. coli cells (1.5–2.0 microns).10

With the dual channel detection system, the existence of live cells or dead cells can be distinguished from analysis of the green and red channels. Figures 4 b and d show the probability distribution describing the number of cells per droplet.

The molecular fluorescence lifetime is an intrinsic property of an individual fluorophore that is affected only by its chemical environment. Accordingly its measurements can be used to obtain environmental information (such as solution pH, temperature, polarity and viscosity) with superior resolution and precision than time integrated fluorescence measurements, which are dependent on experimental factors (such as concentration, excitation intensity, and optical collection efficiency).9,11

As presented elsewhere,8 it is possible to map the mixing patterns inside droplets by using two fluorophores with different lifetime values. In a mixture containing two (non-interacting) fluorescent species the decay will take on a biexponential form as is shown in equation 1:

The individual lifetimes are defined as τ1 and τ2; and the amplitude of each component is given by α1 and α2 respectively. The average lifetime can then be defined as follows:

Where β1 and β2 are the fraction of each component and are defined as follows:

Since the probe volume is fixed and droplets are flowing across that position, a trajectory of the lifetime values along the length of the droplets at that particular width can be thus obtained. A characteristic trajectory for a particular width, averaged among 6000 droplets, can be observed in Figure 5a.

Combining the trajectories throughout the entire width of the channel leads to the formation of a 2D concentration (or mixing) map. A typical result is presented in Figure 5b.

By averaging the results among a large number of droplets, the standard error of the results obtained can be greatly reduced (1% of standard error with a 95% confidence interval for Figure 5a). The determination method of the lifetime trajectory assumes that all droplets are practically identical. This is proven to be largely correct for two main reasons: if droplets were significantly different, the averaged lifetime trajectories obtained would have flatter, less diverging profiles (and sharp differences in lifetime along the length of the averaged droplets are consistently detected). Furthermore, the results are reproducible regardless of the individual droplets analyzed or the amount of droplets used in the calculations.8 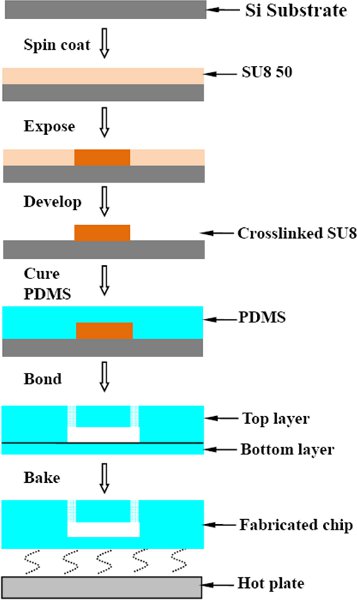 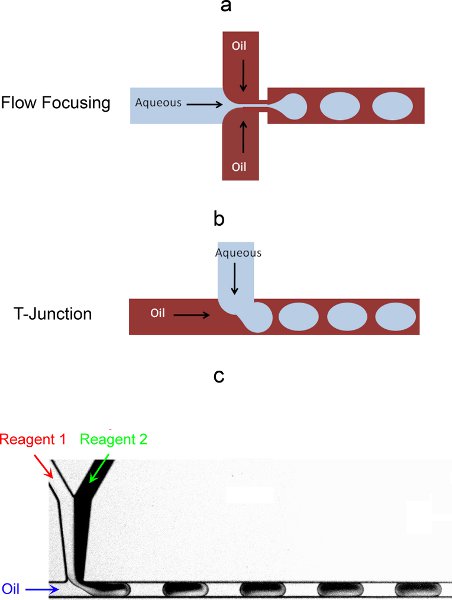 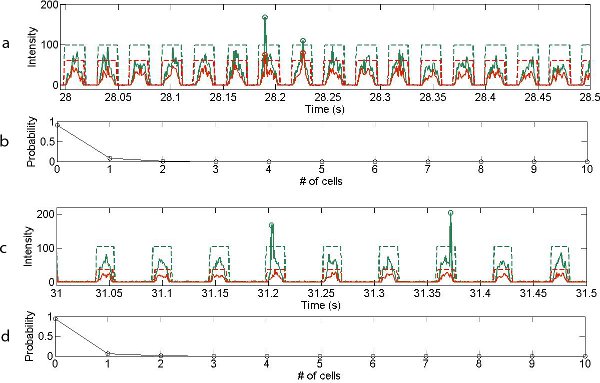 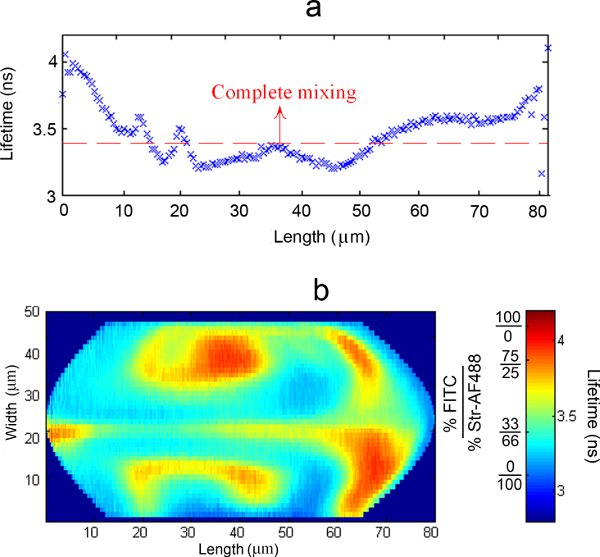 Figure 5. a) Typical averaged lifetime trajectory along the length of a droplet at a particular width; b) Typical representation of the combination of all the averaged trajectories probed along the full width of the droplets into a 2D lifetime (or concentration, expressed as % FITC / % Str-AF488) map.

We have described the fabrication of a microfluidic device, an experimental setup and associated protocols for microdroplet formation and reagent encapsulation and optical detection of the processed droplets. The two examples selected (the detection of single cells in droplets and the mapping of mixing processes inside flowing droplets) represent common applications that are currently being investigated with droplet microfluidics.

As the presented experiments illustrate, the use of droplet microfluidic platforms present certain attractive characteristics, such as high throughput, quasi-perfect confinement, high reproducibility… The large amount of information produced and the high speed at which this information is being generated, though, require the use of fast detection methods with high spatiotemporal resolution if the full advantage is to be gained from these miniaturized platforms. In this case we demonstrate that this is possible using highly precise fluorescent spectroscopic techniques. In particular, the FLIM detection technique (which makes use of a pulsed laser with repetition periods as short as a few ns) reveals the capacity to obtain very fast information from rapidly flowing droplets (of around 200 per second). In this case the time resolution of detected events was as low as 1 μs. In terms of limits in droplet size and concentration, the use of larger numerical aperture lenses and larger power lasers would easily permit the detection of nM concentrations within droplets as small as 5 μm (the limitations in droplet size being imposed by the resolutions of the photolithographic fabrication process and of the submicron positioning stage).

Microfluidic droplets are ideal candidates to carry out large scale experimentation involving small amounts of reagents, down to single target/event. Current limitations of this technology involve the difficulty to generate droplets from a large variety (tens or hundreds) of different sources in a high-throughput manner. Additionally, the difficulty to target and manipulate each single droplet generated imposes severe limitations to the practical applicability of these techniques. Therefore, these issues are at the center of important research efforts aimed at developing the necessary technological solutions that will enable microfluidic droplet platforms to become a standard reference method of research and analysis in high throughput applications. 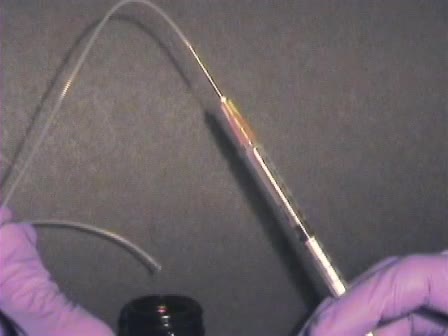