We provide a simple, semi-quantitative method to investigate biofilm formation in vitro. This method takes advantage of the Zeiss stemi 2000-C Dissecting Microscope (with camera attachment) to monitor both the timing and pattern of biofilm formation, as assessed by the development of wrinkled colonies.

Biofilms, or surface-attached communities of cells encapsulated in an extracellular matrix, represent a common lifestyle for many bacteria. Within a biofilm, bacterial cells often exhibit altered physiology, including enhanced resistance to antibiotics and other environmental stresses 1. Additionally, biofilms can play important roles in host-microbe interactions. Biofilms develop when bacteria transition from individual, planktonic cells to form complex, multi-cellular communities 2. In the laboratory, biofilms are studied by assessing the development of specific biofilm phenotypes. A common biofilm phenotype involves the formation of wrinkled or rugose bacterial colonies on solid agar media 3. Wrinkled colony formation provides a particularly simple and useful means to identify and characterize bacterial strains exhibiting altered biofilm phenotypes, and to investigate environmental conditions that impact biofilm formation. Wrinkled colony formation serves as an indicator of biofilm formation in a variety of bacteria, including both Gram-positive bacteria, such as Bacillus subtilis 4, and Gram-negative bacteria, such as Vibrio cholerae 5, Vibrio parahaemolyticus 6, Pseudomonas aeruginosa 7, and Vibrio fischeri 8.

In this report, we describe a semi-quantitative method to assess biofilm formation using V. fischeri as a model system. This method involves the careful spotting of bacterial cultures at defined concentrations and volumes onto solid agar media; a spotted culture is synonymous to a single bacterial colony. This 'spotted culture' technique can be utilized to compare gross biofilm phenotypes at single, specified time-points (end-point assays), or to identify and characterize subtle biofilm phenotypes through time-course assays of biofilm development and measurements of the colony diameter, which is influenced by biofilm formation. Thus, this technique provides a semi-quantitative analysis of biofilm formation, permitting evaluation of the timing and patterning of wrinkled colony development and the relative size of the developing structure, characteristics that extend beyond the simple overall morphology.

In these experiments we used V. fischeri as a model organism to study biofilm formation by evaluating the development of wrinkled colonies on a solid agar surface. Biofilm-producing strains of V. fischeri form colonies with extensive 3D architecture within 40 h (Fig. 1) 8,9,14. When examined over a time course, it becomes apparent that wrinkled colony formation by the control strain initiates as early as about 12 h post-inoculation (depending on the specific conditions) (Fig. 2) 9. In contrast, biofilm formation by a representative mutant is delayed by approximately 4 h, not initiating until approximately 16 h post-inoculation 9. Repeats of these experiments suggested that the timing was relatively consistent, making this assessment semi-quantitative 9. A second semi-quantitative measure of biofilm formation makes use of the change in diameter of the developing colony over time. As shown in Fig. 3A, a representative biofilm-competent strain forms colonies that increase in complexity and diameter relative to a representative strain that does not form biofilms. Careful measurements over time of the diameters of the colonies formed by these two strains revealed that the size of the biofilm-competent colonies increased at a greater rate than the biofilm-negative colonies, and at the end time point the two differed by almost 2-fold (Fig 3B). Thus, although images of a representative late time or "end-point" colony morphology frequently are shown in the literature, additional, semi-quantitative data can be collected that will permit a better understanding of the biofilm defect. 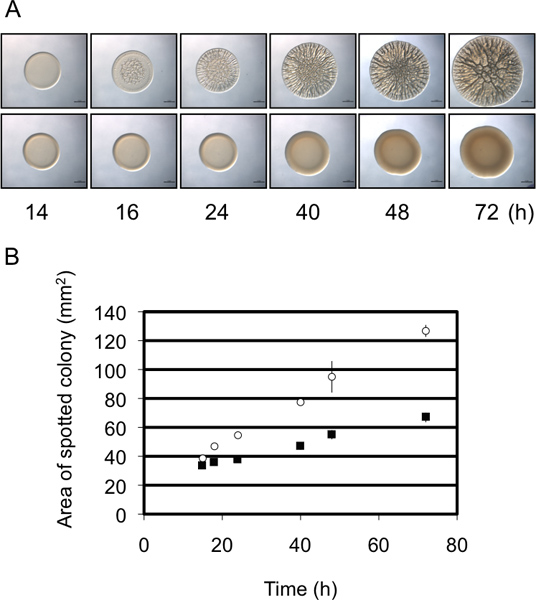 Figure 3. Colony diameter as a semi-quantitative analysis of biofilm formation. (A) Time course of biofilm formation by representative biofilm-forming (upper panel) and non-biofilm-forming (lower panel) strains of V. fischeri. Note that the biofilm-forming strain exhibits a greater increase in diameter over time relative to the non-biofilm forming strain. These images were generated with wild-type V. fischeri containing an rscS overexpressing plasmid (biofilm-forming) or a vector control (non-biofilm-forming) and were part of the data set collected for Morris et al., 2011. (B) A graphical representation of the increase in colony diameter over time by the two strains in panel A. These data were generated using the ImageJ and Excel software as outlined in the protocol.

When performing spotted cultured assays, it is important to consider the environmental conditions in which the spotted strains are cultured. Wrinkled colony formation is often influenced by various environmental conditions, including nutrient availability, temperature, and humidity. To reduce variability between experiments, it is helpful to standardize these conditions as much possible (i.e. standardizing the agar plates to a set volume and culturing the spotted strains at a controlled temperature). To further control for variability between spotting experiments, is important to include the appropriate control strains within each set of experiments. Finally, when interpreting the data from these assays, it is necessary to perform any one experiment multiple times (3+), especially when assessing subtle differences in wrinkled colony formation (e.g., a delay in biofilm formation or patterning differences). Some limitations of this protocol are: 1) determining whether cells have a defect in growth may be difficult: growth of cells in liquid culture may not accurately reflect growth rates on solid media, and an accurate determination of growth of biofilm-forming cells, which may stick together, may not be possible; 2) strains with growth defects will be problematic to analyze; 3) it may not be possible to distinguish diameter differences between strains with subtle biofilm phenotypes; 4) for strains that do not grow in a concentric ring it may not be possible to accurately measure changes in diameter; 5) while patterning can be observed during biofilm formation, there is no way to quantify the patterning of the resulting biofilm; and 6) there is no way to measure the Z-dimension of the biofilm with this experimental set-up. Despite these limitations, this protocol nevertheless provides a means to obtain numerical data to aid in assessing wrinkled colony formation.

In this protocol, we utilize a specific imaging system (i.e., a Zeiss dissecting microscope and ProgRes CapturePro imaging software) to observe and evaluate wrinkled colony formation. The imaging system described here is powerful: the ability to detect the start of wrinkled colony formation, and thus assess development with a time course approach, is greatly enhanced through the use of a dissecting microscope. However, if this technology is unavailable, the protocol can be adapted for use with other equipment, including a simple digital camera with a zoom focus. While this protocol focuses on assessment of wrinkled colony development, it could also be modified to evaluate pellicle formation, a form of biofilm that develops when cells are growing statically in liquid culture. This protocol may also prove useful in assessing other indicators of biofilm formation, including the incorporation of specific dyes into the spotted colonies during biofilm development. These include, but are not limited to, dyes such as Congo Red and calcofluor which can bind to cellulose, a common component of bacterial biofilms 16. Additionally, this protocol, although developed for use with V. fischeri, is not limited to this organism but can be generalized to studying biofilm formation in numerous different organisms, such as Bacillus subtilis 4, Vibrio cholerae 5 , Vibrio parahaemolyticus 6, and Pseudomonas aeruginosa 7, which all exhibit wrinkled colony formation. Finally, it also can be adapted to study other colony morphologies that have a developmental pattern, such as, potentially, the patterning that occurs during growth of Myxococcus xanthus 17 and aerial structure development in Pseudomonas aeruginosa 18. This protocol is thus of general use to microbiology and biofilm researchers.

Production and Free Access to this article is sponsored by Zeiss, Inc.

This work was supported by NHI R01 grant GM59690 awarded to KLV. 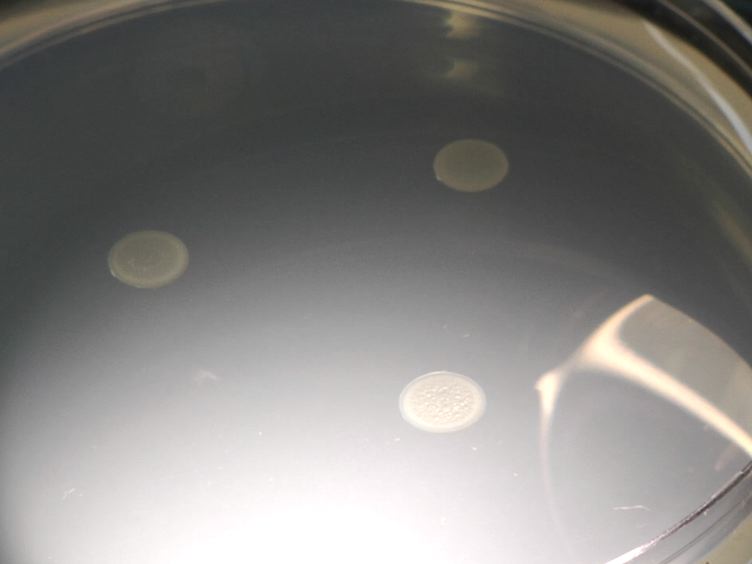