Targeted ablation of specific brain region(s) by infusion of an excitotoxin using stereotaxic coordinates is described. This technique could also be adapted for infusion of other chemicals into the rat brain.

Many behavioral functions in mammals, including rodents and humans, are mediated principally by discrete brain regions. A common method for discerning the function of various brain regions for behavior or other experimental outcomes is to implement a localized ablation of function. In humans, patient populations with localized brain lesions are often studied for deficits, in hopes of revealing the underlying function of the damaged area. In rodents, one can experimentally induce lesions of specific brain regions.

Lesion can be accomplished in several ways. Electrolytic lesions can cause localized damage but will damage a variety of cell types as well as traversing fibers from other brain regions that happen to be near the lesion site. Inducible genetic techniques using cell-type specific promoters may also enable site-specific targeting. These techniques are complex and not always practical depending on the target brain area. Excitotoxic lesion using stereotaxic surgery, by contrast, is one of the most reliable and practical methods of lesioning excitatory neurons without damaging local glial cells or traversing fibers.

Here, we present a protocol for stereotaxic infusion of the excitotoxin, N-methyl-D-aspartate (NMDA), into the basolateral amygdala complex. Using anatomical indications, we apply stereotaxic coordinates to determine the location of our target brain region and lower an injection needle in place just above the target. We then infuse our excitotoxin into the brain, resulting in excitotoxic death of nearby neurons. While our experimental subject of choice is a rat, the same methods can be applied to other mammals, with the appropriate adjustments in equipment and coordinates.

This method can be used on a variety of brain regions, including the basolateral amygdala1-6, other amygdala nuclei6, 7, hippocampus8, entorhinal cortex9 and prefrontal cortex10. It can also be used to infuse biological compounds such as viral vectors1, 11. The basic stereotaxic technique could also be adapted for implantation of more permanent osmotic pumps, allowing more prolonged exposure to a compound of interest.

Anesthesia and analgesia: Thirty minutes prior to anesthesia, inject the rat with 0.05 mg/kg subcutaneous buprenorphine for analgesia. Initiate anesthesia with 30-40 mg/kg intraperitoneal sodium pentobarbital. At this point, also inject atropine to prevent respiratory failure (0.4 mg/kg, subcutaneous) and meloxicam as further analgesic (2 mg/kg subcutaneous). If after 5 minutes, the rat is still mobile or responsive to toe pinch, give subsequent doses of sodium pentobarbital at 5 mg/kg (intraperitoneal) until the rat is unresponsive to pain. Before performing the first incision, inject lidocaine (5 mg/kg, intradermal) at the incision site for local anesthesia. Six to eight hours after initial injection, inject the rat with 0.05 mg/kg subcutaneous buprenorphine for analgesia. Buprenorphine can be injected every 6-8 hours thereafter if needed, though this is usually not necessary.

It is important to note that other forms of anesthesia can interfere with excitotoxic lesions. For example, although ketamine is a commonly used form of anesthesia in rodents, it can interfere with lesions induced with NMDA because it is an NMDA receptor antagonist. It is important to select a method of inducing anesthesia that does not reduce lesion size. If gas anesthesia is desired, most stereotaxic devices including those described here can accommodate gas mask adaptors.

Note: Materials are described further in the Table of specific reagents and equipment below.

1. Preparation of the Pump and Stereotax

2. Mount the Rat in the Stereotaxic Device

3. Preparing the Rat for Surgery

5. Leveling the Skull and Creating the Pilot Hole

One week or more after NMDA infusion, the lesion can be visualized using a cresyl-violet counterstain and brightfield microscopy. Brains should be perfused with ice cold 4% paraformaldehyde, equilibrated in 30% sucrose in 0.1M PBS and frozen. They should then be sliced at 30-60 μm, in a series of 1:6 to 1:12 and mounted on to gelatin-coated glass slides before undergoing a standard cresyl violet counterstain. The lesion should correspond to a "bald spot" or an area of decreased cresyl violet stain due to cell death following lesion. Figures 5A and B show a representative lesion of the BLA and CeA. This image was obtained using a flatbed scanner with a high resolution scan (1200 dpi). To visualize the lesion, it helps to counterstain a series of sections through much of the tissue surrounding the target area so a misplaced lesion can be located. 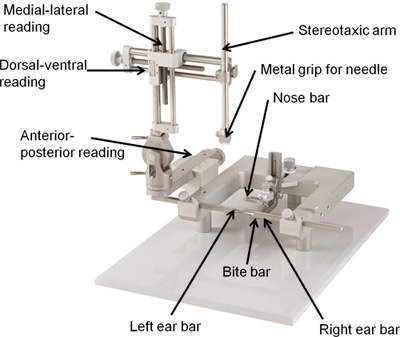 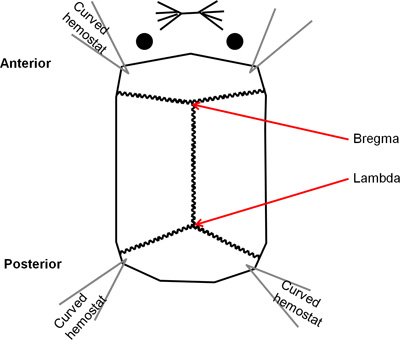 Figure 2. Bregma and lambda on the rat skull. This illustration depicts the locations of bregma and lambda. All coordinates are measured relative to bregma. Lambda is used to ensure that the skull is level. 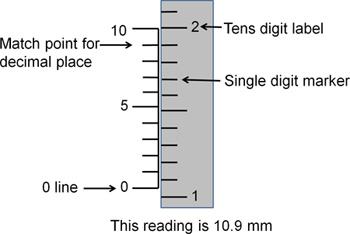 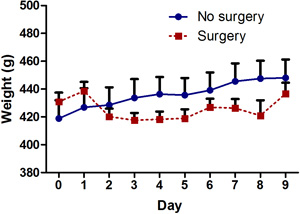 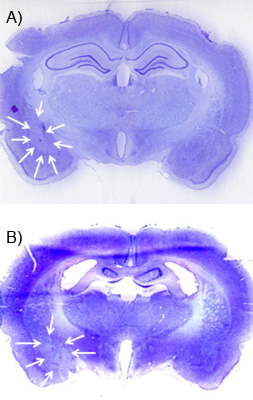 Figure 5. Excitotoxic lesion example. A) This image shows a cresyl violet counterstain on a 30 μm coronal slice with the "bald spot" from NMDA lesion of the basolateral amygdala. The white arrows outline the lesion. It can be compared to the contralateral side of the brain slice which has no lesion. B) A similar lesion of the central nucleus amygdala.

The stereotaxic method presented here allows for excitotoxic lesion of specific brain areas via infusion of NMDA. The basic stereotaxic methods can be adapted to infuse a variety of pharmacological and biological agents in a site-specific manner. It can also be adapted to target a variety of brain areas, defined by their stereotaxic coordinates in a brain atlas12. Adaptation to other species such as mice can be made with similar equipment built for smaller animals. The present procedures are optimized for 3 mo old adult rats, but they could be used for a variety of ages from juveniles through older adults. If working with younger animals that may not be represented in a standard brain atlas, exploratory surgeries infusing a colorful dye can help determine the proper needle placement empirically.

For investigators who require long-term implantation of a cannula using stereotaxic surgery, Geiger et al.13 present an alternative protocol with appropriate incision closure and aftercare instructions. If targeting smaller brain regions is desired, however, it should be noted that the present protocol offers more precise methods for head placement and leveling in the stereotaxic device. The present protocol also offers incision clamping methods that allow for a wider surgical window, often necessary when targeting lateral structures such as the BLA.

Following surgery, weight loss compared to control animals is normal and expected. Figure 4 shows the change in weight of adult male rats that underwent surgery versus unmanipulated controls from the same cohort. Rats can be expected to show weight loss for the first 2-3 days after surgery and then begin to gain weight again after 5-6 days. More prolonged weight loss could indicate infection or other problems.

Occasionally, a rat will remove its wound clips. If the incision has healed, this does not present a problem. If the incision has not healed and is open, the wound clip must be replaced either with another clip or with sutures, both of which can be performed under isoflurane anesthesia. Including antibiotics (80-96 mg trimethoprim sulfa/kg/day, 240 mg/5 ml water) in the drinking water for the next 5 days may also be advisable to prevent infection if the wound was open to the environment.

Perhaps the most challenging aspect of this protocol is placement of the ear bars. Experimental surgeries with dye infusion followed by immediate sacrifice are recommended to check the accuracy of both ear bar placement and the selected stereotaxic coordinates. If the brain region to be targeted is in the midline, we recommend using an angled approach from either side of the brain as large blood vessels in the midline can prevent a direct midline approach.

Even when performed as well as possible, stereotaxic surgery still entails heavy exposure to analgesics and anesthetics, tissue damage and immune response. All these factors may affect experimental outcomes, particularly close to the time of surgery. Side-effects of surgery can be minimized by allowing for ample recovery time (at least one week) before beginning experimental procedures. Alternative approaches such as targeted genetic knockouts may be possible in mice but can be much more complex than stereotaxic surgery.

In summary, the described method allows for localized lesion of brain areas without damaging passing fibers. It can be adapted for numerous purposes and is highly reliable and verifiable. 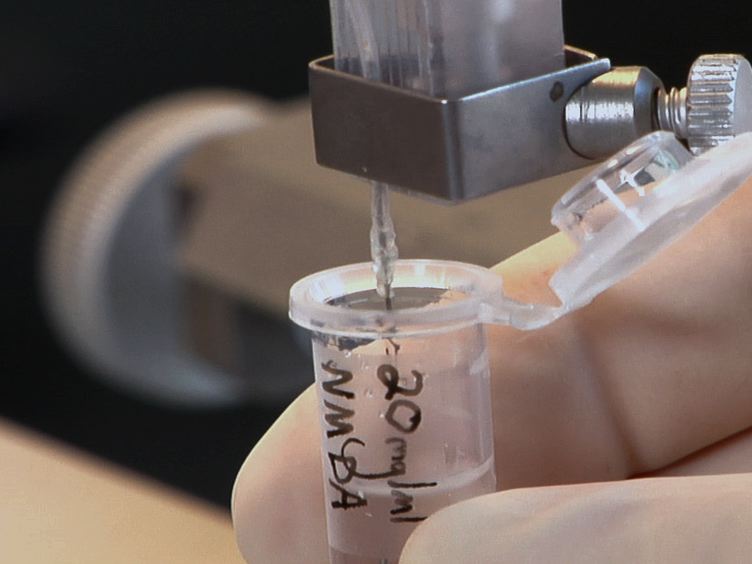