The complex process of axon guidance is largely driven by the growth cone, which is the dynamic motile structure at the tip of the growing axon. During axon outgrowth, the growth cone must integrate multiple sources of guidance cue information to modulate its cytoskeleton in order to propel the growth cone forward and accurately navigate to find its specific targets1. How this integration occurs at the cytoskeletal level is still emerging, and examination of cytoskeletal protein and effector dynamics within the growth cone can allow the elucidation of these mechanisms. Xenopus laevis growth cones are large enough (10-30 microns in diameter) to perform high-resolution live imaging of cytoskeletal dynamics (e.g.2-4 ) and are easy to isolate and manipulate in a lab setting compared to other vertebrates. The frog is a classic model system for developmental neurobiology studies, and important early insights into growth cone microtubule dynamics were initially found using this system5-7 . In this method8, eggs are collected and fertilized in vitro, injected with RNA encoding fluorescently tagged cytoskeletal fusion proteins or other constructs to manipulate gene expression, and then allowed to develop to the neural tube stage. Neural tubes are isolated by dissection and then are cultured, and growth cones on outgrowing neurites are imaged. In this article, we describe how to perform this method, the goal of which is to culture Xenopus laevis growth cones for subsequent high-resolution image analysis. While we provide the example of +TIP fusion protein EB1-GFP, this method can be applied to any number of proteins to elucidate their behaviors within the growth cone.

Note: We describe the steps in the first two sections only in brief, as excellent protocols with detailed information have been published elsewhere that focus more specifically on these steps (e.g.8-12). Additionally, the general protocol of working with Xenopus spinal neurons in live cell culture has been previously published in a detailed methods article8. We highly recommend reviewing that article as a complement to this video, although here we do provide enough information to successfully perform and troubleshoot the neural tube dissection and plating protocol in step 3.

1. In Vitro Fertilization of Xenopus Eggs

Note: while we utilize RNA injection here, these techniques are not limited to RNA, and DNA, proteins, or modified nucleic acids for gene manipulation can also be used and have been described previously12.

After following the protocol, which is summarized in Figure 1A, healthy, correctly-dissected and cultured neural explants will send out numerous axons or neurites in every direction on laminin/poly-lysine substrate, shown in Figure 1B. The growth cones at the tips of the axons can be imaged by either DIC optics, as seen in Figure 1C, to image overall motility dynamics, or high-resolution fluorescence microscopy to examine the localization of fluorescently-tagged cytoskeletal proteins, for example, EB1-GFP is shown in Figure 1D. 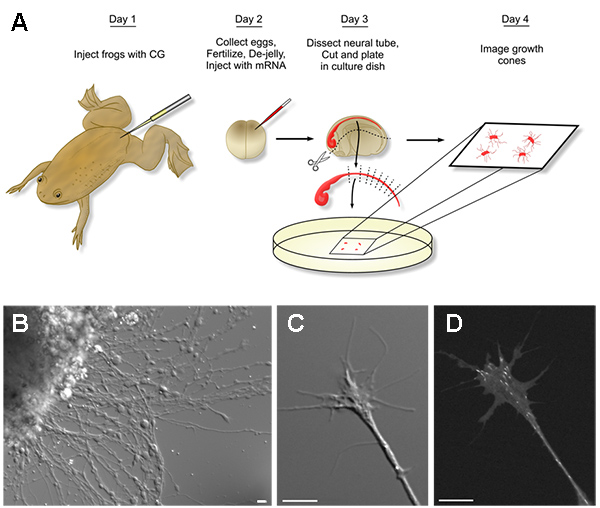 Figure 1. Summary of experimental protocol and expected outcome. A) Protocol flow-chart. See movie for details regarding dissection on day 3. The entire neural tube should be cut into about 20 equally-sized pieces and spread out evenly in rows on the coverslip. In this cartoon, scissors are depicted to represent cutting the tissue with fine forceps. CG chorionic gonadotropin B) DIC image of axons or neurites growing out of explant (explant at top left corner). C) Higher magnification image of growth cone at tip of a growing axon. D) Fluorescence microscopy image of EB1-GFP in growth cone. Scale bar 10 μm. Click here to view larger figure.

Xenopus laevis neural explants send out neurites in a very robust manner by 24 hr after plating on the laminin/poly-lysine substrate if conditions are appropriate. With this substrate, growth cones are highly motile and can achieve axon lengths of up to 1 mm, extending in all directions outward from the explant, although typical lengths are 100 μm or more. If neurites do not grow out, there are a limited number of reasons for this to be the case. One possibility is that the neural explants did not properly adhere to the dish. Make sure to not disrupt attachments by accidentally moving the dish after plating. Also, ensure that laminin- and poly-lysine-coated dishes were made correctly with all freshly-prepared reagents. Another possibility for lack of outgrowth is that cell culture media conditions may not be optimal. Double check protocol and calculations to ensure that all media solutions have been correctly formulated. Finally, it is possible that embryos from which the explants were obtained might be unhealthy, although if embryos can develop to the neural tube stage, this is less likely to be the issue. However, it is best to keep some whole intact embryos cultured in 0.1X MMR along with dissections to ensure that continued development occurs.

The most critical step of this protocol is the neural tube dissection. Compared to many model system embryo micro-dissections, this is a relatively simple technique and Xenopus laevis embryos are one of the largest and most forgiving of organisms for dissecting. However, if the experimenter is completely new to performing embryonic dissections, this step may take several hours to perfect (best spread out over 2-3 sessions). After the collagenase treatment, some prefer to next remove the mesoderm, notochord, and somites, followed by the epidermis, thus resulting in the isolated neural tube, while others prefer to start with epidermis removal and then separating the other tissues from the neural tube. It is recommended to try both methods to determine which works best for each researcher. Also, be careful to not put too much strain on the neural tube during its isolation. It is better to remove the other tissues from the neural tube, rather than remove the neural tube from the other tissues, in order to reduce tension on the tube and prevent it from fragmenting prematurely. Finally, if surrounding tissues are too adherent to the neural tube, then place the explant back into the collagenase solution for several more minutes. This will make the separation of the neural tube from the surrounding tissues, especially the epidermis, much easier. The length of collagenase treatment depends on the stage of the embryo, as older embryos require longer treatments, up to 45 min or more for stage 28 embryos.

In addition to culturing neural tube explants, neural tubes could also be dissociated prior to plating, in order to image single cells. Protocols for this method are described in 8, 15. A benefit of this method is that neuronal morphology and neurite length can be examined, as the cell body is not obscured inside the explant. Moreover, neural explants can also be cultured on various patterned substrates. For example, the guidance cue "stripe assay" has been used to assess changes in growth cone dynamics in response to encountering substrate borders in culture 16, 17. A detailed protocol for preparing striped patterns of cues has been described 18. This can allow for the analysis of cytoskeletal dynamics while the growth cone undergoes guidance cue steering decisions.

There are a number of benefits to using Xenopus laevis for neural explant culturing experiments. Compared to other systems, culturing these primary neurons are relatively easy to obtain and require low cost. As they can be cultured and imaged at room temperature, expensive incubators are not required. Xenopus embryos are easily accessible and can be obtained in large quantities, they develop rapidly, and they are large enough to dissect with minimal training. Thus, this system is particularly suited for teaching laboratories.

Another advantage of using frog embryos is that they are amenable to manipulations of gene, mRNA, or protein expression levels, depending on the needs of a particular experiment. For example, a benefit of using mRNA is that the concentration and injection volume can be carefully titrated to control the resulting expression level, while injecting DNA, on the other hand, allows for the creation of transgenic embryos in which gene expression can be controlled by spatial or temporal specific promoter (e.g. 19 ). Thus, this neural explant method can be applied to multiple situations for understanding the behavior and function of proteins-of-interest during axon outgrowth and growth cone dynamics.

The authors would like to thank Bob Freeman for training and the Kirschner lab for the use of the frog facility, and members of the Van Vactor lab for support. We thank the Nikon Imaging Center at Harvard Medical School for assistance with light microscopy for the images in Figure 1. This work was funded by the following: NRSA NIH fellowship and NIH K99 fellowship to L.A.L, Basic Science Partnership funding (https://bsp.med.harvard.edu/) to AEF, and NIH RO1 NS035909 to D.V.V. 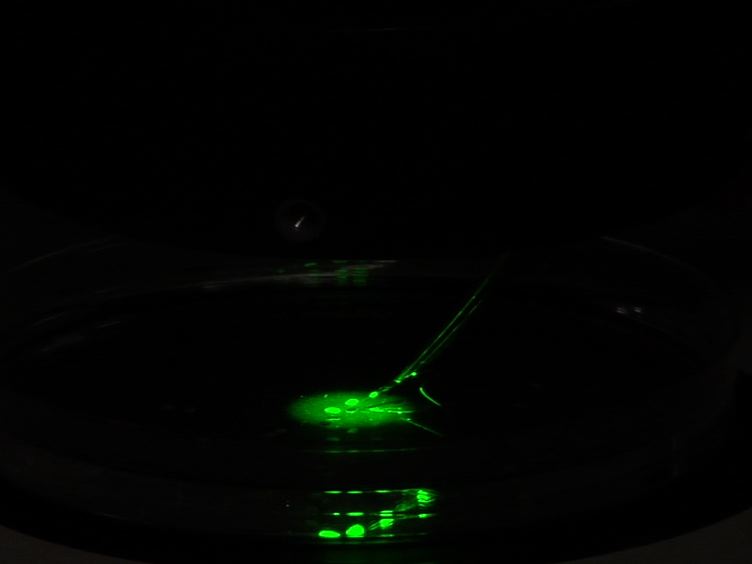