Orthotopic liver transplantation (OLT) in rats using a whole or partial graft is an indispensable experimental model for transplantation research, such as studies on graft preservation and ischemia-reperfusion injury 1,2, immunological responses 3,4, hemodynamics 5,6, and small-for-size syndrome 7. The rat OLT is among the most difficult animal models in experimental surgery and demands advanced microsurgical skills that take a long time to learn. Consequently, the use of this model has been limited. Since the reliability and reproducibility of results are key components of the experiments in which such complex animal models are used, it is essential for surgeons who are involved in rat OLT to be trained in well-standardized and sophisticated procedures for this model.

While various techniques and modifications of OLT in rats have been reported 8 since the first model was described by Lee et al. 9 in 1973, the elimination of the hepatic arterial reconstruction 10 and the introduction of the cuff anastomosis technique by Kamada et al. 11 were a major advancement in this model, because they simplified the reconstruction procedures to a great degree. In the model by Kamada et al., the hepatic rearterialization was also eliminated. Since rats could survive without hepatic arterial flow after liver transplantation, there was considerable controversy over the value of hepatic arterialization. However, the physiological superiority of the arterialized model has been increasingly acknowledged, especially in terms of preserving the bile duct system 8,12 and the liver integrity 8,13,14.

In this article, we present detailed surgical procedures for a rat model of OLT with hepatic arterial reconstruction using a 50% partial graft after ex vivo liver resection. The reconstruction procedures for each vessel and the bile duct are performed by the following methods: a 7-0 polypropylene continuous suture for the supra- and infrahepatic vena cava; a cuff technique for the portal vein; and a stent technique for the hepatic artery and the bile duct.

The schema of the removal of the liver from the donor rat is shown in Figure 2. This procedure requires approximately 30-35 min.

All procedures for the liver graft are performed in the metal cup filled with ice-cold HTK solution. The ex vivo graft preparation requires approximately 30 min.

The schema of the graft implantation in the recipient rat is shown in Figure 9. The recipient operation requires 60-70 min, which includes 10-11 min of anhepatic time and approximately 23-24 min of IHVC clamping time.

Immediately after the operation, treat the recipient rat with a subcutaneous injection of cefuroxime sodium (16 mg/kg) and buprenorphine (0.1 mg/kg) in a total of 1.5 ml of normal saline solution. Allow the rat to recover for 60 min in a special intensive care unit cage with warmed air (30-35 °C) and an oxygen supply. Inject buprenorphine (0.1 mg/kg) subcutaneously as an analgesic every 12 hours for 3 days. Afterward move the rat to a normal cage, and provide ad libitum access to water and food.

All recipient rats (n = 20) survived without apparent complications until planned euthanasia for blood sampling at 1, 3, 24, and 168 hr (7 days) after portal reperfusion (n = 5 at each time point). The blood samples were collected from the IHVC by a direct puncture with a 27-gauge needle. Following the centrifugation at 5,340 x g for 10 min, the serum samples were obtained and analyzed for alanine aminotransferase (ALT) levels, which reflect the degree of hepatocellular damage after transplantation. The time-course of changes in serum ALT levels is shown in Figure 16. The ALT levels reached a peak at 24 hr (mean ± standard deviation: 212.6 ± 67.9 IU/L) and then declined to within normal limits at 168 hr (33.6 ± 6.8 IU/L). 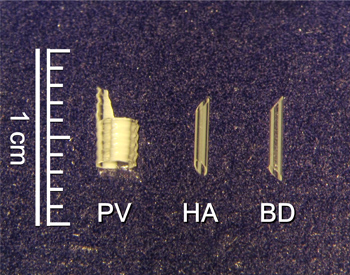 Figure 1. A cuff for the portal vein (PV) from a 14-gauge catheter, and stents for the hepatic artery (HA) and bile duct (BD) from 24-gauge catheters. 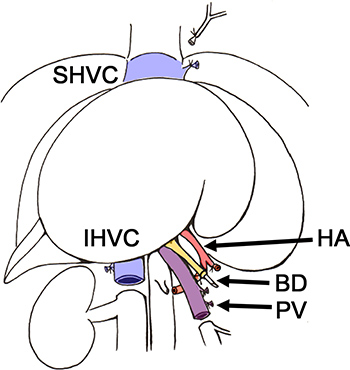 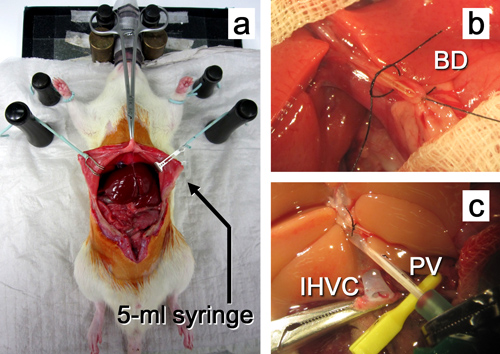 Figure 3. Donor operation. a. The rat is placed on a heating pad with a magnetic fixator retraction system. The abdomen is opened by a midline incision with bilateral extensions. b. Insertion of the stent into the bile duct. c. Perfusion of the liver through the portal vein. Abbreviations are explained in Figure 2. 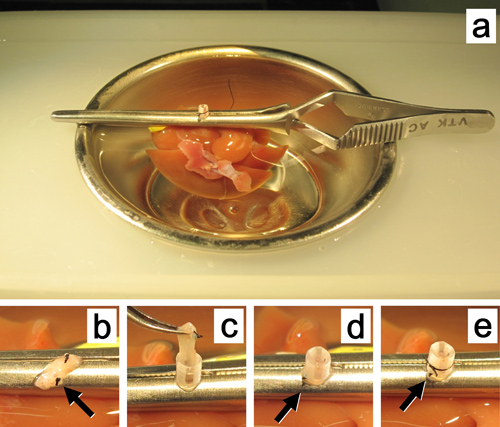 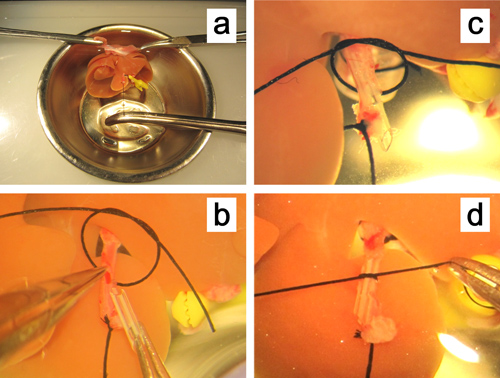 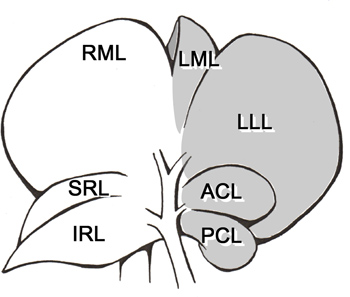 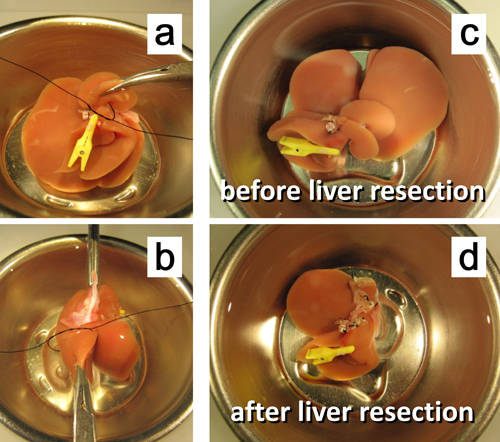 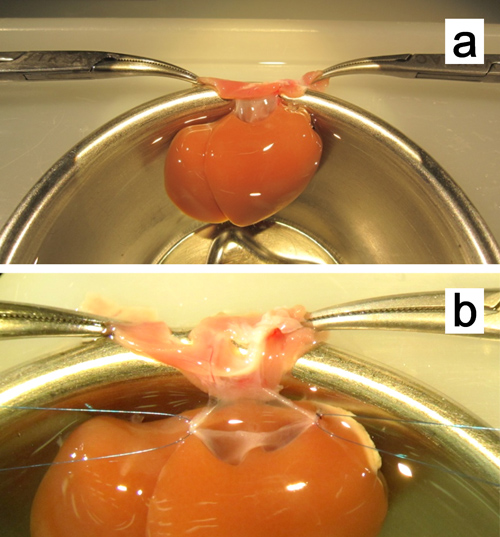 Figure 8. Ex vivo plasty of the suprahepatic vena cava. a. The liver is fixed by clamping both edges of the diaphragm with the mosquito forceps. b. Stay sutures with 7-0 polypropylene are attached at both corners. 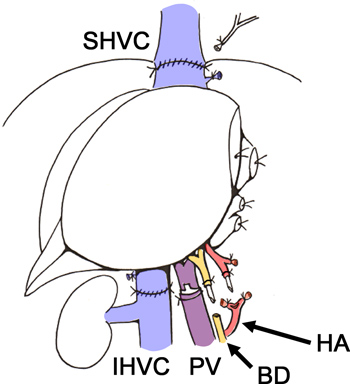 Figure 9. Schema of the graft implantation in the recipient rat. The reconstruction procedures are performed for the supra- and infrahepatic vena cava (SHVC and IHVC) with a 7-0 continuous suture, the portal vein (PV) by a cuff technique, and the hepatic artery (HA) and bile duct (BD) by a stent technique. 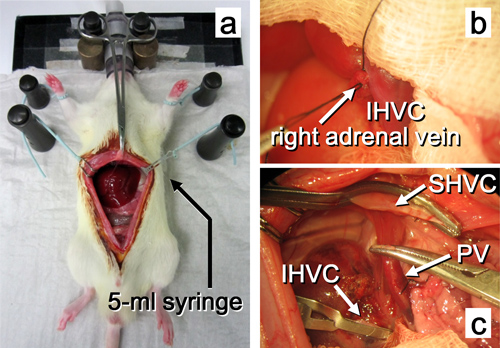 Figure 10. Recipient operation until the removal of the native liver. a. The abdomen is opened by a midline incision. b. The right adrenal vein is ligated. c. The native liver is excised. Abbreviations are explained in Figure 2. 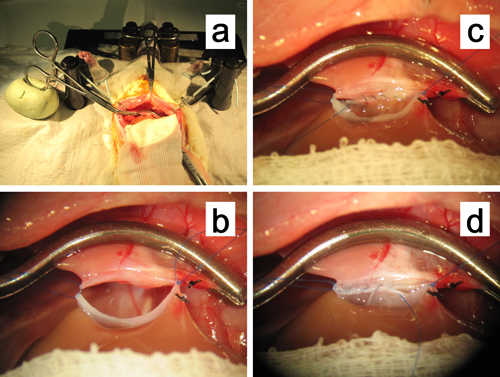 Figure 11. Anastomosis of the suprahepatic vena cava. a, b. The peripheral vascular clamp for the suprahepatic vena cava is fixed in a lump of oil-based clay. The stay sutures at both corners are maintained with gentle traction superiolaterally to widen the anastomosis. c. Continuous intraluminal suture of the posterior row in progress. d. Continuous suture of the anterior row in progress. 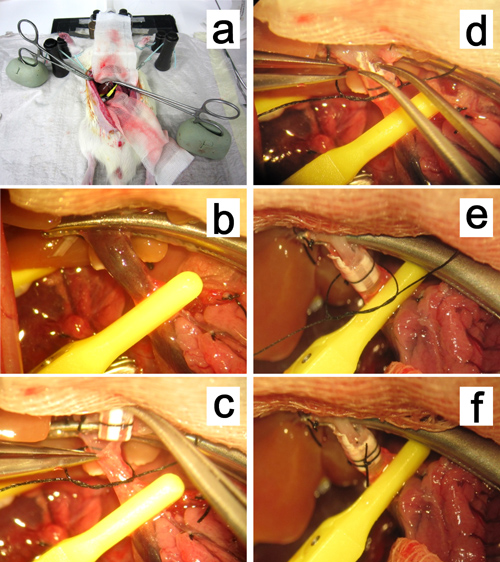 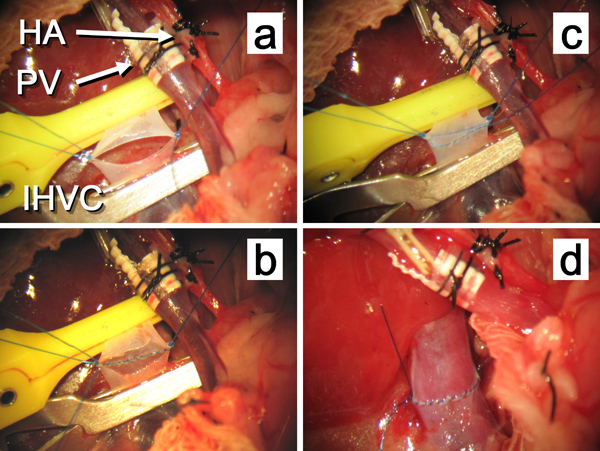 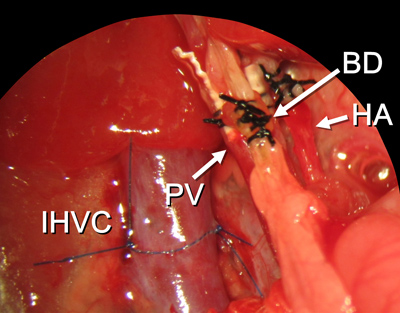 Figure 15. All the reconstruction procedures are finished. Abbreviations are explained in Figure 2. 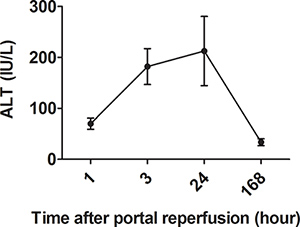 The first model of rat OLT was reported by Lee et al. in 1973 9, in which all vessels including the hepatic artery were reconstructed by a hand-sewn method and the extracorporeal portosystemic shunt was used. This model was technically complicated and difficult to perform. The next model was one without hepatic arterial reconstruction and the extracorporeal shunt, developed by the same authors 10 in 1975. Subsequently in 1979, Kamada et al. introduced the cuff anastomosis technique for the model without hepatic rearterialization 11. With these modifications, OLT in rats was simplified with a shortened anhepatic time in recipient operations and has been widely used as an accepted experimental model.

We perform a hand-sewn anastomosis for the reconstruction of the SHVC and IHVC. This method provides the anastomotic site with an optimal physiological condition, which leads to the reduced incidence of thrombosis 8, and is the best microsurgery simulation and training for surgeons. In addition, the anastomosis can be possible even with short vessel stumps. Concerning the anastomosis of IHVC, this method does not require a long IHVC on the graft side compared with the cuff anastomosis technique. Therefore, when the donor renal vein is dissected to make the graft IHVC long, this method is applicable to transplantation of a small graft that necessitates a long IHVC, such as a 30% graft that consists of right lateral and caudate lobes with a short intrahepatic vena cava without SHVC 2.

We described the representative results from the recipient rats in our model; the rats survived during the 7-day observation period without apparent complications. The model can be modified for different purposes of experiments by choosing the different settings, such as prolonged cold storage, prolonged warm ischemia that includes donation after cardiac death, and the usage of smaller liver grafts or grafts from experimental models of liver injury or diseases.

In our experience, there are three key factors throughout the procedures that can affect the survival after transplantation, the most reliable parameter for outcomes of rat OLT: the amount of blood loss; the operation time, especially clamping time of the portal vein and IHVC; and the adequacy of the reconstruction of each vessel, which could result in stenosis, thrombosis, or bleeding. In a training period of this model, most of the failures could probably be related to those factors. In this video article, we present step-by-step instructions for the surgical procedures for our rat model of partial OLT with hepatic arterial reconstruction. While a rat model of OLT is complicated and requires advanced microsurgical skills, this article provides plenty of practical information, which should serve as a good guide for the training and learning of this model. Learning this model efficiently is particularly important for shortening the learning period, reducing the number of animals and costs needed for practice, and later reproducing reliable results in experiments. This is in line with the 3Rs concept (replacement, reduction, and refinement) of animal experiments, which was postulated by Russell and Burch in 1959 25.

We have no conflicting interests to disclose. The rats are housed under specific-pathogen-free conditions according to the guidelines of the Federation for Laboratory Animal Science Associations (FELASA). All experiments were conducted in accordance with the German federal law regarding the protection of animals and "Guide for the Care and Use of Laboratory Animals" (National Institutes of Health publication No. 86-23, revised 1985).

The authors thank Pascal Paschenda and Mareike Schulz for their technical assistance. 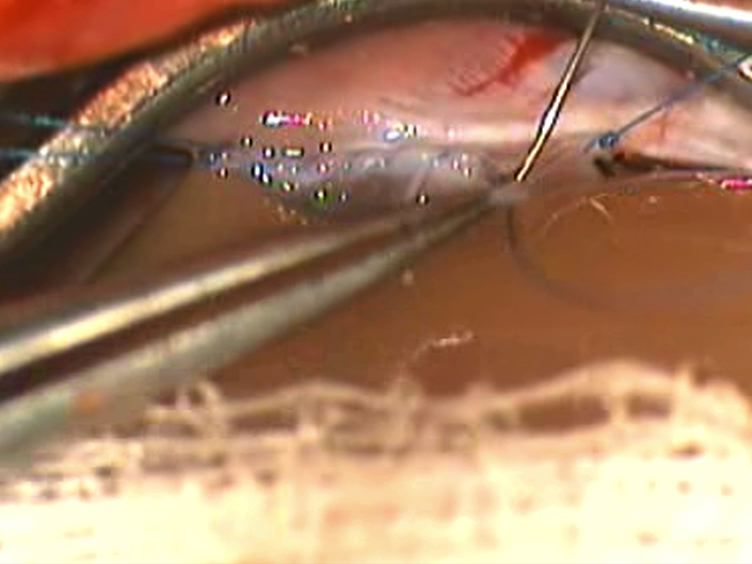