The following protocol provides techniques for encapsulating pancreatic β-cells in step-growth PEG-peptide hydrogels formed by thiol-ene photo-click reactions. This material platform not only offers a cytocompatible microenvironment for cell encapsulation, but also permits user-controlled rapid recovery of cell structures formed within the hydrogels.

Hydrogels are hydrophilic crosslinked polymers that provide a three-dimensional microenvironment with tissue-like elasticity and high permeability for culturing therapeutically relevant cells or tissues. Hydrogels prepared from poly(ethylene glycol) (PEG) derivatives are increasingly used for a variety of tissue engineering applications, in part due to their tunable and cytocompatible properties. In this protocol, we utilized thiol-ene step-growth photopolymerizations to fabricate PEG-peptide hydrogels for encapsulating pancreatic MIN6 b-cells. The gels were formed by 4-arm PEG-norbornene (PEG4NB) macromer and a chymotrypsin-sensitive peptide crosslinker (CGGYC). The hydrophilic and non-fouling nature of PEG offers a cytocompatible microenvironment for cell survival and proliferation in 3D, while the use of chymotrypsin-sensitive peptide sequence (CGGY↓C, arrow indicates enzyme cleavage site, while terminal cysteine residues were added for thiol-ene crosslinking) permits rapid recovery of cell constructs forming within the hydrogel. The following protocol elaborates techniques for: (1) Encapsulation of MIN6 β-cells in thiol-ene hydrogels; (2) Qualitative and quantitative cell viability assays to determine cell survival and proliferation; (3) Recovery of cell spheroids using chymotrypsin-mediated gel erosion; and (4) Structural and functional analysis of the recovered spheroids.

Hydrogels are hydrophilic crosslinked polymers with exceptional potential as scaffolding materials for repairing and regenerating tissues.1-3 The high water content of hydrogels permits easy diffusion of oxygen and exchange of nutrients and cellular metabolic products, all of which are crucial to maintaining cell viability. In addition, hydrogels are excellent carriers for controlled release and cell delivery due their high tunability.2 Synthetic hydrogels such as those prepared from poly(ethylene glycol) (PEG) are increasingly used in tissue engineering applications, largely due to their cytocompatibility, tissue-like elasticity, and high tunability in material physical and mechanical properties.4-6

Although a commonly used hydrogel platform, studies have shown that PEG diacrylate (PEGDA) hydrogels formed by chain-growth photopolymerizations have a tendency to damage encapsulated cells during network crosslinking and in situ cell encapsulation.7 The cellular damage was largely attributed to radical species generated by the photoinitiator molecules, which propagate through the vinyl groups on PEGDA to crosslink polymer chains into hydrogels. Unfortunately, these radical species also cause stresses and cellular damage during cell encapsulation, especially for radical-sensitive cells such as pancreatic β-cells.8-10 In order to obtain a higher mesh size for better diffusion and cell survival, higher molecular weights PEGDA are often used for cell encapsulation. This, however, compromises polymerization kinetics and causes sub-optimal gel biophysical properties.7,11,12 In addition to the above mentioned disadvantages, it is very difficult to recover cell structures from PEGDA hydrogels due to the heterogeneity and non-degradable nature of the crosslinked networks. While protease-sensitive peptides can be incorporated into PEG macromer backbone to render the otherwise inert PEGDA hydrogels sensitive to enzymatic cleavage, the conjugation often uses expensive reagents and the resulting networks still contain high degree of heterogeneity due to the nature of chain-growth polymerization.13-15

Previously, thiol-ene hydrogels formed by 4-arm PEG-norbornene (PEG4NB) macromer and bis-cysteine containing peptide crosslinkers, such as protease-sensitive peptides have been utilized for cell encapsulation.7,18 High tunability of PEG hydrogel networks offers a flexible and controllable 3D microenvironment for investigating cell survival and activity, while the use of protease-sensitive peptide sequence provides a mild way for recovery of cell constructs formed naturally within hydrogels. In this protocol we utilize step-growth photopolymerized thiol-ene hydrogels fabricated using 4-arm PEG-norbornene (PEG4NB) and a chymotrypsin-sensitive peptide crosslinker (CGGY↓C) for the encapsulation of MIN6 β-cells. This protocol systematically elaborates techniques for studying the survival, proliferation and spheroid formation of MIN6 β-cells in thiol-ene hydrogels. We further provide method for β-cell spheroid recovery and biological characterization of recovered spheroids.

A. Macromer and Peptide Synthesis

B. Material Preparation and Sterilization 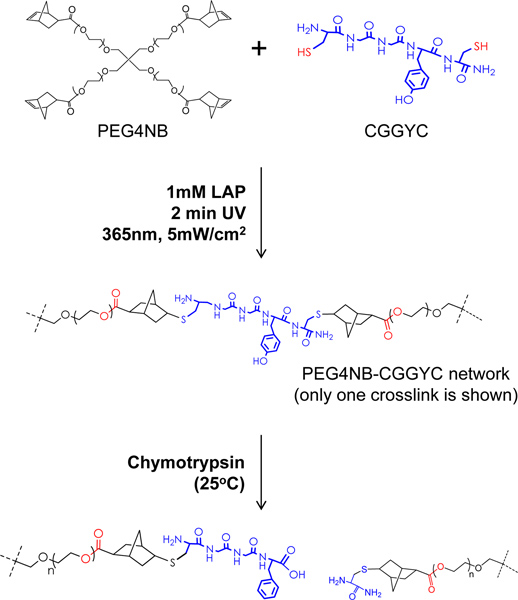 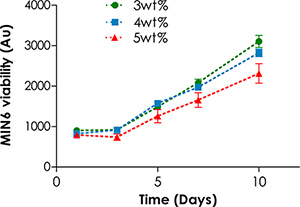 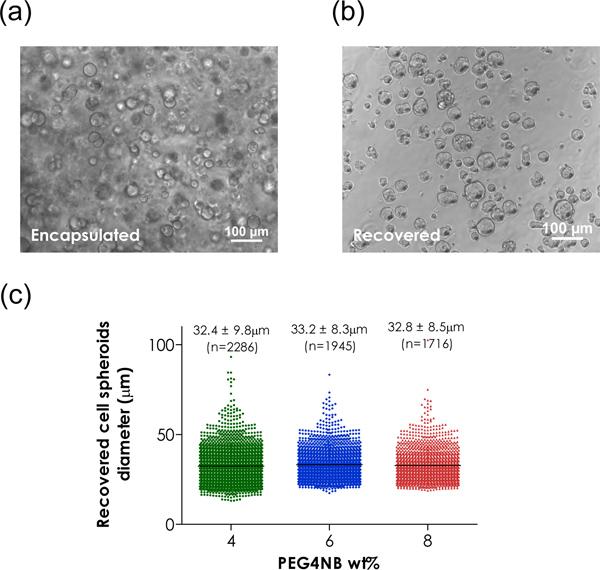 The described protocol presents details on easy encapsulation of cells in thiol-ene hydrogels formed by step-growth photopolymerization. While a stoichiometric ratio of 1:1 of norbornene to thiol functional groups was used in this protocol, the ratio can be adjusted depending on the experiments. In addition to a correct formulation, it is important to maintain homogeneity in the pre-polymer solution. In particular, use gentle pipetting to ensure that cells are well distributed in the pre-polymer solution in order to avoid clumping of cell and variation in gel properties. Although a polymerization time of 2 min was used for gel crosslinking, the gel point for thiol-ene hydrogels is less than 10 sec in most cell encapsulation-relevant formulations (e.g., gel point for 4 wt% PEG4NB/CGGYC hydrogel is 7 ± 2 sec and 5 wt% is 6 ± 1 sec). The rapid gelation of this hydrogel system swiftly locks the cells in place, resulting in better cell distribution in 3D compared to other photopolymerization schemes that take minutes or even hours to reach gel point.7,20

Additionally, β-cell spheroids naturally formed in thiol-ene hydrogels were recovered by chymotrypsin-mediated gel erosion. Chymotrypsin, however, is an enzyme in the trypsin family and high concentration or long incubation time of this enzyme may negatively affect cell-cell interactions or even disrupt the spheroid architecture during recovery. In order to avoid this potential limitation, hydrogels may be crosslinked by other thiolated substrates and gel erosion can still be achieved by suitable enzymes that do not cause adverse cell-cell interaction.

Overall, thiol-ene hydrogels provide a cytocompatible environment for promoting the proliferation of β-cells in 3D. This system may be used to culture and study the physiological behavior of various cell types in 3D. Furthermore, this system allows for facile recovery of cell constructs formed within the hydrogel matrix for further functional and biological characterizations. This diverse and cytocompatible hydrogel system provides gel platform for engineering complex 3D tissues for regenerative medicine application.

This project was funded by NIH (R21EB013717) and IUPUI OVCR (RSFG). The author thanks Ms. Han Shih for her technical assistance. 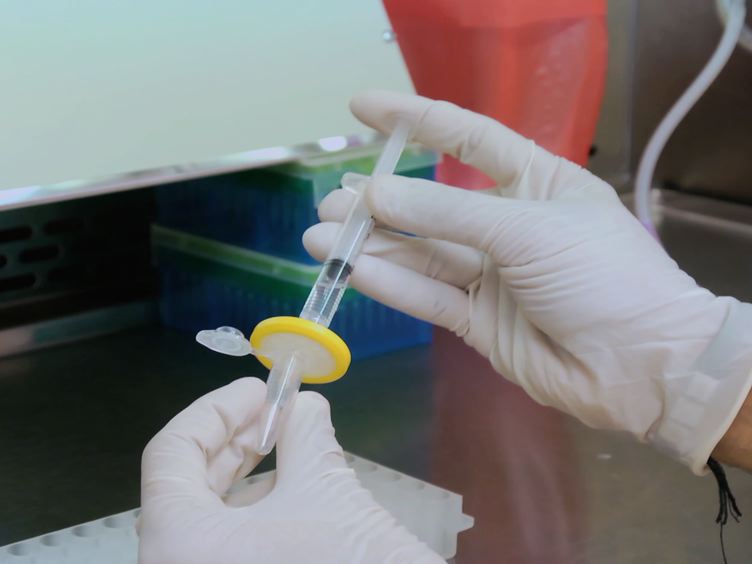