Cellular viability depends on timely and efficient management of protein misfolding. Here we describe a method for visualizing the different potential fates of a misfolded protein: refolding, degradation, or sequestration in inclusions. We demonstrate the use of a folding sensor, Ubc9ts, for monitoring proteostasis and aggregation quality control in live cells using 4D microscopy.

One of the key tasks of any living cell is maintaining the proper folding of newly synthesized proteins in the face of ever-changing environmental conditions and an intracellular environment that is tightly packed, sticky, and hazardous to protein stability1. The ability to dynamically balance protein production, folding and degradation demands highly-specialized quality control machinery, whose absolute necessity is observed best when it malfunctions. Diseases such as ALS, Alzheimer's, Parkinson's, and certain forms of Cystic Fibrosis have a direct link to protein folding quality control components2, and therefore future therapeutic development requires a basic understanding of underlying processes. Our experimental challenge is to understand how cells integrate damage signals and mount responses that are tailored to diverse circumstances.

The primary reason why protein misfolding represents an existential threat to the cell is the propensity of incorrectly folded proteins to aggregate, thus causing a global perturbation of the crowded and delicate intracellular folding environment1. The folding health, or "proteostasis," of the cellular proteome is maintained, even under the duress of aging, stress and oxidative damage, by the coordinated action of different mechanistic units in an elaborate quality control system3,4. A specialized machinery of molecular chaperones can bind non-native polypeptides and promote their folding into the native state1, target them for degradation by the ubiquitin-proteasome system5, or direct them to protective aggregation inclusions6-9.

Up until this point, the methodological paradigm of live-cell fluorescence microscopy has largely been to label proteins and track their locations in the cell at specific time-points and usually in two dimensions. As new technologies have begun to grant experimenters unprecedented access to the submicron scale in living cells, the dynamic architecture of the cytosol has come into view as a challenging new frontier for experimental characterization. We present a method for rapidly monitoring the 3D spatial distributions of multiple fluorescently labeled proteins in the yeast cytosol over time. 3D timelapse (4D imaging) is not merely a technical challenge; rather, it also facilitates a dramatic shift in the conceptual framework used to analyze cellular structure.

We utilize a cytosolic folding sensor protein in live yeast to visualize distinct fates for misfolded proteins in cellular aggregation quality control, using rapid 4D fluorescent imaging. The temperature sensitive mutant of the Ubc9 protein10-12 (Ubc9ts) is extremely effective both as a sensor of cellular proteostasis, and a physiological model for tracking aggregation quality control. As with most ts proteins, Ubc9ts is fully folded and functional at permissive temperatures due to active cellular chaperones. Above 30 °C, or when the cell faces misfolding stress, Ubc9ts misfolds and follows the fate of a native globular protein that has been misfolded due to mutation, heat denaturation, or oxidative damage. By fusing it to GFP or other fluorophores, it can be tracked in 3D as it forms Stress Foci, or is directed to JUNQ or IPOD. 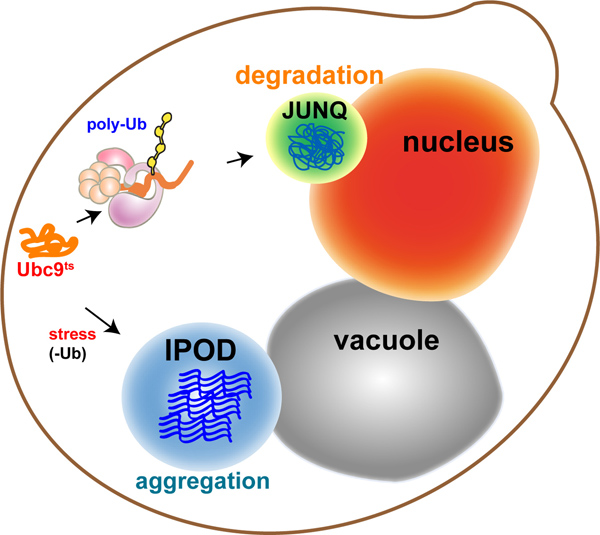 Figure 1. Model: Sub-cellular compartmentalization of misfolded proteins. Quality control machinery directs misfolded proteins into distinct compartments with distinct functions: Soluble proteins, targeted for degradation, undergo poly-ubiquitination and are sent to the Juxta-NuclearQuality control compartment (JUNQ). Insoluble proteins that can't be ubiquitinated are sent for protective sequestration to the InsolubleProteinDeposit (IPOD), adjacent to the vacuole, where they undergo active aggregation.

Figure 2. Modeling protein misfolding with GFP-Ubc9ts. Under normal conditions, GFP-Ubc9ts (green) is natively folded, and is localized diffusely in the nucleus and the cytosol. The nucleus is labeled by NLS-TFP (red). Expression of Ubc9ts was shut off by addition of 2% glucose before imaging in all experiments. Click here to view larger figure.

Our intuitions about biochemical processes derive from bench top experiments in which a well-mixed solution of reactants and products is allowed to reach equilibrium in a beaker. In such a setting, the concentration of a given chemical species may be expressed as a single number, which is the ratio of a molar quantity of molecules to a macroscopic volume. Much of what we know about protein structure and function derives from using methods that reflect the classic, bulk reaction picture: western blots, centrifugations, and spectrophotometric measurements carried out on extracts from homogenates of whole populations of cells.

As the technology we use to look at cells under magnification improves by leaps and bounds, it becomes ever clearer that the conditions in which most biochemical reactions take place in vivo bear only the slightest resemblance to those of the classic bench top scenario. Not only is the interior of the cell a densely packed environment, in which crowding effects substantially alter the activities of various reactants, it is also quite the opposite of well-mixed. This accounts for the frequent disparity between in vitro and in vivo efficiencies of a wide range of complex macromolecular reactions.

Nowhere are intuitions stemming from classical in vitro biochemical experiments more prone to mislead as in questions pertaining to the in vivo folding, misfolding, and aggregation of proteins. Whereas studies of protein chemistry in bulk reactions can treat the issue of folding for a given protein as a simple yes or no question, any attempt to track the dynamics of whole populations of macromolecules in a live cell must be sensitive to the whole distribution of possible conformational outcomes available to a polypeptide chain, and in particular to the risk of misfolding and aggregation. For example, we might examine a bulk cell lysate of an aggregating protein by western blotting, and determine that the protein is mostly insoluble and not ubiquitinated. However, in the living cell a discrete sub-population of the protein, difficult to detect when averaging over many cells, may be soluble and ubiquitinated in a particular compartment where the local concentration of the species is extremely high. The latter scenario may have more important consequences for the viability of the cell than the larger bulk sub-population. Furthermore, whereas chaperones display a variety of pleiotropic behaviors and functions in vitro, it is becoming evident that in the cell their discrete functions are spatially and temporally confined.

In the newly emerging paradigm for understanding biochemistry, concentration becomes a variable property of each specific nano-environment in the cell, and the molecular events that underlie biological processes must be assayed not only in time, but also in space. The 4D imaging approach presented here enables sensitive modeling of protein misfolding in live cells, though it can be used to study any number of other biological processes and how they are regulated in space, time, and following changes in environmental conditions. In this paper we use the Ubc9ts folding sensor, which effectively demonstrates the stages and options for dealing with the onset of protein aggregation in the cytosol. In addition to illustrating the cell biology of aggregation quality control, this approach can serve as a powerful tool for deciphering the effect of specific perturbations or genetic mutations on proteostasis (for example Ubc9ts can be used to measure protein folding stress in response to oxidation, the expression of a toxic aggregate, or mutations in the quality control pathway).

4D imaging is also essential for accurately determining protein localization or colocalization between two different proteins, and for detecting phenomena which maybe be transient but important. For example, especially in a small spherical organism such as yeast, it may appear to be the case that a structure or aggregate has juxtanuclear localization, whereas 4D imaging may reveal that this is simply an artifact of the angle of inspection.

In the example experiment we present here, we demonstrate the use of a model misfolded protein, Ubc9ts, to follow aggregation quality control over time and space in the cytosol. At the permissive temperature, Ubc9ts is folded and diffused in the nucleus and cytosol. Upon heat-induced misfolding, it initially forms rapidly diffusing small aggregate Stress Foci that are processed for proteasomal degradation. When the proteasome is partially inhibited, these Stress Foci are converted into JUNQ and IPOD inclusions over the course of about 2 hr. If ubiquitin-mediated degradation is not available as a quality control option, Ubc9ts is immediately re-routed to the IPOD inclusion for protective aggregation. These tools offer incredible opportunities to discover novel genetic factors involved in aggregation quality control, and to explore their spatial and temporal regulation in the cell. 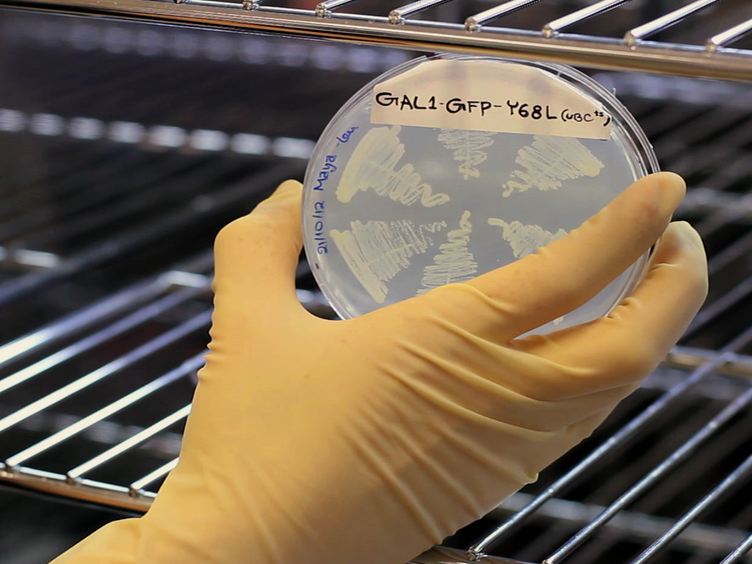