The recent development of neuroscience tools that combine genetics and optics, termed "optogenetics", enables control over neural circuit activity with an unprecedented level of spatial and temporal resolution. Here we provide a protocol for integrating in vivo recording with optogenetic manipulation of genetically-defined subsets of prefrontal cortical and subicular pyramidal neurons.

Optogenetic methods have emerged as a powerful tool for elucidating neural circuit activity underlying a diverse set of behaviors across a broad range of species. Optogenetic tools of microbial origin consist of light-sensitive membrane proteins that are able to activate (e.g., channelrhodopsin-2, ChR2) or silence (e.g., halorhodopsin, NpHR) neural activity ingenetically-defined cell types over behaviorally-relevant timescales. We first demonstrate a simple approach for adeno-associated virus-mediated delivery of ChR2 and NpHR transgenes to the dorsal subiculum and prelimbic region of the prefrontal cortex in rat. Because ChR2 and NpHR are genetically targetable, we describe the use of this technology to control the electrical activity of specific populations of neurons (i.e., pyramidal neurons) embedded in heterogeneous tissue with high temporal precision. We describe herein the hardware, custom software user interface, and procedures that allow for simultaneous light delivery and electrical recording from transduced pyramidal neurons in an anesthetized in vivo preparation. These light-responsive tools provide the opportunity for identifying the causal contributions of different cell types to information processing and behavior.

The ability to activate or silence a specific cell type within a neural circuit in a temporally precise fashion is critical for understanding how neural circuits process different types of information underlying emotion and cognition. Experimental control over intact neural activity has employed loss-/gain-of-function tools (e.g., electrical stimulation, pharmacological modulation, lesion) that do not provide the required selectively for controlling specific populations of neurons, either on a temporal or spatial scale. Directly addressing these technological challenges, the development and application of genetically-encodable light-sensitive tools has enabled neuroscientists to control the electrical activity of select cell types during well-defined behavioral events. Many of these light-sensitive proteins are of microbial origin, with the light-gated cation channel, channelrhodopsin-2 (ChR2) 1, and the light-driven chloride pump, halorhodopsin (NpHR) 2,3, in widespread use.

A major advantage of optogenetics is the ability to genetically-target specific cell populations in heterogeneous brain regions and the technique has been successfully applied to a number of model organisms (invertebrates to nonhuman primates) 4-6. Many optogenetic transgenic animals have been generated and are commercially available 7,8, however establishing transgenic lines can be labor intensive and cost prohibitive. Here we describe a protocol for virally-mediated delivery of ChR2 and NpHR genes under the CaMKIIα promoter in rat prelimbic cortex and dorsal subiculum using a recombinant adeno-associated virus (AAV) vector. Within the forebrain, CaMKIIα expression is exclusive to glutamatergic pyramidal neurons 9. AAV is commonly used for basic research due to its relative ease of production and lack of pathogenicity, as well as the strong and persistent transgene expression that has been achieved with these vectors 10. Additionally we outline the steps and hardware for simultaneous light delivery and recording in anesthetized head-fixed rats.

3. Light Delivery and In vivo Recording of ChR2 or NpHR-expressing Neurons

Figure 2 shows the custom optrode consisting of a tungsten electrode attached to an optical fiber. An optical fiber is fixed to the electrode using thin suture thread at three points. If needed, super glue can be used to adhere them. However, avoid permanently fixing the optical fiber to the electrode because although the electrode may be reused several times, light transmission through the fiber will degrade with repeated use and should be cleaved and cleaned or replaced with every insertion into the brain.

Figure 5 shows the result of repeated ChR2 stimulation of a rat prelimbic pyramidal neuron. Blue light pulse (10 msec) was delivered at 20 Hz for 5 sec (100 pulses total). Voltage traces of the light-evoked spiking were repeatedly acquired every 2 min during a 2 hr recording session (61 repetitions total). Even when using this repetitive stimulation protocol, ChR2 induced stable and robust spiking in response to the light delivery. 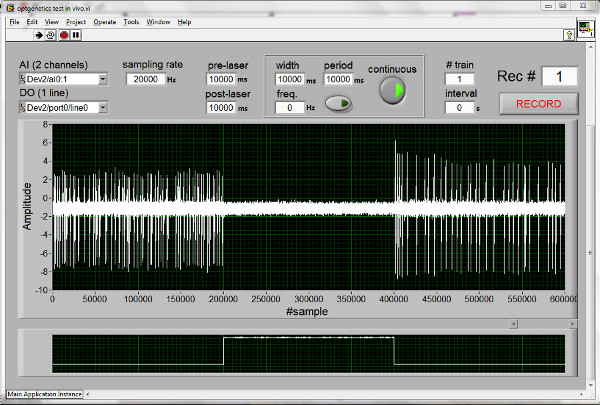 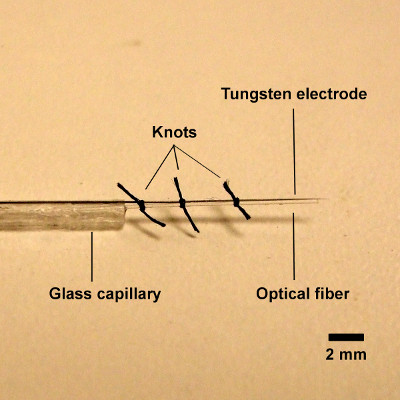 Figure 2. High power image of custom optrode. An optical fiber is inserted into glass capillary tube attached to a tungsten electrode and fixed to the electrode using suture thread. The center-to-center distance between the electrode tip and the fiber tip is approximately 500 μm. 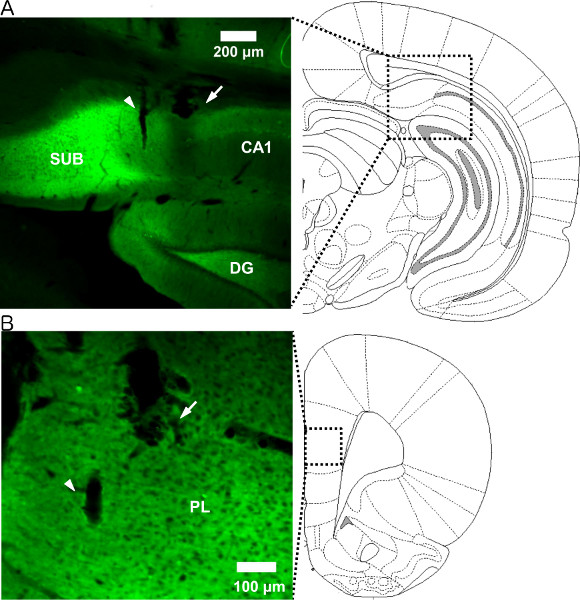 Figure 3. Viral expression and optrode placement. (Left) Photographs show representative NpHR expression in dorsal subiculum (A) and ChR2 expression in prelimbic cortex (B). (Right) Schematic that represents the location where each photograph was taken. The arrowhead and arrow in each photograph indicate the location of the tungsten electrode and optical fiber, respectively. SUB: subiculum, DG: dentate gyrus, PL: prelimbic cortex. Click here to view larger figure. 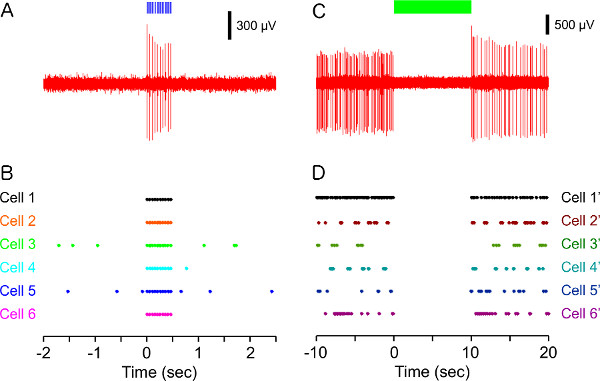 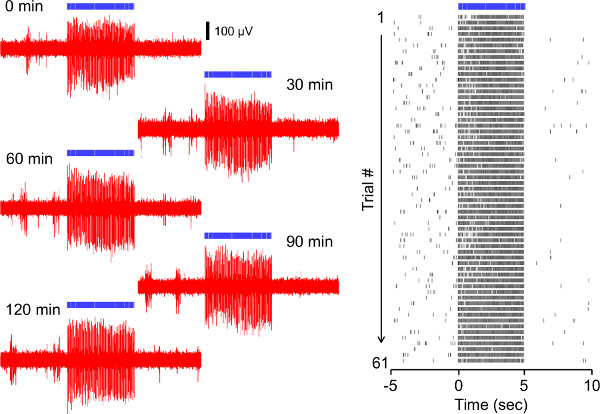 Figure 5. Repetitive 20 Hz ChR2-driven spiking of a rat prelimbic pyramidal neuron in vivo. (A) Voltage traces of the light-evoked spiking acquired at the time points 0, 30, 60, 90, 120 min after the beginning of the recordings. (B) Raster plot showing all 61 repetitions (2 min inter-trial interval, 120 min total) of the light-induced activation. Each unit activity is plotted as a dot. Click here to view larger figure. 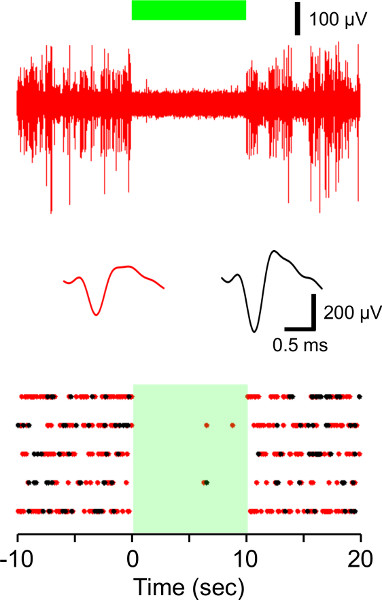 Figure 6. In vivo electrophysiological recordings from NpHR-transduced rat dorsal subiculum. (A) Example trace showing that 10 sec continuous 532 nm illumination (green bar) of the dorsal subiculum expressing NpHR eliminates spontaneous activity. (B) Average waveforms of the two recorded units from the above trace. The amplitude threshold was used for identifying two distinct neurons. (C) Raster plot showing five repetitions of NpHR-induced silencing of these units. Each unit activity is plotted as a dot. 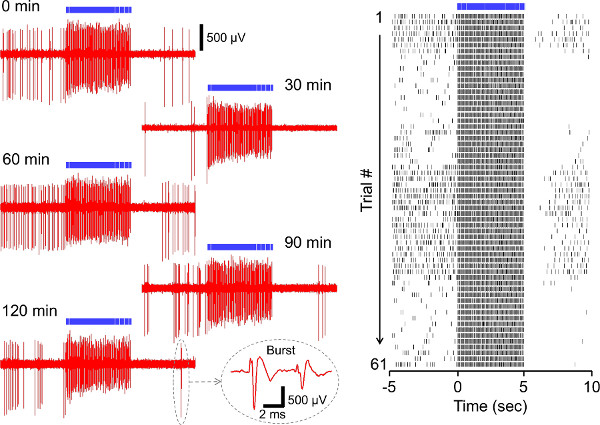 Figure 7. Repetitive 20 Hz CR2-driven spiking of a rat dorsal subicular neuron in vivo. (A) Voltage traces of the light-evoked spiking acquired at the time points 0, 30, 60, 90, 120 min after the beginning of the recordings. Inset: typical bursting activity of this cell. (B) Raster plot showing all 61 repetitions (2 min inter-trial interval, 120 min total) of the light-induced activation. Each unit activity is plotted as a dot. Click here to view larger figure.

A wide array of techniques are available for genetically-targeting microbial opsin genes to discrete brain regions in rodents. Viral gene delivery provides a relatively inexpensive and quick approach for mediating ChR2 and NpHR expression with cell-type specificity. AAV vector systems are a common choice for use in optogenetic experiments due to high production titers that remain stable during storage, its lack of pathogenicity, and its ability to produce long-term gene expression 10. Many of the opsin constructs with cell-type specific promoters are commercially available in a variety of AAV serotypes from vector core facilities such as the University of Pennsylvania (http://www.med.upenn.edu/gtp/vectorcore) or the University of North Carolina at Chapel Hill (http://genetherapy.unc.edu). One drawback to AAV technology is the limited packaging capacity (~4.7 kb), which places a restriction on the transgene cassette size that can be used for cell-specific targeting. As an alternative, lentiviral vectors, which have a larger packaging capacity, are able to accommodate opsin targeting under the control of larger promoter sequences.

The use of an optrode allows for reliable detection of electrophysiological signals in combination with temporally-precise light delivery. As described above, however, sufficient care is needed in its construction. Since the cleaved optical fiber is fragile, tying the suture thread too tightly may cause the fiber to break. Even though the optrode can be used for multiple recordings, the electrode and optical fiber should be cleaned (or manually cleaved in the case of the optical fiber bare end) prior to insertion because the impedance of the electrode and quality of the delivered light will degrade with repeated use.

During electrophysiological recordings it is important that the optrode be advanced slowly. The optrode used here has approximately 350 μm thickness (tungsten electrode: 125 μm; core of optic fiber: 200 μm) and lowering it fast could lead to movement of brain tissue. Light-induced artifacts also might be considered with particular recording and light delivery set-ups 11-12. Although we found no light-induced artifact in our experimental condition, recordings outside the transduced brain area can potentially be used as a control for light artifacts. Another consideration during the recording process is the required light intensity for observing changes in ChR2- or NpHR-expressing neurons, especially for long duration recordings. Strong laser intensity and long laser illumination could result in the tissue damage and/or a decreased response to subsequent delivered light 12-13. For behavioral experimentation the use of a control viral vector is required for eliminating any effect due to heat delivered from the fiber. For many of the commercially available optogenetic constructs there are complementary control constructs in which the opsin gene sequence has been removed.

It should be noted that engineered ChR2 variants with improved properties and kinetics have been developed along with other silencing opsins that may be better suited for certain experimental questions 14-15. For instance, a new ChR2 variant established via targeted mutagenesis, termed "ChETA", can drive high-fidelity neuronal spiking at frequencies (up to at least 200 Hz) above that of the original ChR2 14.

The combination of in vivo light delivery and simultaneous recording of neuronal responses is a critical step in establishing causal relationships between patterned activity in genetically-targeted cell populations and corresponding time-locked behavioral events. The procedures and hardware outlined here provide a straightforward approach for implementing optogenetics for in vivo head-fixed recordings in rodents. 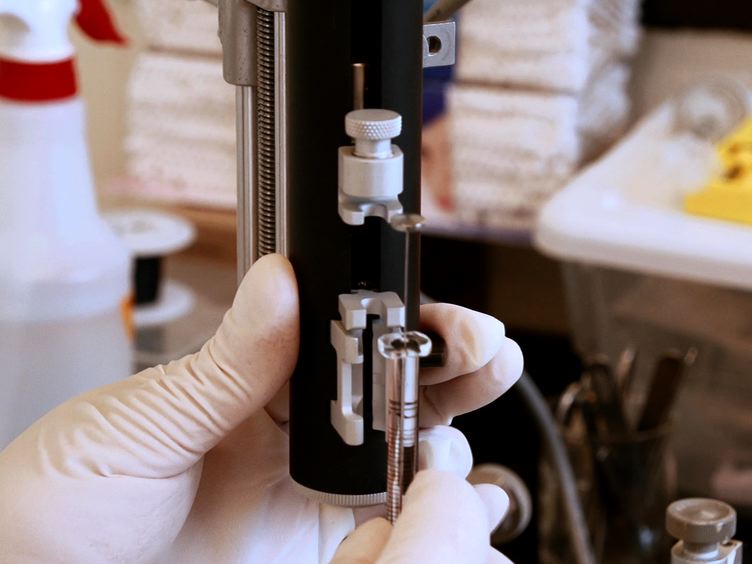