Viral vectors allow for targeted gene manipulation. We demonstrate a method for conditional gene expression or ablation in the mouse spinal cord, using stereotaxic injection of a viral vector into the dorsal horn, a prominent site of synaptic contact between primary somatosensory afferents and neurons of the central nervous system.

Intraparenchymal injection of a viral vector enables conditional gene manipulation in distinct populations of neurons or particular regions of the central nervous system. We demonstrate a stereotaxic injection technique that allows targeted gene expression or silencing in the dorsal horn of the mouse spinal cord. The surgical procedure is brief. It requires laminectomy of a single vertebra, providing for quick recovery of the animal and unimpaired motility of the spine. Controlled injection of a small vector suspension volume at low speed and use of a microsyringe with beveled glass cannula minimize the tissue lesion. The local immune response to the vector depends on the intrinsic properties of the virus employed; in our experience, it is minor and short-lived when a recombinant adeno-associated virus is used. A reporter gene such as enhanced green fluorescent protein facilitates monitoring spatial distribution of the vector, and the efficacy and cellular specificity of the transfection.

Advanced technologies of conditional gene manipulation in the mouse enable multifaceted approaches to the exploration of synaptic pathways and functional connections in the central nervous system. Transgenes may be regulated by small-molecule effectors such as doxycycline acting on a tetracycline-controlled transactivator, which can be designed to function as a repressor or an activator of gene transcription, or tamoxifen recognizing a mutated ligand-binding domain of the estrogen receptor 1. Irreversible transgene modification is commonly achieved by deoxyribonucleic acid (DNA) recombinases. Cre (causes recombination) and Flp (flippase recombination enzyme) catalyze the excision, inversion or translocation of DNA fragments that are flanked by loxP (locus of crossing x over, P1) or Frt (flippase recognition target) sites, respectively 1. Applications include gene activation or silencing and inducible ribonucleic acid (RNA) interference 2. Conditional expression of fluorescent or enzymatic reporters such as β-galactosidase or alkaline phosphatase can be used to label neurons and examine their topical organization and connectivity 3. Large-scale mutagenesis projects in North America (http://www.norcomm.org/index.htm) and Europe (http://www.knockoutmouse.org/about/eucomm) are producing libraries of mouse embryonic stem cell clones with conditional gene targets and traps that will eventually cover the entire mouse genome. Mice generated from these clones may be crossed with an expanding number of mouse lines that express DNA recombinases under promoters or loci specific to a particular population of neurons for selective gene manipulation (http://nagy.mshri.on.ca/cre_new/index.php).

However, restricting gene manipulation to distinct populations of neurons or particular regions of interest may not be achieved by genetic targeting alone if a promoter specific to the neuron population of interest is not known or not expressed by all neurons in the region of interest. In the spinal cord, experimental designs may require spatial restriction of the gene manipulation to one or two craniocaudal segments. Stereotaxic injection of a viral vector that expresses Cre or Flp allows limiting gene recombination to regions in the spinal cord of mice in which DNA fragments are flanked by loxP or Frt sites, so-called floxed or flrted alleles. Unlike constitutive DNA rearrangement, which would result from crossbreeding the animals with recombinase expressing mice, this strategy also provides temporal control over gene activation or silencing. Viral vectors encoding floxed or flirted transgenes offer a reverse option of gene manipulation in mice expressing the corresponding recombinase downstream of a neuron-specific promoter. Several recombinant vectors with affinity to neurons are available 4. High-capacity (gutless) adenovirus, adeno-associated virus, herpes simplex virus and lentivirus are commonly used neurotropic vectors. Selecting the appropriate virus for a research question is a crucial part of the experimental design. Size of the transgene, delivery route, specificity of the infection to neurons as opposed to glial cells, infection efficacy, inflammatory and toxic side effects need to be considered 4.

Here we describe the stereotaxic injection of a viral vector into the dorsal horn of the spinal cord, a technique that we employ for conditional gene regulation in our research on the neurobiology of pain. The dorsal horn receives afferent input from primary somatosensory neurons including nociceptive neurons. Local interneurons process the information before projection neurons convey it from the dorsal horn to the brain 5. We demonstrate the infection of dorsal horn neurons at spinal segmental level L4 with a neurotropic recombinant adeno-associated virus (rAAV) that expresses enhanced green fluorescent protein (eGfp) under a constitutively active cytomegalovirus promoter.

The surgical procedure described has been approved by the Institutional Animal Care and Use Committee (IACUC) of Columbia University.

Successful transfection yields robust gene expression in neurons of the injected dorsal horn (Figure 1), sparing the dorsal horn of the contralateral side, the ventral horn and the dorsal root ganglia. 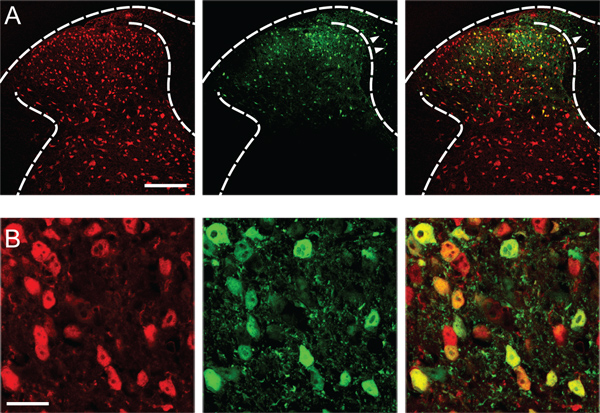 Figure 1. Transfection of dorsal horn neurons. (A) Expression of the fluorescent reporter eGfp (green) in the left dorsal horn of the L4 spinal cord, two weeks after the stereotaxic injection of rAAV-eGfp (serotype AAV2/8, 109 genome copies/μl). Neurons were immunostained for neuronal nuclei protein (NeuN, red). Arrow heads point to scattered transfected glial cells in the dorsal column. Scale bar, 150 μm. (B) Approximately 80% of neurons in the medial dorsal horn were infected. Scale bar, 20 μm. A monoclonal antibody against NeuN (EMD Millipore) was used at a dilution of 1:2,000 for the immunostaining.

Stereotaxic vector injection allows targeting spinal cord neurons for applications such as neuronal network mapping based on transsynaptic virus spreading 6,7 or optogenetic dissection 8, axon guidance during regeneration from injury 9,10, or gene therapy for the prevention or treatment of neurodegeneration 11,12. Viral vectors have been used for gene manipulation in the spinal cord to study somatosensory, motor and autonomic pathways 9,10,13-15. The mouse is the model organism most widely used in studies involving stereotaxic injection of a viral vector into the brain or the spinal cord, but the technique has been employed in other species including nonhuman primates 16.

Stereotaxic vector injection into the mouse spinal cord is safe; the surgical procedure described here requires a single laminectomy at the injection site so that the animal recovers without instability in its spine movements. Injection and slow removal of the cannula are complete within 10 min, the entire procedure including skin preparation and wound closure lasts approximately 40 min. We provide postsurgical anesthesia for 72 hr with carprofen, a nonsteroidal anti-inflammatory analgesic drug.

To minimize tissue trauma, we employ pulled glass cannulas with a tip diameter of 40 μm. A sharp beveled cannula tip eases insertion into the spinal cord, justifying the investment in a micropipette grinder. Use of a grinder also allows maintaining a consistent bevel angle in each experiment, reducing variation of the injection results. We prefer automated control of the injection speed over manual dispensation 17 for an even distribution of the virus particle suspension in the dorsal horn and to reduce the risk of an injection error. Equally critical is a slow extraction of the cannula, which should be initiated 2-5 min after completing the injection to avoid drawing the virus suspension back up and causing an extraspinal spill.

Extent and distribution of the intraspinal transfection depend on the injected particle dose and intrinsic properties of the viral vector such as serotype and infection efficacy. The optimal particle dilution has to be determined empirically for each virus and serotype and may vary between different batches of the same virus. Efficacy of both infection and DNA transduction may also differ depending on the targeted population of neurons 18,19. AAV achieves gene transfer in neurons without pathogenic and minimal immune side effects 20. In our experience, the infection of dorsal horn neurons is complete within 1-2 weeks and stable. We have observed minor microglial responses at injection sites but these resolved within one week.

We recommend comparing different serotypes of vectors that express a reporter gene such as eGfp to evaluate transfection rates, determine the time intervals between injection and stable transfection and establish whether the infection is limited to neurons. Specificity will depend on the cell tropism of the vector, the transfected gene and its promoter. Investigators studying somatosensory pathways should also examine dorsal root ganglion neurons for a potential expression of the reporter gene, which may result from infection of these neurons at their central terminals in the dorsal horn or from contamination of the cerebrospinal fluid 19.

In the United States, the use of viral vectors for gene manipulation is regulated by the NIH Guidelines for Research Involving Recombinant DNA Molecules (http://oba.od.nih.gov/rdna/nih_guidelines_oba.html). These Guidelines stipulate requirements for investigator training, personal protection, viral vector containment, decontamination, disposal of contaminated materials such as used syringes and cannulas, and animal housing after the injection. Investigators should work with their local IACUC or equivalent body of institutional oversight to determine the rules and regulations that apply to their research.

We thank Bakhos A. Tannous, Ph.D., Director of Vector Development and Production in the Neuroscience Center of Massachusetts General Hospital, Charlestown, Massachusetts, for providing us with the rAAV-eGfp vector, and John Whang for technical assistance. This work was supported by grant R01 NS050408 (to J.S.) from the National Institute of Neurological Disorders and Stroke. 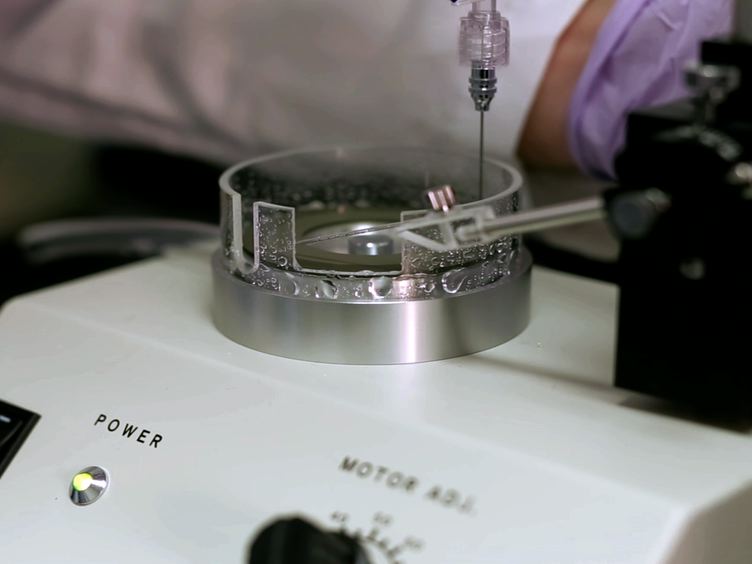